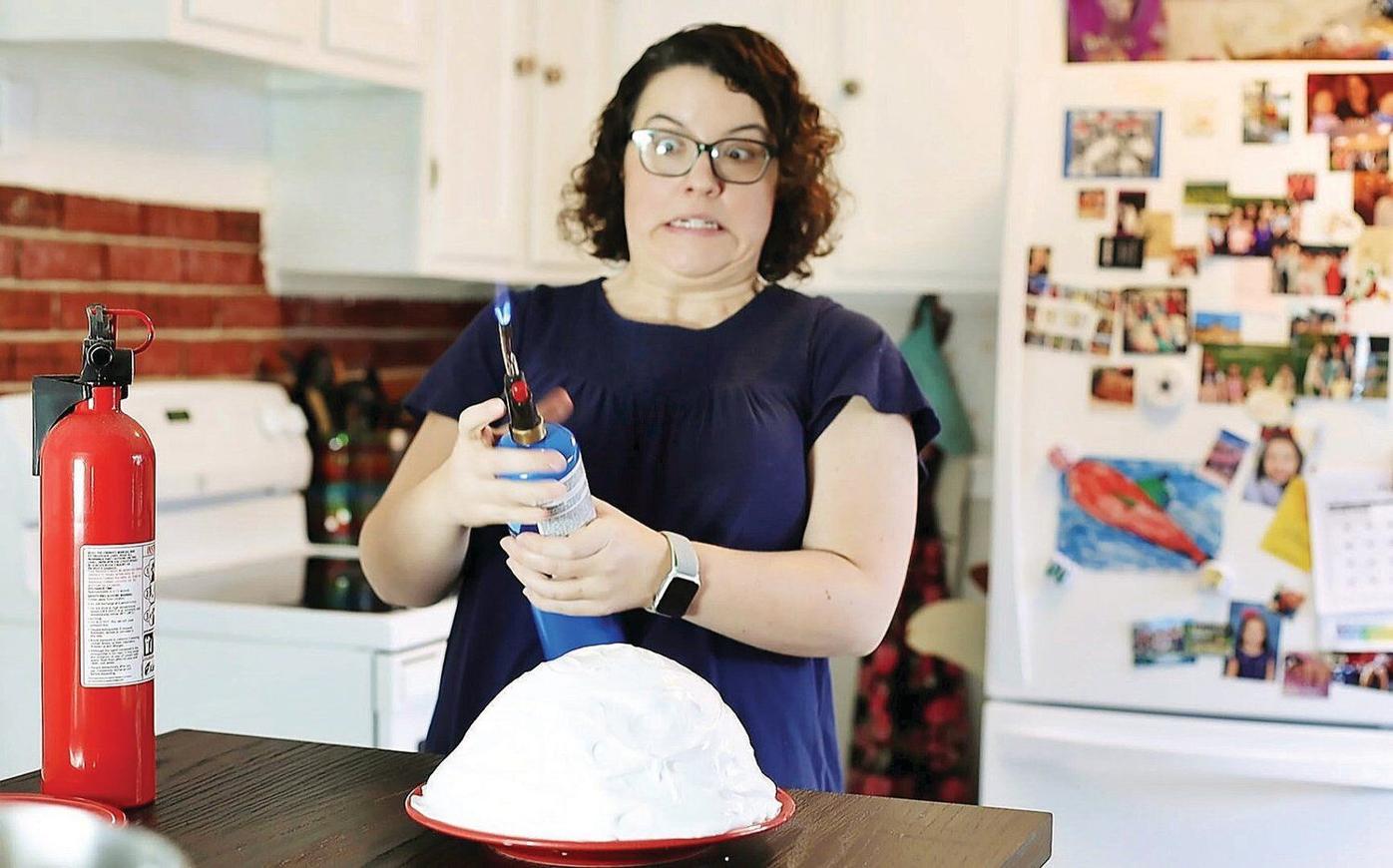 Managing Editor of Features Lindsey Hollenbaugh starts the blowtorch to brulee the outside of her Baked Alaska. A fire hydrant was smartly kept close by. 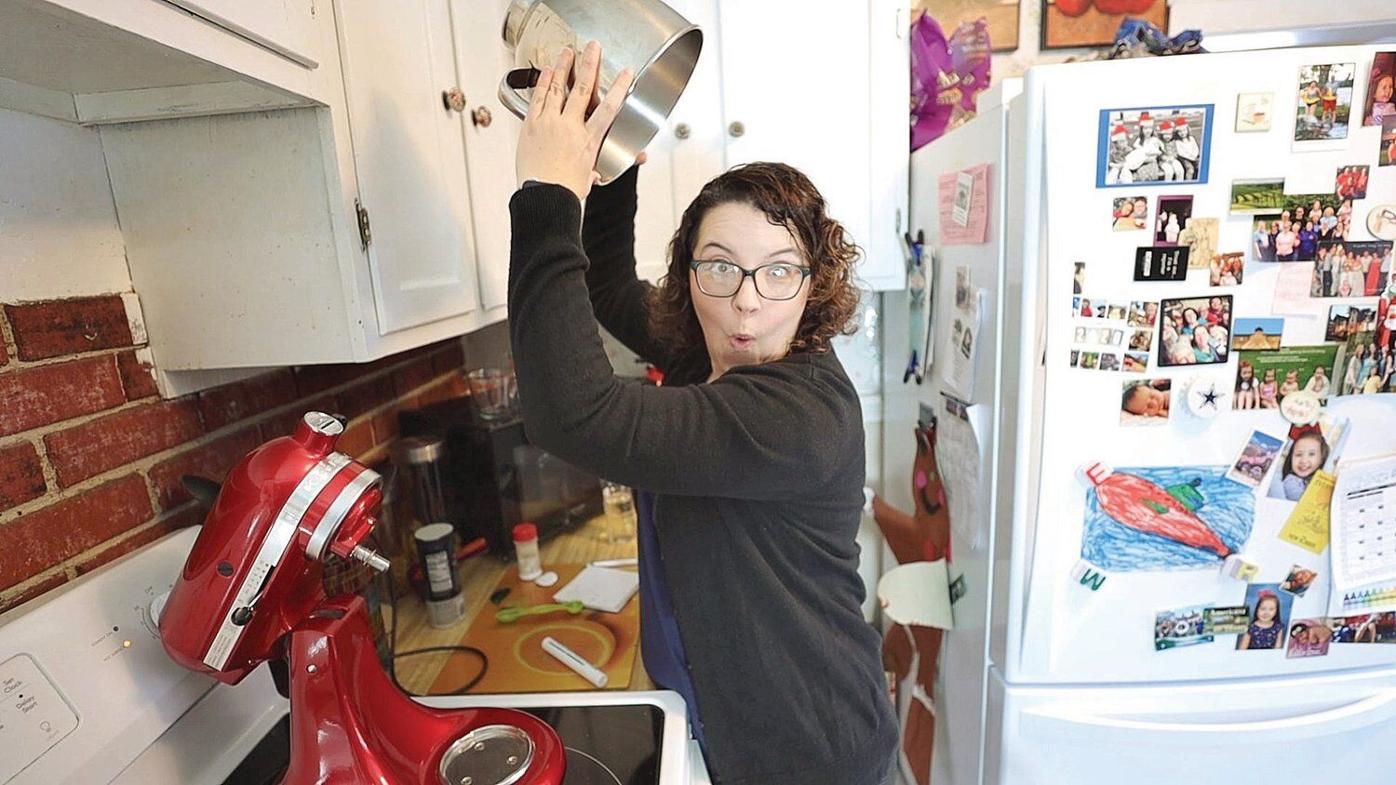 Hollenbaugh uses the non-scientific method of hold-it-over-your-head to see if the meringue is stiff enough. 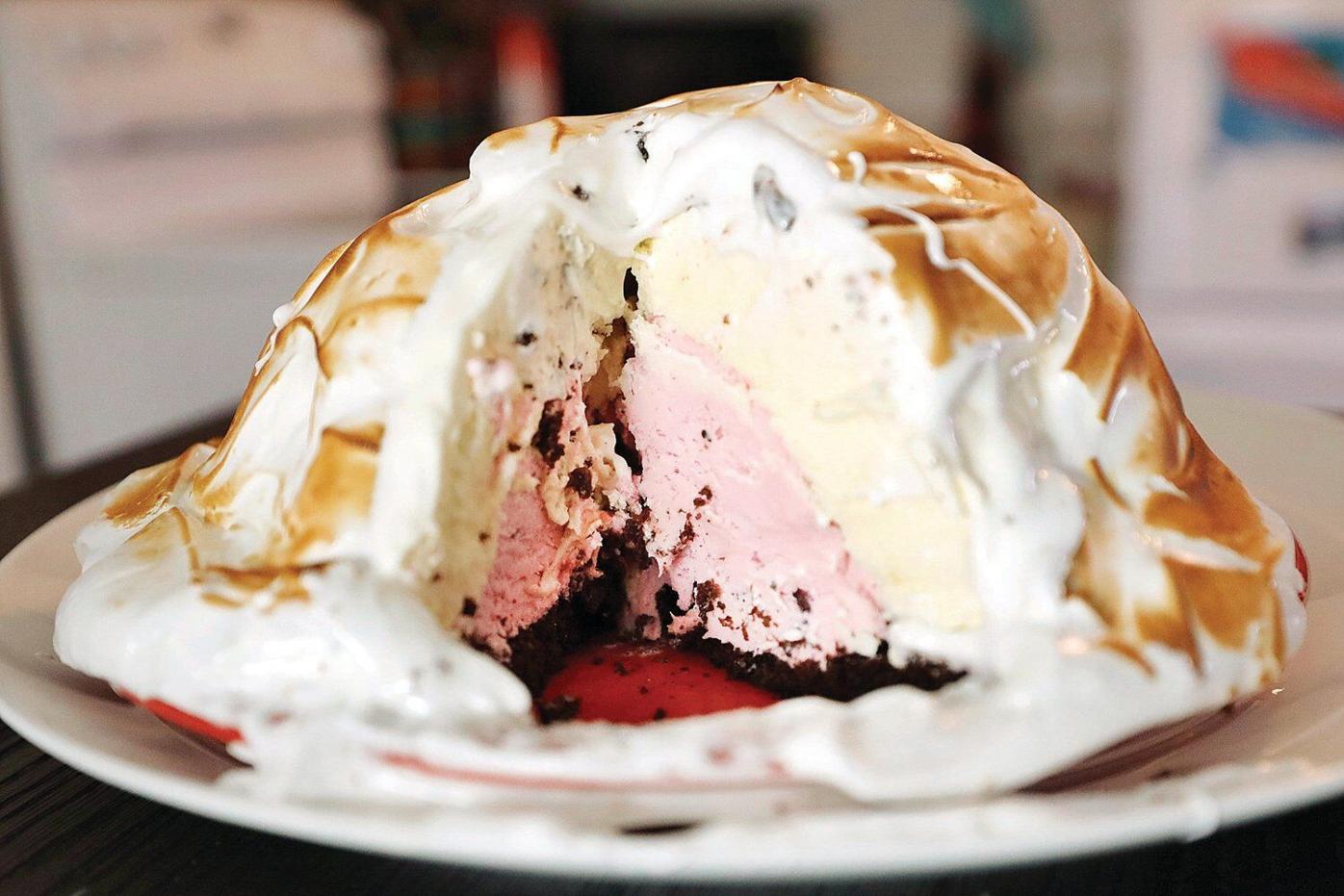 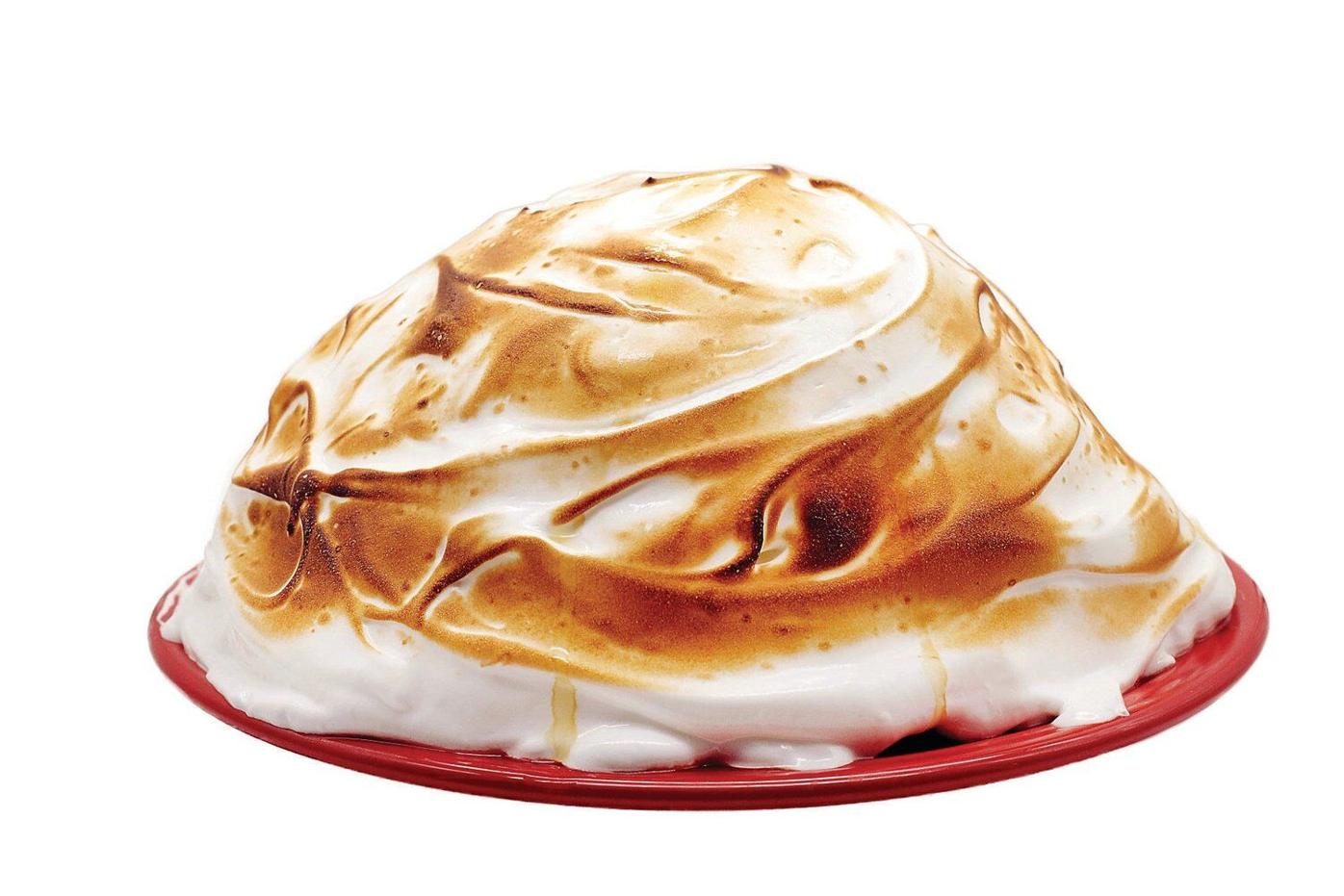 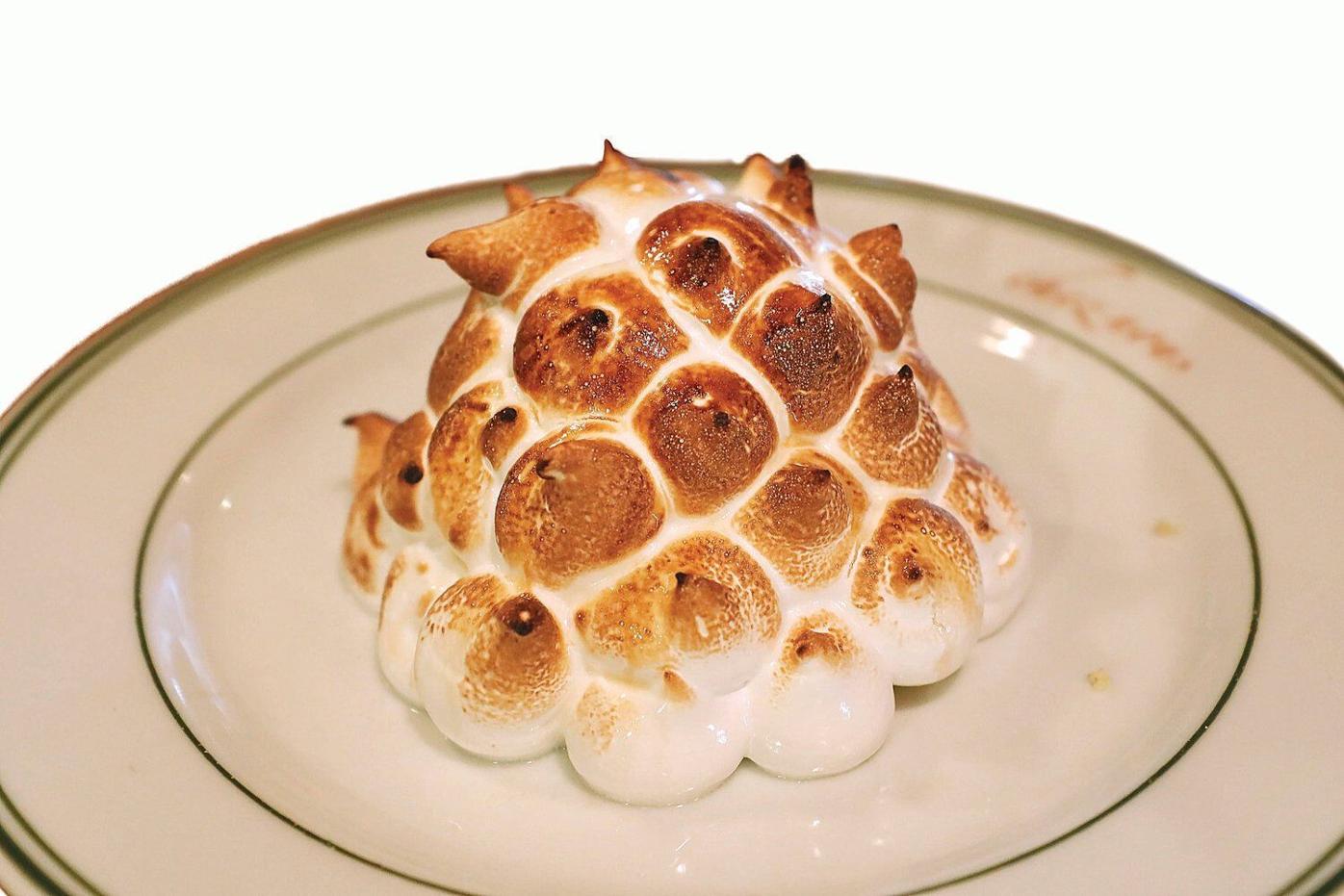 A Baked Alaska made by Rachel Portnoy at Chez Nous Bistro in Lee. 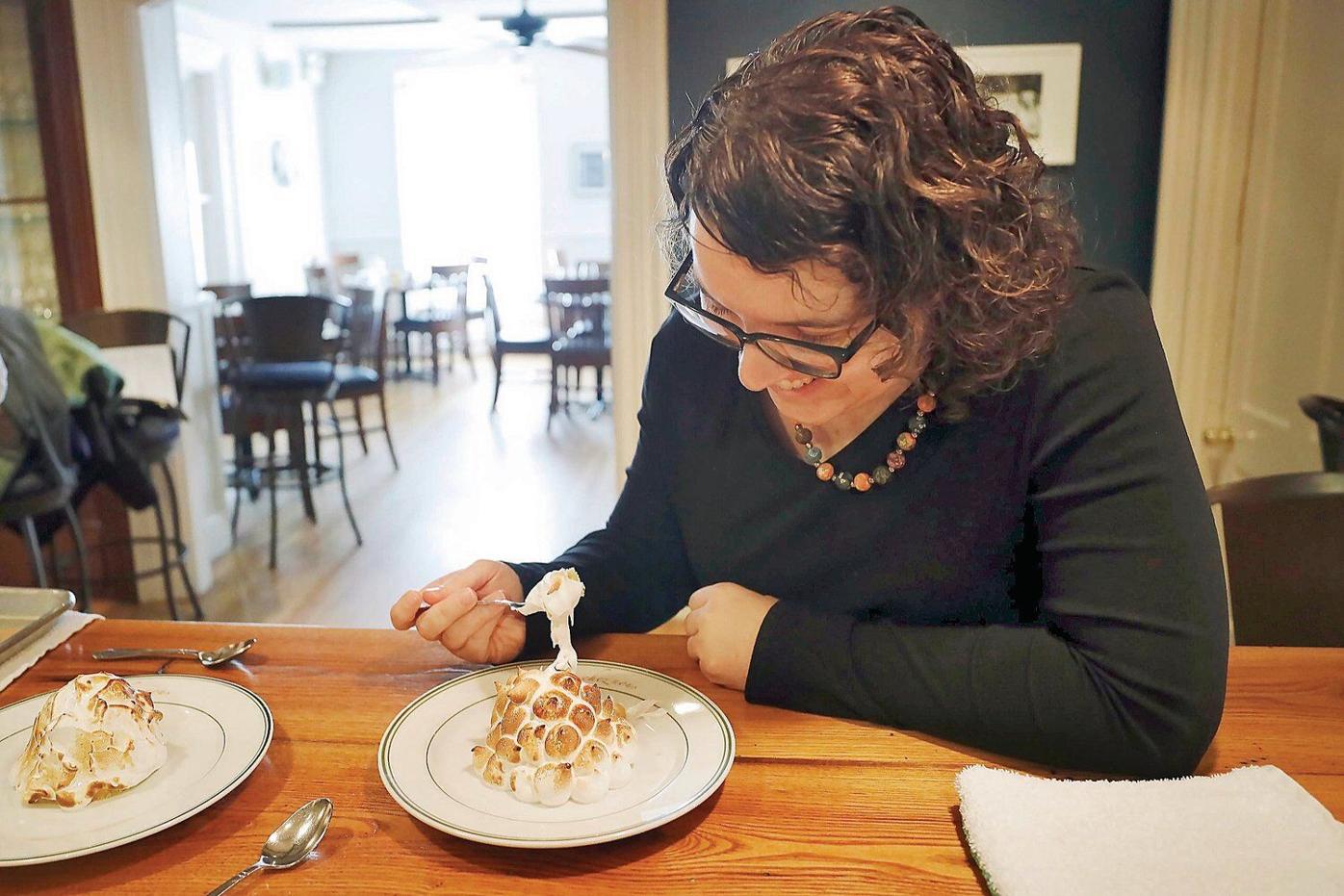 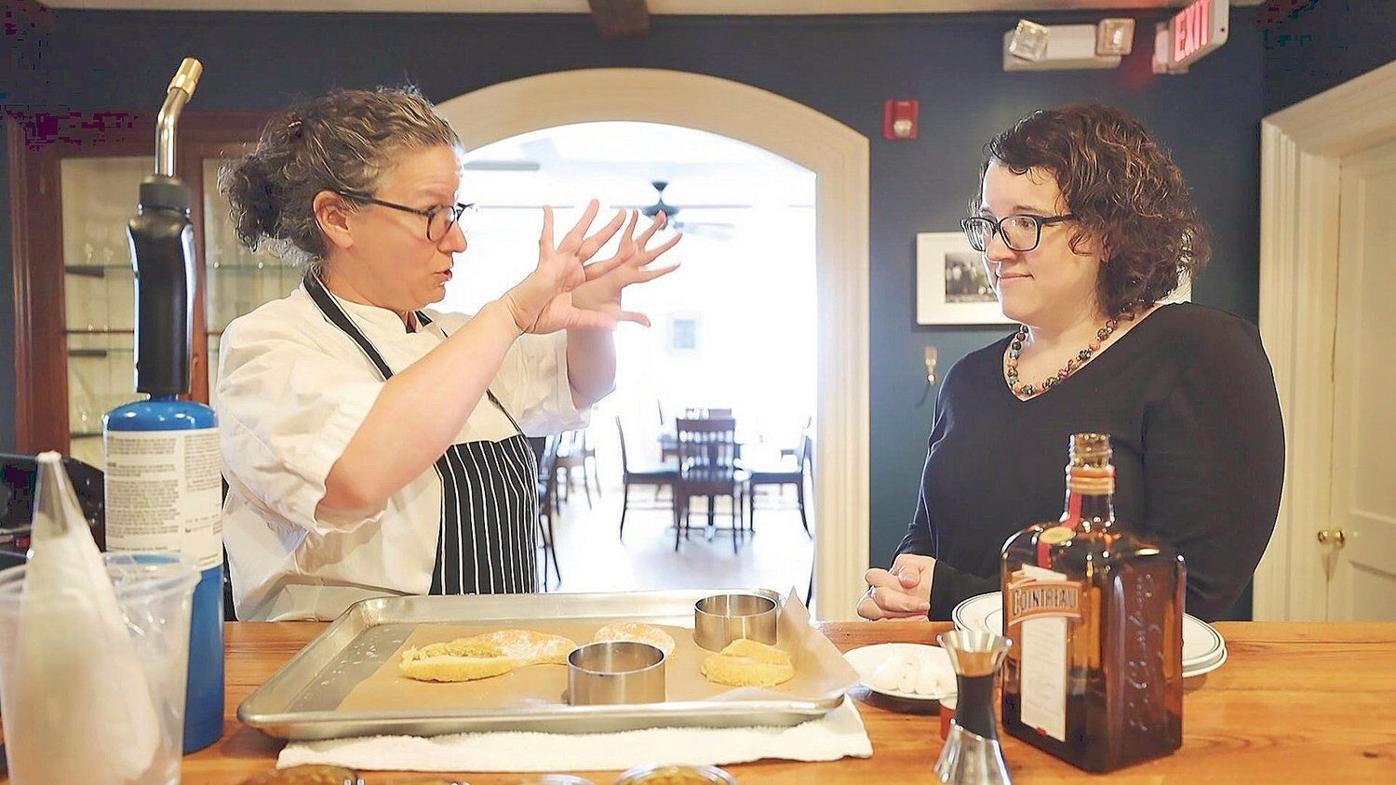 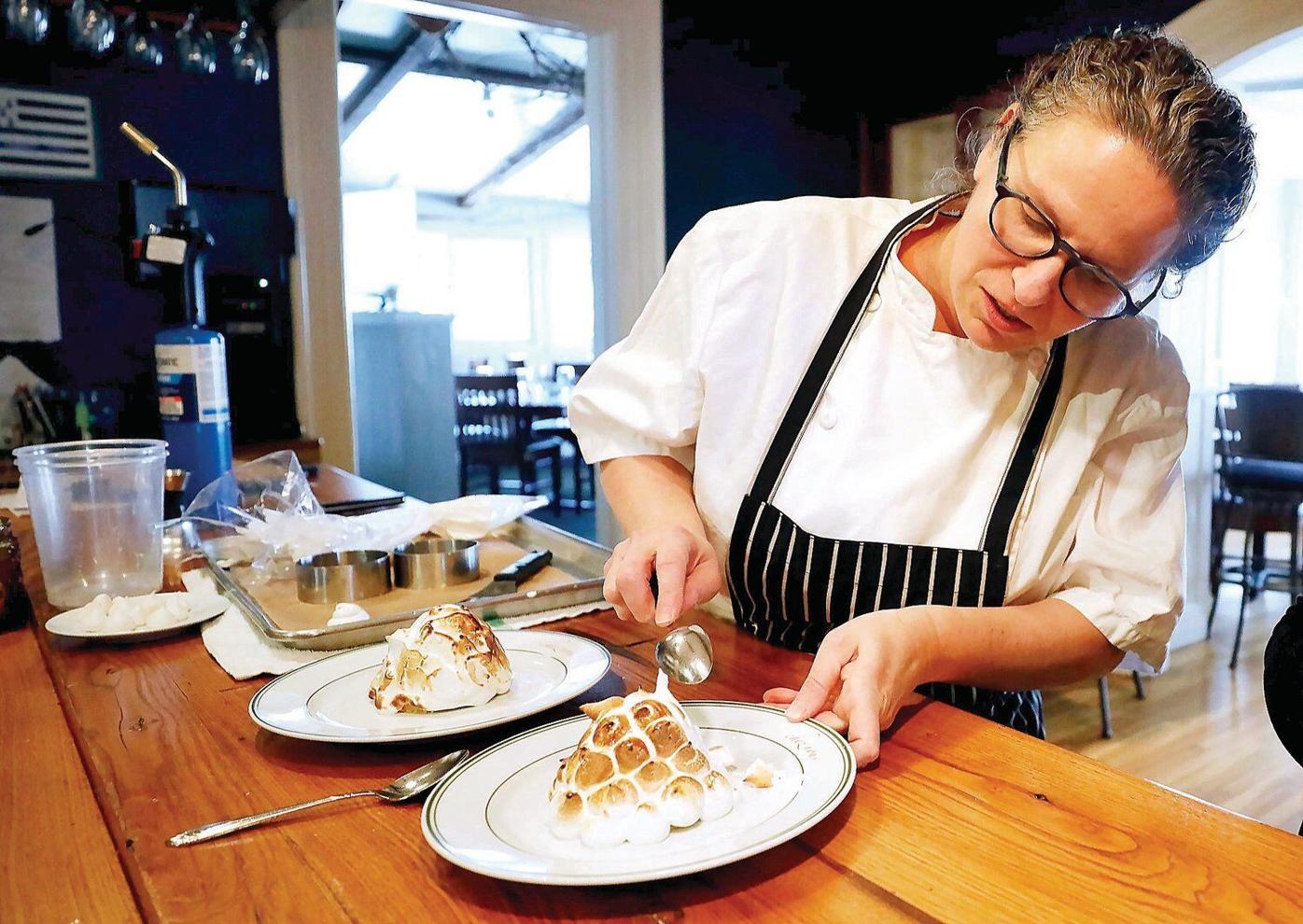 Portnoy said the most important part of making a Baked Alaska is making sure your ice cream is frozen solid.

Managing Editor of Features Lindsey Hollenbaugh starts the blowtorch to brulee the outside of her Baked Alaska. A fire hydrant was smartly kept close by.

Hollenbaugh uses the non-scientific method of hold-it-over-your-head to see if the meringue is stiff enough.

A Baked Alaska made by Rachel Portnoy at Chez Nous Bistro in Lee.

Portnoy said the most important part of making a Baked Alaska is making sure your ice cream is frozen solid.

When members of The Berkshire Eagle features department started asking around for a blowtorch, our significant others began to worry.

"WTH do you need a blowtorch for?" one worried husband asked after his spouse texted him the fiery query.

When deciding what my next food challenge should be — after my successful (if you don't mind me boasting) first-time attempt at making a towering croquembouche — I knew I wanted something a little less back-breaking, time-consuming and would possibly be perfect for a Valentine's Day menu.

What else says romance like a classic Baked Alaska? You've got cake, ice cream, Italian meringue and fire. Boom.

The dessert with a retro-vibe first originated at New York City's Delmonico's restaurant to commemorate the purchase of Alaska in 1867. It can be made with any kind of cake, ice cream combination you like and is often flambed for extra flare. Sounds easy, right?

Portnoy — who has been a pastry chef for over 26 years and runs the French restaurant with her husband, Franck Tessier — was kind enough to show me the basics.

"You need a cake base, and then you need the ice cream or sorbet of your choice," she explained as she constructed a mini Baked Alaska using two round cutouts of her favorite orange-vanilla cake with very frozen, perfectly-shaped scoops of vanilla ice cream and strawberry sorbet. I couldn't help but smile — this looked so easy compared to my last challenge of making what felt like a hundred perfect choux pastries, filled with cream, held together in a tower with nothing but caramel and the work of god's kitchen angels.

But then, Portnoy burst my frozen bubble when she got to the glossy, beautiful meringue.

"The thing about the Italian meringue is, it's a technique and it takes practice," she said. Great — technique, something I have loads of, as we all know.

"What I recommend is doing it at least once before your friends or Valentine's date comes over just to get the hang of it," she said.

She then went on to explain the meringue recipe that doesn't really require a recipe, but rather a keen sense for when those egg whites are whipped to the perfect moment of stiffness in time to add a pot of boiling sugar water while the beater is still going. Oh, and don't burn yourself.

I can't help but wonder why I keep putting myself in the position of boiling sugar in water to create a liquid pot of possible pain.

She topped her small Baked Alaska with her perfect Italian meringue and then gently bruleed it with a small kitchen blowtorch and then flambeed it with a shot of Cointreau. The taste was heavenly — creamy ice cream with a soft sponge cake topped with a slightly browned meringue that made me think of eating the perfect s'more around the campfire.

It all seemed so simple, until she put it all together in front of me. Now, I realized, I was basically tasked with setting ice cream on fire and hoping it doesn't melt.

But Portnoy was hopeful.

"When people are baking, I want them to have fun, and I want them not to cry," she said. "Any baking lesson I do I call 'Baking without tears.'"

Armed with my new knowledge and a borrowed blowtorch (definitely not kitchen-grade, by the way) I set out to make my own Baked Alaska in my kitchen.

Thankfully, one of my co-workers had remarked a few months ago how she had found a Baked Alaska tin set in her kitchen.

"Who ever needs a Baked Alaska tin?" she asked. Turns out, I did.

The classic-shaped dome tins allowed for two layers — one smaller tin that fit in the larger dome — so I picked vanilla and black cherry chunk ice cream to go with my chocolate cake. I started the process five days before I expected to construct and serve it, to make sure my ice cream layers were really frozen. If you don't have fancy tins, Portnoy said metal bowls are fine — just make sure you line the bowls with plastic wrap so the ice cream doesn't stick. I also froze my thin cake layer ahead of time so it could be easily cut to fit under the ice cream.

On the day of construction, I said a silent prayer to the boiling-sugar gods (there are a lot of gods in my kitchen, OK?) that the Italian meringue wouldn't be a sticky flop. I whipped the egg whites with some Cream of Tartar and a little bit of salt. When they reached what I had guessed was the right consistency, I gently poured in my boiling sugar water (that had reached 240 F) and kept beating. It felt like a long time, but eventually, I got my own glossy meringue. I even did the hold-it-over-your-head test like I'd seen done on "The Great British Baking Show" — if it didn't fall on my head, we were good to go.

Constructing the Baked Alaska was easy; the cake was the right size and the ice cream slid out of the mold perfectly. Then I went to pipe my meringue and it all went, well, messy. My meringue didn't set up as well as I thought it did, and it started sliding down my frozen dome. I quickly remembered Portnoy showing me that it didn't have to be fancy piping and that just covering the ice cream was key.

Finally, it was time for the blowtorch. After a quick tutorial (that was probably too quick by OSHA's standards), I hoped for toasted brown goodness and not melted ice cream. To my amazement, it worked.

(Note: If you don't have a friend who, strangely enough, just happens to have a blowtorch hanging around, Portnoy suggests quickly putting the Baked Alaska under the broiler, but after you re-freeze the ice cream with the meringue on it to give it a fighting chance of not melting.)

All I had left to do was flambe it with some booze — but wait, I didn't think this out and my liquor shelf is pretty much stocked only with tequila and vodka (I like a good margarita or martini, what can I say?) and the whole thing was starting to slide off the plate.

I grabbed a dusty bottle of Triple Sec, thinking it would do the trick and poured a shot over the dessert, and then accidentally poured another shot all over myself in my attempt to drink on the job. I went to grab the blowtorch, but thankfully realized maybe lighting it up while doused in alcohol was not my brightest idea. So the flambe fizzled out, and I smelled like orange liquor all day.

But, in the end, my giant Baked Alaska was delicious. The combination can't be beat — the ice cream, the cake and that Italian meringue, which has a perfectly sweet, almost marshmallow taste that completes the dessert.

"When you eat desserts like these," Portnoy said. "You see why they are classics."

Ice cream or sorbet of your choice

Ahead of time (at least one day, but can be done a week in advance) put ice cream into dome-shaped mold covered in plastic wrap, or, if doing individual Baked Alaskas, make perfect individual scoops of ice cream, and freeze. Make cake in thin pans and cut into shapes to match the size of your ice cream domes. Freeze.

The day of serving, make your meringue. Whip egg whites in a clean bowl on low-to-medium speed. While whipping, boil sugar, water and corn syrup until it reaches 240 degrees F. Once egg whites are whipped to a sight peak and sugar-water solution is to temperature, carefully and slowly pour the sugar solution into the egg whites while slowly whipping. Turn speed to medium and whip until eggs whites form stiff peaks.

Right before serving, take out your cake and ice cream from the freezer. Wait a minutes, while warming the outside of the bowl with your hands, then flip the ice cream onto the cake. Cover the ice cream quickly with your meringue, either with a piping bag or with a spatula. Using a blowtorch, brulee the meringue until it's lightly browned. You can flambe for extra table-side flare, but it's not necessary. Serve immediately — before the ice cream melts!

The new name, Café Triskele, inspired by the Celtic Triskelion (a symbol of rebirth, renewal and moving forward) may need some getting used to. But it seems appropriate as restaurants find the coronavirus pandemic has changed the way they do business.