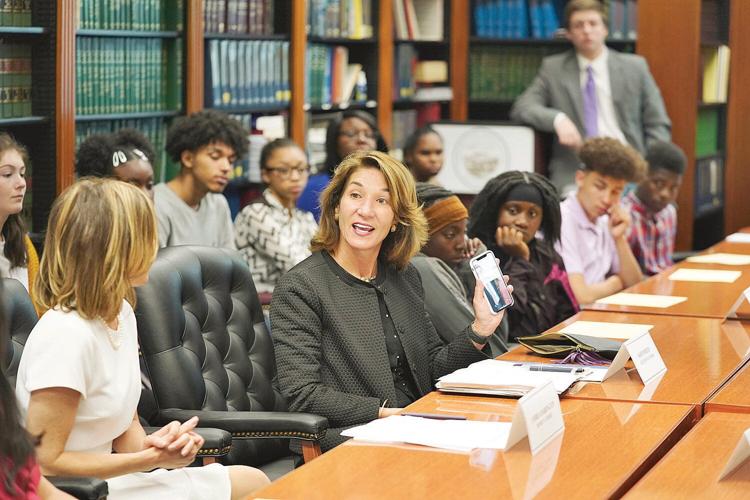 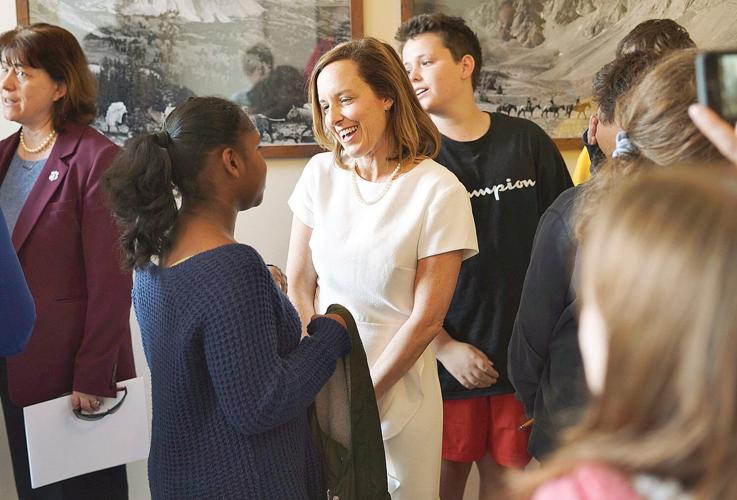 District Attorney Andrea Harrington speaks with a student after the launch event for "Respectfully."

District Attorney Andrea Harrington speaks with a student after the launch event for "Respectfully."

PITTSFIELD — In an effort to reach youths with messages about building positive relationships, state and local officials have decided to meet them where they live: social media.

The messages are part of a statewide campaign, "Respectfully," designed to help middle and high school students navigate through the complex world of relationships, be they friendships or romances.

Some 60 students and adults packed the Berkshire District Attorney's Office conference room on Thursday afternoon for the local launch of the campaign.

District Attorney Andrea Harrington welcomed the crowd, which included local and state officials, before turning the program over to Lt. Gov. Karyn Polito to discuss the campaign, share it and subsequently solicit feedback from this focus group.

The campaign, called "Respectfully," comes with the tagline, "Respect everyone fully. It starts with us." The campaign rolled out a series of three brightly hued, 20-second animated videos, officially published at the end of May, featuring teen and young adult characters successfully talking through the issues of control in a relationship, drama between friends, and name calling in school, respectively. In addition to being shared on the state's website at mass.gov/respectfully, the videos and posts are also being circulated through YouTube, Instagram and Snapchat. (Sorry, Facebook, you're no longer a prime hangout for today's teens.)

Polito leads and Harrington serves on the Governor's Council to Address Sexual Assault and Domestic Violence, which is working in partnership with the state Executive Office of Health and Human Services and legislators to implement programs and policies meant to combat and prevent domestic and sexual violence. Polito said the launch of Respectfully marks the first time in 20 years that the state has had a campaign focused on healthy relationships designed to reach 12- to 18-year-olds.

"For you, it's about prevention awareness and education," Polito told the students, noting that it's important for them to have the skills and "have an understanding and real appreciation for healthy friendships, and healthy relationships," as well as resources to use should these relationships become harmful.

She said that Bank of America and various state agencies will also start spreading the campaign's messages and using its logos and materials, and suggested that school committees across the state can adopt resolutions to be "Respectfully Communities."

The group also watched the three videos together. One called "Drama," which is featured with a transcript on the campaign website, goes like this:

Three young teen girls are hanging out in a bedroom. They all have their smartphones in hand and are listening to music. A dialogue begins.

Character 1: Hey, what's up with your group text about Kayla?

Character 2: Yea, I was wondering about that too.

Character 3: I just needed to vent about what happened the other day ...

Character 1: if you're upset, just talk to her!

Character 2: You'll both feel better if you talk it out.

Character 3: I guess you're right. Let me see if she's around.

The scene ends with the Respectfully tagline and website.

Polito then polled the students about whether they liked the videos and would be willing to share them, through social media and posters, beginning this summer and through a concerted effort in the fall, at the start of the new school year.

Rising Pittsfield High School senior Kymani Harley said he had seen the video before on social media but couldn't remember if he was compelled to share it. Overall, he said, the videos "send a good message to learn how to respect everyone."

But he and the other students in the room all seemed to agree that whether it's building healthy relationships or sharing this message, communicating in person is always better.

Several students suggested that the videos be shown in schools and camps and movie theaters — wherever young people are — but also that they include opportunities for teens to further discuss the messages with their peers and adults. There are programs throughout the county that currently exist to address the same themes as the videos, including Richmond CARES at Richmond Consolidated School, Students Who Have a Voice at Pittsfield High School, and in-school programs offered by the education team of the Elizabeth Freeman Center among others.

Several students suggested that the campaign involve reaching out to younger students.

Berkshire County Sheriff Thomas Bowler said, "I see a great opportunity in this campaign for kids to teach the grownups," noting that parents and other adults are just as culpable for perpetuating bad habits in relationships and communication.

Polito and Harrington and other dignitaries concluded the meeting by praising the students for their thoughtful feedback and suggestions.

Cathy Felix attended the event with her 14-year-old granddaughter, Carly Pontier, whom she adopted after her daughter, Julie Shade, 22, died in 2008 after being strangled by her estranged husband. The family team has committed themselves to raising awareness about domestic violence in Shade's memory.

"I'm hoping it will make some difference, but more needs to be done on healthy relationships," she said of the campaign. "It needs to be all-encompassing, and you cannot wait until high school, and should not wait till middle school."