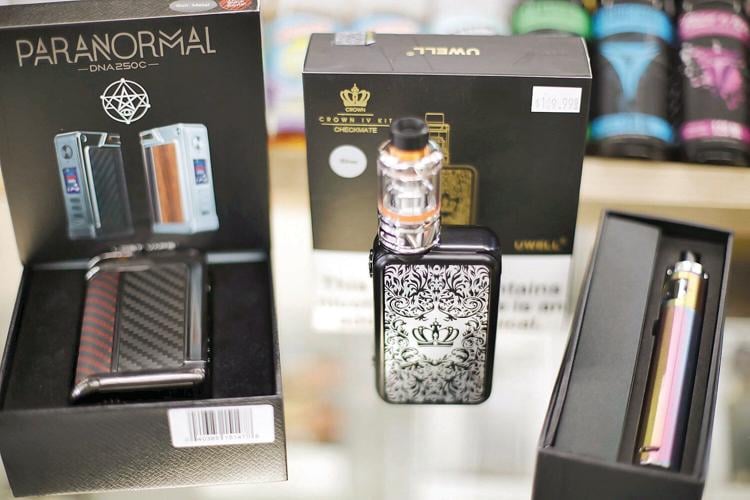 Different kinds of vaporizers are for sale at Uniq Vape in Lanesborough. While the use of other substances, like cocaine, alcohol and chewing tobacco, has decreased among surveyed eighth, 10th and 12th graders in Berkshire County, e-cigarette use is on the rise. 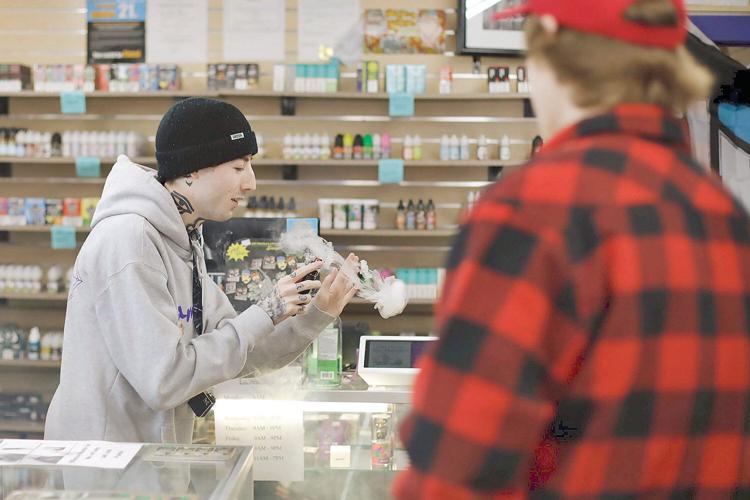 Austin Wise of Uniq Vape in Lanesborough shows Matthew Larson tricks that can be performed with different kinds of vaporizers. In 2017, 16.6% of surveyed Berkshire County students had used e-cigarettes in the previous 30 days. This year, that number is up to 24.8%. 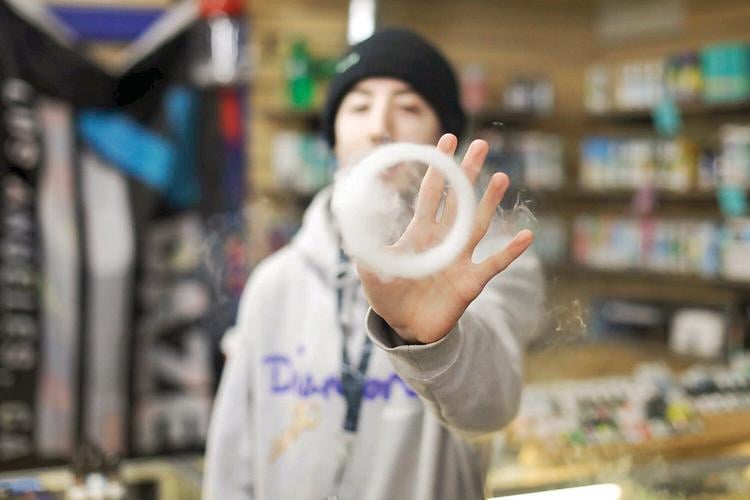 Austin Wise of Uniq Vape in Lanesborough demonstrates an effect that vaporizer users can perform. E-cigarettes are prohibited in Berkshire County schools, but in addition to punishing those who carry the devices, officials are working toward prevention programming as well.

Different kinds of vaporizers are for sale at Uniq Vape in Lanesborough. While the use of other substances, like cocaine, alcohol and chewing tobacco, has decreased among surveyed eighth, 10th and 12th graders in Berkshire County, e-cigarette use is on the rise.

Austin Wise of Uniq Vape in Lanesborough shows Matthew Larson tricks that can be performed with different kinds of vaporizers. In 2017, 16.6% of surveyed Berkshire County students had used e-cigarettes in the previous 30 days. This year, that number is up to 24.8%.

Austin Wise of Uniq Vape in Lanesborough demonstrates an effect that vaporizer users can perform. E-cigarettes are prohibited in Berkshire County schools, but in addition to punishing those who carry the devices, officials are working toward prevention programming as well.

On any given day at high schools across the county, students can be found congregating in bathrooms with their e-cigarettes.

Even in classes, some will sneak a hit with their head bowed under their desks.

And if they don't get their fix, the teenagers will start to shake and have trouble focusing.

"It's a nationwide health crisis that we're on the front lines of, having to deal with the way that minors are being targeted by these companies," said Drury High School Principal Timothy R. Callahan.

In 2017, 16.6% of surveyed Berkshire County students had used e-cigarettes in the previous 30 days. This year, that number is up to 24.8%. Across the county, educators are grappling with how to reprimand students who vape in schools while also getting them help for the nicotine addictions that are interfering with their learning.

Every two years, the Berkshire Youth Development Project conducts a Bach Harrison Youth Survey — it's sponsored by Berkshire United Way and other groups — on Berkshire County students to assess substance abuse and health risks among the county's youths.

E-cigarettes were added to the survey in 2017, about a year before Berkshire County high school officials began noticing that some students were becoming addicted to the nicotine products, some of them sneaking hits in bathrooms or classrooms. While the use of other substances, like cocaine, alcohol and chewing tobacco, has decreased among surveyed eighth, 10th and 12th graders, e-cigarette use is on the rise.

"I would say last year, maybe midyear, we started seeing vaping devices in school," according to Pittsfield High School Principal Henry Duval. "Things were really escalating with the intro of the Juul; that would have been in the spring of 2018. That's when things really took off. The kids are using them mainly in the restrooms, and some in stairways."

E-cigarettes, like Juuls, are techy devices as small as a USB drive. While they are marketed as less harmful than smoking because their cartridges have fewer chemicals than cigarettes, and are heralded by some adults who are trying to quit other tobacco products, agencies across the country, including the office of Massachusetts Attorney General Maura Healey, are investigating e-cigarette companies, like Juul, for their alleged targeting of minors. Some state legislators have proposed higher taxes on the products.

Joyce Brewer, the tobacco-free community partnership manager for Berkshire County, said that, unlike smoking, vaping is so new that studies on health issues related to the chemical makeup of the cartridges are not sufficient. What is clear, she said, is the addictive qualities of the high-nicotine products.

"I'm telling parents that if they suspect their youth are vaping, always start with their pediatrician," Brewer said. "When they don't vape, they get queasy, they get shaky."

In the fall, the Food and Drug Administration banned sweet, kid-friendly flavors of the nicotine cartridges, but critics, including some school officials, said that the move came too late.

At Pittsfield High School, teachers continue to find Juul pods around the school, but the real peak of the issue was last spring, when companies were selling flavors like "cotton candy and gummy bears," Duval said.

The students, he said, find a solidarity in vaping. While the use of the devices might be widespread, those who are addicted, and are regularly doing it in school, tend to be students who are marginalized and not involved in school activities, Duval said.

"What we're finding quite often is a group of young male students, primarily, bonding over a culture," he said. "They're finding their way to the bathrooms constantly as a group. For some kids, I think they are joining in to belong."

But, in Callahan's experience, it was a smaller group that smoked outside school in decades past.

"They treat it like candy. They do not even consider it in the same realm of smoking," Callahan said. "We're going to have an entire generation of kids addicted to nicotine."

Douglas Wine, principal of Monument Mountain High School, said that today, traditional cigarettes tend to be used by the poorest of students, but that's not the case with vaping.

"I know that the concern for Juuling is that it cuts across all typical barriers," he said. "You can't define it by socioeconomics; it's just too easy to use."

E-cigarettes are prohibited in schools, but in addition to punishing those who carry the devices, officials are working toward prevention programming as well.

"Right now, what we're doing is punitive; they're being suspended," Duval said of Pittsfield High School students being caught with the devices. "We're certainly doing some education, but it's after the fact."

The craze "caught us off guard and steamrolled," Duval said.

"A student who is caught then goes through informal sessions about addiction," he said. "What we are starting to try is being proactive in educating the student population on the dangers."

At Drury, students can have their suspensions reduced by agreeing to speak to a substance abuse educator from the Brien Center.

"When we see it in school, it's the same as a narcotic," Callahan said. "Our goal is not to suspend; our goal is to educate."

Like the Brien Center, the Railroad Street Youth Project in Great Barrington provides programming to Monument students who have been caught with the devices.

This academic year, the youth center started offering a mindfulness program for young people that is based on inquisitiveness, according to Chris Tucci, deputy director of the Railroad Street Youth Project.

At Mount Greylock Regional High School, the Peer Resource Team, a group of juniors and seniors who take a yearlong course to advise their peers in navigating health-related issues, is doing the educating and prevention programming for the younger students.

One peer team group is focused on talking to middle schoolers about vaping.

Members of the group, who asked not to be identified by name, said that they have found that the middle schoolers tend to get started with e-cigarettes by seeing their older siblings or peers using them.

As a group, they avoided making sweeping statements about the prevalence of the devices and what ages are more prone to use them, but one 17-year-old peer team member who said he previously had gotten in trouble for using a device in school believes that students prone to anxiety are more likely to get addicted to vaping.

The group hopes that by working with middle schoolers about the issues related to vaping and addiction, it will deter some of them before they make it to high school.

Wendy Penner, director of prevention and wellness at the Northern Berkshire Community Coalition, noted how vaping is bucking the otherwise downward trend in substance use among Berkshire County students.

"The use of alcohol is down, and other substances, but vaping is just exploding," she said. "I think this has a very deliberate marketing toward kids.

"Looking at tobacco data, it's unbelievable the success we've seen," Penner added. "Vaping might be less harmful than smoking cigarettes, but it's backtracking.

"That's why vaping can be a good smoking-cessation device, but there is nothing helpful about kids getting addicted to tobacco," she said of its chemical makeup.

This year, fewer than 6% of surveyed Berkshire County seniors had smoked a cigarette in the previous 30 days, but 31.7% of the same students had vaped, according to the youth assessment survey.

Vaping is less expensive than smoking cigarettes. A starter pack with an e-cigarette and four cartridges, each containing about 200 puffs, can be purchased for $30, Penner said.

"This year, more kids vape than drink alcohol," she said.

Penner has been hosting outreach meetings about vaping for over a year.

At first, few people were attending public meetings on the devices, and parents, for the most part, weren't knowledgeable about the issue, according to Callahan.

While public awareness of vaping is on the rise, and with politicians speaking out about the crisis — some are calling it an epidemic — there hasn't been any funding coming in to subsidize schools for prevention and education, according to Callahan.

"If you have one to four kids a week [being caught with devices], we're talking about tens of thousands of dollars a year just for our school in terms of man-hours," Callahan said. "We're not being reimbursed for that."

Grants are just now becoming available, and Drury has applied for some funding but has yet to hear back.

"It's beginning to happen," he said. "It's lagging so far behind."

Pittsfield last updated its tobacco policies in 2019. Here's what the Board of Health wants to change

The draft policy, unanimously approved by the board during its meeting Wednesday, would be the first update to the city's tobacco sales rules in three years.