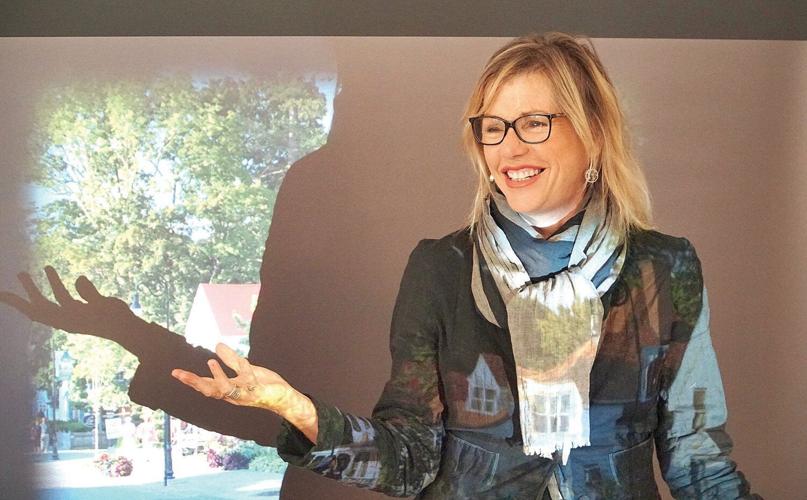 Anita Walker, executive director of the Massachusetts Cultural Council, speaks Monday at the council's official designation of Lenox as a Cultural District. 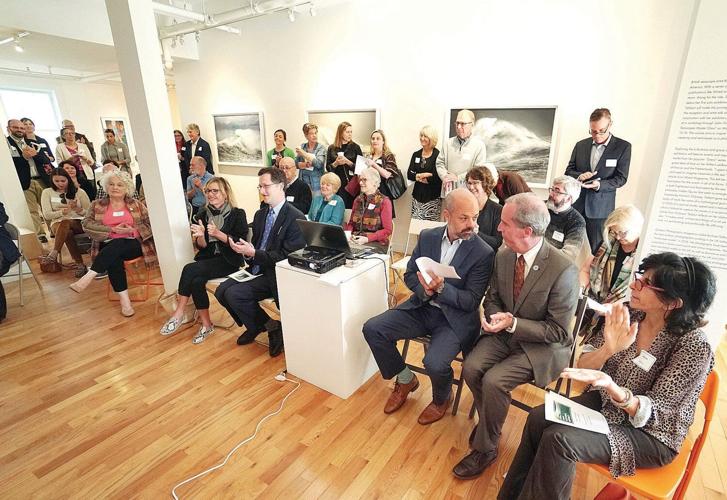 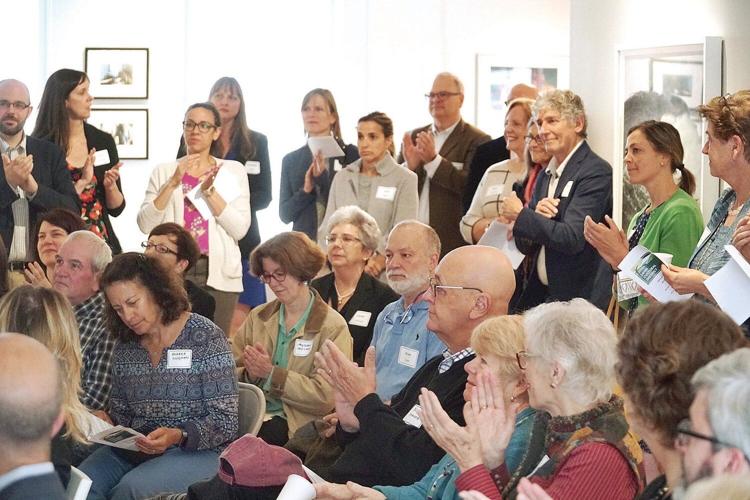 A large crowd gathered Monday at the Sohn Fine Art gallery in Lenox for the official designation of the town as a state Cultural District. 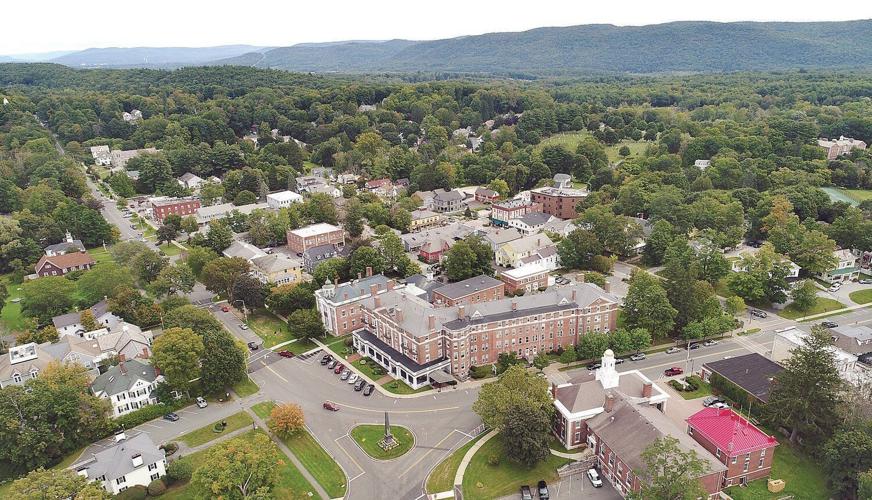 Lenox, as seen in this aerial photo, has been designed as the state's 48th Cultural District by the the Massachusetts Cultural Council. The district includes the area around Main, Church, Franklin and Walker streets, extending to the Community Center, Trinity Episcopal Church and the Gateways Inn.

Anita Walker, executive director of the Massachusetts Cultural Council, speaks Monday at the council's official designation of Lenox as a Cultural District.

A large crowd gathered Monday at the Sohn Fine Art gallery in Lenox for the official designation of the town as a state Cultural District.

Lenox, as seen in this aerial photo, has been designed as the state's 48th Cultural District by the the Massachusetts Cultural Council. The district includes the area around Main, Church, Franklin and Walker streets, extending to the Community Center, Trinity Episcopal Church and the Gateways Inn.

When he was a boy, he recalls, the downtown consisted of a car dealership, two gas stations, several grocery stores, a department store and residences along Church Street.

"We saw this town slowly and deliberately transform itself into what it is today — predominantly businesses, art galleries and restaurants, something we never would have believed 50 years ago," said Pignatelli, who recently turned 60.

The Lenox Democrat made his comments Monday during an event to celebrate the town's designation as a Cultural District, one of five in the Berkshires under the Massachusetts Cultural Council program.

More than 100 local arts leaders, state lawmakers, business owners and town officials made for a robust turnout for the event at the Sohn Fine Art gallery on Church Street — a building that Pignatelli noted once housed a plumbing and heating shop with indoor miniature golf attraction on the second floor.

The council voted unanimously to approve the application from Lenox at its quarterly meeting held in May at Jacob's Pillow in Becket.

Anita Walker, executive director of the Cultural Council, announced the current state budget bolsters funding for the council by $2 million, thanks to support by Pignatelli and state Sen. Adam Hinds, D-Pittsfield, who also attended the event. Much of that increase will be distributed to arts groups locally and throughout Massachusetts.

The total state Cultural Council budget has reached $20 million for 2020, $18 million from state lawmakers and the rest from the National Endowment for the Arts and other sources. That means Berkshire applicants for Cultural Council funding may well qualify for an increase in their allotments.

Walker, as leader of the council since April 2007, is the state's highest-ranking cultural official. She told the crowd that the turnout was the largest she has seen for a Cultural District unveiling.

She described the award as "celebrating what you already have here in Lenox, bringing the people together who make this community work every day. When we harness the collective energy and genius of all of you, that's what the Cultural District program is all about — to capitalize on what is real, authentic and special about your place."

She also cited "an intangible something about this place that artists have known for more than 100 years, from Nathaniel Hawthorne to Edith Wharton to the amazing music that is in our area."

After state lawmakers approved the idea of specific cultural districts in 2011, the council began formally designating cities and towns with vibrant arts, humanities and science institutions. Lenox is the 45th district designated in the state, and the fifth in the Berkshires, joining Great Barrington, North Adams, Pittsfield's Upstreet District and Williamstown.

After the town's Select Board approved a resolution last fall supporting the application for the award, officials and leaders of the cultural community worked with Senior Planner Laura Brennan of the Berkshire Regional Planning Commission in a yearlong effort to secure the designation.

The contours of the the Lenox district closely mirror the town's historic village area on Main, Church, Franklin and Walker streets, extending to the Community Center, Trinity Episcopal Church and the Gateways Inn.

To qualify, a community's cultural district is pedestrian-friendly and compact, although the benefits of the designation extend beyond the mapped borders into surrounding areas.

Cassandra Sohn, owner of the gallery that hosted the event, pointed out that Lenox has the highest concentration of galleries in the Berkshires, offering events such as artist talks, workshops, open studio tours and participation in the statewide annual Art Walk held in late May.

"Art Lenox (a local gallery association) has a distinct vision for expanding our programming," Sohn said, with support from the state Cultural Council and the town. "Our mission is to further enrich the town as a cultural destination for the visual arts."

"A program like this shines a big, bright light on it and that's terrific for the town," he said.

The town budget, supported by voters, matches the council's funding annually, he added.

"There are lots of things we can be doing and this is a clear spearhead," Hinds said, listing among several priorities the start of "Berkshire Flyer" weekend train service from New York City to Pittsfield next June.

Nancy Goldberg, longtime owner of the Belvoir Terrace summer camp for the arts founded by her mother in 1954, emphasized the role of the camping industry in bringing significant business to the area, including new homeowners and supporters of local culture, as well as exposing children to the arts.

"We're seeing a dramatic shift with younger people coming to the Berkshires," he said, adding that the Boston Symphony Orchestra's new, year-round, climate-controlled Linde Center for Arts and Learning at Tanglewood is helping expand tourism into the off-season.

And he noted major investments at Canyon Ranch, Cranwell (soon to be a Hyatt Hotels Miraval resort) and Elm Court, among others.

"People in the creative economy are doubling down on Lenox," he said.