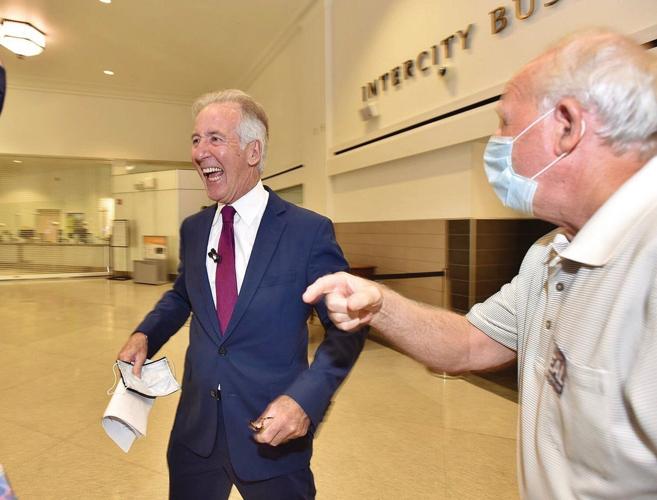 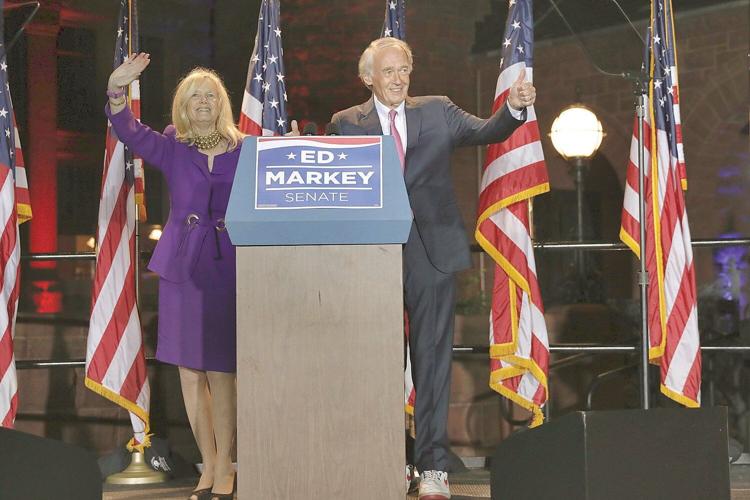 Incumbent U.S. Sen. Edward Markey and his wife, Susan, celebrate Tuesday in Malden, after the incumbent defeated U.S. Rep. Joseph Kennedy III in the Massachusetts Democratic Senate primary. Markey will face off in November against Kevin O'Connor, of Dover, who beat Shiva Ayyadurai, of Belmont, in the Republican primary contest. 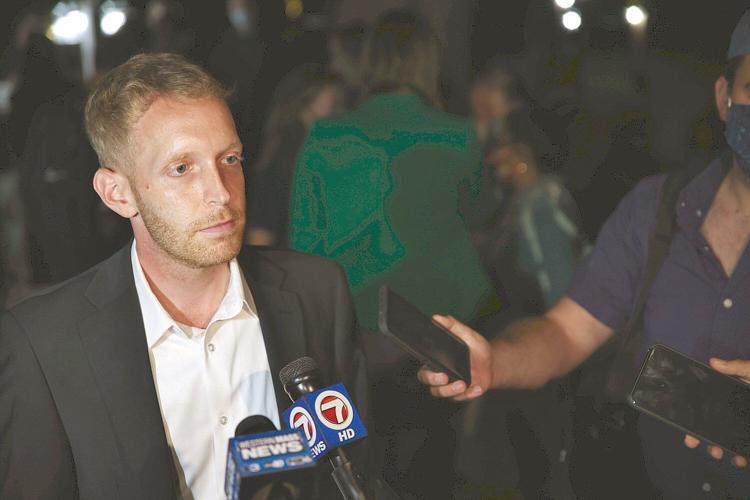 Holyoke Mayor Alex Morse speaks to reporters Tuesday, after his defeat by incumbent Richard E. Neal in the race for Massachusetts' 1st Congressional District. When asked whether he might run again, Morse, 31, said everything is "on the table."

Incumbent U.S. Sen. Edward Markey and his wife, Susan, celebrate Tuesday in Malden, after the incumbent defeated U.S. Rep. Joseph Kennedy III in the Massachusetts Democratic Senate primary. Markey will face off in November against Kevin O'Connor, of Dover, who beat Shiva Ayyadurai, of Belmont, in the Republican primary contest.

Holyoke Mayor Alex Morse speaks to reporters Tuesday, after his defeat by incumbent Richard E. Neal in the race for Massachusetts' 1st Congressional District. When asked whether he might run again, Morse, 31, said everything is "on the table."

HOLYOKE — It was not the night for challengers.

Holyoke Mayor Alex Morse failed Tuesday in his effort to oust a man, U.S. Rep. Richard E. Neal, who has been in Congress longer than Morse has been alive.

And Sen. Edward Markey held off a primary contest against U.S. Rep. Joseph Kennedy III. Though Kennedy was ahead in early polling, Markey surged late in the campaign and was leading 54.6-45.4 with 44 percent of the vote in Tuesday — and had been declared the winner.

Neal gave a victory speech from Union Station in Springfield, highlighting the ability of legislation to improve lives. He said he has "delivered" for Springfield and the 1st District, and that he would continue to do so.

The spot for the speech held significance to Neal. It was where he first announced his candidacy for Springfield City Council in 1977, with a pledge to restore Union Station.

"Union Station is an example of a truth: Government can change lives," he told a small group of reporters and about 30 supporters who had been invited to the station.

Morse told supporters that his challenge of Neal wasn't personal, then went on to say the incumbent won with the help of corporate interests.

"We ran against one of the most powerful incumbents in Washington, who had access to millions," Morse said. "I do not have a single regret when I think about everything we fought for. The fight continues, because we need to decide what kind of community and country we need to be."

When asked whether he might run again, Morse, 31, said everything is "on the table."

In fending off Kennedy, Markey harnessed support from progressive leaders to overcome a challenge from a younger rival who is a member of America's most famous political family.

Markey appealed to voters by positioning himself as aligned with the liberal wing of the party. He teamed up with a leading progressive, New York U.S. Rep. Alexandria Ocasio-Cortez, on the Green New Deal — and at one point labeled Kennedy "a progressive in name only."

The Associated Press reported that the strategy helped Markey overcome the enduring power of the Kennedy name in Massachusetts. The 39-year-old congressman sought to cast the 74-year-old Markey as someone out of touch after spending decades in Congress, first in the House before moving to the Senate.

Neal credited the New Deal policies of President Franklin Delano Roosevelt with helping his own family, noting his working-class roots.

"That climb inspired me to make sure that opportunity is open to everyone who reaches forward, to make America a place where no one will be forgotten and no one is left behind. ... I believe, as I have said repeatedly during this campaign, that it is legislation that changes our lives," Neal said.

Morse was greeted warmly by longtime backers in his home city and recounted his reasons for seeking public office.

"I will get up tomorrow with the same passion and persistence that I got up with this morning," he said. "We're certainly not done yet, and this campaign story is not done yet. I believe in our future now more than ever."

Morse said his campaign suffered from allegations of improper conduct while as an adjunct professor at the University of Massachusetts-Amherst that he claimed to have been orchestrated by the Democratic Party's apparatus in Massachusetts. "We saw a coordinated political attack. We have to send a message loud and clear that these kinds of tactics are inappropriate."

He said the message from entrenched politicians was this: "You don't speak up against power and you wait your turn."

Logan Malik, the Morse campaign's organizing director, said a focus on winning support in Pittsfield showed promise but did not deliver the numbers needed.

"There were some breakthroughs here and some openings; that change is something that is possible in the Berkshires," said Malik, who grew up in Great Barrington. "There was great interest in seeing more progressive candidates represent our area."

Patrick T. Kavey, a Ward 5 Pittsfield city councilor, was one of eight of 11 members of his panel to back Morse.

"It brought a lot of good energy and hope to people who feel they've been under-represented," he said of the Morse campaign.

The winner in Tuesday's 1st District primary will be unopposed in the November general election. Markey will face off in November against Republican Kevin O'Connor, of Dover, who beat Shiva Ayyadurai, of Belmont, in the Republican primary contest.

State Rep. Carlos Gonzalez, D-Springfield, said he salutes Morse for running but believes Neal's accomplishments and power made him the right choice.

"Congressman Neal has done an outstanding job," Gonzalez said. "Our role is to make sure that we have a congressman that can bring resources to our local cities and towns, and having the chairman of Ways and Means in that capacity, it would be, in my opinion, foolish to change that at this time."

Heriberto Flores, executive director of the New England Farm Workers' Council, praised Neal's reliability and leadership, which Flores said was important at a time when President Donald Trump is creating divisions in the country.

Regarding Morse's campaign and supporters, Flores said, "That was me at one point. We wanted to change the world."

But, Flores said of Neal, "This guy is the real deal," noting that he has supported Neal for over 40 years.