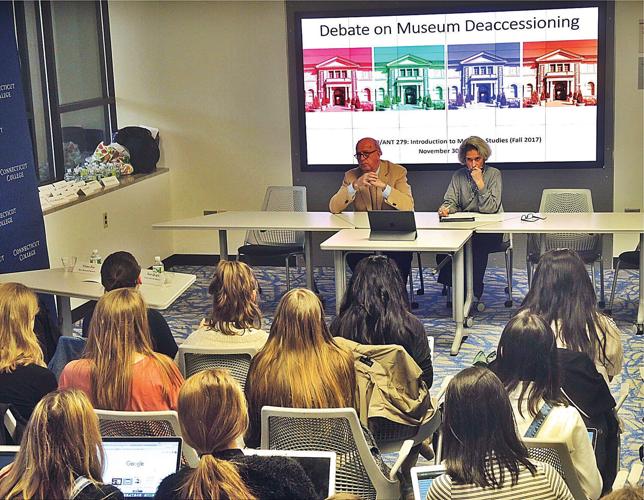 Judges Sam Quigley, left, and Vivian F. Zoe, both of whom lead Connecticut museums, prepare to present their determination after a debate at Connecticut College in New London, Conn., about the Berkshire Museum art deaccession. 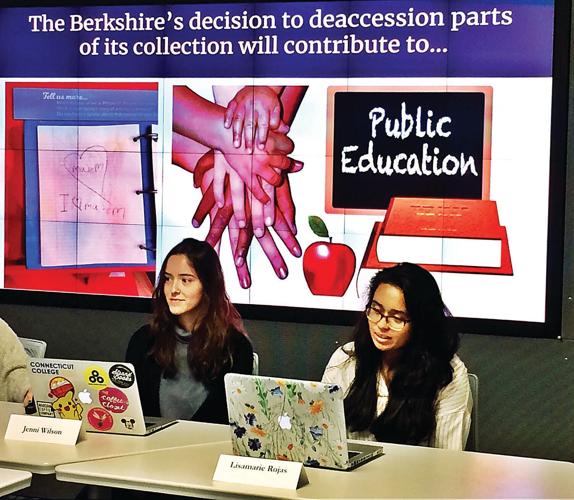 Connecticut College students Jenni Wilson, left, and Lisamarie Rojas present an argument in favor of the Berkshire Museum art deaccession in a debate at the New London, Conn., school. 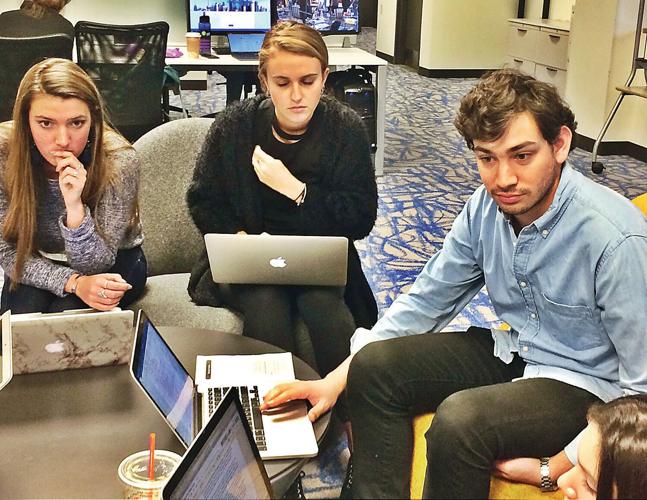 Connecticut College students Meghan Hanley, Nina Nalle and Ben Ynocencio, from left, plan strategy before a debate about the Berkshire Museum art deaccession at the school in New London, Conn.

Judges Sam Quigley, left, and Vivian F. Zoe, both of whom lead Connecticut museums, prepare to present their determination after a debate at Connecticut College in New London, Conn., about the Berkshire Museum art deaccession.

Connecticut College students Jenni Wilson, left, and Lisamarie Rojas present an argument in favor of the Berkshire Museum art deaccession in a debate at the New London, Conn., school.

Connecticut College students Meghan Hanley, Nina Nalle and Ben Ynocencio, from left, plan strategy before a debate about the Berkshire Museum art deaccession at the school in New London, Conn.

NEW LONDON, Conn. — When their professor pulled out the playing cards, it was time for members of the Introduction to Museum Studies class at Connecticut College to take sides.

Ege Sakirt, a junior, looked at professor Christopher B. Steiner and drew out a black card.

That color put him and a dozen classmates on the side of the Berkshire Museum — and on a collision course with those who found themselves holding red cards: foes of the Pittsfield institution's plan to sell 40 deaccessioned works of art.

While the museum is poised to pull $60 million or more in value from its collection, the payoff for students of museum practice — here and around the country — is the issue itself.

"This was a goldmine for museum studies — and it's happening right now," said Sakirt, who lives in Amherst, Mass.

After weeks of study that included field trips to both the Norman Rockwell Museum in Stockbridge at the Berkshire Museum, the two debate teams fought it out Thursday, verbally, before an audience in the school's Shain Library, one floor below a collection of Asian art.

In two decades of teaching, Steiner says he's never had an issue such as deaccession — the method by which museums remove objects from a collection — loom so profoundly over his syllabus.

"This is very much a story that is unfolding and ongoing," Steiner told the debate teams, after their members had fueled up on pizza and cupcakes and gone over their arguments one last time. "It just worked out for this class amazingly."

And not his alone.

At the Harvard Extension School in Boston, where students can pursue certificates in museum studies, Jennifer Lawrence spent this past weekend researching a paper on the Berkshire Museum's plan to sell works at auction. That venture is now paused for at least another week by court order, amid an investigation by the Attorney General's Office.

"To be honest, I could go either way," Lawrence told The Eagle.

But she planned to support the museum's move to bring works to auction, including the jewel of its collection, Norman Rockwell's painting "Shuffleton's Barbershop."

"It's an important issue, I can tell you that, and it's created a lot of debate on both sides," Jones said.

Let's not beat around the barbershop.

The museum side won the Connecticut College debate.

Sakirt and his classmates used their 10-minute opening to great effect, two judges decided. Based on their research into the case, including documents provided by Elizabeth McGraw, the museum board's president, they argued that the facility risks closing, that its financial condition is dire and that it must find a way to survive to serve its public, particularly low-income children in Pittsfield.

Selling art, the team said, is the only way to ensure the museum's long-term existence. And serving its audiences, they said, demands change, including a shift in focus to science and nature.

"The reality is the Berkshire Museum is on its last legs," said student Emma Walsh. As she spoke, a slide called up onto the room's "visualization wall" showed a column of red ink.

"The community needs the Berkshire Museum to stay open," said fellow team member Elyse King-Guffey. "We must deaccession these 40 pieces."

By drawing black cards, members of the pro-deaccession team knew they faced a heavy lift, in a class devoted to absorbing accepted rules of museum practice.

As a printed program Steiner prepared for the debate made clear, museum organizations decry instances in which deaccession proceeds are used for operations or renovations.

As perceived underdogs, the pro-deaccession side dug in.

One member, Kezia Rogers, said later that the difficulty in finding arguments "made our arguments stronger."

Another member, Ali Harris, said later she felt citing the needs of poor children helped give her side an edge. The appeal of that argument, she hoped, would counterbalance the ethical constraint about using deaccession proceeds for operations.

"The education of children is more important than specific works of art," teammate Kenta Bloom had said in the debate.

Another factor may have come into play in the debate format, in which participants needed only to persuade two judges.

Of the two sides represented, the museum has a specific plan, noted student Jake Pescatore, a member of the winning team. He and his classmates were able to prosecute the merits of taking specific steps (the sale) to overcome a specific problem (financial gaps).

The judges felt initial arguments for deaccession were more forceful, and they weren't alone.

"The 'pro' team did a much better opening — and that led the tone for it," said Steiner, the professor.

Not best in long term

Students charged that the museum is overstating its deficit, has done too little conventional fundraising and risks being ostracized in the museum world and discouraging future gifts of art.

"The museum values the money over the value of the art pieces," said student Sarah Stephen. "It appears the museum is not actually in a financial crisis."

Stephen's squad opened for the sale opponents, staking out the position.

"It is neither ethical nor practical for the long-term vision of the museum," said team member Maddy Bank.

"The public trust is being betrayed," added Loulou Broderick.

Others pointed out that while the museum surveyed public opinion through focus groups, it did not disclose at the time that art sales would fund the change.

And they faulted the museum for disregarding what team members believed would have been Rockwell's wish to keep his work on view in the Berkshires.

The debate format gave the teams a few minutes to regroup between segments. They came back with rebuttals, then, after a five-minute breather, with summaries.

The pro-deaccession team plucked a new argument from that week's news. Changes in the U.S. tax system, one student said in the summary, could make it even harder for nonprofits if fewer taxpayers itemize charitable deductions.

In their closing, the team called up a slide showing a social media review of the museum.

"Shabby and sad" it said of the place — a view the museum would likely want to debate on its own.

The anti-deaccession team, perhaps feeling the sting of the outreach to children, argued that the museum is not a school.

But its "no" case remained somewhat fuzzy.

"We just believe there is a better way to save the museum and save the paintings," said student Jenny Carroll.

"They should not scrap what they have," said teammate Ben Ynocencio.

Serenity Chen added, "The museum is only focusing on the present — and not the future."

Both had set aside personal views on the issue.

"My heart is truly in retaining the works and protecting them for the community," Zoe told the students, after Quigley announced the winning side.

Even if he didn't have the Berkshire Museum to discuss, Steiner's class plan always covers deaccession.

"It's still very abstract," he said of the issue.

Until this fall, that is.

Steiner says he jumped at a chance to participate in a "career-informed learning" project on campus that connected students with real-life problems.

"I've never been able to teach it where it is so firsthand and so live," Steiner said. "In this case, we don't know the outcome. It's this thriller where they're sitting on the edge of their seats."