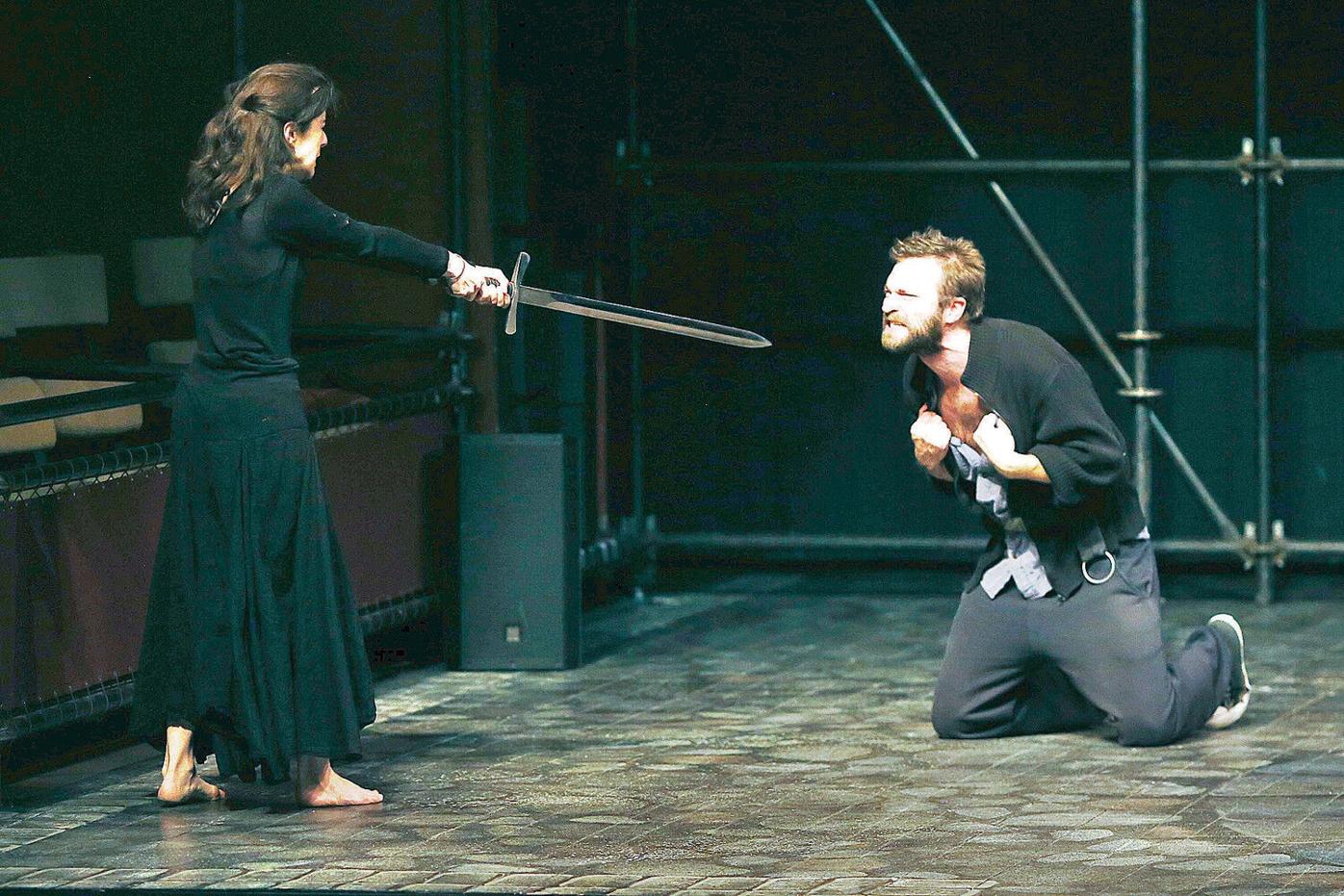 Caleb Gordon and Katrina Michaels in a scene from "Richard III." Gordon will be returning to Canada after the program to perform in The Shakespeare Company's production of "King Lear." 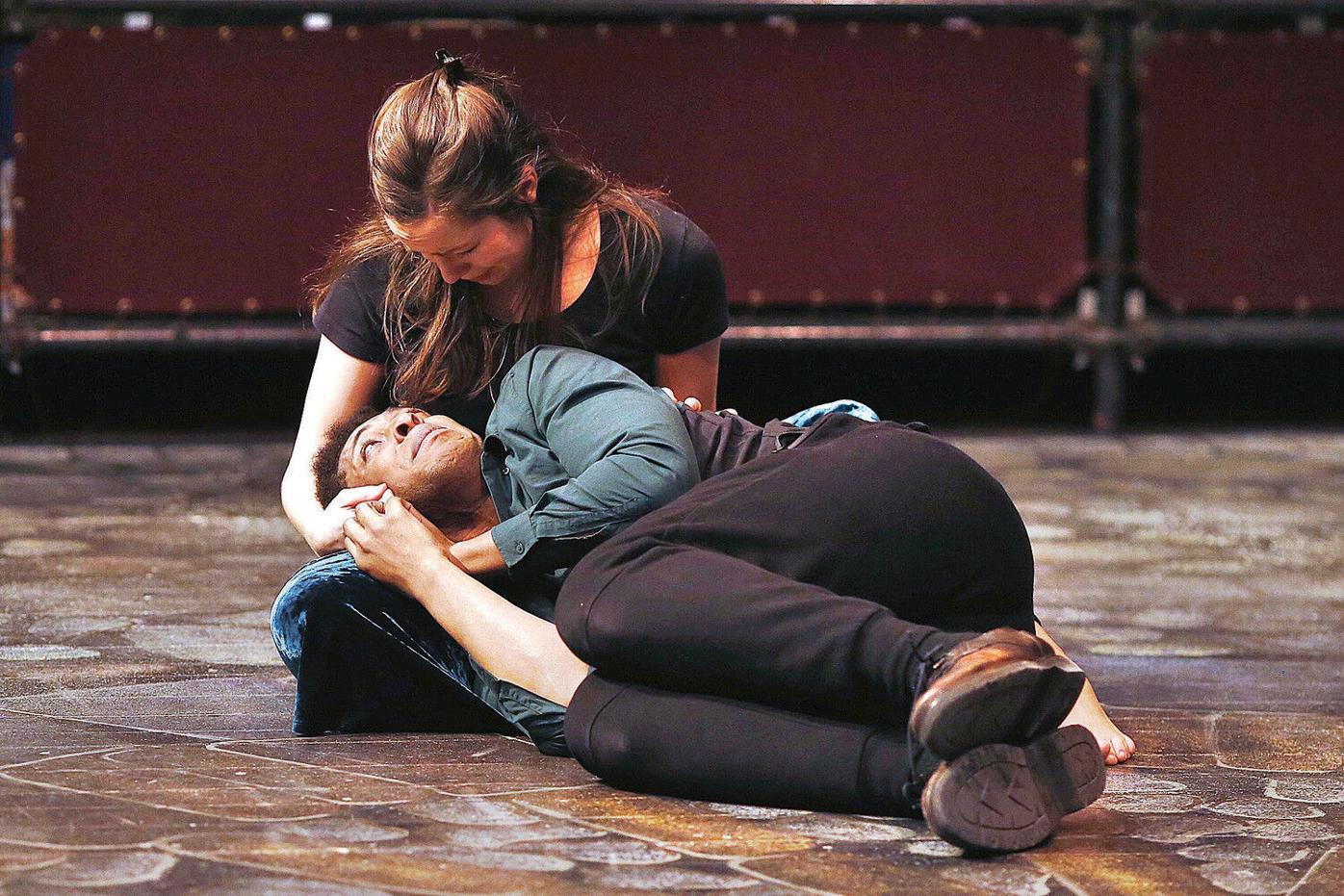 Madeline Maggio and Mario Haynes act out a scene from Henry VI. 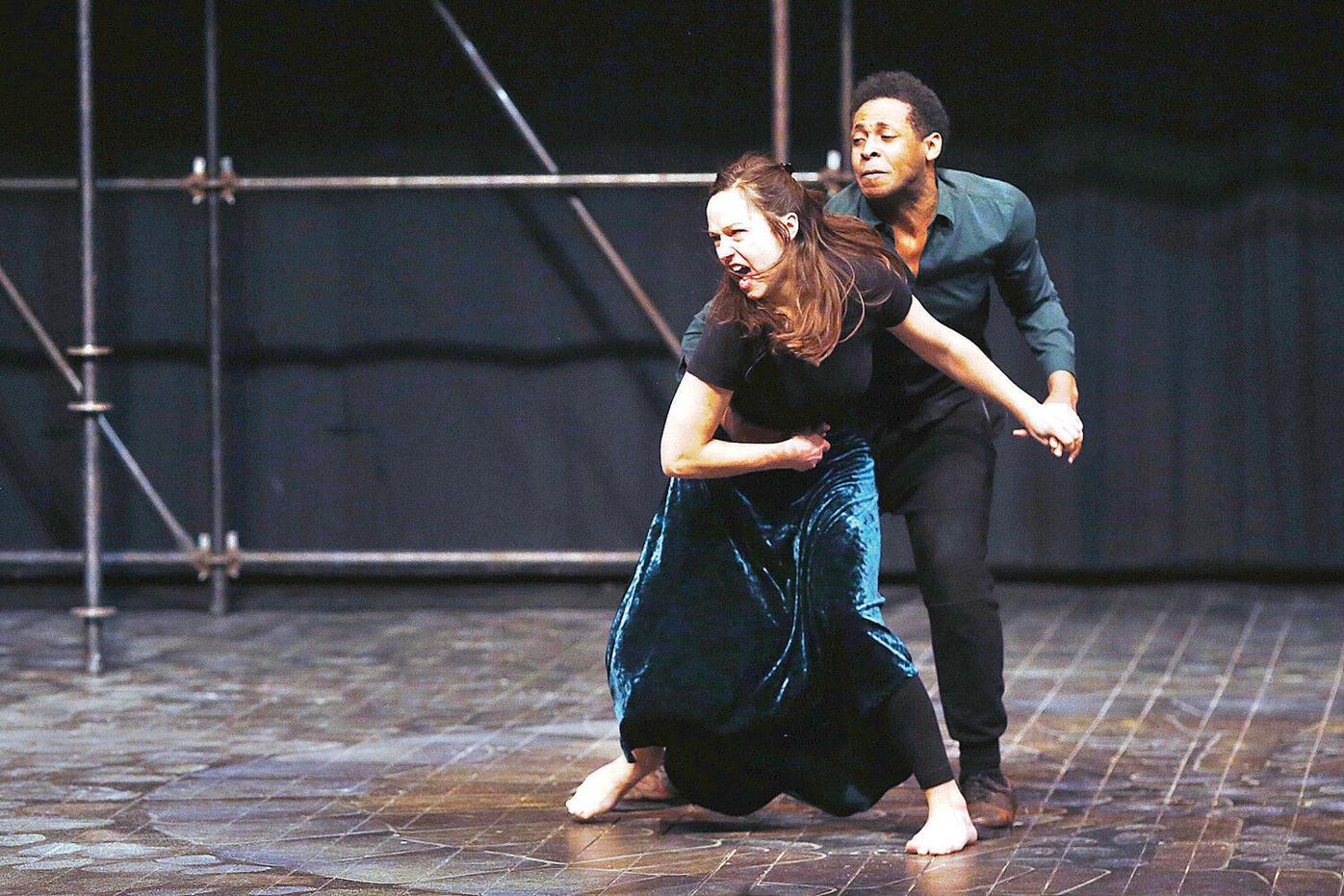 Madeline Maggio and Mario Haynes act out a scene from Henry VI during the culmination of Shakespeare & Co.'s month-long intensive program at the Tina Packer Playhouse in Lenox. 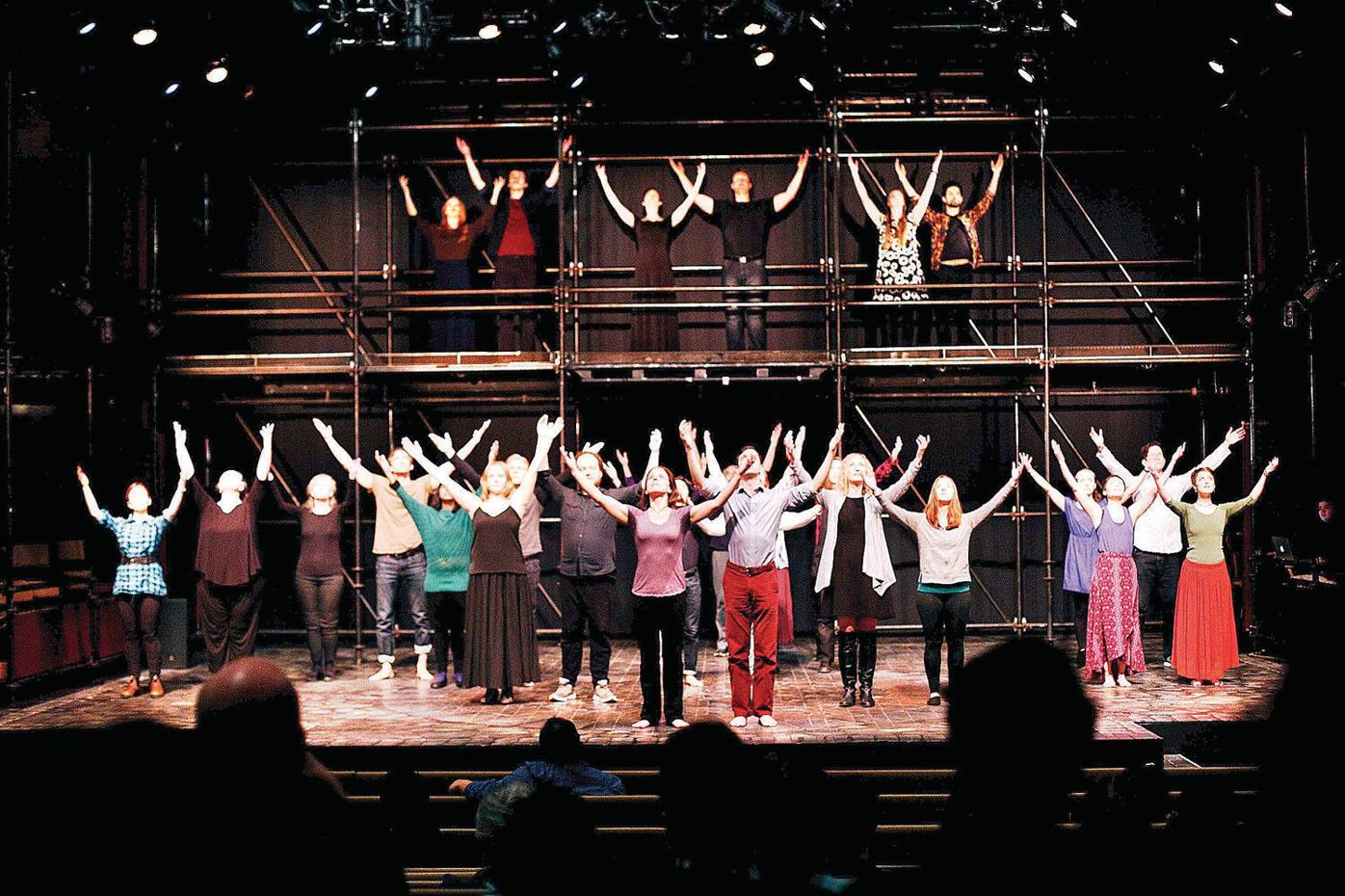 At the culmination of Shakespeare & Co.'s month-long intensive program, actors perform a choreographed dance before individual scenes at the Tina Packer Playhouse in Lenox. 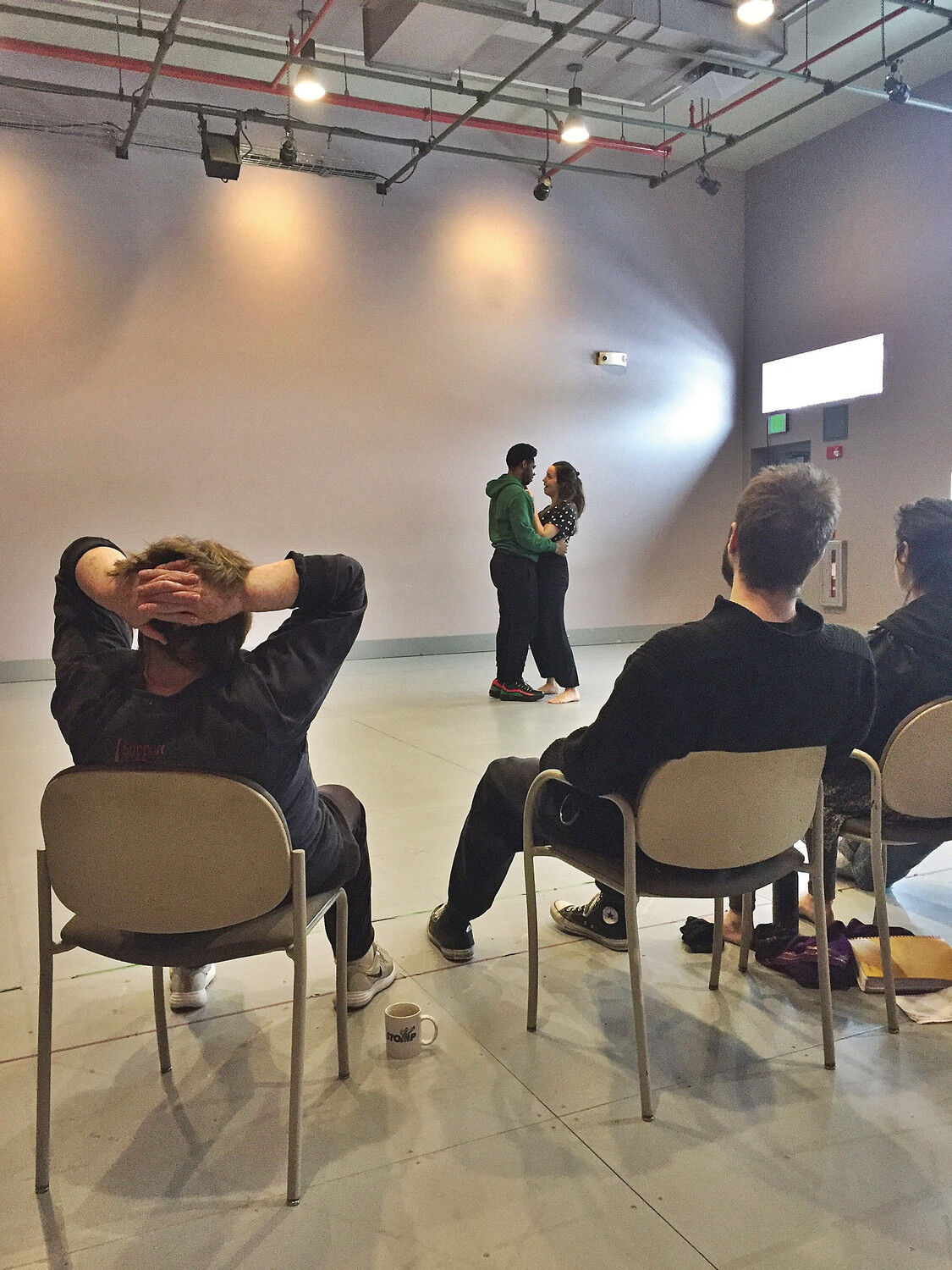 For six days per week, actors absorb the company's techniques from about 8 a.m. to 10 p.m. during the month-long intensive program. 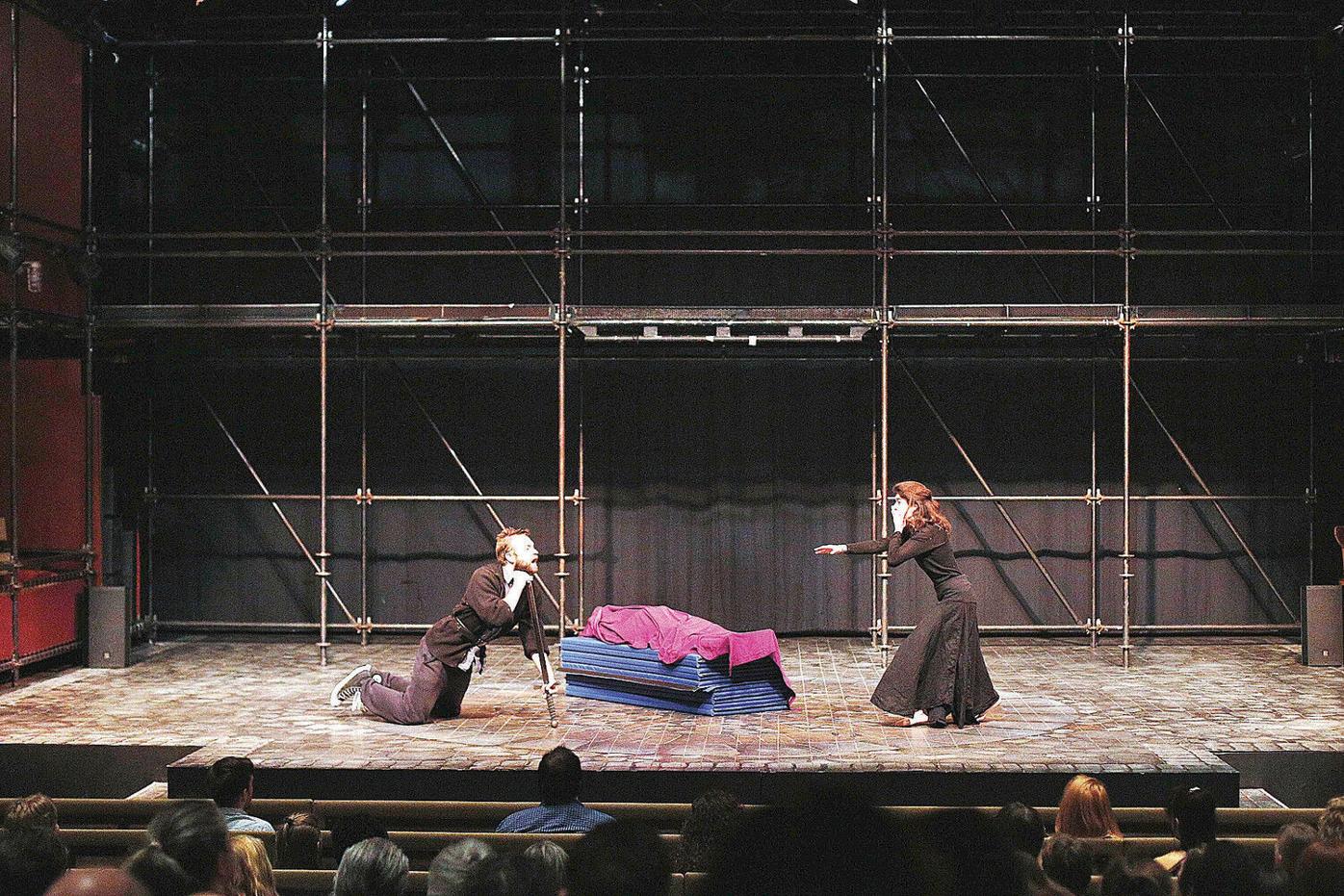 Caleb Gordon and Katrina Michaels act out a scene from Richard III during the culmination of Shakespeare & Co.'s month-long intensive program.

Caleb Gordon and Katrina Michaels in a scene from "Richard III." Gordon will be returning to Canada after the program to perform in The Shakespeare Company's production of "King Lear."

Madeline Maggio and Mario Haynes act out a scene from Henry VI.

Madeline Maggio and Mario Haynes act out a scene from Henry VI during the culmination of Shakespeare & Co.'s month-long intensive program at the Tina Packer Playhouse in Lenox.

At the culmination of Shakespeare & Co.'s month-long intensive program, actors perform a choreographed dance before individual scenes at the Tina Packer Playhouse in Lenox.

For six days per week, actors absorb the company's techniques from about 8 a.m. to 10 p.m. during the month-long intensive program.

Caleb Gordon and Katrina Michaels act out a scene from Richard III during the culmination of Shakespeare & Co.'s month-long intensive program.

LENOX — As she shouted Margaret's lines from a scene in "Henry VI, Part 2," Madeleine Maggio's rasp resounded in Studio 2 at Shakespeare & Company's Elayne P. Bernstein Theatre. To a casual observer at the Friday afternoon text and scene work class, the actress's failing voice inspired sympathy, for more than three weeks of 14-hour days at the Lenox institution's Month-Long Intensive training program could understandably fell even the strongest of vocal cords. But to the most notable onlooker in the room, Maggio's words just plain inspired.

"Your voice has more quality than it ever had before," Shakespeare & Company co-founder and former artistic director Tina Packer said from a nearby chair once Maggio and her scene partner, Mario Haynes (playing Suffolk), took a break.

Packer was neither offering a backhanded compliment nor being benevolent. At the four-week program that draws actors from around the world, cuts to the core of Shakespeare & Company's mission and, sometimes, informs the organization's casting decisions, voice signifies something much more than sound.

"In the first week, they've all brought individual speeches, so we work on those individual speeches, and the important thing is to connect the voice to the body to the meaning of the words. So, it's all a lot of physical and vocal work, but it's connecting on the deepest level to who they are so that their voices have real impact and [so] that you follow exactly what they're saying," Packer said later.

The voice work doesn't stop after week one; it's part of the actors' daily routine. After breakfast and a physical awareness warmup, the program's participants typically have 90-minute voice and movement classes. Other sessions focus on textual analysis, Elizabethan dance, stage fighting, clown, sonnet and scenes. For six days per week, actors absorb the company's techniques from about 8 a.m. to 10 p.m. It can be draining; after three weeks, Maggio acknowledged later in the day that her voice wasn't "100 percent there" in part because of fatigue. Yet, compensating for her loss in sound had expanded her range of feeling.

"All of these other emotions that I hold in myself and I don't [normally] let out, through my exhaustion they're coming out, and it's making me a more whole person. And it's making my voice more whole, as Tina said," said the 28-year-old Maggio, who grew up in South Egremont and has worked in Shakespeare & Company's education department.

Packer and Kristin Linklater co-founded the company in 1978. Linklater instilled the idea of freeing actors' natural voices into the company's curriculum.Education was a priority from the get-go.

"The company was founded [by] teaching artists, which is why we've always had such an emphasis on teaching," Packer said.

The organization is complex in that it cultivates long-standing relationships with actors, plucking some right from its classes, according to Packer.

"Most of the new talent comes in through this workshop," she said, mentioning Allyn Burrows, the company's artistic director, as an example.

This year's crop consisted of 51 actors of varying skill. They hailed from several countries, including Canada, Australia and Spain, and all of them had performed Shakespeare before, Packer said. The techniques they're taught are quite similar to those preached in the company's earliest trainings.

"A lot of it's still the same. It's just that we've gotten much better at what we do. I would say that [we have learned] to balance the work, so that if they're really going into a lot of physical work, we have to give them some work that is much more spiritual in its outlook," Packer said, citing lessons about the Elizabethan world view as one focus of mental activity.

Physicality doesn't always mean breaking a sweat. While playing Suffolk in Act 3, Scene 2 of "Henry VI, Part 2," Haynes was struggling with his posture. The Ellaville, Ga., native's heels lifted off the floor on occasion, and his hips had a tendency to drift behind his sternum. The scene, which involves Margaret and Suffolk expressing their affection for one another, requires up-close-and-personal intimacy.

"Putting myself into my acting work, that has always been kind of the encouragement of different acting pedagogies that I've attended, but never as much physically. And I'm very, very attracted to the physicality and marrying the physicality, the intellect and the emotional life of a character, which all exists within me," the 29-year-old Haynes said later. The American Repertory Theater/Moscow Art Theater School Institute for Advanced Theater Training at Harvard University graduate added that the company's emphasis on consent may have made him overly cautious. "I just have to remember that, in checking with my partner, to not shy away from something, because I felt like that was what I was doing today. So, going forward, I just have to remember to put my entire self in and to communicate with [my] partner," he said.

"Bring your pelvis into the room. Be on both feet, Mario," Vavasseur interjected at one point. Earlier in the scene, Vavasseur had acted as a human brace, straightening Haynes with his hands. Vavasseur completed the company's teacher training, a vital part of the program that enables the organization to maintain its lofty educational standards. Before Linklater left the company more than two decades ago, she had trained another 20 teachers, Packer estimated, and that knowlege-sharing has continued. New instructors represent the third generation of educators at the company.

"But some of the first generation haven't gone away yet," Packer quipped.

Nobody who watched the text and scene class could argue with that. The 79-year-old sporting Nikes and a black Shakespeare & Company shirt that featured the words, "Support Debauchery, Blackmail and Treachery," was engrossed.

"I know this is a difficult scene because you keep on parting and coming back," Packer said to Haynes and Maggio.

Later, after Katrina Michaels and Caleb Gordon recited some lines from Richard and Anne, respectively, in Act 1, Scene 2 of "Richard III," Packer asked Gordon, "What is your psychological deformity?"

Gordon wondered if she was referring to him or Richard.

The 27-year-old didn't reply directly, alluding to a past conversation instead. Packer knew what he was talking about, though, and indicated that she wanted this mental defect to manifest itself in a physical one. Gordon was soon ambling across the stage, his shoulders crooked and his body hunched.

"Today, I will be taking away the idea of placing my damaged psyche into my body," Gordon said, tongue-in-cheek, before dinner. Packer's direct query hadn't caught him off guard, though. The Alberta, Canada, native attended the Rosebud School of the Arts, where "most" of the instructors had completed this Shakespeare & Company training, he said.

"We actually work on this sort of stuff the whole time," said Gordon, who would be returning to Canada after the program to perform in The Shakespeare Company's production of "King Lear."

Rosebud is far from the only institution using the Shakespeare & Company pedagogy. Companies around the world draw from it.

"We're the leaders in: what does it mean to be a Shakespeare company?" Packer said.

The next batch of potential company advocates were off to a dance and movement class after their text and scene work. Instructor Victoria Rhoades would lead them through stretching and breathing exercises before they enacted their scenes silently, aiming to incorporate pushing, pulling, walking, circling, falling, stage-slapping, kissing, rising, touching, bowing, offering, touching and turning. It provided another means for the actors to identify with their scenes, which they would be sharing on the program's final day, Jan. 24. Michaels, who earned a bachelor of fine arts at New York University, said that the actors' focus has fostered admiration among them. In the past, program participants have formed their own companies, according to Packer.

"I feel like we fast-forwarded the superficial niceties that come with a lot of friendships, and there's a great deal of respect and affection that is shared [in] that everyone who came here invested both time and money and risks," said Michaels, alluding to the $4,750 tuition cost (including room and board). "There's a tremendous sense of risk in revealing yourself and in watching everyone else do that around you. [It] inspires a lot of bravery and love for the group."