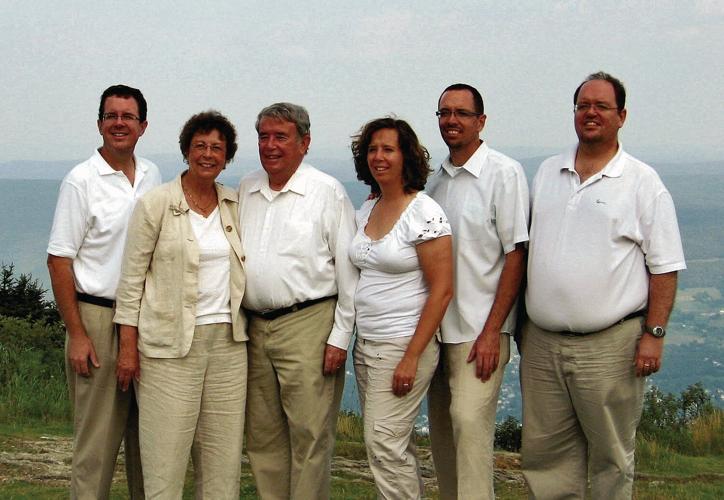 Lynne and David Roberson, second and third from left, celebrate their 50th wedding anniversary at the summit of Mount Greylock along with their children, from left, David, Jennifer, George and Mark. 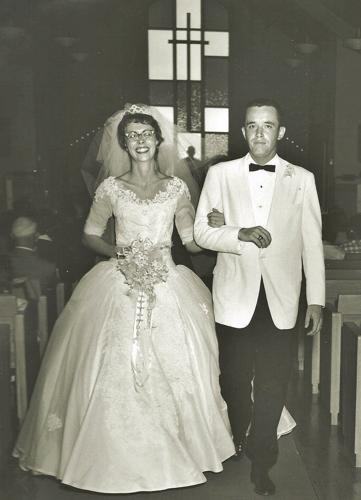 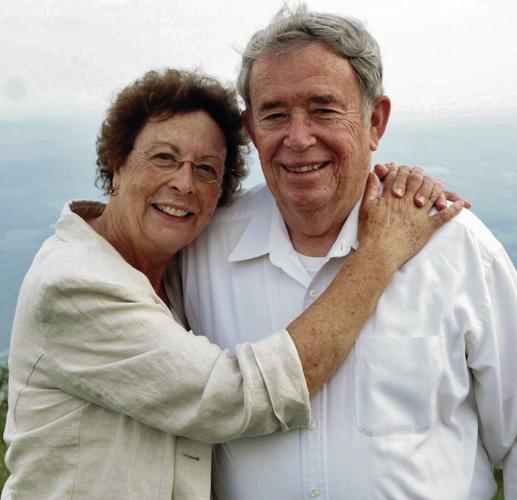 Lynne and David Roberson celebrate their 50th wedding anniversary at the summit of Mount Greylock.

Lynne and David Roberson, second and third from left, celebrate their 50th wedding anniversary at the summit of Mount Greylock along with their children, from left, David, Jennifer, George and Mark.

Lynne and David Roberson celebrate their 50th wedding anniversary at the summit of Mount Greylock.

David and Lynne Roberson's first date was an eye opener toward six decades of wedded bliss.

While as students at the University of Kansas in fall 1958, the longtime Berkshire residents went on a blind date arranged by another couple who thought they would hit it off.

In a letter shared with County Fare, Lynne (nee Rhodes) says that neither she nor David initially were impressed with the other after looking at their pictures in the 1957 KU yearbook. The disappointment quickly would turn to love at (in-person) first sight when they met for coffee on a snowy, December day near the end of the semester.

"When I saw him walking up the steps to my dorm, Grace Pearson Hall, I actually prayed, 'let this be the guy!' He really took my breath away. And, evidently, he felt the same way," Lynne wrote.

After a seven-month courtship and yearlong engagement, the Midwesterners were married July 10, 1960.

On Friday, David, 83, and Lynne, 81, wouldn't let the coronavirus pandemic interfere with their celebrating their 60th anniversary, at Craneville Place in Dalton. The staff of the senior living facility helped stage a mask-wearing, social distancing party outside the senior living facility where David has been a resident for the past year. Lynne lives nearby, in Pittsfield, to stay close to her husband.

"We find we are celebrating our anniversary in a way that we had not imagined, but still, we are together, and we are happy in our love and have come to peace with the 'new normal,'" Lynne said. "The staff at Craneville have been instrumental in helping us to make the drastic change, and we continue to be happy and try to take joy in every day."

The Robersons spent a portion of their marriage constantly uprooting their lives before settling in the Berkshires 44 years ago.

The KU graduates lived throughout the country as David served in the Air Force, at one point becoming a navigator/bombardier on B-52s during the height of the Cold War. He eventually left the military and put his accounting degree to work, while Lynne held several jobs in the health care field.

In 1976, the Roberson family — by then it included three sons and a daughter — moved to Lenox, as David got a job with Sheaffer Eaton Textron in Pittsfield. Lynne went back to school and got her master's degree in education at the University of Massachusetts-Amherst, becoming an elementary school teacher.

The couple, long since retired, continue to enjoy their life together and finding that the Berkshires were a great place to raise a family.

"Our children thrived in the joy of snow and all the wonderful advantages of living in an atmosphere valuing education and art and music and winter and year-round sports," Lynne said.

The Elizabeth Freeman Center has received $10,000 toward the prevention and intervention of sexual-based violence in the Berkshires.

The money will help finance the center's Berkshire Believes program to increase awareness of sexual violence in Berkshire County, build community capacity to identify and prevent sexual violence, and give frontline responders enhanced knowledge and skills to help survivors of sex trafficking.

The grant from the Women's Fund of Western Massachusetts is among the five totaling $45,000 the public foundation recently awarded in the four-county region to programs that the foundation says show the most promise in supporting women and girls to take charge of their lives in abusive situations.

County Fare, a weekly column featuring "tales from throughout the Berkshires," is compiled by Eagle staffers.