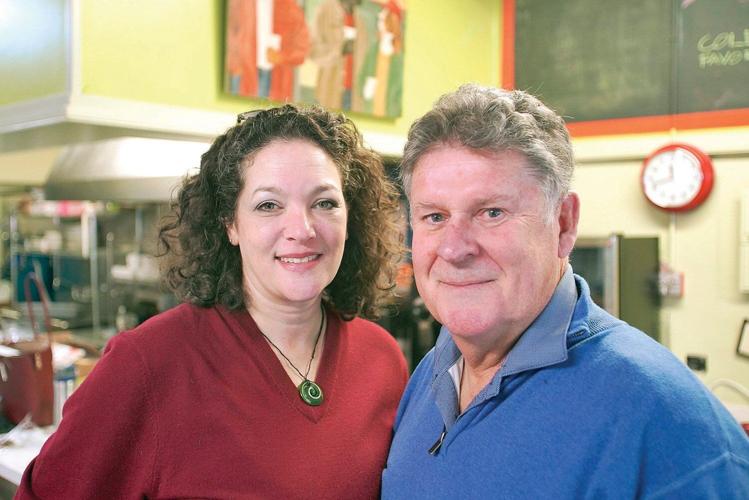 Tiffany Landry, left, and Chris Greendale pose inside the Elm Street Market in Stockbridge. They plan to restore it as a community market and gathering center for the town. 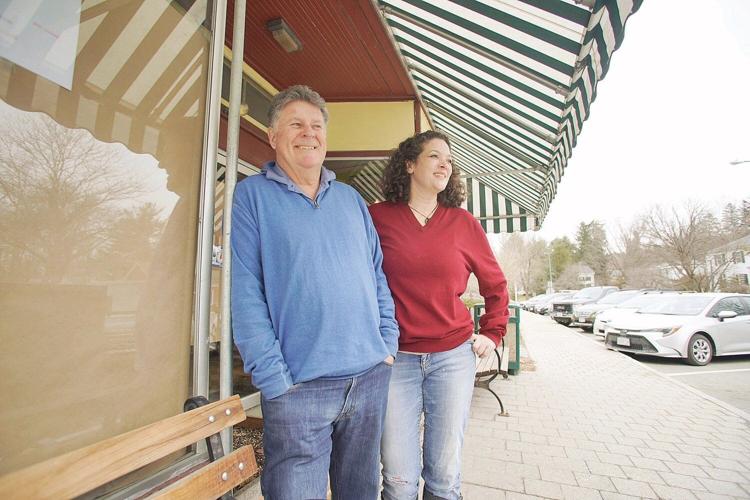 Chris Greendale, left, and Tiffany Landry stand outside the Elm Street Market in Stockbridge. They plan to restore it as a community market and gathering center for the town. 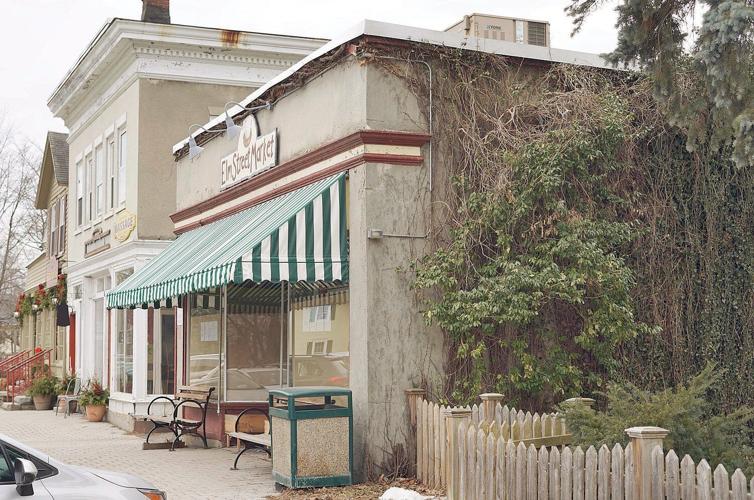 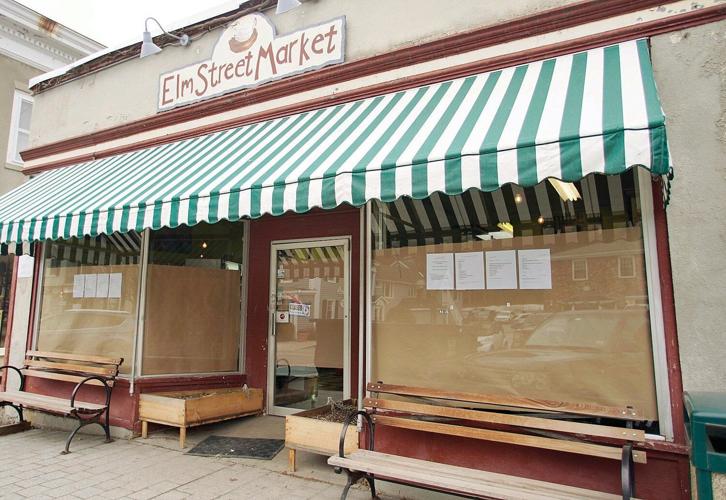 Tiffany Landry, left, and Chris Greendale pose inside the Elm Street Market in Stockbridge. They plan to restore it as a community market and gathering center for the town.

Chris Greendale, left, and Tiffany Landry stand outside the Elm Street Market in Stockbridge. They plan to restore it as a community market and gathering center for the town.

STOCKBRIDGE — Amid high hopes and small-town enthusiasm, residents are eagerly awaiting the rescue, restoration and revival of the Elm Street Market, a community center for close to a century that recently had fallen on hard times.

New owners Christopher Greendale of Stockbridge and Tiffany Landry of South Lee purchased the building and business at 4 Elm St. on Wednesday.

They are intent on rekindling the warmth and camaraderie locals and visitors enjoyed until Rajeev Verma purchased the market from Main Street Hospitality — parent company of the Red Lion Inn and The Porches in North Adams, among other holdings — in January 2018.

The couple met a year ago at the Red Lion Inn, where Landry worked until recently. "She served me a drink, and that was that," Greendale quipped. "We are co-committed."

"People came to us urging that the market be brought back to what the community needs," Landry said.

"That's the single reason we are doing this," Greendale said. "Everyone I've spoken to in town wants to come in here to chat with friends, exchange town gossip. We're getting a universal outpouring of enthusiasm from the locals. We're getting letters from people we don't know. This is called getting back to our roots in this town."

A group of faithful, longtime, early morning regulars is expected to beat a path to the market as soon as it reopens.

Last summer, over lunch with Select Board member Roxanne McCaffrey, Greendale mentioned that he was upset and no longer patronized the market, whereupon she suggested, "Why don't you buy it as a community service?"

"This was a hub in town, a congregation point. We all go across the street to get our mail, we go to the bank, we do our errands," said McCaffrey, a catalyst for the reclamation of the market.

"There was a lot of dismay about the deterioration here over a year or so," she pointed out. "There were a lot of people disappointed that we had lost yet another service in this town, and we've lost so many. Now, there is just unbridled enthusiasm, people are cheering, they're so happy. We're all really jubilant."

After chewing over ideas, Greendale and Landry formed two companies to purchase the market and its building. Greendale Enterprises LLC is now the owner of the building, and Greendale-Landry LLC owns the market.

"It'll be open when it's ready; there's a lot to be done," he stated, adding that mid- to late March is the earliest possible target.

"As soon as possible, but we want to do it right," added Landry.

The goal is to restore a warm, welcoming atmosphere and offer a wide range of attractions for customers — a return of the deli, a self-serve salad bar, a hot bar with soups, meats and vegetables, grab-and-go items, rotisserie chickens, house-made sausages and an emphasis on farm-to-table products, especially meats and eggs, fruits and vegetables, as well as pharmaceuticals, Barrington Coffee and, definitely, newspapers.

"That's something everyone I have spoken to has asked for, so the newspapers will definitely come back," said Landry. She is taking requests from residents on what else to carry to meet community needs, "so that I know what to stock my shelves with."

"Think of it as a small grocery with warm, soft, inviting decor," Greendale suggested, a market "that's going to be super."

"It's really important that people walk in here and get a happy vibe," he said, "so employees will be chosen based on their attitudes. This is going to be a very happy place."

At the cafe counter and tables seating a total of about 25 patrons, breakfast will be offered 6 a.m. to 2 p.m., lunch from 11 a.m. to 4 p.m. followed by four or five daily dinner creations from 4 p.m. Corn chowder will be a daily mainstay. Sunday brunch from 11 to 2 is under consideration.

The business hours will be seven days a week, with closing time at 7 or 8 p.m.

"I want the doors open as long as there's a need," Landry said. "And we want to keep the pricing `local-friendly.' We'll have the portions right, we want people to come in, feel good about their experience here, and want to come back."

A staff of eight to 10 full- and part-timers will be hired, with Nathan Wagner, who recently purchased a farm in Windsor, as general manager. He was a main dining room server at the Red Lion for 10 years.

Greendale immigrated to the U.S. from New Zealand in 1968 to attend Southern Illinois University on a tennis scholarship. He played professional tennis briefly before embarking on a career in high tech. After moving to Stockbridge, in 1996 he purchased and spent four years restoring Broad Meadow, a former inn on North Church Street, as a home base.

Two years ago, Greendale sold the company he founded, Clouds Technology Partners, to Hewlett-Packard and decided to stay in Stockbridge full time instead of commuting weekly to his condo in Boston.

"I count the Berkshires as my home, I ride around and see the mountains, and just smile," he said. "This is beautiful."

Landry, a bartender at the Red Lion Inn until recently, is from New Orleans, arrived in the Berkshires in 2010 and has 30 years of experience in the food and beverage industry.

The Elm Street property was built in 1914 by architect Joseph Franz, who later designed the Tanglewood Shed and the Jacob's Pillow Dance Theatre. It was a market from the start — McCormick's in the 1920s, followed by Mc-Cormick and Price and then Abdalla's.

It was operated by James and Midge Shanahan as Shanahan's Market from 1978 to 1997. The Fitzpatricks bought it after the Shanahans retired and operated the business for 20 years as part of its Main Street Hospitality portfolio until they sold it to Verma for $450,000.

A company called Mountaintop Cannabis Cultivators LLC hopes to start growing marijuana by next year on property off Route 8 in Windsor. They'll pitch their plan to residents Dec. 18.

It took less than two months, from filing to approval, for an outdoor cannabis farm to secure a special permit in Windsor. One of its principles estimates yearly gross revenue of up to $14 million.