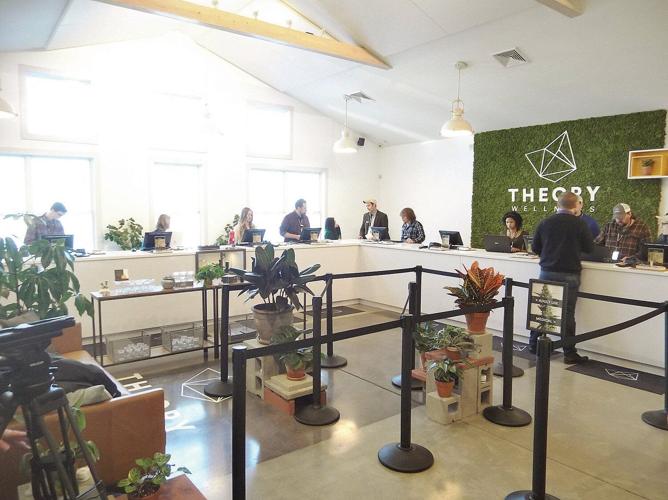 Staff prepare early Friday for the first day of retail marijuana sales at Theory Wellness in Great Barrington. The shop was to become the first in Berkshire County to legally sell marijuana for recreational use. 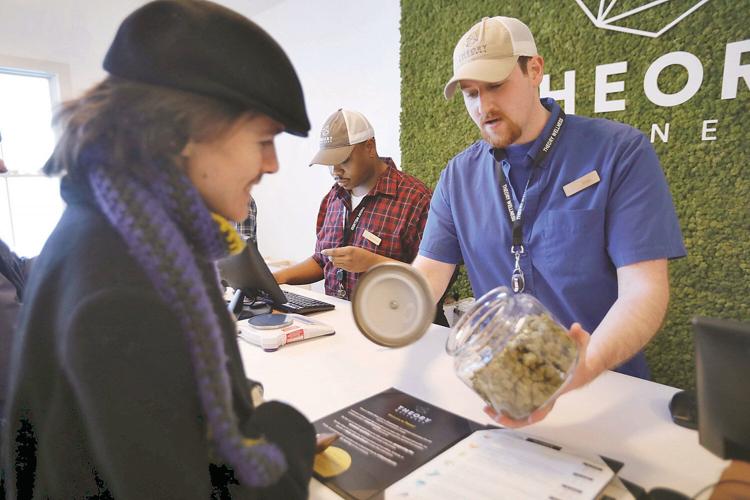 Oliver Brown gets a whiff of Wedding Cake cannabis with the help of Tom Terranova on Friday, the first day of recreational marijuana sales at Theory Wellness in Great Barrington.

Staff prepare early Friday for the first day of retail marijuana sales at Theory Wellness in Great Barrington. The shop was to become the first in Berkshire County to legally sell marijuana for recreational use.

Oliver Brown gets a whiff of Wedding Cake cannabis with the help of Tom Terranova on Friday, the first day of recreational marijuana sales at Theory Wellness in Great Barrington.

GREAT BARRINGTON — Braving temperatures of around 12 degrees, about 15 people were gathered outside Theory Wellness shortly before 9 a.m. Friday, waiting to become the first customers to buy marijuana legally in Berkshire County.

That number grew to nearly 100 just before the doors were set to open at 10 a.m., and the line remained steady at about 75 to 100 customers throughout the day.

Two gas heaters were set up near the entrance. A table with free coffee stood closer to the road.

"It's history in the making " said Oliver Brown, a Great Barrington resident who is second in line. Brown said he wants to try cannabis for "aches and pains" and said he's still learning about the products.

Theory has joined the growing number of stores across the state to begin sales of marijuana to the general public — no medical card required. Marijuana use for adults 21 and up was legalized through a 2016 ballot referendum.

Leo, an occasional cannabis user who declined to give his last name because he lives in New York state, said he's here to witness the start of what he says will be an economic boom — and he hopes New York isn't far behind.

"I'm curious," he said, and he likened to a historic moment akin to the end of prohibition in 1933.

Inside, it feels like, well, a party — even before the first customer walks in.

"We're excited," said Theory CEO Brandon Pollock, who explained the purchase limits per customer on products like Strawberry Fields, Banana Split and Wedding Cake, which at $20 a gram "offers a cerebral presence followed by a strong body high."

Pollack said the company has 25 staff on hand for the opening. He anticipates a typical staff of 10 to 15.

Theory isn't the only company to up staff levels. Pollock said that in anticipation of this opening, the McDonald's next door is also increasing staff, maybe permanently.

Not hard to see why. Pot by the name of Banana Split might have that effect on the throngs flocking here.

"We're bringing in a lot of customers," he said.

The company, whose growing facility and a medical dispensary is in Bridgewater, began by selling medicinal cannabis in Great Barrington in 2017 before applying for the recreational license, which it received on Dec. 13.

New England Treatment Access, or NETA, in Northampton was among the first two shops in the state to sell cannabis on a retail basis. Since then, the state's Cannabis Control Commission has cleared several other shops across the state for retail sales.

On Tuesday, Temescal Wellness will be the first retail provider in Pittsfield.

And with the dawn of legalized retail marijuana comes tax revenues for host communities. Retail customers pay a total of 20 percent tax on marijuana purchases — including a 3 percent tax that goes directly into local coffers.

Theory Wellness, which projects annual sales of $6 million to $8 million, would bring around $180,000 to $240,000 in additional revenue to Great Barrington.

Customers with medical marijuana cards, however, are not taxed on their purchases.

Ariane Blanchard is one.

A West Stockbridge resident, Blanchard has been using medical marijuana for the last 2 1/2 years to treat severe inflammation and insomnia. It's also helping ease pain from a recent foot surgery.

"It's much better than any of the prescription, over-the-counter stuff, without the side effects," she said, referring to pharmaceuticals that made her "clammy and nauseous."

Her only concern now is that the place will get too busy until the four other marijuana retail shops in Great Barrington open.

But outside, it was less zoo-like. As of around 10:30 a.m., the line was orderly, parking was aplenty — the nearby overflow unused, and Route 7 traffic was flowing.

"Logistically, we didn't know what we were going to get," Storti said.

Logistics are the reason Alexander Farnsworth came this morning. Farnsworth and his partner, luxury fashion designer Adam Lippes, are opening another retail marijuana shop just down the road on North Main Street this spring.

"I came to support Theory and also see, from a business perspective, how they're handling the opening," said a bundled-up Farnsworth, whose pot boutique project has changed location from the former United Methodist Church on Main Street to a building further north for reasons that include more parking.

And Storti, realizing that this opening fever might not subside anytime soon, said the real test might come on Saturday, given that it's a weekend, and temperatures are expected to rise.

"Tomorrow might be a little more challenging," he said.

By Friday afternoon, marketing director Thomas Winstanley said the line outside would be shut down at 6 p.m. in anticipation of a 7 p.m. closing. The shop is open from 10 a.m. to 7 p.m., seven days a week.

Staff continually replenished inventory throughout the day, and he emphasized there is ample stock for the coming days.

"We have a healthy supply," he said.

Winstanley didn't have specific figures on how much was sold or how many customers were served, but he said it was a good opening, with "hundreds" of customers passing through this high-security shop, all in good spirits.

"Everyone was respectful and enthusiastic," he said, "and really patient, too."