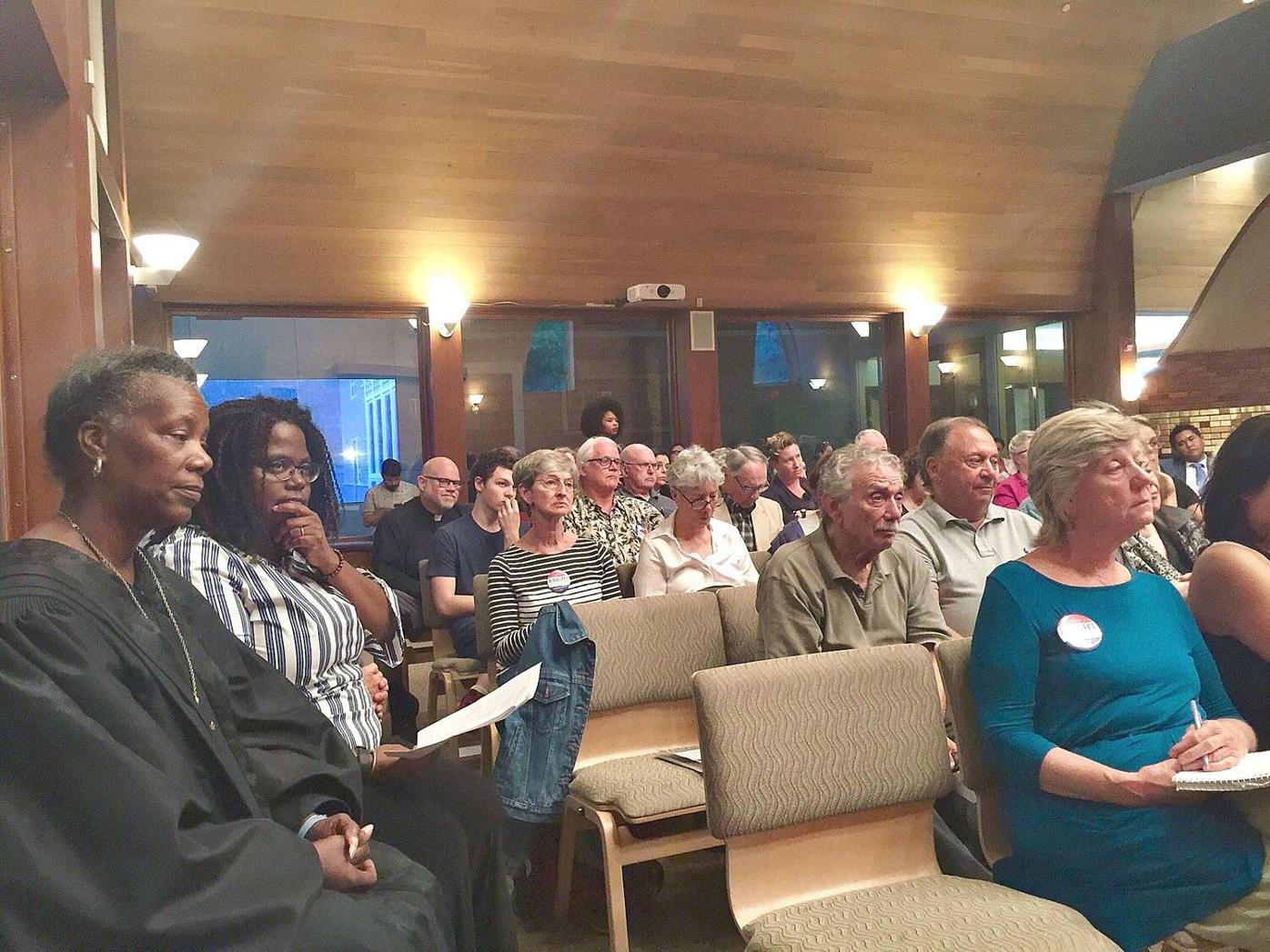 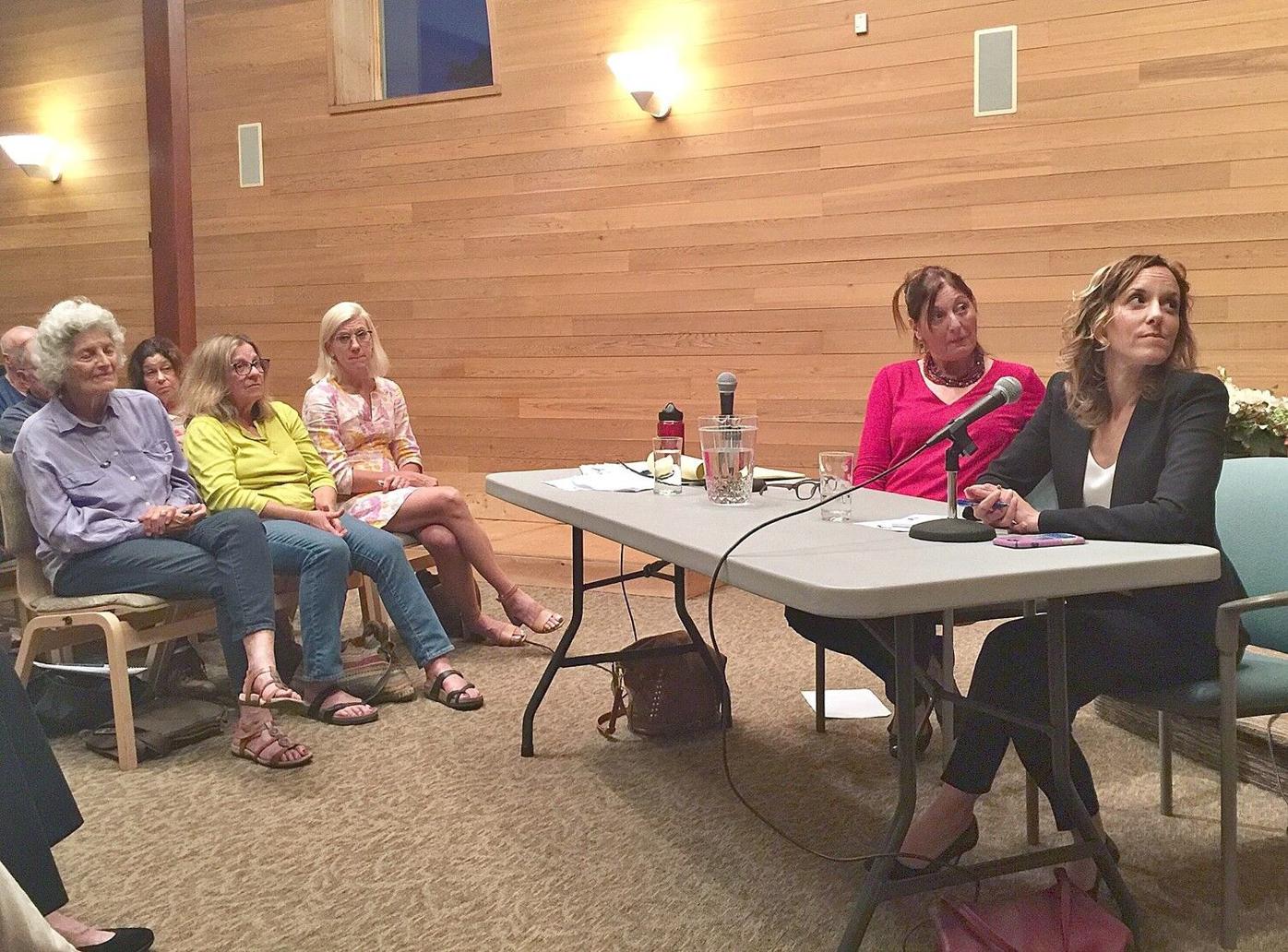 Judith Knight, second from right, and Andrea Harrington, right, candidates for Berkshire District Attorney, were part of a forum Thursday at Hevreh of Southern Berkshire that focused on issues of racial justice and equity.

Judith Knight, second from right, and Andrea Harrington, right, candidates for Berkshire District Attorney, were part of a forum Thursday at Hevreh of Southern Berkshire that focused on issues of racial justice and equity.

GREAT BARRINGTON — In Massachusetts, blacks are locked up at almost eight times the rate of whites.

Nationally, that ratio is 6-to-1. And for Hispanics in the state, it's nearly five times the rate for whites, also higher than the national average.

How will the next district attorney's attitudes about racial justice and equity affect how people of color move through the criminal justice system in Berkshire County?

Candidates Andrea Harrington and Judith Knight each told an audience at Hevreh of Southern Berkshire on Thursday that the District Attorney's Office, with its discretionary power over the lives of residents, needs to start collecting data about who is being prosecuted and why. They say this will paint a picture of any possible bias toward blacks, Latinos and the poor of Berkshire County.

"We don't really know the unconscious bias, and how it might be running the show," said Knight, whose 30-year legal career includes criminal defense and prosecution work.

Knight said that keeping track of factors including gender, race and age of an offender, and the charges and bail amounts in each case, "would be a way of keeping the DA's office honest."

Harrington, whose 15-year career as an attorney includes appellate work for death row inmates, juvenile court and labor law, said transparency with the public is crucial in this regard, and that data are "essential."

She said that right now, the way the DA's office operates is hidden. Harrington said she calls the office a "black box" for this reason.

"They don't tell us what their policies are ... we can only go by way of anecdote," she said.

Current District Attorney Paul Caccaviello, who succeeded David Capelesss in March, was unable to attend the forum, because of a previously scheduled campaign event in Adams. He told The Eagle in a Friday phone interview that he, too, is interested in advancing a better understanding of any racial bias that might exist in his office.

Caccaviello, who has worked in the DA's office for more than two decades, said all DA's office staff completed racial bias training in July, conducted by the local nonprofit Multicultural BRIDGE, which, along with Hevreh and Berkshire Interfaith Organizing, hosted the forum, to which 134 people came from towns around the county.

"You've got to examine the issue in order to initially recognize it, so you can eventually address it," Caccaviello said, noting that the Criminal Justice Reform Act, signed by Gov. Charlie Baker in April, is what initially fostered this conversation in the DA's office.

" 'What are we blocking out when we look at a case, for example," Caccaviello said.

Voters will decide in the Sept. 4 primary election which of the three Democrats will be the next district attorney. There is no Republican candidate on the ballot.

Harrington and Knight said that examining possible racial bias in the DA's office is key, and both are in favor of creating a Citizen's Advisory Board to review data. Caccaviello said that while the idea is "interesting," he wondered how that also could be kept free of bias.

Caccaviello said criteria for data collection should be developed with the help of an outside professional, and that making changes in the DA's office alone won't solve the wider problem of "the root of why people get to court."

Blacks constitute about 4 percent of the population in Berkshire County.

But Knight said the reason for the disproportionate number of blacks and Latinos that she sees every day in a mostly white courtroom should be examined.

"I can't believe my eyes," she said. "When eight black men will come out in orange suits chained together and everyone else in the courtroom is white."

Harrington hinted that vulnerable populations are still being swept into the system as part of an older mission.

"What we see in the DA's office right now is a continuation of the 1980s war on drugs," she said.

Harrington also said that keeping track of victim data also will help inform the office about another factor that influences the fate of an offender: a victim's race.

"Blacks convicted of capital murder are more likely to get the death penalty, depending on the race of the victim," she said.

Harrington and Knight said too few blacks are sitting on local juries.

"Often, my client is black," Knight said. "Why don't we have more people of color on our juries? Because we know they are in our community."

Harrington said that, as DA, she would want to look closely at whether potential jurors who are black are being kicked off juries because of their race — "a nationwide problem."

Knight disagreed that this is a problem in Berkshire County, saying that "the DA's office right now is careful not to strike black jurors — it could come back on appeal."

How to tackle the race issue with regard to juries? Knight said getting more people of color registered to vote is the way.

Knight also said that, as DA, she would want to make sure there was a practice of hiring diverse staff.

When asked about this, Caccaviello said the office has five staff "of diverse background," and explained that budget restraints do not allow the office to offer a salary that might attract someone to the Berkshires.

"You do want a diverse office," he said. "[But] it's not an urban area. It's an issue all around the Berkshires."

When asked how he attends to any possible bias in himself, Caccaviello said the BRIDGE training, as one example, "forces you to explore the issue."

"They call it implicit bias for a reason," he said. "The training really opens your eyes to that."

Harrington and Knight also were asked by moderator Rabbi Neil Hirsch how they personally keep "white privilege" from being a "gateway to white supremacy."

Harrington said she tries to be "humble and kind to make [clients] feel comfortable."

"The legal community is probably even whiter than the rest of the community," she added, noting that this can create "devastating" communication barriers that she tries to knock down.

Knight said she got into criminal defense work because she has "always had a social conscience," and "because that's where people's lives are on the line."

"People that are marginalized — we need to understand what their lives are like," she added.

Caccaviello said the "social ills" and "inequalities like poverty, lack of education, [lack of] opportunity" need to be addressed first, since the criminal justice system is one of the last stops for people who have suffered, or been discriminated against.

"We're sort of the basin of everything that's happened to a person before they get [to court]," he said. "When it comes to court, now you've got a victim in the case ... a complicating factor."