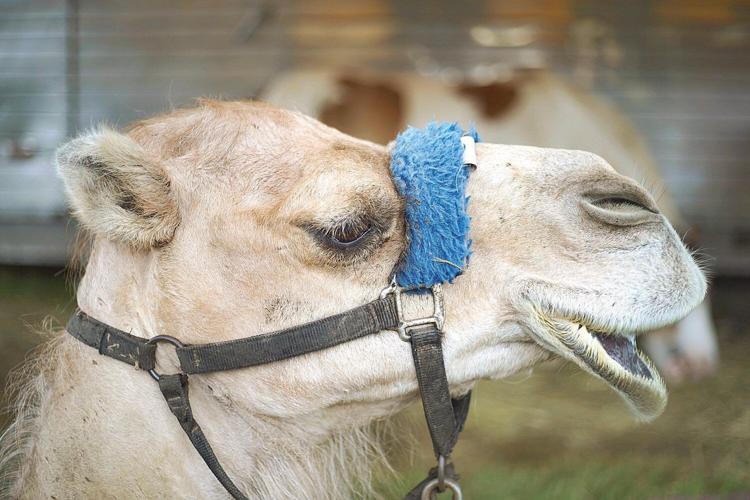 A camel enjoys breakfast as workers set up the Zerbini Family Circus behind the American Legion in Dalton. 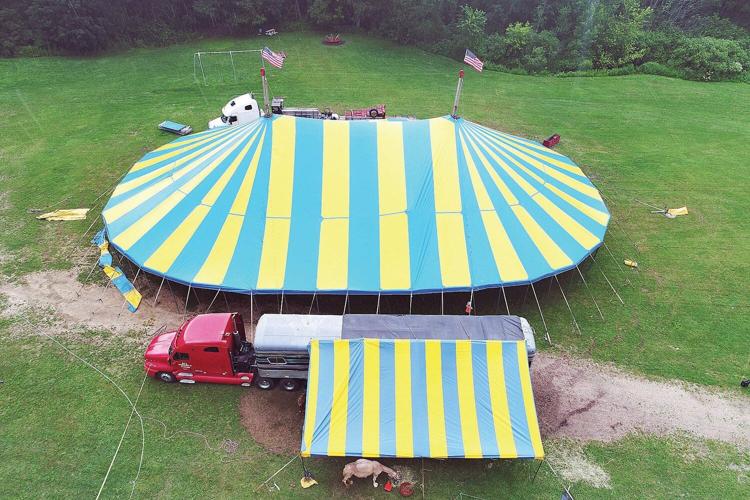 Workers set up the Zerbini Family Circus tent behind the American Legion in Dalton for a fundraiser event sponsored by the Dalton Lions Club. The club recently voted to no longer host traveling circus acts.

A camel enjoys breakfast as workers set up the Zerbini Family Circus behind the American Legion in Dalton.

Workers set up the Zerbini Family Circus tent behind the American Legion in Dalton for a fundraiser event sponsored by the Dalton Lions Club. The club recently voted to no longer host traveling circus acts.

DALTON — The Dalton Lions Club will no longer host traveling circus acts that have drawn protests, parting ways with a longtime fundraising tool — and with an outspoken member who championed such events.

Over 26 years, the club raised $76,000 by providing a venue and market for itinerant circus performers, then steering proceeds to its charitable causes.

But at a recent meeting, members of the nonprofit civic group voted to halt any involvement with acts like the Kelly Miller Circus or the Zerbini Family Circus, two of its recent partners.

"It is time to move on to other projects," the club's president, Robert Bishop, said in a statement.

"We notified the circus that it's not happening," he said in an interview.

Privately, the club concedes the change in direction is a response to opposition from groups like Berkshire Advocates for Animals. Local protests of the club's annual circus event began in 1996 and continued through the final performance this past summer.

While local opponents cheered the decision, the turnabout does not please Dan McGinnis Sr., the club's most vocal defender of the circus tradition.

McGinnis, who is no longer a member of the Dalton Lions, said he was not aware that the future of hosting the circus was on the agenda of the recent meeting.

"I would have fought that with my last breath," he said. "It's very sad that it turned out that way. I'm very upset with them. I put a lot of years in there. I wish them well."

In a statement, Bishop thanked residents and local business owners who supported the club by attending the circus for more than a quarter century. He also cited McGinnis "for all of his hard work with the circus."

In the last few years, pressure has mounted in Berkshire County — and elsewhere — to forbid performances of nondomesticated animals. A warrant article banning circus events failed to pass at Dalton's annual town meeting in 2015 by a 2-1 margin. But the following year, the Pittsfield City Council endorsed a ban, passing the measure 8-3.

McGinnis helped lead opposition to both bans, in person and in regular letters to the editor of The Berkshire Eagle.

In a 2017 letter, McGinnis wrote to explain why the club did not accept a donation of $5,000 from Allen Harris, CEO and chief investment officer of Berkshire Money Management. Harris had offered up to $25,000 to help the club cover lost income from circus ticket sales if it agreed to work with him to devise other ways to raise money.

"The Lions will not be pressured into accepting any such offer," McGinnis wrote. "It was an attempt at political strong-arming masquerading as philanthropy."

McGinnis has refuted claims of animal mistreatment by circus companies, despite documentation gathered by government groups. He has also said "animal rights extremist organizations" engage in campaigns of misinformation.

And he has stressed that the Dalton circus events were well-attended. "It's brought a lot of money into town," said McGinnis, a recipient of the Melvin Jones award from the Lions, the club's highest honor. He challenged the club to explain to low-income families why free tickets to the shows will no longer be available.

Harris said Tuesday he was moved and heartened to learn the club will discontinue its association with any circus.

"The treatment of animals is very important to me," Harris said. In his view, activities that take advantage of animals are "a reflection of the worst part of humanity. I'm really getting emotional seeing that we're making some progress."

Terry Carlo, of Pittsfield, who protested Dalton circus events for much of two decades, said she began campaigning for animal welfare out of concern for the treatment of circus elephants, believing that the strain of transportation and exposure to heat endangers them. She noted the death of a 54-year-old elephant, Beulah, at last month's Eastern States Exposition in West Springfield.

"It just didn't seem like a life for an animal," she said.

This summer, Carlo and the roughly 15 members of Berkshire Advocates for Animals protested shows by the Zerbini Family Circus in Dalton. The group included six students from Taconic High School. "We were really proud of them."

Carlo applauded news that 23 years of protests can be called off in Dalton. "That's amazing. It's great," she said.

She predicted that community support for the club will rebound with new giving, following the decision. "We don't have anything against them," she said of the Lions. "They do good work."

Marnie Meyers, of Windsor, another longtime critic of circus operations, said she also wants to help the Dalton Lions transition to new forms of fundraising.

"We will try and help them raise money in some other way," Meyers said.

Though she acknowledged that attendance at past circus performances appeared to be robust, that popularity might have been waning, leading the club to seek a change. Bishop, the club leader, said attendance was down in 2019.

"There's been an evolution in our culture," Meyers said. "There's this whole transition in how people view their entertainment. It's a realization a tipping point."

One industry leader, the 146-year-old Ringling Bros. and Barnum & Bailey Circus, went out of business in May 2017. Another, Cole Brothers, has ceased touring, according to media reports.

The Kelly Miller Circus halted use of wild animals in 2018 and this year went "animal-free," according to People for the Ethical Treatment of Animals, which has mobilized opposition to circus acts for years.

Melody Ramirez, ringmaster for the Zerbini Family Circus, told the Rockland, Maine, City Council this summer that her family-owned business uses only dogs, ponies and miniature donkeys in its performances. The council nonetheless denied the circus a permit for two July shows after officials received questions about animal welfare, according to a report on WGME-TV, Channel 13. The shows were moved to a nearby town.

Meyers disputed claims offered in years past by circus proponents that traveling acts enabled young people without access to zoos to observe wild animals up close.

"It's still in a cage that hinders its natural needs," she said. "It's not an adequate life for this species."

Bishop, president of the Dalton Lions, issued an appeal for people to support one of the club's new fundraisers, a concert by the band Union Jack to be held Feb. 1 at the Stationery Factory.