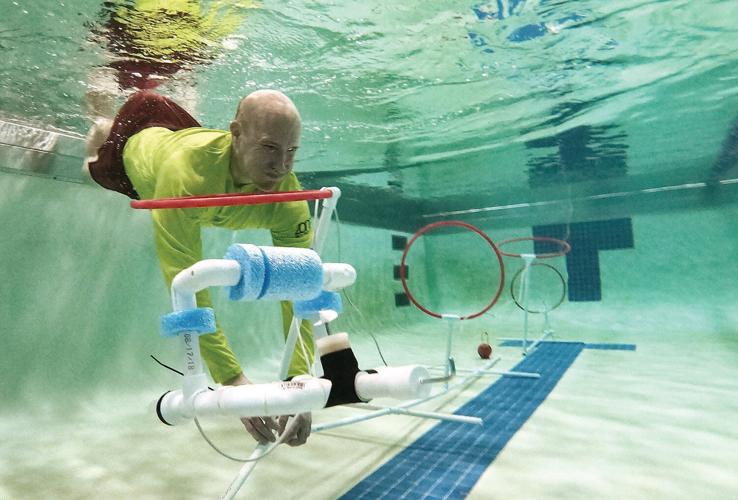 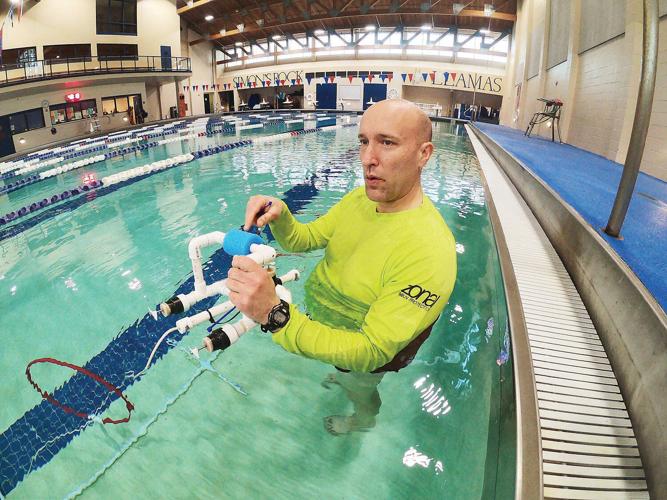 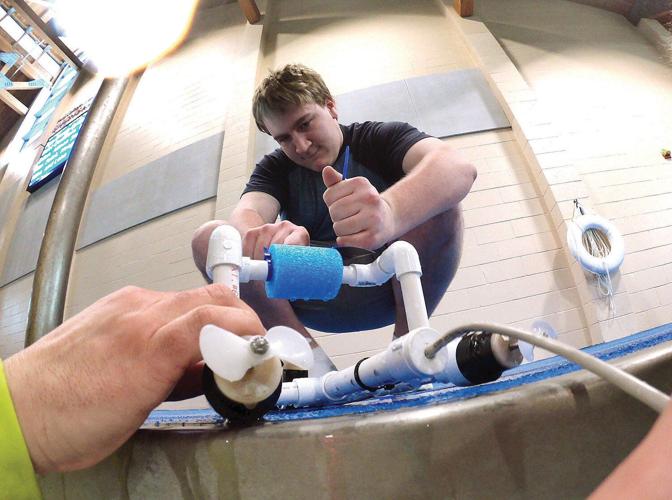 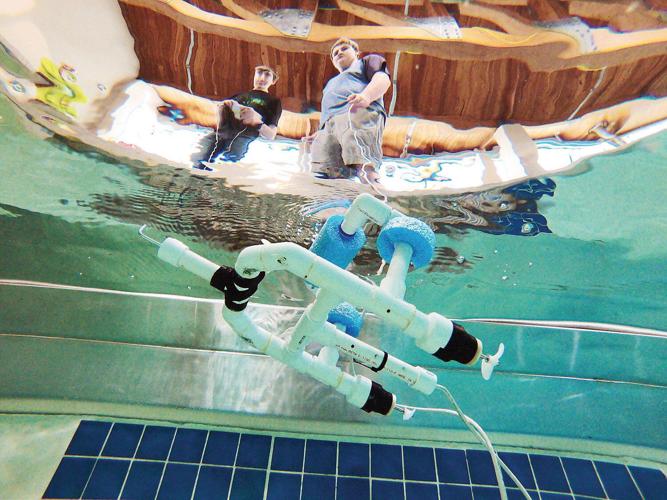 GREAT BARRINGTON — In the shallow end of the pool, Ping Marshall set up the five-hoop underwater obstacle course in the Kilpatrick Athletic Center at Bard College at Simon's Rock.

Poolside, Marshall's senior classmates, Shoji Rinaldi, Connor Blodgett and Nick LeGeyt, hooked up a 50-foot tether with electrical wires to a 12-volt battery. The other end was attached to a simple-looking robot made of PVC pipe, also used to construct the obstacle course.

The robot was powered by three motorized propellers. For buoyancy, one or more small pieces of blue foam, similar to a child's swimming noodle, were wrapped around one section of pipe.

Rinaldi remotely navigated the robot through the hoops as LeGeyt fed the right amount of tether into the water.

"If there's too much slack, [the tether] can get wrapped around the robot," LeGeyt said. "Too tight and it won't correct itself."

To the team's delight, the robot made its way through the hoops, up and back — it hadn't performed well in a 150 gallon test tank at the school.

"At this point, we're happy to see it move in the water," Blodgett.

Under the guidance of technology teacher Chris Thompson, the team will continue to practice and fine tune the robot before heading to Central Connecticut State University in New Britain, Conn. on March 22. The one-day competition is a regional qualifier to the National SeaPerch Challenge in June at the University of Maryland.

In addition to timed runs through the obstacle course, there was a Rescue and Recovery Mission inspired by the subterranean rescue of 12 students from a flooded cave in Thailand last summer.

Mount Everett has been highly successful in land-based robotics competitions in recent years, the crowning achievement was reaching the First Tech Challenge World Championships in St. Louis four years ago. Thompson and the seniors felt this year it was time to advance their skills in a different and challenging way.

"I can say we didn't dive completely into this in our first year as there's a curriculum associated with SeaPerch, such as hydrodynamics, that we need to incorporate," he said. "This year was about learning the basics."

Unlike the Lego-based or First Tech robotic competitions that use sophisticated, computer-programmed robots, the aquatics machine relies on mechanics, electronics and understanding the properties of maneuvering under water. The playing field is four-dimensional as the robot has to move forward, backward, up and down. It's crucial the robot driver's eyes adjust to seeing the submersible in action.

"It's about movement and visibility; dealing with the depth perception of watching the robot under water," Rinaldi said.

Having conquered land and hopefully sea, Mount Everett will take to the air next school year as Thompson is forming a drone competition team.