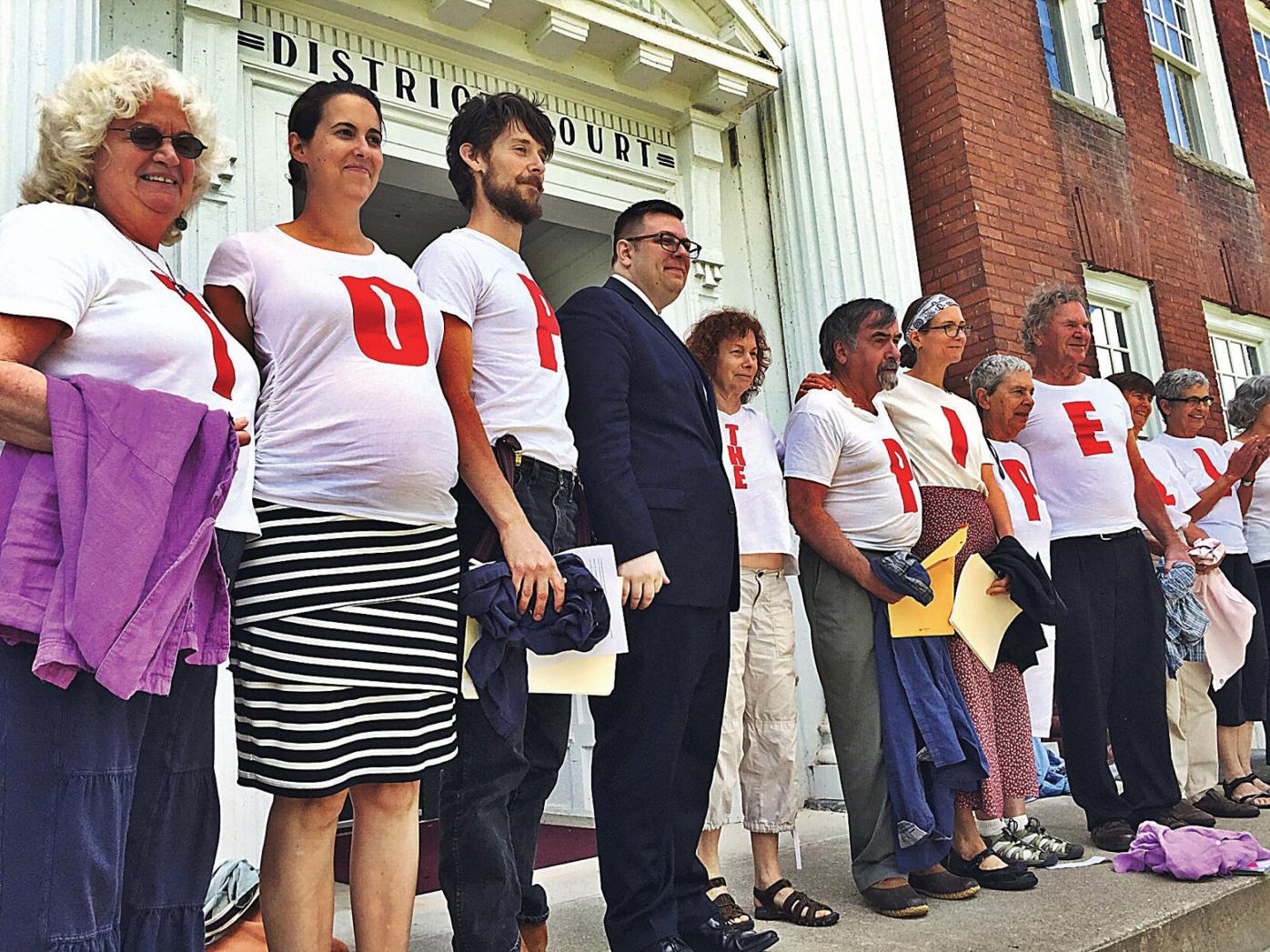 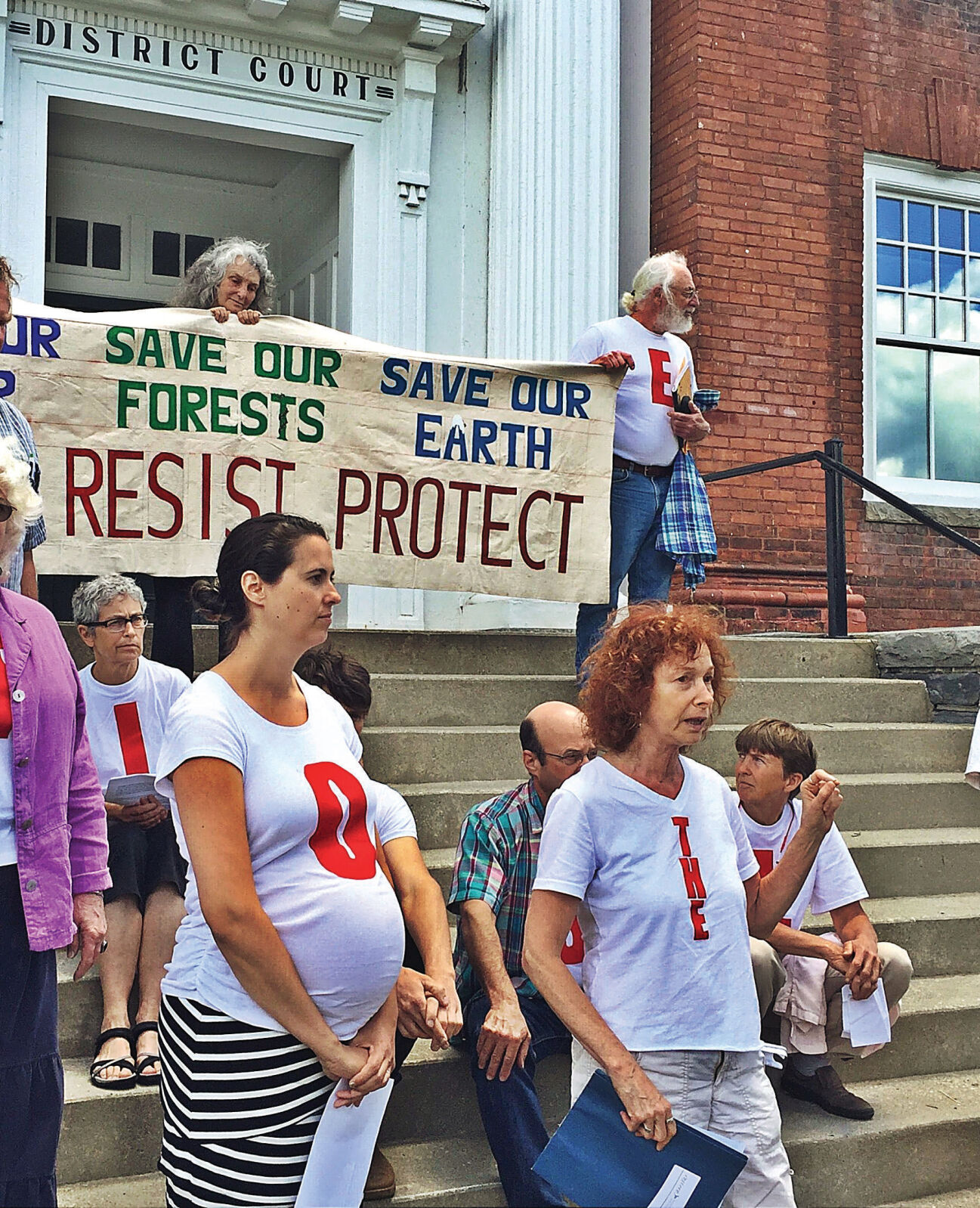 While Tennessee Gas Co. blasts rock and finishes digging its pipeline trench in Otis State Forest, anti-pipeline activists — back in court — said they will begin "summer days of resistance" Saturday with another protest.

The Sugar Shack Alliance members had come for their hearing on civil trespassing charges stemming from 24 arrests there last month.

But Judge Paul Vrabel found himself listening to a larger debate about the legality of Tennessee Gas Co.'s easement on state-owned and protected land.

He heard questions about whether a Superior Court judge and the state Attorney General's Office were right to allow the pipeline easement. And he listened to defendants who say they trespassed out of dire necessity to protect the earth and its inhabitants.

"You understand, sir, that many of these issues are beyond my purview here," Vrabel said to John Cohen, a Sugar Shack member arrested for blocking an access road, after Cohen offered a passionate speech.

Eventually, the hearing moved away from "the atrocities of a fracked gas pipeline," as defendant Ronald Coler, an Ashfield selectman, put it. Next came a long dissection of the trespassing statute, focusing on what its language of "improved" and "enclosed" land means in this case.

The activists were arrested in peaceful incidents May 2 and May 6 when they blocked access roads at the start of tree cutting, and on one occasion got too close to tree-felling machines working on Tennessee Gas' Connecticut Expansion Project, a 13-mile natural gas storage loop that will also run through two miles of state forest protected by Article 97 of the state Constitution.

The company won the easement last year after a battle in court with Attorney General Maura Healey's office for land that typically can't be removed from protection without a two-thirds vote from the state Legislature.

The state had posted "no trespassing" signs at the head of construction area access roads, but some areas near private land were not posted clearly.

Sugar Shack attorney Joseph Zlatnik contended Tuesday that Otis State Forest is "wild" public land, and that these access roads are temporary work easements, as opposed to the permanent easement for the pipeline.

"What the DCR did in this case is illegal," Zlatnik said, citing Article 97. "The pipeline project in its entirety is illegal."

Zlatnik pulled out a copy of a letter written to the Federal Energy Regulatory Commission by U.S. Sens. Elizabeth Warren and Edward Markey, who represent Massachusetts. In it they said the pipeline project should not go forward until FERC holds a re-hearing on its initial approval of the project, since new information about gas demand had come to light since the project was approved.

The judge said it was a political letter. Zlatnik said no, it had a bearing on whether DCR had the right to post those signs.

Zlatnik said the court order allowed public access to the state forest as long as it didn't affect the company's project.

"DCR telling [the activists] you can't be here comes from nothing," Zlatnik said.

But the activists say they are holding to an even tighter standard, anyway. Coler said he didn't feel he was trespassing, since this is highly protected public land.

And Cohen said he had no choice but to go onto that land, since countless nests had been wiped out by tree fellers during nesting season.

"I had to defend all of these species that are victims of human misbehavior," he added.

But Vrabel said he had to look at the law and the law alone.

Vrabel, Zlatnik and Assistant District Attorney Caitlin Shugrue went through rounds on whether this area of Otis State Forest is enclosed or improved land, as the trespassing statute specifically says.

"It's an issue," Vrabel said, wondering if an access road could be considered an "improvement."

"The state hasn't proved that this is improved land," Zlatnik said.

Shugrue said the land was in the process of being improved, and that the interpretation is "subjective."

Zlatnik swung back to his core argument that there has to be a "rational" reason for the state to allow this use of its Article 97 land.

"And what is my role?" the judge asked, noting that in civil trespassing cases, which typically result in $100 fines, he is using the same standards he would for a traffic ticket.

The state last month reduced the charges from criminal to civil.

But it was the parsing of the law without result that prompted Vrabel to continue the hearing to June 27, asking Shugrue and Zlatnik to bring him briefs on how to define enclosed or improved land in this case.

Afterwards, Sugar Shack members stood on the courthouse steps and said their summer days of resistance would start with a funeral procession "to bury the fossil fuel age" on Saturday at 10 a.m. at Lower Spectacle Pond.

Sugar Shack spokeswoman Vivienne Simon, one of the defendants, told a cheering crowd that she believes the pipeline can still be stopped.

"This fight isn't over," she said.