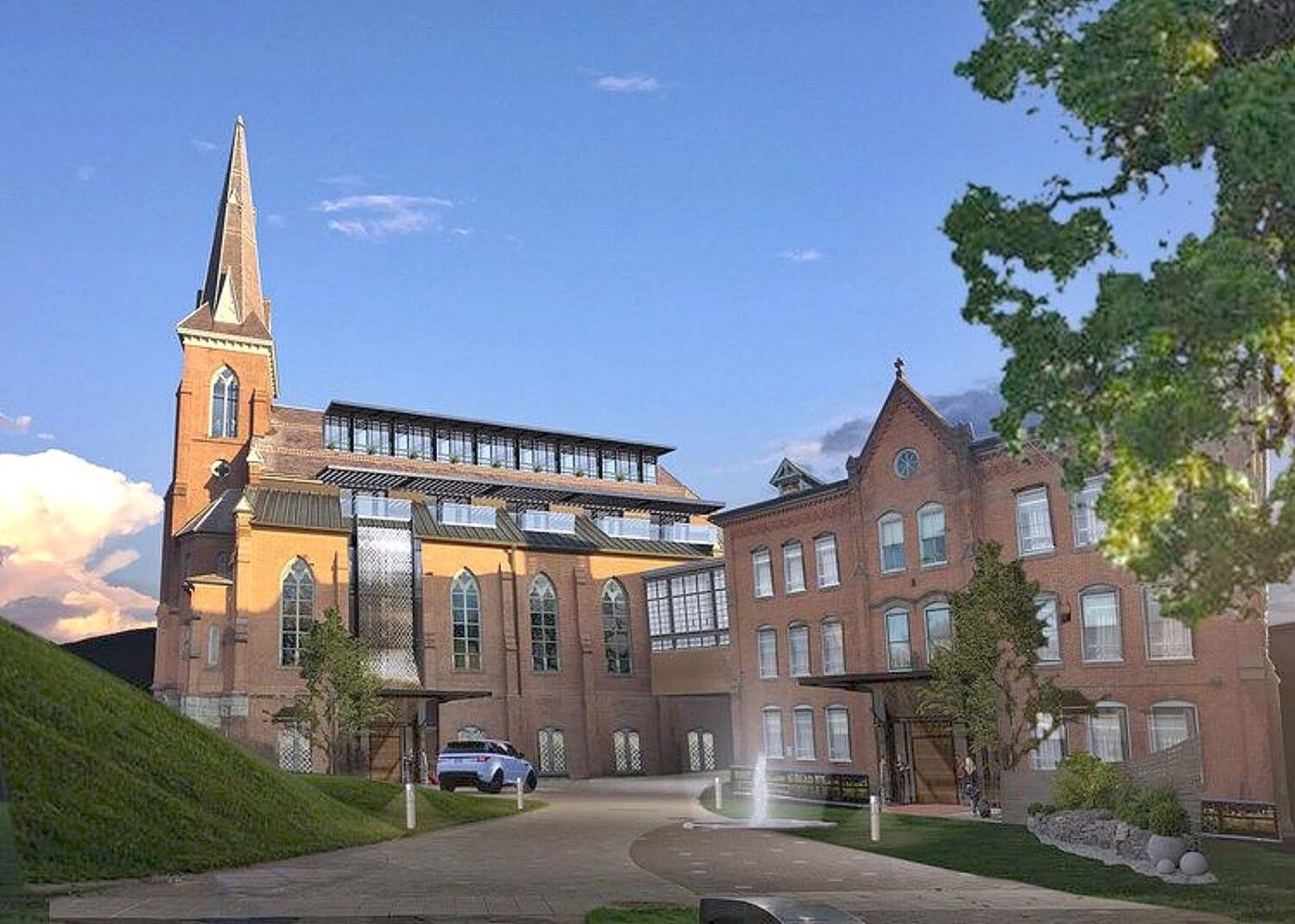 An initial, conceptual rendering of the proposed Notre Hotel created by The Square Office. The $18.5 million hotel proposal was the winning bid on the city-owned former Notre Dame du Sacre Coeur Church property. 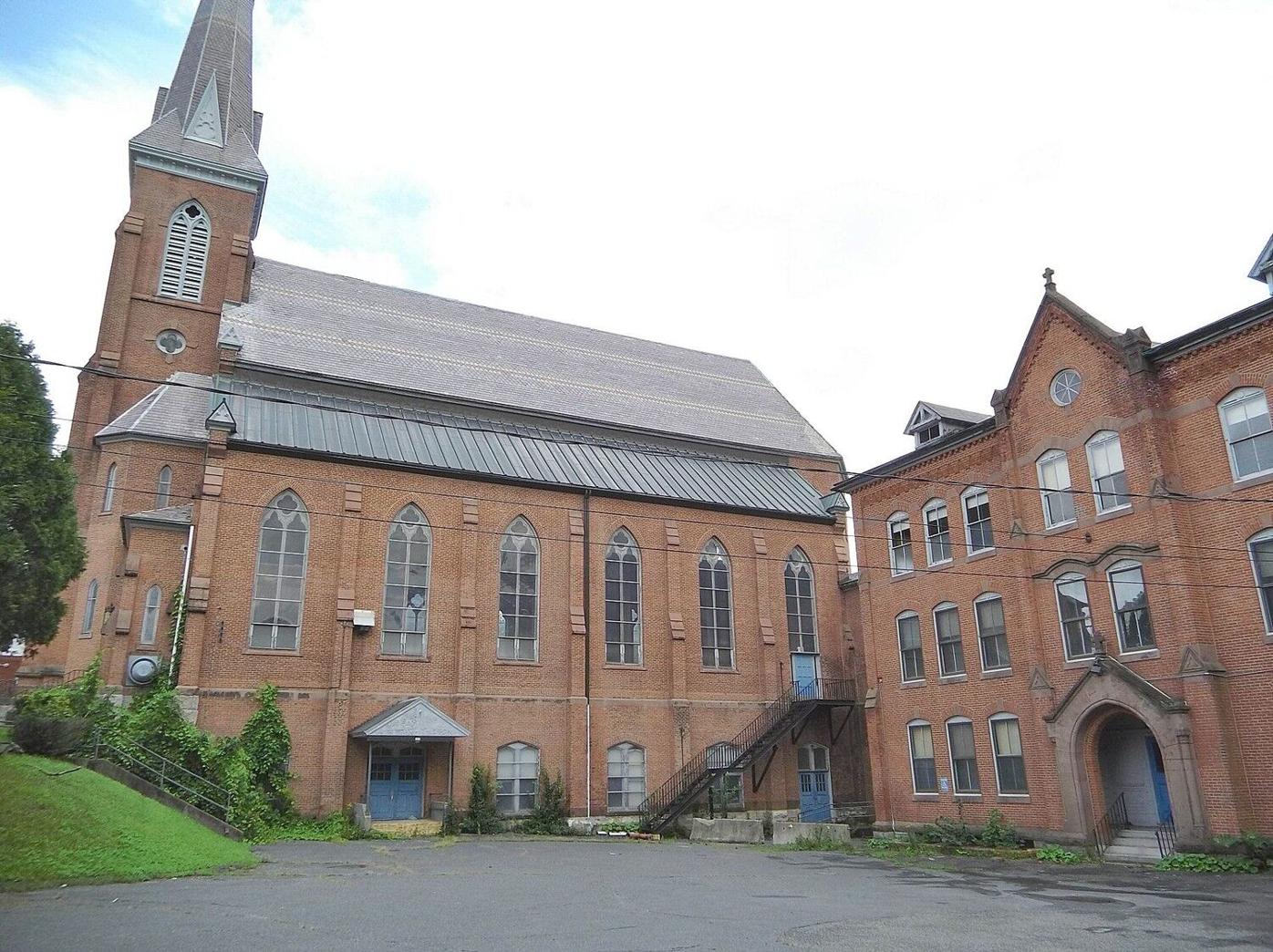 The Square Office has submitted a bid on the city-owned former Notre Dame du Sacre Coeur Church and school building on East Main Street that would transform the historic property into a 64-room hotel. 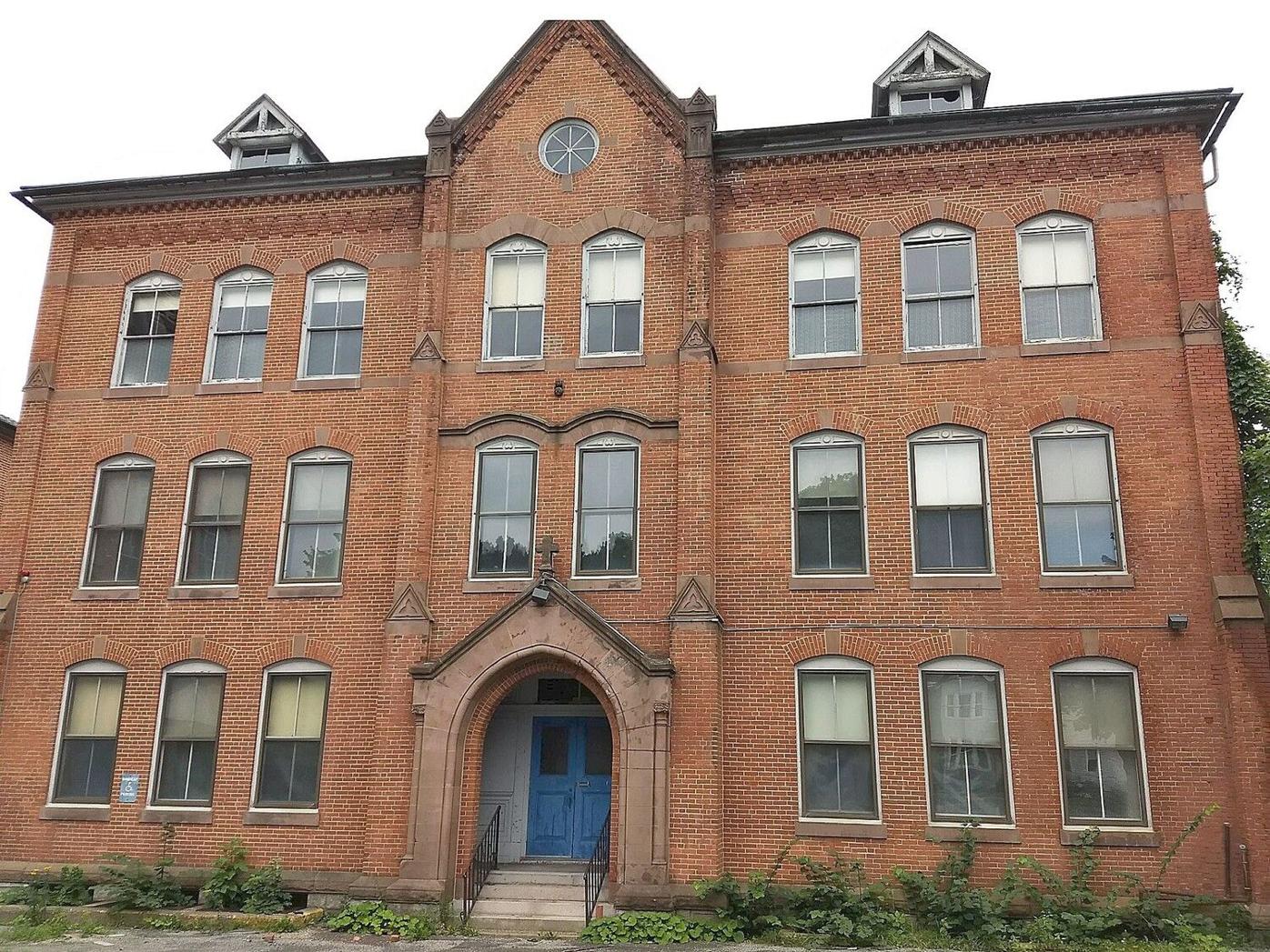 The former Notre Dame school building on East Main Street is part of a 64-room hotel proposal from developer The Square Office.

An initial, conceptual rendering of the proposed Notre Hotel created by The Square Office. The $18.5 million hotel proposal was the winning bid on the city-owned former Notre Dame du Sacre Coeur Church property.

The Square Office has submitted a bid on the city-owned former Notre Dame du Sacre Coeur Church and school building on East Main Street that would transform the historic property into a 64-room hotel.

The former Notre Dame school building on East Main Street is part of a 64-room hotel proposal from developer The Square Office.

NORTH ADAMS — The city has received a bid for an $18.5 million hotel project in the former Notre Dame du Sacre Coeur Church and adjacent school building on East Main Street.

The Square Office submitted an offer of $253,000, accompanied by a set of plans for a 64-room hotel with amenities, in response to a request for proposals on the city-owned historic church.

It's one of two properties the city plans the sell, the other being the former salt shed on Ashland Street that was awarded to tiny-houses builder B&B Micro Manufacturing.

Mayor Thomas Bernard and city officials are recommending that the city accept the church bid — it requires approval from the City Council — over two others from local artist and developer Eric Rudd and local developer David Moresi.

"I don't know that it was exactly what anyone had in mind, but it's an interesting development," Bernard said of the plan.

The Square Office is operated by Emily Daunis and Daniel Wallis, who returned to North Adams in 2017, after living in New York for eight years. The company describes itself on its website as "providing design and development services for clients around the corner or across the country."

The plans for a Notre Hotel are outlined on the company's website and describe 60 "luxury" rooms and four penthouse suites. Other amenities would include a bakery, yoga studios, restaurant and more.

"We're excited to help the area grow," Daunis said. "There is so much potential. It was great coming back to the region and seeing that things really have improved. We can see the difference, and it's an exciting time to be in the Northern Berkshires."

Although the proposal is the first of such a scale for the company, Daunis and Wallis are confident in its viability and its ability to attract investment.

"We've met our first-round [fundraising] goals, and I'm fairly confident that we can keep that momentum moving forward," said Daunis, who has spent the past decade professionally fundraising in the nonprofit sector. "I've been in fundraising for the past 10 years, and it's a short jump over to real estate development fundraising."

The city issued a request for proposals on several properties in July, including the former Sullivan School, the Notre Dame church and adjacent school building, the salt shed on Ashland Street and a plot of land in Pownal, Vt.

The Notre Dame property is assessed at a combined $1.2 million between the school building — it was erected in about 1897 — and the church building, erected around 1889, according to assessor records. The church is on the State Register of Historic Places, but the historical preservation requirements that come with the property were not a deterrent to The Square Office.

"With any building project of this scale, you're going to have things you have to work within. That just sets parameters," Wallis said.

Acceptance of any bid below the assessed value of any publicly-owned property requires City Council approval. The proposal is set to be heard by the City Council at its meeting Tuesday.

Moresi had offered $1 to create 12 units of housing on the property, while Rudd had bid $25,000, with an eye on expanding the work of his Berkshire Art Museum in the church and, eventually, adding housing in the school building.

"The Notre Dame decision was the toughest one for the group to come to. We talked it over and we tabled it, and we came back on it because we really were thinking about best use, what would be a good fit in that part of the city," Bernard said.

'Energy' in the air

The city purchased the Notre Dame property in 2008 from the Roman Catholic Diocese of Springfield for $500,000, with development plans in mind that never came to fruition.

The church was put out to bid just last year, but received zero proposals.

"There is that energy," Bernard said. "We're hearing different proposals for hotels in downtown, and I like that idea as people come into the city, being able to capture more bed nights in North Adams."

Daunis noted the recent expansions of the Clark Art Institute — that's where she now works — and the Massachusetts Museum of Contemporary Art. She believes the area is underdeveloped when it comes to lodging.

"It's really time that the area starts being able to support the Northern Berkshire region more as far as having more overnight stays," Daunis said.

Daunis and Wallis, who are married, previously operated Papyri Books in downtown North Adams before moving to New York.

The second and only other property the city plans to move forward in selling is the former salt shed, which is no longer necessary, as the Department of Public Services has moved into a new, larger headquarters, on Hodges Cross Road.

"None of them were at the assessed value; however, this is a case where, based on an intended use, I have one we believe is worth bringing forward," Bernard said.

The salt shed received a bid last year from Berkshire County Construction, a neighbor of the property on Ashland Street, at $50,000. But the City Council turned down the offer, citing concerns about salt storage and the amount it was below the appraised value.

It received a single proposal in a round of bidding under former Mayor Richard Alcombright last year. The bid was for less than the assessed value and was tossed out by the administration.

"How you would make it accessible at every level; it would incredibly challenging. It's a great location with an incredible view, but the costs of redeveloping it are probably prohibitive," Bernard said.

The property in Pownal received one bid that was below the assessed value and was rejected by the city. The property brings in a small amount of revenue through "minimal, sustainable logging" to offset the cost of taxes, according to Bernard.

"It's not something that is a drain on the city coffers, so we didn't feel compelled to accept that proposal," Bernard said.

If approved by the City Council, the city plans to execute purchase and sale agreements with winning bidders in September.

Adam Shanks can be reached at ashanks@berkshireeagle.com, at @EagleAdamShanks on Twitter or 413-629-4517.