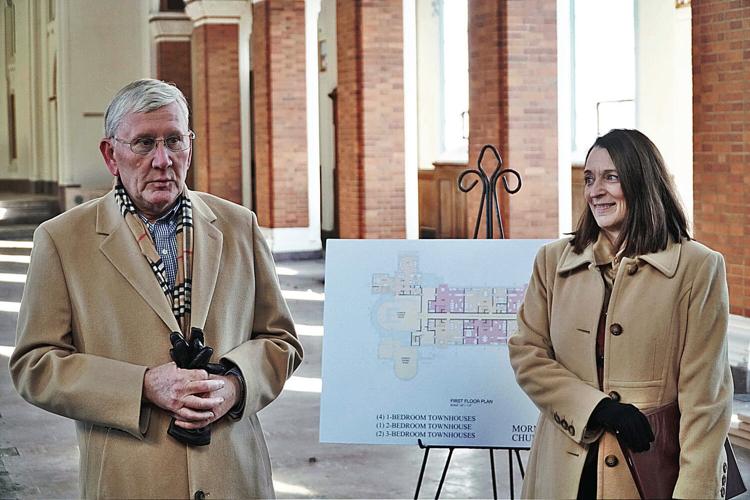 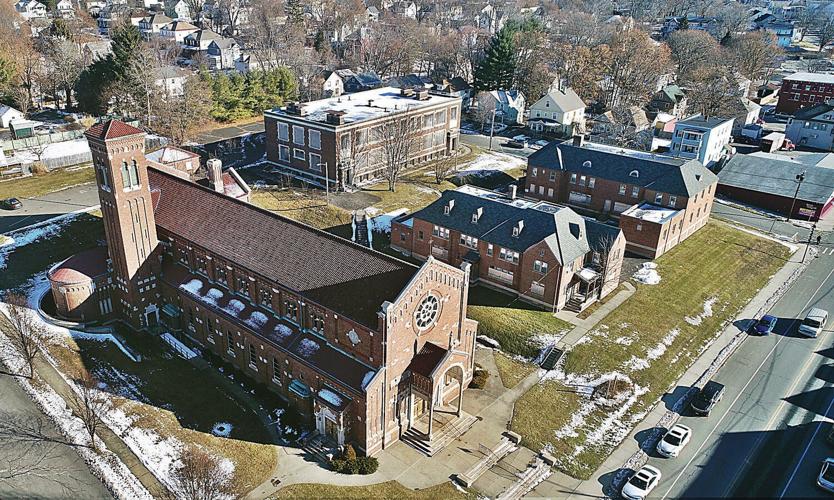 The former St. Mary the Morning Star Church on Tyler Street in Pittsfield will be redeveloped into a 29-unit apartment complex under a proposal unveiled Thursday by developer David Carver and Mayor Linda Tyer.

The former St. Mary the Morning Star Church on Tyler Street in Pittsfield will be redeveloped into a 29-unit apartment complex under a proposal unveiled Thursday by developer David Carver and Mayor Linda Tyer.

PITTSFIELD — A prominent local developer is working with the city to turn the former St. Mary the Morning Star Church on Tyler Street into an apartment complex.

David Carver, joined by Mayor Linda Tyer, announced the project Thursday during a press conference at the former church. His company, CT Management Group, plans to build 29 market-rate apartments at the four-building site with financial support from MassDevelopment and City Hall.

He said he has a purchase and sale agreement with the Roman Catholic Diocese of Springfield in the amount of $500,000; the diocese on Thursday confirmed the sale had been finalized.

Tyer said she will put forward a tax-increment financing proposal, which will likely exempt the property from taxes for the first five years. She said such tax incentives are an important part of the package for this type of costly redevelopment, which will include a fitness center on campus and "high-quality housing at affordable prices."

"I am absolutely thrilled to know that one of our city's most cherished and beautiful landmarks will have a new lease on life through its conversion to market-rate housing," Tyer said in prepared remarks. "The city recognizes the significance of this investment and wanted to support the advancement of this major development through our available resources."

The 2.6-acre includes the former rectory, convent buildings and a school, all of which will be converted into housing. The former church property has been for sale since it was closed by the diocese in 2008.

This will be the fourth church in Berkshire County that Carver has turned into housing. His company's plan to turn the Holy Family Church on Seymour Street into Powerhouse Lofts is nearing completion, designers said after the conference.

"I hope this inspires other developers to invest in Morningside," Tyer said.

Carver's firm also redeveloped St. Raphael's Catholic Church in Williamstown into the eight-unit Church Corners Apartments. And in 2013, he converted the former Notre Dame school building in Pittsfield into an 11-unit apartment building.

City firm Bradley Architects will design the space. Carver said MassDevelopment provided a partial acquisition loan for the project. He said he will continue to pursue other funding avenues to close the gap between project costs and what the market will bear.

St. Mary's is the last city church building to be sold in the wake of the consolidation by the diocese, which also saw the closing of four other parishes, according to diocese spokesman Mark Dupont.

He said conversations are underway with a buyer interested in the former St. Francis of Assisi property in North Adams, demolished for safety reasons earlier this year, and the former St. Joseph's Central High School in Pittsfield, which closed in the spring and should go to market "in the near future."

Carver said Thursday he and his team changed their minds because the 61 parking spaces wouldn't be enough for the venue they envisioned, the demand for housing was higher, it seemed to be a better financial plan and the best way to use the four buildings as a unit.

He said he was able to confirm the church is structurally sound, but it will take considerable planning and work to repurpose it. The four buildings were built between 1912 and 1954 and have stood vacant for nine years.
"It's about time we got to it because they do start to deteriorate," he said, looking up at the high ceilings.
He said he enjoys buying and redeveloping churches because of the architecture and history they bring to the table. They are not lucrative projects, he said, but they're intriguing.
"It's a creative challenge," he said.
It usually makes the most sense to repurpose a church into housing, he said, because "they tend to be in residential areas and they make charming housing." Plus, he said, "there's a demand for it."
A communications liaison for a group that fought to save the St. Mary's campus from demolition — at one point, a Dunkin' Donuts was proposed there — said she's happy to see a local developer step forward who will maintain the site's structural integrity.
"We have a great buyer now who's done a lot of preservation," said Darcie Sosa of the Friend's of St. Mary's. "I think it's going to be sustainable — people always need a great place to live."
Amanda Drane can be reached at adrane@berkshrieeagle.com, @amandadrane on Twitter or at 413-496-6296.