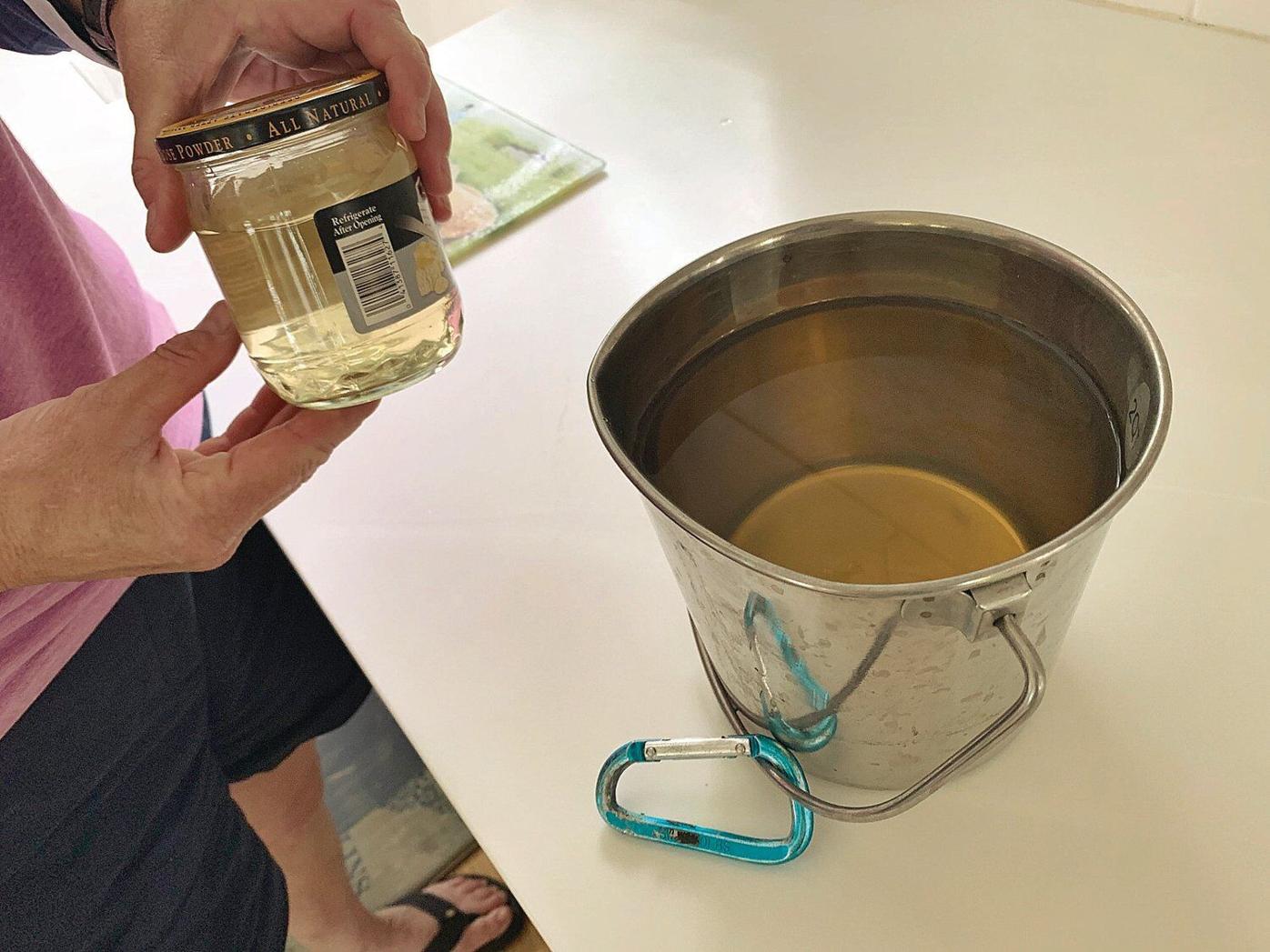 Christine Koval, of North Plain Road, holds a jar with the second draw of water from her faucet Tuesday morning, after the first draw, which went into the dog's water pail. After running her water for a while, it began to run clear. This is the norm at her house, she said of her struggles with water delivered by Housatonic Water Works Co. 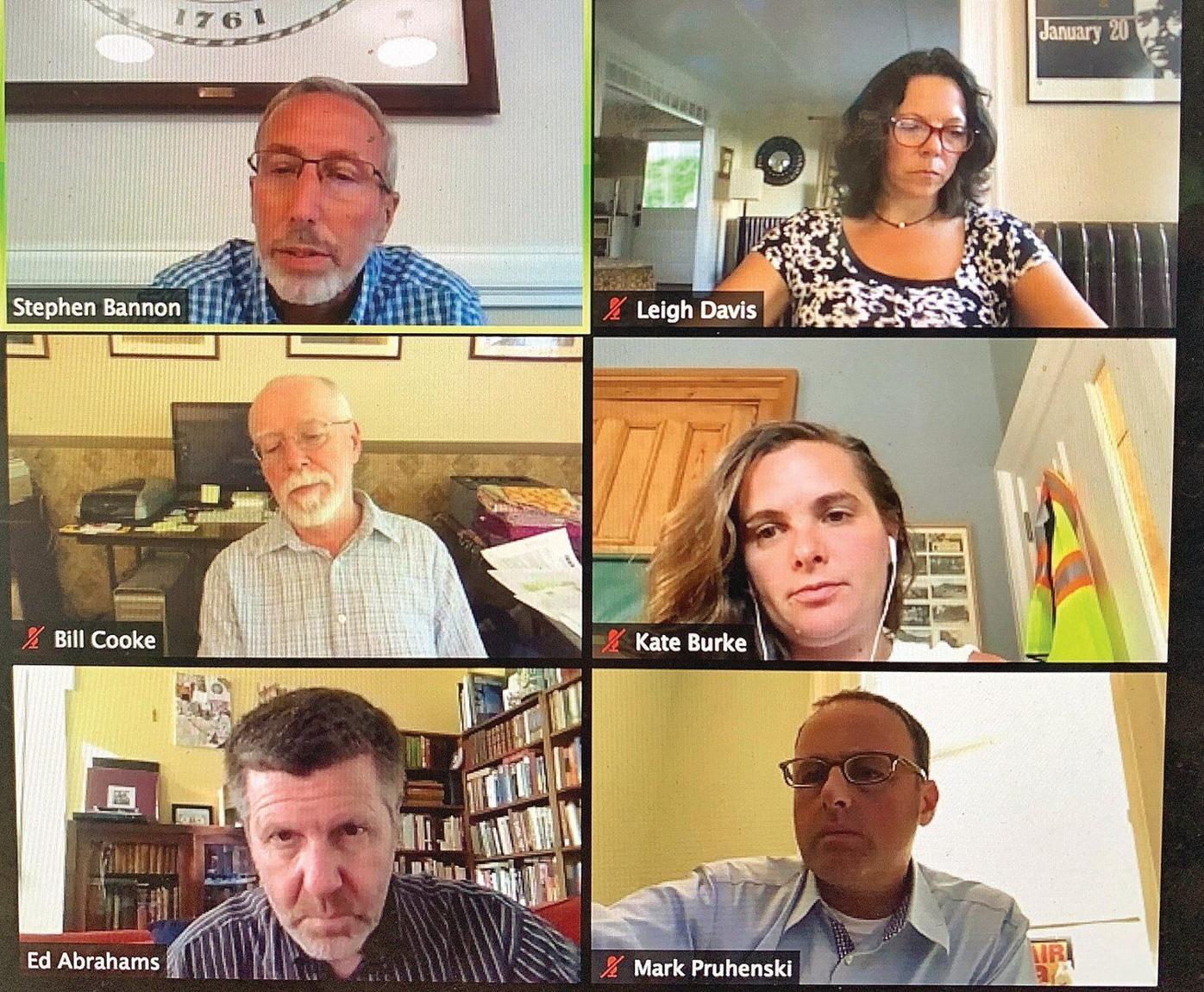 Members of the Great Barrington Select Board listen to Housatonic residents frustrated with ongoing dirty water problems from water delivered by the private Housatonic Water Works Co. The board approved a plan to study whether the town should take over the company.

Christine Koval, of North Plain Road, holds a jar with the second draw of water from her faucet Tuesday morning, after the first draw, which went into the dog's water pail. After running her water for a while, it began to run clear. This is the norm at her house, she said of her struggles with water delivered by Housatonic Water Works Co.

Members of the Great Barrington Select Board listen to Housatonic residents frustrated with ongoing dirty water problems from water delivered by the private Housatonic Water Works Co. The board approved a plan to study whether the town should take over the company.

GREAT BARRINGTON — With Housatonic residents fed up and frightened by a new bout of rusty water, town officials have approved a plan to study solutions to the problem, including a possible takeover of the private water company that serves 840 customers in the village and surrounds.

The Select Board voted unanimously during Monday's remote meeting to approve $50,000 for a consultant to look at ownership scenarios that would make it possible to replace Housatonic Water Works Co.'s old, cast-iron water mains.

Board members vowed to tackle the problem with new fervor, and said the issue would remain on the agenda for every meeting until a solution is hatched.

For years, customers of the company have been dealing with recurring periods of discolored water. Turbulence from routine flushing of the pipes, as well as hot weather, stir rusty sediment in mains that date to the 1860s, resulting in tap water delivered in shades ranging from yellow to brown.

The problem reached a boil in 2018, and residents flocked to meetings with jugs of dirty water to complain.

But, the problem is so complex and expensive to fix that nearly two years have passed without a path forward, according to town officials and the water company's treasurer and co-owner, James Mercer.

Mercer said that he is negotiating with the state Department of Environmental Protection to add a chemical — polyphosphate — to the water supply, which will separate the rust from the water so the water will run clear.

But, customers say they have lost trust and faith. They told the board that they are tired of studies that go nowhere and empty promises, and are ready to stop paying their bills. They say the time is up.

"I think we've been more than patient," said Suzanne Fowle, of Kirk Street, noting that water in shades from yellow to brown has plagued her household since she moved there in 2003.

Elizabeth Rockefeller said it has been a problem for the 47 years she has lived here.

The study would be the second to look at a water company that can't afford to replace all its mains without what Mercer says would cause rate shock to customers that the Department of Public Utilities would not approve. The first study, published in 2018, gave an overview of the water system and said merging its 19 miles of mains with Great Barrington's was feasible, and could save taxpayers money in the long run.

The federal Environmental Protection Agency and the DEP, which has oversight, say the low level of iron is not harmful to drink. But, residents do not trust it and often rely on bottled water, or buy expensive filtration systems.

"Distributed water is free of bacteria, and most recent samples for lead and copper and disinfection byproducts meet standards," she wrote.

The agency monitors water quality tests that include lead, copper and contaminants like fluoride, nitrates and chlorine. Elevated lead levels were found in 2016, which Mercer attributed to old household plumbing. In 2018, the company was cited by the DEP for spikes in chlorine levels.

The state requires the company to send test results to customers annually and post them on its website.

Tests are performed at 20 locations; most are homes, and homeowners will take the samples to be analyzed by Lee-based Housatonic Basin Sampling and Testing, Mercer said.

Dr. Ruby Chang, a board of health member, asked the board for the data.

Residents and business owners also note that their white laundry never will be the same.

Terry Coughlin, who, with his wife, opened the Granville House inn off Division Street on July 1, said they have lost around $1,000 in brand-new white linens, and have had to purchase a $3,000 water filter system.

"It's an incredible juggling act as we try to appease guests," Coughlin said. "It sometimes feels like we have one hand tied behind our back."

Mercer said he, too, is frustrated by the struggles of his customers. He did not participate in Monday's meeting.

While Fowle's water finally was running clear on Kirk Street on Tuesday morning, at Christine Koval's house on North Plain Road, it was a different story.

She held a jar of yellow water — the second draw of the morning. The first draw was slightly darker, in a small metal pail for her dogs. By midmorning, the water was running clear.

"I throw money down the drain," she said of the expense of running the water to clear it.

Koval's struggle has been fairly constant since she moved here 2 1/2 years ago. She said the water problem surprised her — it wasn't disclosed by real estate agents when she bought the house.

It also ruins her expensive hair color, and it stains her toilets.

And there are even bigger problems, said Marc Palumbo, a resident and former town firefighter. He told the board that the 500-gallon-per-minute water pressure in the hydrants is too low to effectively fight fires. It's something that has worried firefighters here for decades, and was noted in a 2018 study for the Great Barrington Fire Department.

"Without scaring people, the numbers get worse," he said. "On certain side streets, we're talking 200 gallons per minute."

Mercer says the company does not test the hydrant pressure.

"They are exercised and the seals are checked," he said. Pressure checks, he added, would stir the rust.

Mercer said his company's problems are complicated and expensive to fix, and that the town has the right to step in and take over the company, as long as it is purchased for "fair market value." He said he doesn't know the price — only an appraisal will tell.

Board members said they are ready to take action. Leigh Davis suggested helping residents in the interim by getting them water filters. And Bill Cooke wants to restructure the utility.

"The sooner the town can take over that Water Department, the better off we'll be," he said.