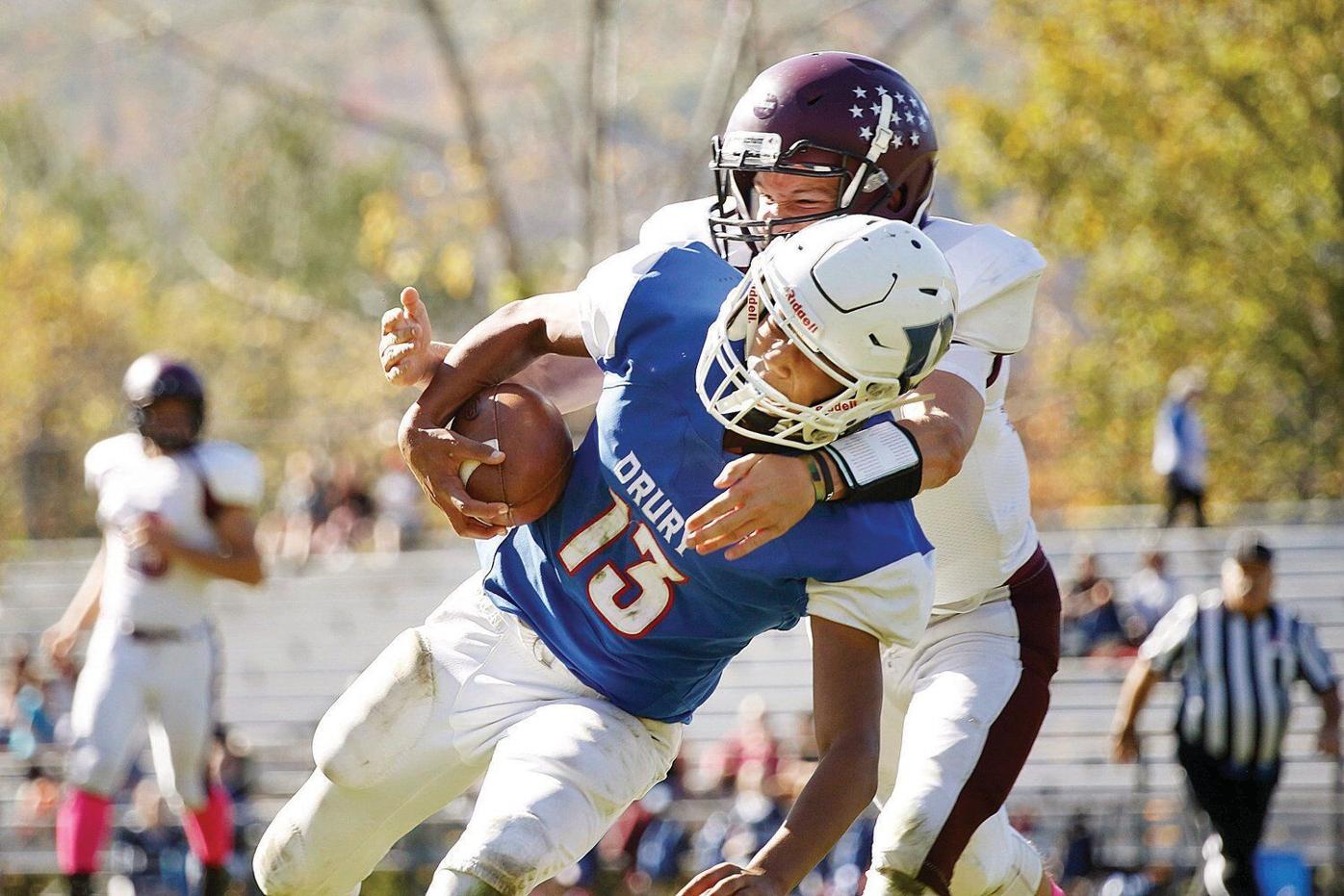 Drury's Dante Woodson looks to be a leader of the Drury and Mount Greylock co-op football team. 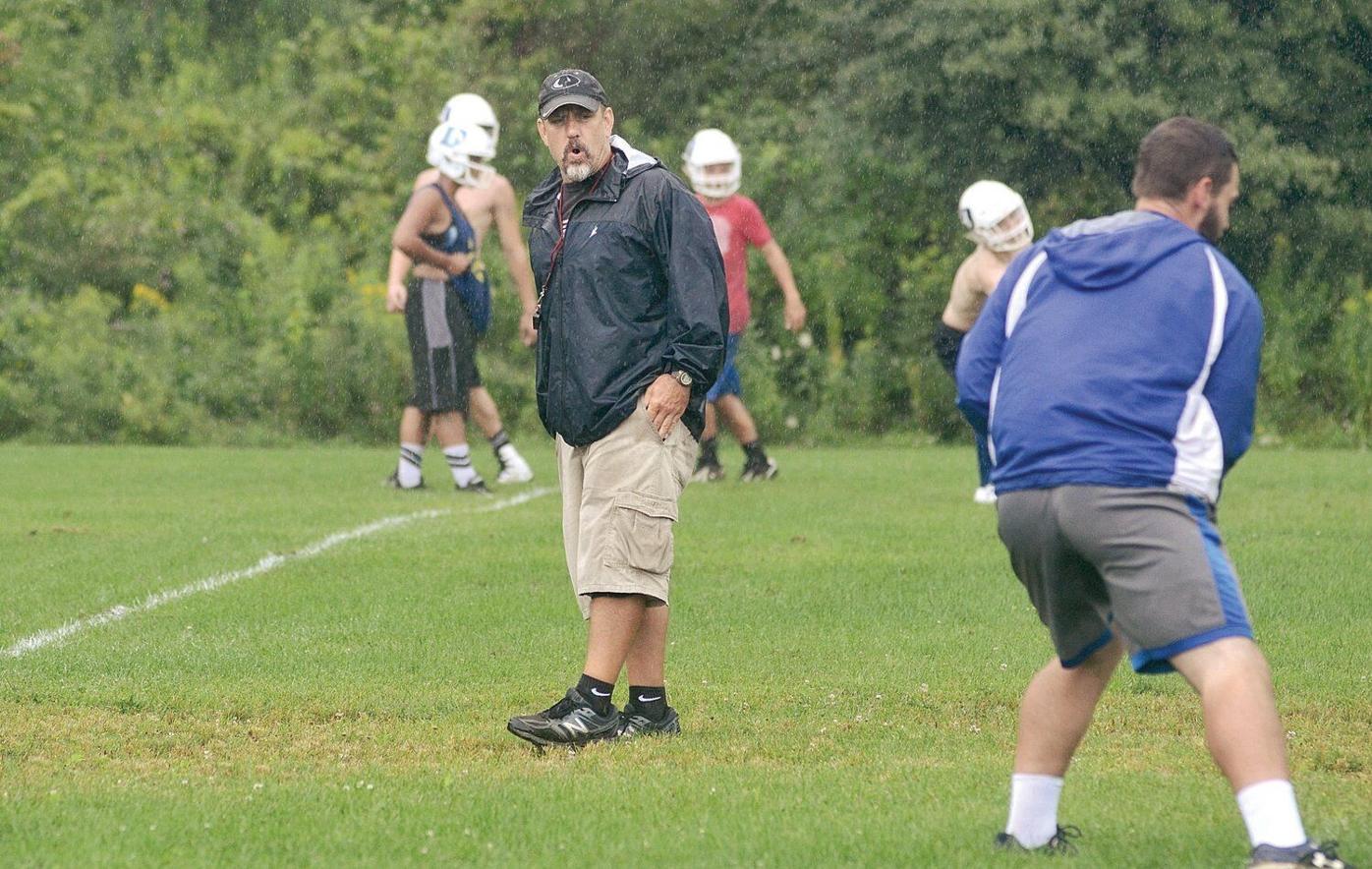 Drury coach Al Marceau has a handful of new faces to work with as the season gears up for the Drury and Mount Greylock co-op football team.

Drury's Dante Woodson looks to be a leader of the Drury and Mount Greylock co-op football team.

Drury coach Al Marceau has a handful of new faces to work with as the season gears up for the Drury and Mount Greylock co-op football team.

Mount Greylock and Drury will play in the same uniform in 2019 after it was announced that the kids from Williamstown will suit up as Blue Devils earlier this summer.

After both teams struggled with depth in 2018, Drury coach Al Marceau could not be happier to have a larger squad this season.

"We were so short-handed the last couple years and had only 17 eligible players for the first game in my first year," Marceau explained. "Fortunately, if we can get all the Mount Greylock players over we should be two-deep at every position."

There are currently just a handful of Mount Greylock students scheduled to suit up as Blue Devils, but that number has started to climb since the season began last week.

"There is no doubt this is tough on the Greylock kids," Marceau explained. "Especially for the seniors who played four years at Greylock. It is almost like pulling out the rug from underneath them. You understand why they did the co-op, but for a 17-year-old, it is a big let down in their senior year."

Not only is switching teams a tough pill to swallow, but another issue is the fact that the schools are roughly 35 minutes away from each other.

For the Mount Greylock kids who have already started to show up, Marceau is hopeful that they will stay in touch with the kids that are up in the air about joining Drury.

"The Drury and Mount Greylock kids have gotten along great," Marceau said. "Now they're getting to know each other better and the Greylock kids are working on classmates. I just coach football players.. it doesn't matter where they come from. It didn't change anything other than adding some numbers and picking up some talent, which I am pretty excited about."

"I think the real test is when two kids from different schools think they deserve a starting job at the same position," Marceau added. "How will the person who doesn't get the job handle it? That is an important life lesson, we've all been passed over for jobs."

Ryan and Brendon Goss are two of the Mount Greylock kids who will come in and instantly compete, along with Keegan Vidal, who transferred to Drury from McCann Tech.

Not only does the new-found depth build competition, but it gives Marceau an opportunity to give players a chance to get a breather at times so they can play at a high level.

"Tim Brazeau, who has started since he is a freshmen, is a horse defensive end who made third team All-Berkshire at defensive end last season," Marceau said. "I think he played every snap for us until he got hurt late last season. I believe he can be at minimum second team All-Berkshire this year. Hes starting to mature and the sky is the limit. The fact we can give him some breaks is huge."

Speaking of competition, Vidal, along with Payton Barnes and Danny Cartmill, will each have the opportunity to earn the quarterback role and will see their first taste of live action as they are planning a scrimmage next Saturday.

While it is too early to see how the depth chart will shake out, the Blue Devils look to have plenty of young talent in their backfield along with senior Dante Woodson.

"They might not be able to carry the ball 20-25 times a game since they're so young," Marceau said. "All of them can be effective with 8-11 snaps a game, which allows us to get creative in how we use them. Defenses may pick up a certain grouping, but to use kids in different ways off of fakes because they have overlapping skill sets makes it a lot easier."

Woodson is slated to be a leader on both sides of the ball, along with Alan Marceau, who was thrown into the fire at a young age as the son of a football coach. Alan Marceau started as a freshmen and is slated to play spend time at center and linebacker.

"He knows the game so well because hes emerged in it," Al Marceau said. "I break down the film at home and he has been coming to practice for 14 years. It's nice to have him, even last year as a sophomore, teaching kids their roles. It is great to have two guys [in Alan Marceau and Woodson] out there who can keep everyone straight."

Not only does coach Marceau have the luxury of some on the field captains, but has a tight-knit group of assistant coaches.

"I am excited about this coaching staff," Al Marceau said. "They're all knowledgeable and our group is big enough to give kids individual time. We all have a great relationship and are close. I think that helps the kids because they know they can reach out to any of us."

While Marceau's title is coach, he is focused on helping his players grow as individuals.

"Don't get me wrong, nobody likes winning more than me," Al Marceau explained, " but is watching these kids grow and mature is what is important."

The loyalty to one another, especially in a co-op, will be big. That loyalty, along with toughness. is they key to our season."

The Drury and Mount Greylock co-op season begins the season under the lights at Monument Mountain on Sept. 6, with kick-off scheduled for 7 p.m.

The Drury and Mount Greylock football programs, after a year apart, will reunite and compete as a co-op in 2021.