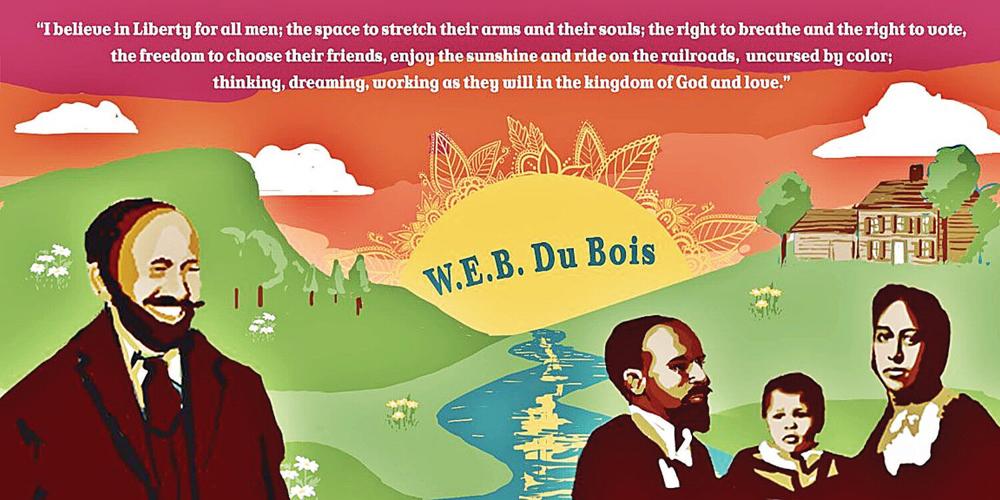 The mural designed for the Railroad Alley in Great Barrington shows the local landscape, W.E.B. Du Bois and his young family, along with quotes from the African-American scholar. 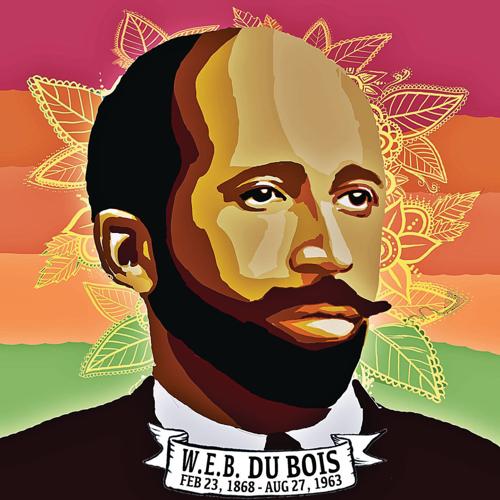 This draft of the Triplex mural in Great Barrington features a large portrait of W.E.B. Du Bois.

The mural designed for the Railroad Alley in Great Barrington shows the local landscape, W.E.B. Du Bois and his young family, along with quotes from the African-American scholar.

This draft of the Triplex mural in Great Barrington features a large portrait of W.E.B. Du Bois.

GREAT BARRINGTON — In the town where he was born, there are a few places that honor W.E.B. Du Bois.

But soon there will be murals and more as the town does more to recognize that it produced someone who loved it, and someone worth saluting.

Soon Du Bois will get two prominent alleys downtown. And one will be named for the African-American author, scholar, sociologist and civil rights leader who co-founded the NAACP.

Richard Stanley, who owns the Triplex Cinema and the adjacent commercial building, said what is now a chalkboard "Courage Wall" created by the Youth Project will be replaced by two murals.

Another mural panel will also go up in the alley around the corner, on the side of his Triplex Cinema building, he said. The fourth is planned for the alley between Main Street and the parking lot near Rubi's Cafe, in a building owned by Eric Bruun, who was the founding Youth Project board president.

The murals near Railroad Street will be unveiled in February, one event in the town's official celebration of Du Bois' 150th birthday on Feb. 23.

Du Bois was considered pivotal to the nation's political debates over race and class. But his ideas were controversial, and his radical thinking challenged mainstream thought.

At age 93, he moved to Ghana and joined the Communist Party. Though the reasons are complex, according to those who study Du Bois, the communist label has stuck, even long after his death.

Many local town officials and residents have said that partly for this reason, local recognition of his work is late-in-coming.

But a new understanding and appreciation of Du Bois is beginning to blossom.

Earlier this month the University of Massachusetts Amherst Libraries W.E.B. Du Bois Center donated framed prints of a Du Bois family photo and his birth certificate to the town. Both now have a prominent place in town hall, the first visible honors of Du Bois ever in the building.

Then a local group recently launched a web campaign for a statue of Du Bois, to go up in a prominent place in town.

Now come the murals, created in his spirit and based on research.

"Du Bois is the definition of black success," said Zufan Bazzano, one of the project's leaders and a Monument Mountain Regional High School senior. "He overcame many obstacles, defied expectations, and he came from this town. My town. I want to continue what he started."

The 20 young people working on the mural have help from accomplished artists Massimo Mongiardo and Brian Cartier.

And artist and Monument senior Sophie Shron orchestrated the group toward a finished design that required more than 10 rounds of revisions.

This isn't the first mural in town to honor Du Bois. Around 2002, a mural went up on the side wall of Carr's Hardware, next to Rubi's Cafe. It was followed by another one years later, after the paint began to chip on the first. Both came down when the wall required structural work.

Bruun told The Eagle that two young men arrested in town for graffiti vandalism were guided by the Youth Project toward painting the mural as community service.

"They decided to apply their passion to a constructive purpose," Bruun said.

"All along we knew the wall had to be fixed, and the kids said because it's street art, that was OK," said Ananda Timpane, Railroad Street Youth Project's executive director.

"That's why these new murals will be on materials that can be taken off the wall so they can have permanent homes on the buildings, and so the buildings can still be maintained," she said.

Timpane, who grew up in Great Barrington, said both Du Bois and the young muralists' unflinching dedication to what has already been a long process inspires her.

"It is their passion to make it so anyone who grows up here knows that this genius who changed the world came out of this community," she said. "It wasn't until we went away to college that we learned who Du Bois really was."

Stanley, who has lived here for almost 30 years, said the unease with Du Bois' legacy is an old story in town, and he mentioned another occasion in which a similar issue popped up — when the Berkshire Hills Regional School District's new elementary school needed a name. After some controversy, Du Bois was nixed in favor of "Muddy Brook."

Stanley said it was the communism that did it.

"I was kind of scratching my head why this big debate was going on," Stanley said. "When you look at one part of Du Bois' background, that seemed to overshadow everybody's thinking — it became knee-jerk, typical of the McCarthy era. You use the word communism and all the sudden that's all you need to know."

Stanley said that people are missing the context.

"You always need to put a person's history into perspective, the history of segregation, the ongoing promotion of inequality," he said.

An alley wall of Bruun's Main Street building that is home to Rubiner's Cheesemongers will hold another of the murals that will go up in the spring. Bruun said he is honored to host it.

"At a time in which there is this national debate and angst about statutes of confederate generals and politicians, this is a great opportunity to celebrate a perspective on inclusiveness," he said. "It is public art that celebrates and honors the struggle to become a part of the American dream."