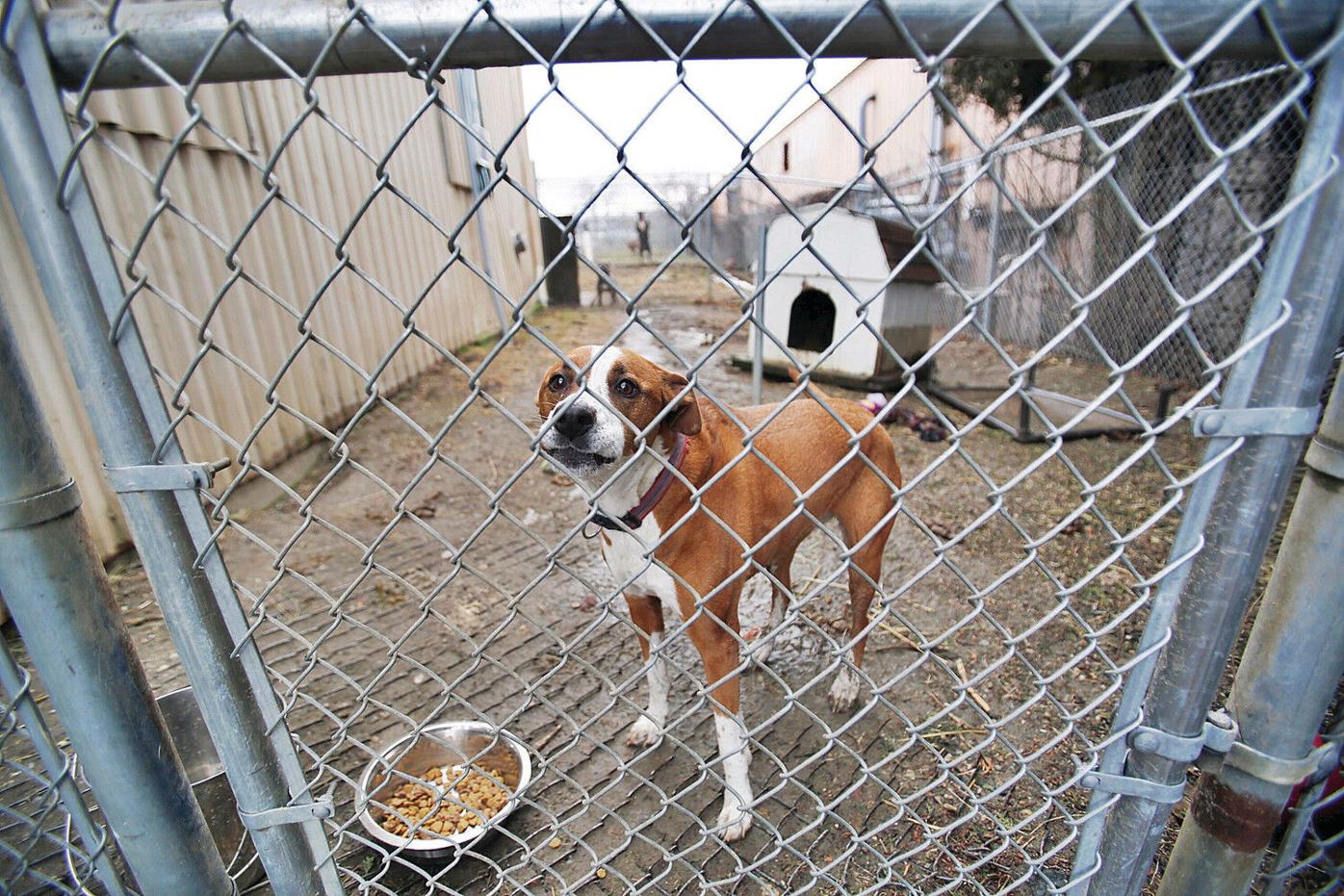 A dog stands in a kennel area at the Eleanor Sonsini Animal Shelter on Friday. 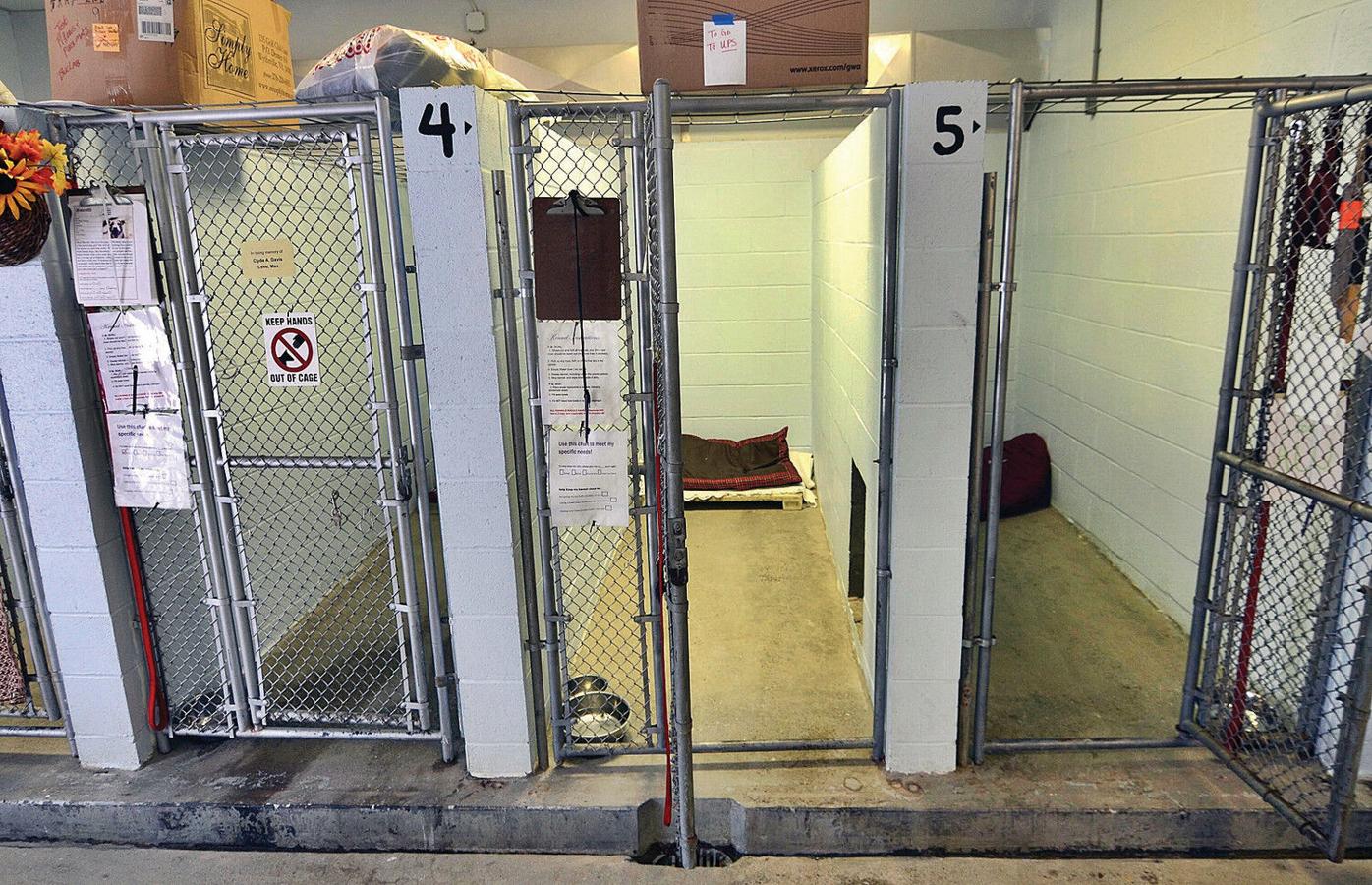 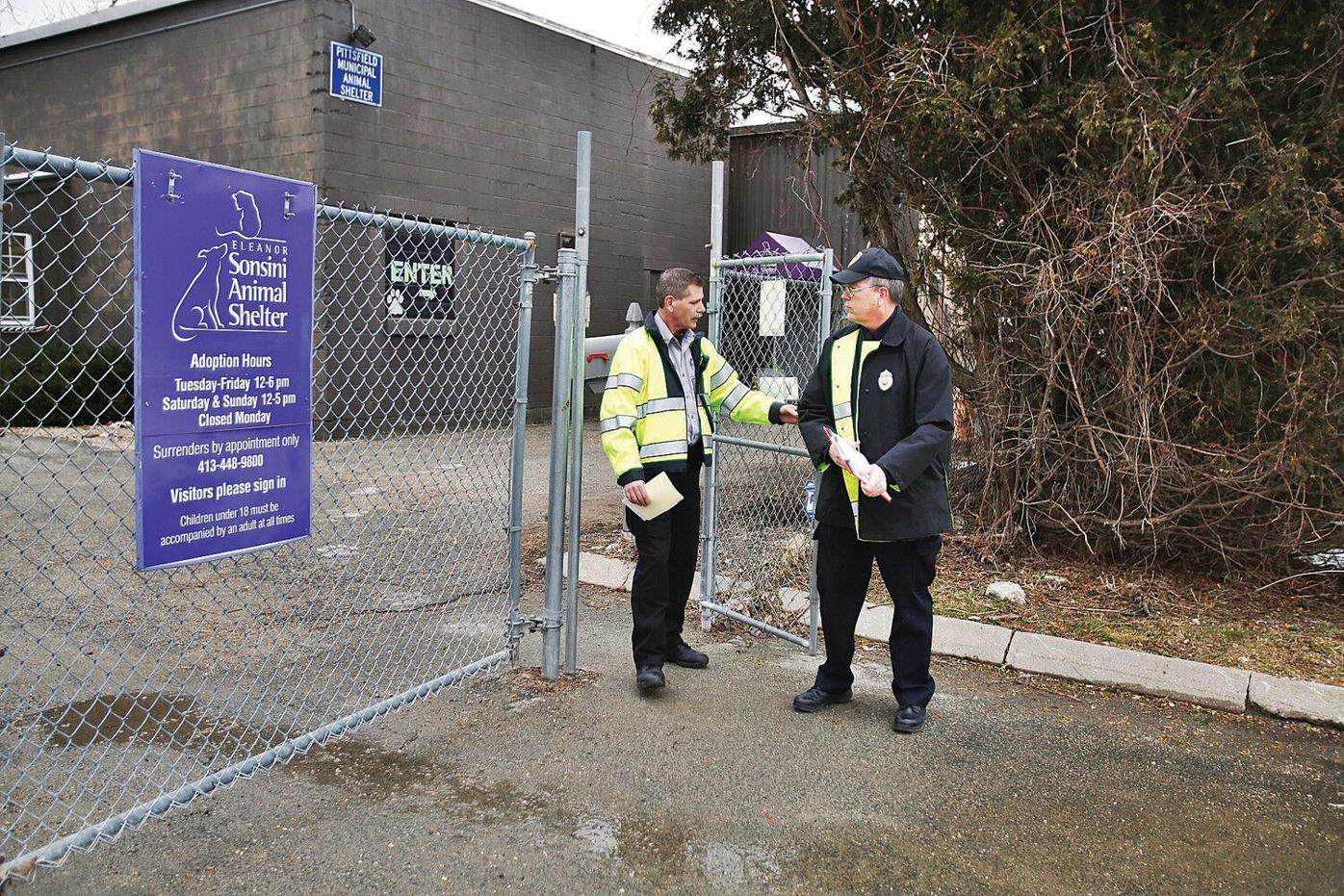 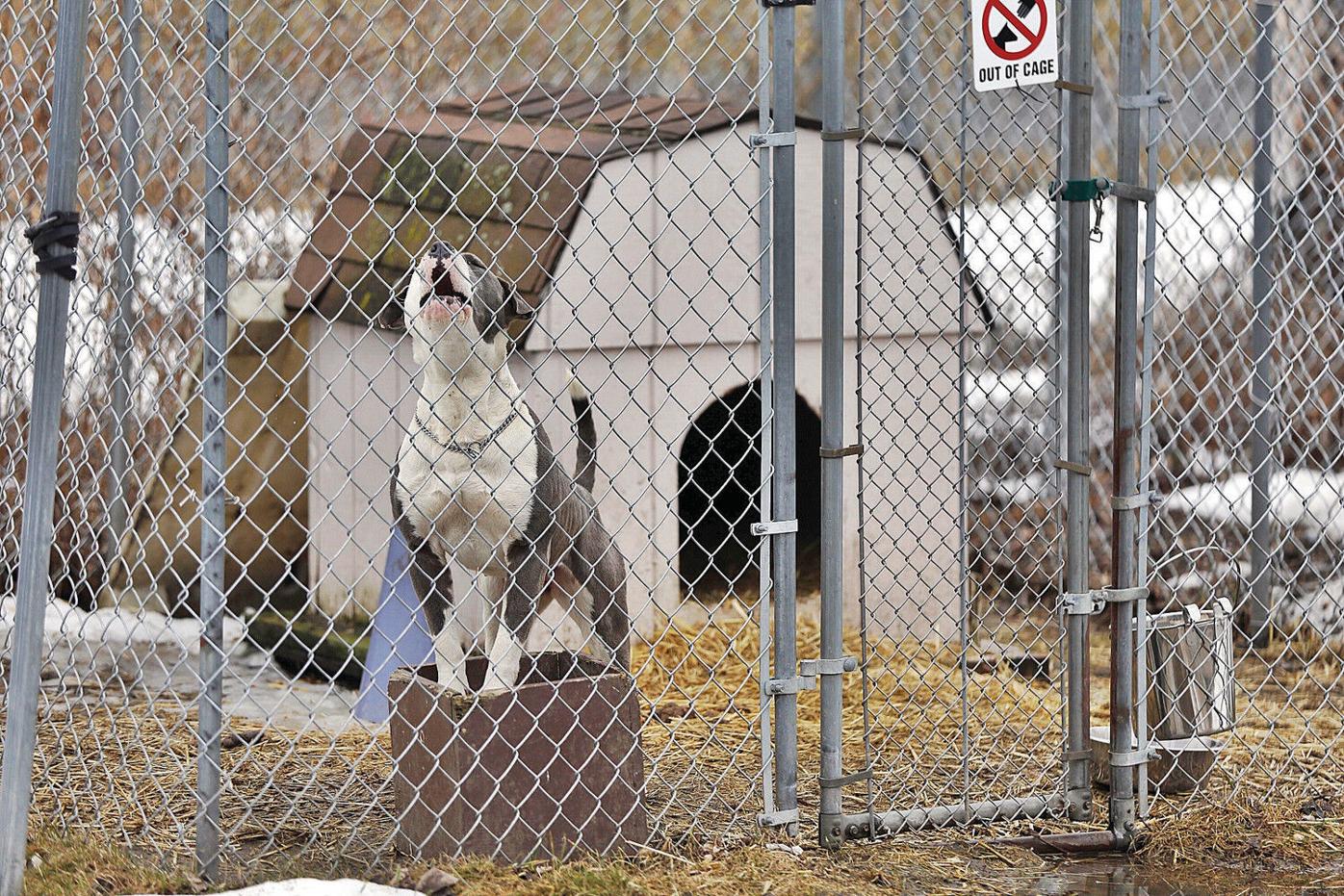 A dog stands on a box in a kennel yard at the Eleanor Sonsini Animal Shelter on Friday. 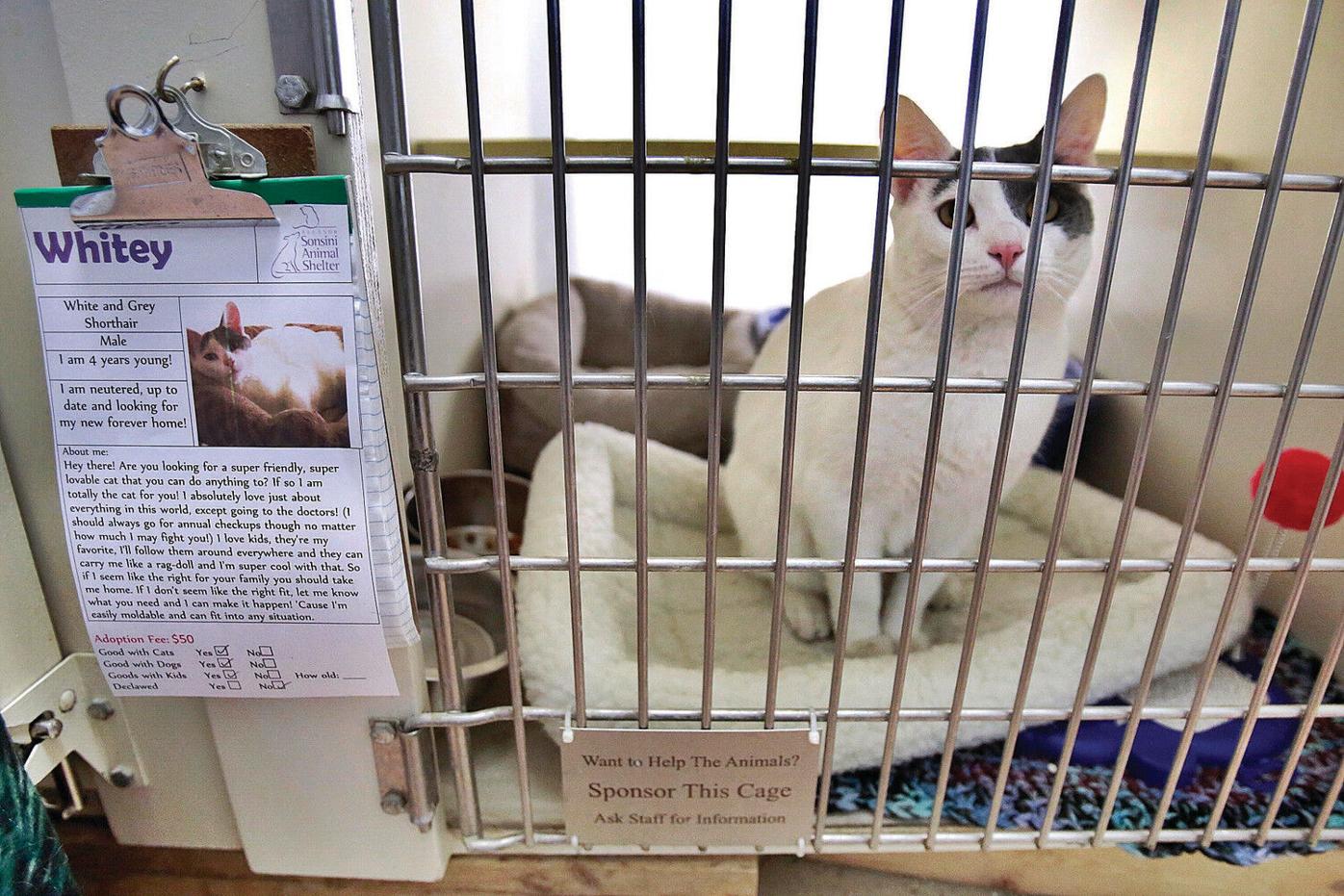 Whitey, a cat up for adoption, looks out from a crate at the Eleanor Sonsini Animal Shelter in November 2013. 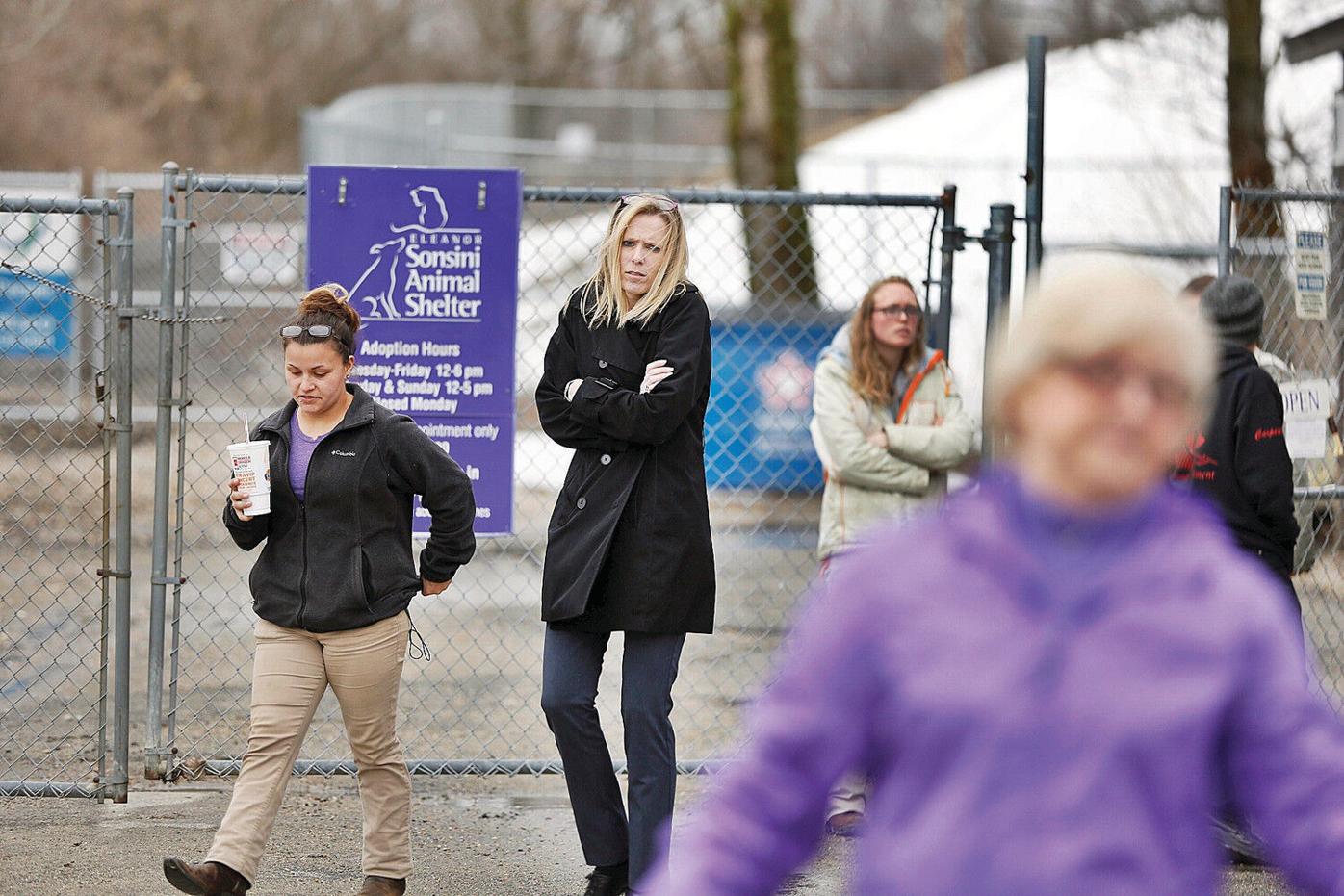 Eleanor Sonsini Animal Shelter board of directors Chairwoman Krista Wroldson-Miller, center, leaves the shelter yard with employees to approach journalists after refusing the police and city's request to hand over the premises Friday.

A dog stands in a kennel area at the Eleanor Sonsini Animal Shelter on Friday.

A dog stands on a box in a kennel yard at the Eleanor Sonsini Animal Shelter on Friday.

Whitey, a cat up for adoption, looks out from a crate at the Eleanor Sonsini Animal Shelter in November 2013.

Eleanor Sonsini Animal Shelter board of directors Chairwoman Krista Wroldson-Miller, center, leaves the shelter yard with employees to approach journalists after refusing the police and city's request to hand over the premises Friday.

About a month after the Friends of Eleanor Sonsini Animal Shelter was given notice that its contract with the city of Pittsfield would be terminated, police attempted Friday afternoon to escort employees off the premises and take control of the shelter, which is located in a city-owned building.

But the shelter employees and chairwoman of the board of directors refused to comply, and, eventually, the officers left.

"The city attorney Richard M. Dohoney has given (Friends of Eleanor Sonsini) assurances that it would not need to leave the premises," lawyer Stacey Rossi told The Eagle on Friday. Rossi is a former member of the Sonsini board of directors and is representing the current chairwoman and treasurer in her capacity as a lawyer.

Rossi said the board believes that the termination of the contract was illegal and contended that Dohoney gave Sonsini the right to remain on the property to oversee a "transition."

Dohoney denied that that is the case.

"Unfortunately, I am travelling and not able to talk," Dohoney said in an email Friday afternoon, after police left the shelter. "I can say that Attorney Rossi's contentions are incorrect and that the City's contract with the Friends is now terminated."

For the past month, the city has declined to comment on the pending termination of its contract with the Friends ofEleanor Sonsini Animal Shelter.

When reached again Friday, city spokeswoman Roberta McCulloch-Dews said that she couldn't comment on the contract because it is now a "legal matter."

Both Rossi and Pittsfield Animal Control Officer Joseph Chague said Friday afternoon that the animals at the shelter, and homeless animals detained by the city over the weekend, will continue to be cared for by Sonsini staff until the dispute is addressed in the coming days.

Since 2006, The Friends of Eleanor Sonsini Animal Shelter, a private nonprofit, has been under contract with the city of Pittsfield to care for animals that are homeless or detained by the city throughout the mandatory seven-day holding period. The shelter then takes ownership of the animals and attempts to find homes for them.

As part of that contract, the city allowed the shelter to operate on city-owned property in the Downing Industrial Park and made annual payments of $48,700 to $60,300 to the shelter over 10 years, according to the most recent contract, filed with the city in 2012.

Last year, a power struggle among administrators at the shelter came to light after it spilled into Central Berkshire District Court.

In November, several members of the Sonsini board of directors held a meeting and voted Chairwoman Krista Wroldson-Miller and Treasurer Judith Trumble off the board.

In turn, Wroldson-Miller and Trumble filed suit, alleging that the vote was improper.

At a December hearing on the matter, during which attorneys representing both sides pointed fingers at each other regarding concerns about the animals' care, Judge William O'Grady issued a temporary restraining order allowing the women to remain in their positions until a trial.

That case was transferred in February to Westfield District Court, where it is pending, according to Rossi.

Who is in control?

While news about the pending contract termination began to spread by word-of-mouth about a month ago, the city and the shelter declined to comment on the matter, leaving questions about where city strays would be cared for going forward.

It wasn't until Thursday, one day before the nonprofit was scheduled to be removed from the property, that the shelter posted a statement on its Facebook page announcing that it has submitted an offer to purchase the city building while also seeking other possible locations.

"Sonsini is not closing. Our mission continues," the post says. "Rest assured, the animals will be well cared for and they remain our top priority."

Throughout the day Friday, business appeared as usual, with the shelter's manager ,Kareena Bigelow, running the operation. Staff members took some dogs on walks, and others were seen in kennels that surround the building.

At 4:30 p.m. Friday, Chague arrived at the shelter to take control of the city-owned building.

Pittsfield Capt. John Mullin, who was also on the scene, said that their plan was to collect keys from the shelter employees and take over care of the animals inside.

But after more than a half-hour inside the building with Sonsini staff, Chague exited.

"They chose not to give up possession of the shelter," Mullin said, adding that the nonprofit would continue operation of the shelter until attorneys for both parties determine the next steps.

When asked whether the Sonsini employees were trespassing or could be removed from the property for not abiding by the contract termination, Mullin said, "We're not pressing that."

Rossi, who arrived on the scene after police left, maintained that the termination was illegal, but declined to comment on whether the nonprofit has, or will, file suit against the city.

Wroldson-Miller, Bigelow and other staff at the shelter declined to talk to the press throughout the day Friday.

"I'm not talking to you guys; I think I was clear," Wroldson-Miller said to Eagle journalists, on her way into the building late Friday afternoon.

She returned to the street later, flanked by Sonsini staff, approached Eagle journalists, demanded that a reporter share her sources about the shelter's contract with the city, and, with Bigelow, shouted at a photographer.

While Sonsini staff told police officers that they would continue to care for all animals currently in the shelter and brought to the shelter over the weekend, questions remain about who legally is responsible for the animals and what will happen going forward.

"I don't have information about the animals at this time," McCulloch-Dews said Friday.

When leaving the property, Chague told The Eagle that animals detained by the city will continue to be taken to the city-owned shelter, even if Sonsini is in control, because it's the only shelter that will accept them.

On Thursday, Berkshire Humane Society Executive Director John Perreault said that he was aware of the impending contract termination between the city and the shelter, but was not made aware of any city plans for how the animals will be cared for going forward.

"We have a great working relationship with the animal control officer, Police Department and the city of Pittsfield," Perreault said by telephone. "If they need help, they can certainly reach out to us."

An Animal Control Commission hearing is scheduled at 5:30 p.m. Wednesday at City Hall, according to the city's schedule.