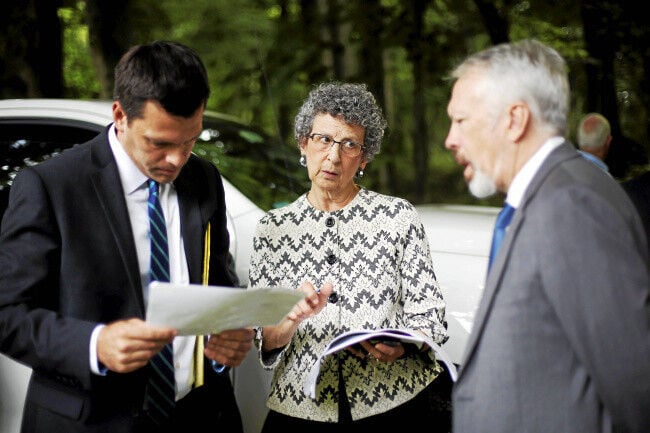 Judge Karyn Scheier of the Massachusetts Land Court tours the Elm Court property and surrounding areas on Tuesday. Eight neighbors have filed lawsuits against Front Yard LLC, citing worries about noise, traffic and light pollution. The company is the developer of a proposed 50 million Travaasa Experiential Resort that is planned for the property on Old Stockbridge Road in Lenox. Attorneys Zachary Bark, left, and Gavin Cockfield, right, represent the plaintiffs and Front Yard LLC, respectively.

Eight neighbors of the Elm Court property on Old Stockbridge Road in Lenox have filed suits against Front Yard LLC, the developer of a proposed 50 million Travaasa Experiential Resort that is planned for the property.

Judge Karyn Scheier of the Massachusetts Land Court tours the Elm Court property and surrounding areas on Tuesday. Eight neighbors have filed lawsuits against Front Yard LLC, citing worries about noise, traffic and light pollution. The company is the developer of a proposed 50 million Travaasa Experiential Resort that is planned for the property on Old Stockbridge Road in Lenox. Attorneys Zachary Bark, left, and Gavin Cockfield, right, represent the plaintiffs and Front Yard LLC, respectively.

Eight neighbors of the Elm Court property on Old Stockbridge Road in Lenox have filed suits against Front Yard LLC, the developer of a proposed 50 million Travaasa Experiential Resort that is planned for the property.

PITTSFIELD — The fate of the proposed 112-room, $50 million Travaasa Experiential Resort at the historic Elm Court property in Stockbridge and Lenox is now in the hands of a Massachusetts Land Court judge following a whirlwind, one-day site visit and trial.

At the Berkshire Superior Courthouse, Judge Karyn Scheier heard three witnesses from the group of eight neighbors who sued Front Yard LLC, developer of the resort, and the Lenox Zoning Board of Appeals following the board's approval of the project. Travaasa President Adam Hawthorne, project engineer Brent White and property manager Les Freeman testified for the defendants.

The lawsuit seeks to overturn the special permit granted by the ZBA on a 4-1 vote in July 2015. The Stockbridge Select Board approved the project nearly two years ago, and on May 2 granted a two-year extension of its special permit until Sept. 10, 2018. While about 97 percent of the 90-acre Elm Court site is in Stockbridge, several acres at the entrance and along Old Stockbridge Road are in Lenox.

Under questioning by Zachary Berk of Saul Ewing LLC, the Boston law firm representing the neighbors, Thomas Sebestyen, an attorney for Berkshire Families and Children who lives directly across the road from Elm Court, explained that he moved to Lenox 19 years ago "for a nice, quiet residential neighborhood with good schools."

Acknowledging that he sees heavy traffic from Tanglewood during the summer season, Sebestyen testified that he values the relative quiet outside his home.

He described the existing "visual challenge" of pulling out of his driveway because of sightline problems on Old Stockbridge Road, and worried that the problem would worsen from the additional traffic the resort would generate.

"Guests coming to weddings will greatly affect my ability to enter and exit my driveway safely," he stated.

Sebestyen also pondered the impact of music, fireworks and other noise from the permitted weddings — up to three outdoor events per week — at the resort. He based his fear on what he experienced when Elm Court was operated as a small boutique inn catering to weddings a few years ago when it was owned by Peter and Sonya Berle.

He said he dreaded the construction noise and heavy truck traffic he expects if Travaasa is allowed to construct its guest annex adding 96 rooms to the 16 in the 1884 mansion.

Under questioning by attorney Gavin Cockfield of Davis, Malm and D'Agostine of Boston, Sebestyn conceded there had been no traffic accidents in his vicinity and that in his pretrial deposition, he had limited his concerns to noise, light and fireworks from weddings.

Second-home owner Jane Bloomgarden, a clinical psychologist and educator who lives on Stone Ledge Road in Stockbridge, a 10-minute walk from Elm Court, said she and her husband, David, bought the land and had the house constructed 17 years ago for weekend and vacation use.

"It's a refuge, quiet, peaceful and tranquil, a way of life that lets us decompress from stressful careers we both enjoy," she testified.

Bloomgarden focused on personal health concerns stemming from "exhaust fumes, pollution, noise and light affecting our ability to see the night sky" from a 104-space resort parking area she described as 200 feet away from her house. But White, the site engineer, testified later that the distance is actually 500 feet.

Several evenings of fireworks during Elm Court's previous use as a wedding site "created a sense of hazard, very noisy and unsafe," Bloomgarden stated, adding that she had once called Lenox Police to complain.

She called the Lenox board's approval of the resort "exquisitely inconsiderate, it feels like a nightmare. The project seems like a behemoth that doesn't consider the neighborhood character and interferes with our way of life, a mega-business out to make a lot of money from the town."

Bloomgarden predicted that noisy wedding parties would continue "until God-knows what hour."

Questioned by Cockfield, the developer's attorney, she conceded there had only been two disturbing fireworks incidents in the past, and said she had not measured the distance from her house to the Elm Court mansion, which he put at half a mile.

A resident who lives a mile away from the site, Joseph Jackson of 66 Old Stockbridge Road, a self-employed medical social worker, said his house is set back only 40 feet from the road, noting that sightline problems and the current traffic flow makes it difficult to pull out of his driveway. He acknowledged there have been no accidents at the busy intersection with Hawthorne Street, "but many near-misses."

"The project would make my property less safe because of increased traffic," he testified. Jackson also expressed opposition to a potential sidewalk along the road from Elm Court to the intersection that would affect his privacy. "If the sidewalk goes through, it would put people right in my living room," he asserted.

The ZBA left the sidewalk decision up to the Select Board, which has not considered it. Berk, the neighbors' attorney, suggested that may have been an illegal delegation of authority, an issue to be determined by Judge Scheier.

White's testimony focused on protective landscaping, including two rows of 12-foot Norway spruce and hemlock trees, and a berm that would shield the parking area from the Bloomgarden residence. He also declared that no development is planned on an Elm Court open field adjacent to the Bloomgardens' property line.

Light pollution would be avoided through shielding, he stressed.

Freeman, the property manager, maintained that he has never seen cars parked along Old Stockbridge Road during major events at the mansion such as an open house held by the developer that attracted 700 visitors.

Hawthorne, the Travaasa president, contended that the majority of resorts like his have spas, a figure disputed by Berk, the neighbors' attorney, who cited a report putting it at 33 percent. According to Hawthorne, 95 percent of Elm Court spa and restaurant users would be resort guests.

If major events required additional parking, he said, off-site areas would be used, with shuttles ferrying guests to the resort.

Cross-examined by Berk, Hawthorne acknowledged the special permit has no limit on the number of guests at an event, no time limit for indoor parties and no restriction on multiple, simultaneous events at the property. But outdoor events would be located adjacent to the mansion, he stated.

Wrapping up the trial, Scheier cited "knotty legal issues that are the most difficult part of the case." Her decision could come down in a few months. Courtroom observers expressed surprise that the trial had concluded in a single day, making additional sessions in Boston unnecessary.