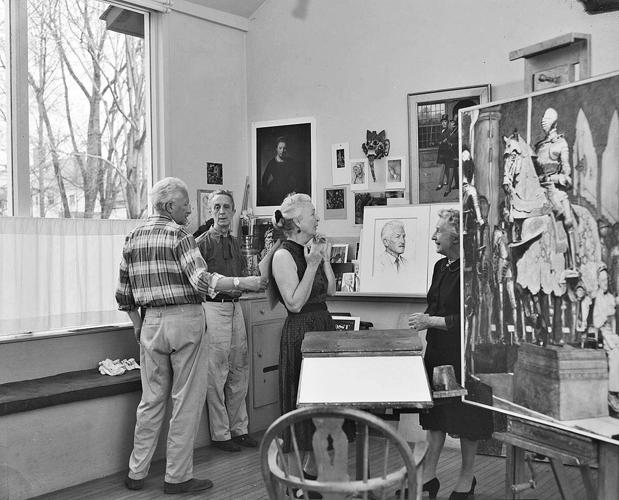 Norman and Mollie Rockwell with Erik and Joan Erikson in his Stockbridge Studio, 1962. The couples shared a friendship that helped shape the work of both men, influential in their own separate fields. 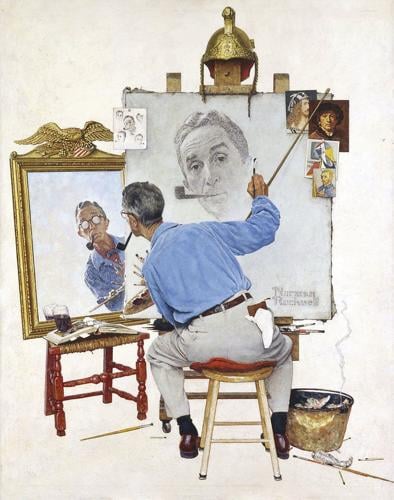 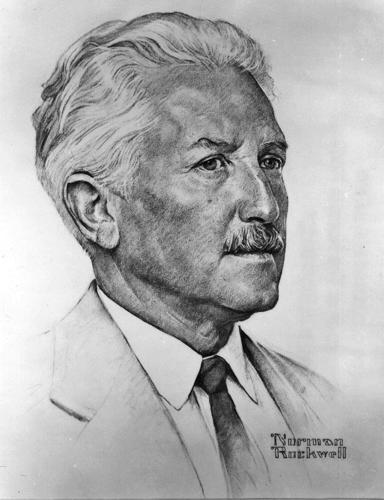 Norman Rockwell's "Portrait of Erik Erikson," 1962. Erikson, known for his groundbreaking work for his eight stages of psychosocial development and the term "identity crisis."

Norman and Mollie Rockwell with Erik and Joan Erikson in his Stockbridge Studio, 1962. The couples shared a friendship that helped shape the work of both men, influential in their own separate fields.

Norman Rockwell's "Portrait of Erik Erikson," 1962. Erikson, known for his groundbreaking work for his eight stages of psychosocial development and the term "identity crisis."

"I sure owe a lot to Erik Erikson," Rockwell says near the end of "My Adventures as an Illustrator," the artist's 1960 autobiography (as told to his son, Tom) that Abbeville Press re-released in May.

In 1954, the year after he moved to Stockbridge, Rockwell began seeing Erikson at the Austen Riggs Center. Rockwell's wife, Mary, had already entered treatment for alcoholism and depression at the Stockbridge psychiatric institute. Her husband was experiencing artistic anxiety.

"I wasn't mentally ill or anything like that. I don't think I would have cracked up. But you don't have to be so desperately sick, on the point of death, before you call the doctor," he observes in his book.

Erikson, who rose to prominence for advancing his eight stages of psychosocial development and the term "identity crisis," helped shepherd Rockwell through what the artist called his own "crisis." Their relationship wasn't bound to therapy sessions. Instead, it blossomed into a friendship that is under the microscope in "Inspired: Norman Rockwell and Erik Erikson." The Norman Rockwell Museum show is set to open Saturday, June 8, along with two other exhibitions that will help the Stockbridge institution celebrate its 50th anniversary: "Woodstock to the Moon: 1969 Illustrated" and "Norman Rockwell: Private Moments for the Masses." Since April, a fourth display, "For the People: Memories of the Old Corner House," has been paying homage to the downtown space that originally housed Rockwell's works. Like the other exhibits, it will be on view through Oct. 27.

"In some ways, I think we are an improbable museum because the way we began was with an intention of saving an old building, not with becoming the Norman Rockwell Museum," Norman Rockwell Museum Director Laurie Norton Moffatt said. "So, the story of the 50th is really fun because it's about love of community, preservation of the community."

For those unfamiliar with Rockwell's life, "Private Moments" offers helpful autobiographical details to accompany paintings and photographs from different periods of his career. The expansive show includes covers for The Saturday Evening Post such as "No Swimming" (1921), "Shuffleton's Barbershop" (1950) and "Triple Self-Portrait" (1960), as well as photographs of Rockwell with his family. For buffs and newcomers alike, it will stoke an interest in the artist's fears and motivations, an internal world Rockwell deflects in many of his most playful narrations. For instance, in "Triple Self-Portrait," humor is the immediate takeaway for some viewers.

"When you think about what the point of a portrait is, or a self-portrait, it's to make you look great for the ages, to give a great impression of yourself for posterity," said Stephanie Plunkett, the museum's deputy director and chief curator. "But of course, in true Rockwell form, he plays a joke. He has this sense of humility where he's got this fabulous-looking portrait on the canvas, but the man peering into the mirror looks very different. He's hunched. He's older. He's got clouded glasses."

The composition isn't entirely modest, though. In a corner of an easel, Rockwell makes a statement, real or aspirational, about his legacy.

"He's still placing himself within the pantheon of great artists because up on the upper-right of the canvas, he has pinned some of his favorite artists, including Rembrandt and van Gogh and even Picasso," Plunkett said.

"He loved, more than anything, to do covers for The Saturday Evening Post because he was able to develop his own ideas, but those assignments gave him the most anxiety," Plunkett said.

The art world's criticism also weighed heavily on him.

"In the '40s, abstract expressionism came to be essentially the art of the nation, and illustration was viewed as less progressive, certainly almost something to be derided," Plunkett said, "and Rockwell was really named as one of the perpetrators of this lowbrow art. I think what he was trying to figure out was what his place in the art world was going to be."

His concerns led him to Erikson, whose theory about humans' evolving identities in his 1950 book, "Childhood and Society," earned him a substantial platform in psychoanalysis. In "Inspired," museumgoers can see a typewritten and hand-annotated chart of the eight stages of psychosocial development from the Austen Riggs Center, which is now in its 100th year and assisted Plunkett with the show's curation.

"The goal of the exhibition, and what I really found to be interesting, is that the two really inspired each other. You have these two men, each at the top of their field," Plunkett said.

For example, the show ties Erikson's 1950s golden rule writings to Rockwell's 1961 "Golden Rule" illustration for the Post that says, "Do Unto Others as You Would Have Them Do Unto You."

"It's just interesting that both were working towards this topic at the time," Plunkett said. " ... Rockwell always thought that [if] he was unhappy about something, he had to suppress his unhappiness in order to create Post covers that would be palatable, that would engage an audience in a positive way. Rockwell always loved to create positive images. But what Erikson was trying to get him to do was to use his unhappiness, or use the things that frustrated him, as the impetus to do work that might actually address those things."

By necessity, the exhibit can't delve into the numerous conversations between the men during twice-weekly therapy sessions throughout the 1950s. But their correspondence is part of the show, including a note from Erikson to Rockwell that comments on the artist's portrait of him. Erikson hopes his swollen eye and uneven mustache can be remedied before Rockwell produces the final charcoal-on-paper piece, but he isn't angry.

"Dear Norman," Erikson writes. "The picture you sent for the Riggs Gallery of Senile Cases was as good as could be expected."

Feedback was always vital to Rockwell, perhaps to his creative detriment at times.

"I have always wanted everybody to like my work. I could never be satisfied with just the approval of the critics (and, boy, I've certainly had to be satisfied without it) or a small group of kindred souls," he says in his autobiography. "So I have painted pictures that didn't disturb anybody, that I knew everybody would understand and like."

Ultimately, he received that affection from many before his death in 1978. It has helped sustain the Norman Rockwell Museum for five decades.

"It is a museum that absolutely grew by public affection and public demand as people started to come to be able to look at these life-sized images that were so beautiful," Moffatt said. "I think it's a case where the people's wisdom really prevailed."