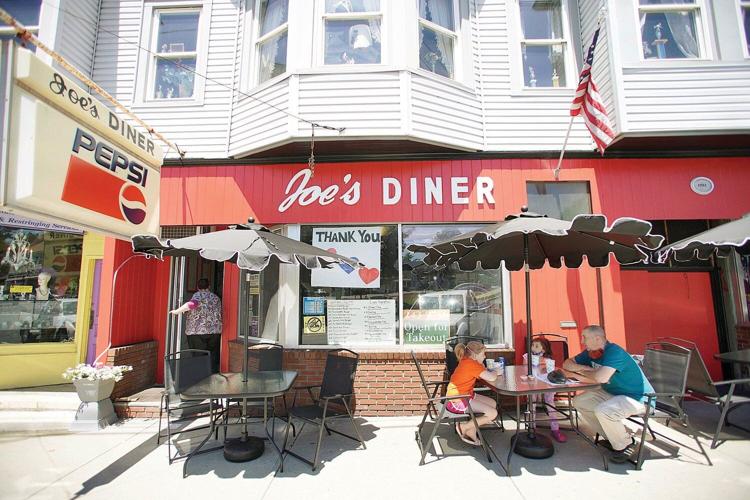 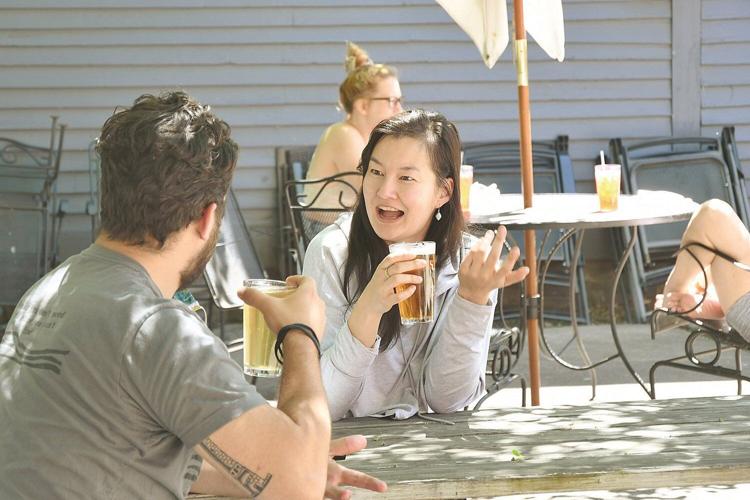 Shirley Hunt shares a beer with a friend as they dine outside Monday at the Freightyard Pub and Restaurant in North Adams. 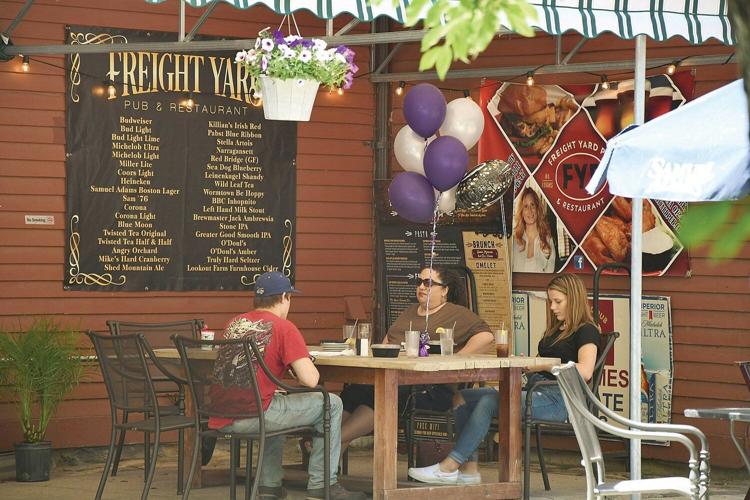 Customers dine outside under a canopy Monday at the Freightyard Pub and Restaurant in North Adams. 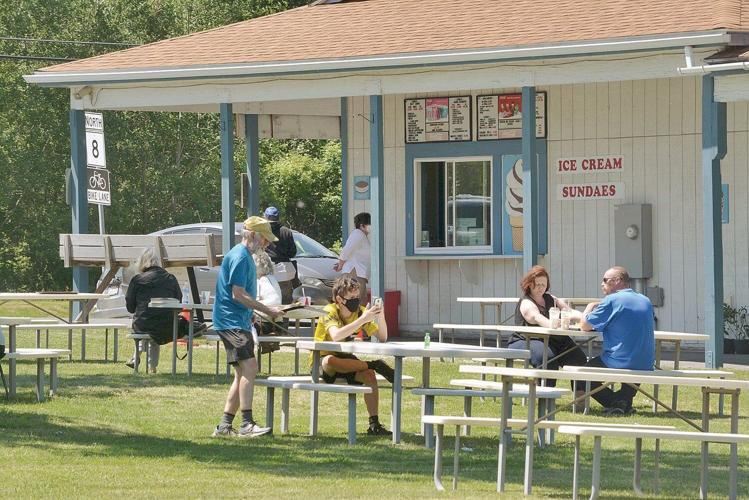 While Pedrin's Dairy Bar in North Adams has outdoor seating, customers couldn't consume their meals on the premises until Monday, when phase 2 of the state's COVID reopening plan allowed for outdoor dining. 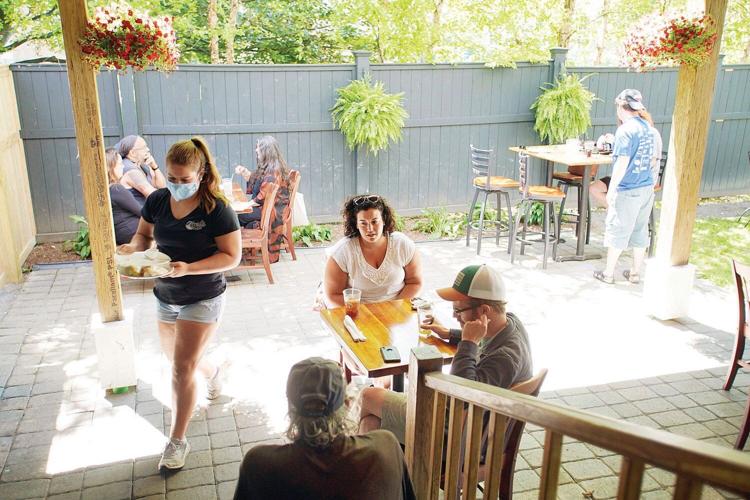 Patrons enjoy food and drinks Monday at the Heritage Tavern in Lenox, on the first day of outdoor dining.

Shirley Hunt shares a beer with a friend as they dine outside Monday at the Freightyard Pub and Restaurant in North Adams.

Customers dine outside under a canopy Monday at the Freightyard Pub and Restaurant in North Adams.

While Pedrin's Dairy Bar in North Adams has outdoor seating, customers couldn't consume their meals on the premises until Monday, when phase 2 of the state's COVID reopening plan allowed for outdoor dining.

Patrons enjoy food and drinks Monday at the Heritage Tavern in Lenox, on the first day of outdoor dining.

Local restaurateurs were champing at the bit to welcome back hungry patrons after they got the green light Monday to resume on-premise dining.

Dining establishments were allowed to welcome in socially distanced outdoor dining as part of Massachusetts' Phase 2 of the reopening process following the coronavirus shutdown. For many in the Berkshires, the long-awaited lunch rush was a small reward for the lost spring and recent hard work to pivot their business models.

"We knew with everything going on, it was going to be all about outside dining," said Roasted Garlic owner Lynne Soldato. "So we started thinking about it a month ago, putting effort into outside. It was a hard week getting ready for today, but people are very excited to be out, and we're excited to have them."

Roasted Garlic has set up a large, fenced-in porch area with spaced tables, artistic awnings, a sanitation station and laminated wall signs with a QR code folks can scan with their smartphone to bring up a menu.

Soldato said she felt fortunate her business has the resources and space to make this move.

Other restaurants like The Olde Heritage Tavern in Lenox and 51 Park Restaurant and Tavern in Lee were able to get a head start, as they have regularly offered outdoor dining options.

"We've been getting calls on a regular basis asking when we were going to open," said Heritage owner John McNinch from his front patio downtown, which is awaiting a large awning.

The Heritage has also transitioned a patio behind the building into more dining space and a makeshift beer garden. McNinch credited everyone, from his insurance company to the Massachusetts Restaurants Association to Gov. Charlie Baker, for keeping businesses in mind throughout this process.

Rob Trask at 51 Park had to lose some tables on the restaurant's typically brimming front porch, but has made up for it in part with other outdoor seating.

"To some degree," Trask responded when asked if he felt lucky to have the space. "One thing we have the benefit of is some lawn, and the state allowed our liquor license to expand to cover there so that helped."

51 Park is also in the process of putting in an additional patio on the other side of the building. They're also currently hiring. Now, as Trask says, they just have to hope for no rain.

Other spots have had to make a full pivot. There was never any outdoor dining in the days when Norman Rockwell was painting at Joe's Diner in Lee. However, on Monday afternoon, a family of four was enjoying lunch under an umbrella at one of a handful of patio tables out front.

"We've been planning," said Sergio Fortes, a cook at Joe's. "We saw Connecticut go to outside seating, so we figured we'd plan ahead, buy tables and see what would happen."

If the outdoor situation works for them, Fortes said they've got plans to seat picnic tables in the roped-off parking lot next door as well.

"People want to go out," Fortes said. "They're tired of eating at home or in their cars. They want normal life again, and I can't blame them."

The parking lot method is being employed uniquely by Craig Benoit at his Hot Dog Ranch in Pittsfield, where he is all set up to go with a handful of picnic tables out his back door and into the off-street parking lot.

"Everybody's ready," said Benoit, who posted a photo of his layout plan on Facebook that got around 12,000 views over the weekend. "From what I hear, everybody's ready to get back to this."

Hot Dog Ranch is awaiting Wednesday's licensing board meeting before being given the full OK to open out back. When they do, patrons can even enjoy Benoit's television set up mounted on the outside wall in boxes for Keno and perhaps, eventually, live sports.

It's one of the first true signs that summer will still come to Berkshire County. Shelly Swindell, who has worked at Joe's Diner for eight years, said she just missed the people, socialization and busyness that is starting to slowly return.

"It's been a long three months for restaurants," Soldato added. "It's hard to watch your waitresses not make money. It's been hard."

At Roasted Garlic, just like The Heritage, owners are relying on children and relatives to help staff up as things get rolling. And everywhere, restaurant owners are going to be relying on their Berkshire County neighbors to make this summer happen.

"The locals are going to take the Berkshires back," said McNinch. "It's going to be a local summer, and that's great for me. I've served the locals and tourists, but we hope everyone from Berkshire County can come in and enjoy the town."

Mike Walsh can be reached at mwalsh@berkshireeagle.com.