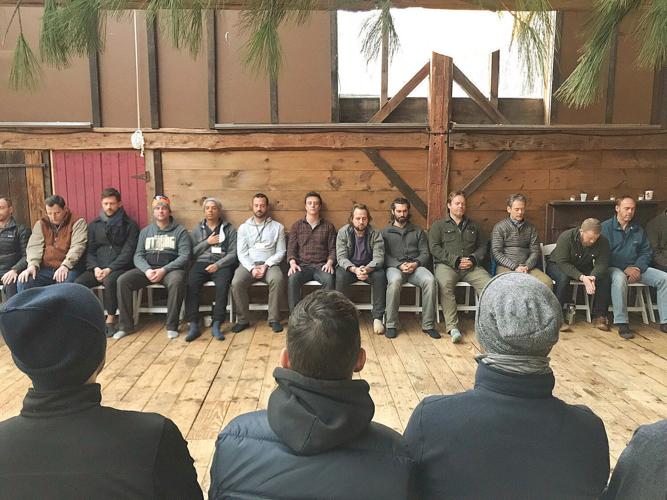 Evryman is a company that hosts weekly group meetings, expeditions and retreats across the country as a means for men "to exercise their emotions so they can lead more successful, fulfilling lives." 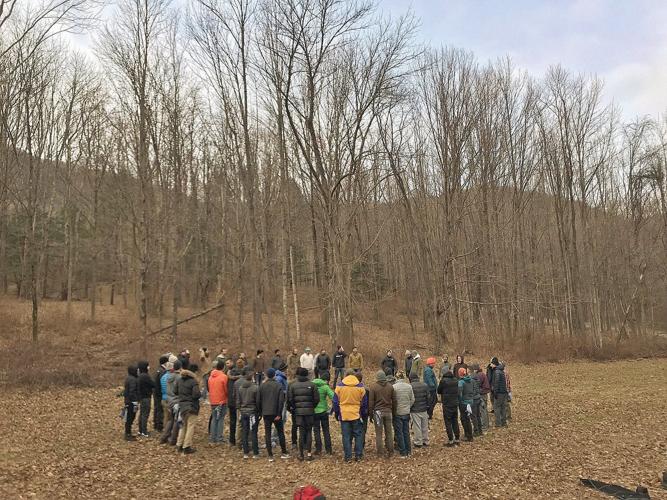 The group meetings began in the Berkshires in 2016 at Race Brook Lodge.

Evryman is a company that hosts weekly group meetings, expeditions and retreats across the country as a means for men "to exercise their emotions so they can lead more successful, fulfilling lives."

The group meetings began in the Berkshires in 2016 at Race Brook Lodge.

SHEFFIELD — In December 2016, a movement started at Race Brook Lodge.

More than two dozen men gathered with the deceptively difficult task of sharing their feelings, but through a series of exercises and activities, Dan Doty and other facilitators inspired participants to explore and express their emotions.

"A good portion of the men had a deep and profound emotional release," recalled Casey Meade Rothstein-Fitzpatrick, who runs Race Brook Lodge and attended the retreat.

The event's success inspired the formation of Evryman, a company that now hosts weekly group meetings, expeditions and retreats across the country as a means for men "to exercise their emotions so they can lead more successful, fulfilling lives," according to its website. As it grows, Evryman isn't neglecting its Berkshire roots: Its most recent retreat was held last weekend at Race Brook Lodge, and another one at the Sheffield site is scheduled for April.

"Race Brook, and the barn at Race Brook, is very much the home of Evryman," Evryman Co-Founder Lucas Krump said.

Founded by Doty, Krump, Sascha Lewis and Owen Marcus, Evryman is a benefit corporation (a business required to report mission-based progress through high standards of accountability and transparency) that is still in its nascent stage. Roughly 1,000 men have participated in its programs since 2017, but it has a far more ambitious goal: reach one million men within the next five years, largely by preparing attendees to run their own groups. At a time when the #MeToo movement and school shootings are raising questions about male behavior, Evryman's secular efforts to get men to open up areincreasinglystudied.

"The three things we say are: One, we want every man who attends to have a life-changing experience. Two, we want to give them the ability to develop some tangible tools or skills that will support them in their everyday lives. And three, we want them to experience real brotherhood, which I would boil down to authentic human connection," Krump said of the company's retreats.

The co-founder is quick to note that the company's formation preceded the #MeToo movement, but the skills and awareness it promotes can help men better understand and relate to the #MeToo movement and women in their lives, he said. In practice, participants reap those rewards first through somatic practice, or "having a guy actually check in and feel what he's feeling in his body from a physiological standpoint and just being able to own and express how he feels," Krump said.

The objective is to combat male repression.

Group exercises also help facilitate this introspection. At the 2016 retreat, Rothstein-Fitzpatrick recalled two lines being formed, with one person facing another. A list of questions or prompts, such as "the thing I'm most afraid of is [blank]," spurred one-on-one conversations that have been known to provoke tears.

"I was really impressed with the simplicity of it," Rothstein-Fitzpatrick said of the retreat, which was held at Race Brook because of his friendship with Lewis. "There's nothing hocus-pocus about it."

Krump entered the fold after Doty, who had previously run wilderness trips with young men, invited Krump to that retreat. The technology executive and entrepreneur was in his mid-30s, living in New York City, struggling to make male friends following a childhood with an "absent" father.

"I was at a point where I had been successful in business, and that was great, but it felt very empty," Krump said.

He was "blown away" by a retreat that also includes three organic meals per day, hikes and a talent show over the course of a weekend. It's not a prescription or therapy — the events are often titled "Open Source" to enable flexible agendas — but at the end of a retreat, participants typically create "work statements" that summarize their takeaways from the experience.

"I wanted to figure out a way to use my own entrepreneurial skills and business skills in a far more purposeful way," Krump said.

He approached Doty about working together, a conversation that led to a New York City brainstorming session about forming Evryman during the 2017 Women's March, where they encountered some participants from the Berkshire retreat. That gathering largely consisted of New Yorkers and Bostonians, but last weekend's sold-out event brought together more than 60 participants hailing from, among other states, Ohio, California, Georgia and Vermont.

"We have men from all walks of life — socioeconomic backgrounds, ethnic backgrounds — that attend our retreats as men," Krump said. "Literally, you'll have a union worker from Boston sitting with a yoga instructor from California sitting with a startup entrepreneur that's just sold his company for, you know, 50 million dollars, all at the same table."

The idea is to be inclusive and open, something Krump said the Berkshires' natural beauty helps facilitate.