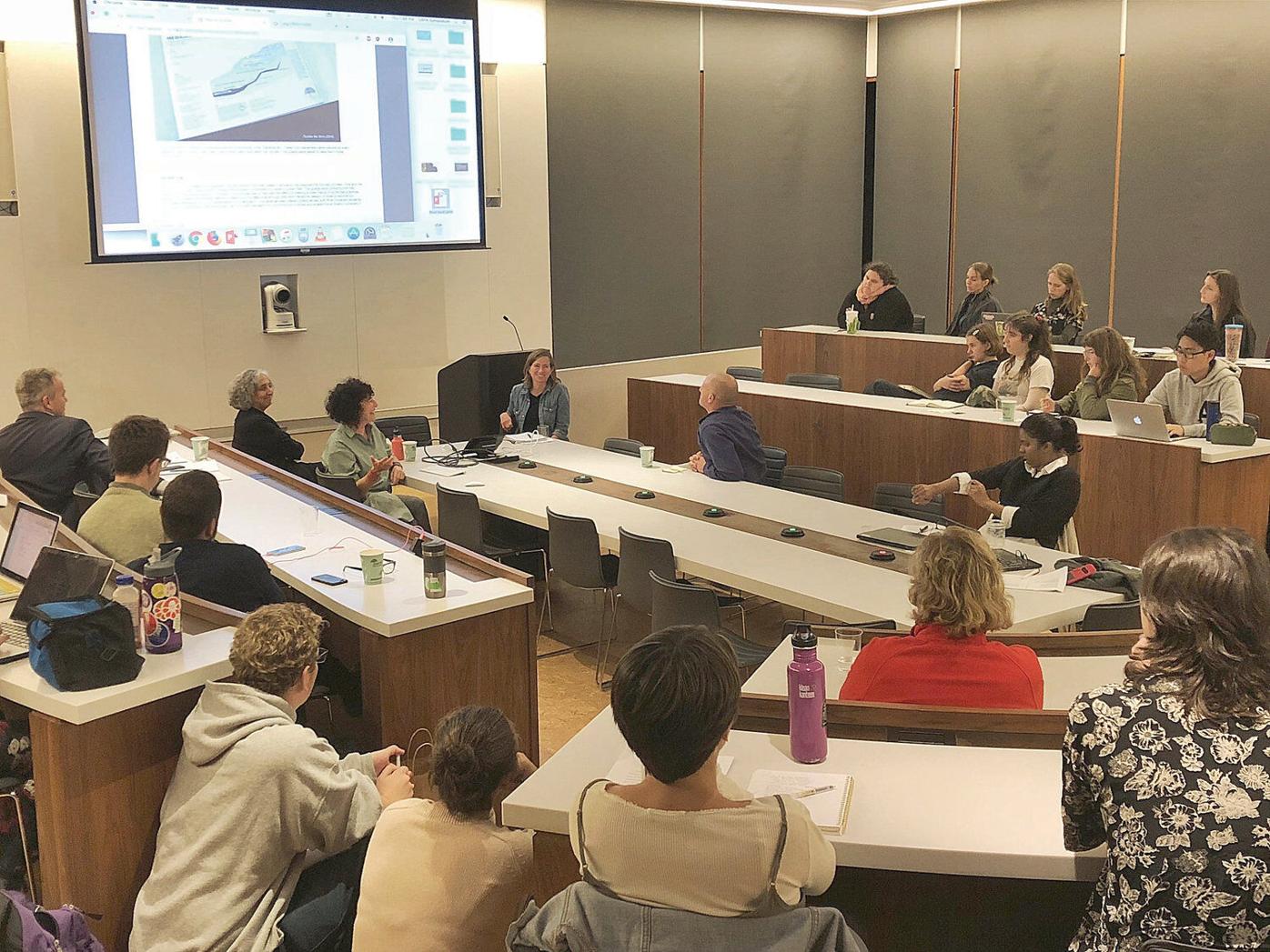 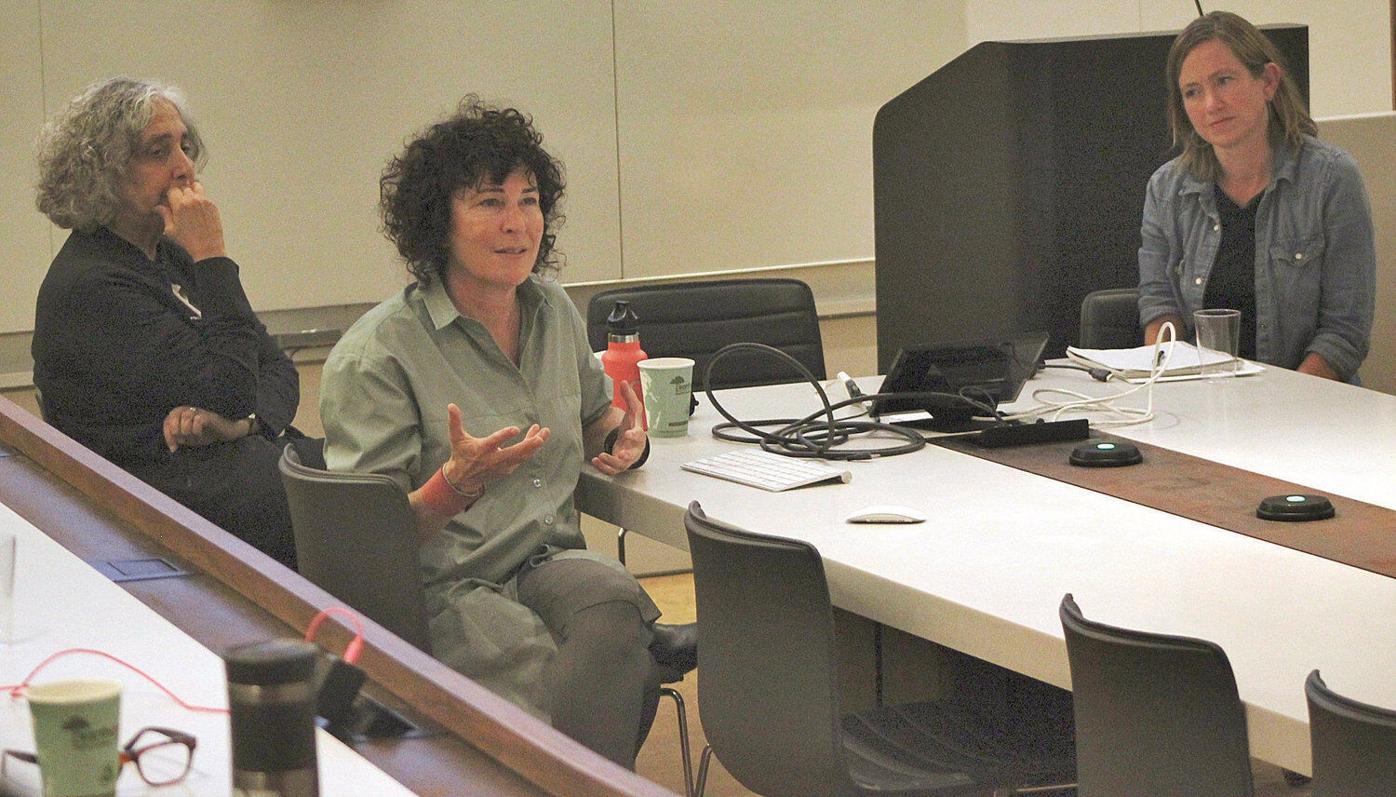 BENNINGTON — A small group of activists gathered for a public forum at Bennington College to discuss the intertwined aspects of food and social justice, with a focus on discussion about climate change relating to a potential food crisis.

Introduced by Senator Brian Campion and Bennington College Director of the Elizabeth Coleman Center Susan Sgorbati, the three activists who came to speak shared their own experiences with food and social justice.

The first speaker, Ben Hall, owns the Russell Street Deli in Detroit, which is now the city's lead purchaser of organically grown produce and sources from urban farms. He is also a member of the Chef's Action Network, a nationwide group of chefs that seek to positive influence changes to the food system.

At the forum, which was held Sept. 29, Hall discussed a website —An Eater's Guide to Congress— that he helped launch just this week which serves as a "super important" tool for elections.

"We've been working on this for awhile," he said.

Voters can use the website to search for representatives by state or zip code and view how these reps vote on food-related issues.

"This is probably the easiest way to organize against somebody making bad votes," Hall said.

Hall encouraged students to interact with their representatives if they truly want to see a change, noting that there is "nothing more important" than actually visiting a representative in order to speak to them about an issue. However, he said, a written letter is the next most useful way of speaking out to reps, followed by phone calls, and then email. Emails are easy for a rep's assistant to brush aside, he said.

He also informed students about opensecrets.org, which reveals which companies and organizations political representatives receive funding from.

Oklahoma born-and-raised Shannon Barsotti is now the co-owner Longview Farm in Pownal, a town that she is heavily involved in. She is the market manager of Berkshire Grown, a farmers market in Great Barrington, Mass., and the chair of Discover Pownal, which promotes the development of farms and businesses in the town.

"I'm coming at this from another side— the grower's side," she said.

Barsotti has always been involved in community engagement from the time she was young. Her experience with her farm and managing the market has helped her realize the direct relationship between supporting small business and a community's success.

"It's exciting to be part of a movement in Vermont and a government that's accessible," she said.

Like Hall, she encouraged Bennington College students to become "heavily involved at every level, elected or not elected."

"We need people who are engaged, proactive, and diverse," she said.

At 44 years old, Barsotti said she is considered the "youth" while being involved in Pownal's government. This, she said, is one of the reasons why politics needs younger voices.

She cited four priorities she focuses on in her work with the town: sustainable agriculture, small business development, outdoor recreation, and environmental conservation.

Marina Zurkow, the third guest, is an abstract media artist with a special focus in environmental issues expressed through animated, drawn, and performed art.

She admitted that her art does not necessarily fall under the umbrella of "social justice" but is a commentary on humans' negative effect on the planet.

One of her latest pieces included a performance dinner where she married the concepts of the structure of food to fossil fuels. Another art piece, titled "Making the Best of It," included the preparation of jellyfish into Americanized snacks. Jellyfish, she explained, are the perfect example of climate change since rapidly-warming waters are causing populations of jellyfish to skyrocket.

"[Jellyfish] are a really good example of anthropogenic changes," she said.

Students and professors were welcomed to ask questions after the presenters spoke. One professor asked the presenters whether people should start closely paying attention to the local "foodshed," the geographical location that produces food for a particular population.

"People have to learn how to eat local," Hall said, noting that local food is especially important due to the uncertainty climate change poses for food accessibility.

He spoke about how the USDA Plant Hardiness Map, which breaks the country into "zones" for growing particular plants and crops, are "shifting quickly."

Barsotti also called for increased support of locally-grown food, suggesting that people need to think about eating local, in-season produce or buying ahead from local farmers. She also hopes for policies to be made regarding where places such as schools and prisons get their food and encouraged more local food being served at these places.

"It's hard," she admitted. "It's hard to compete against Sysco."