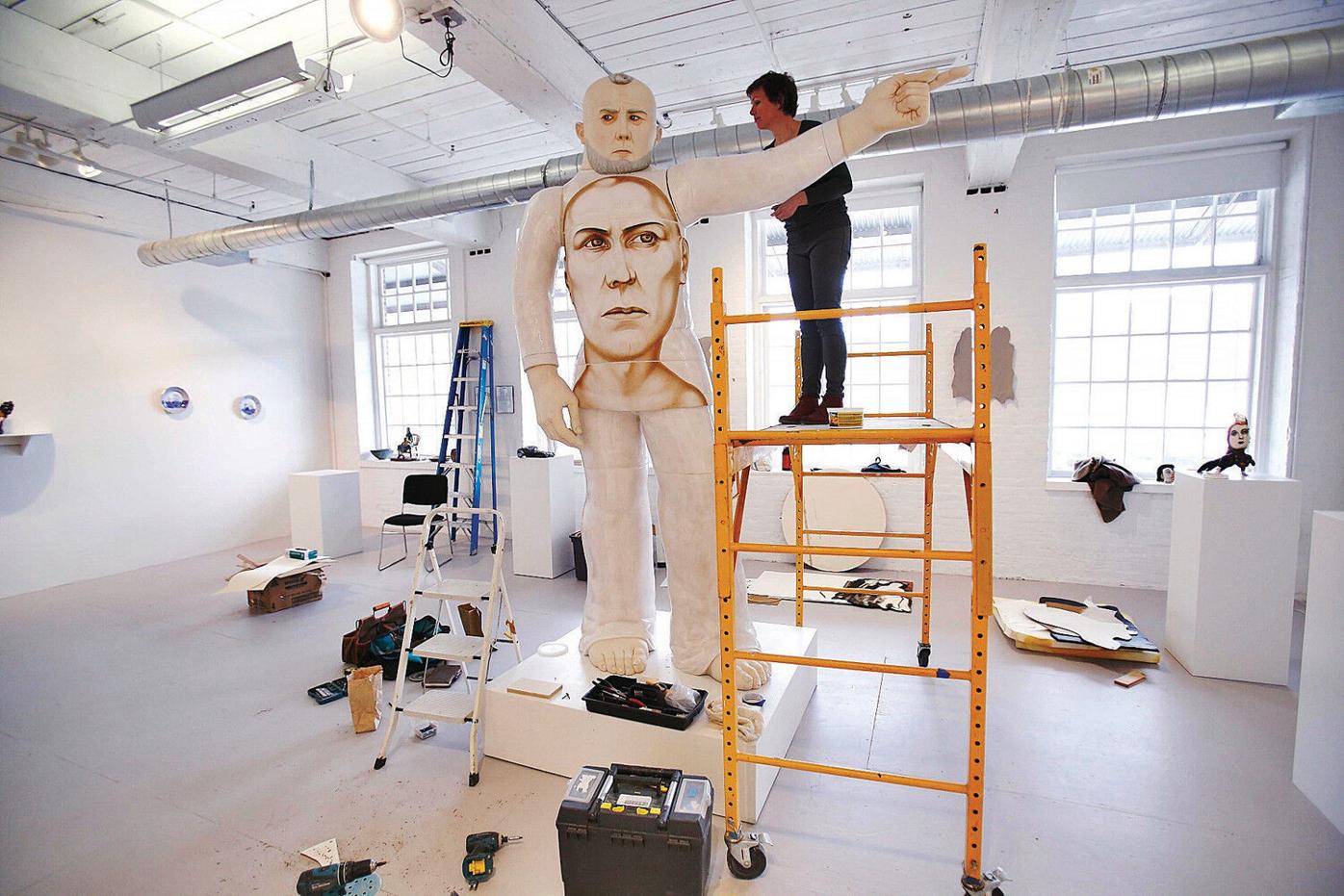 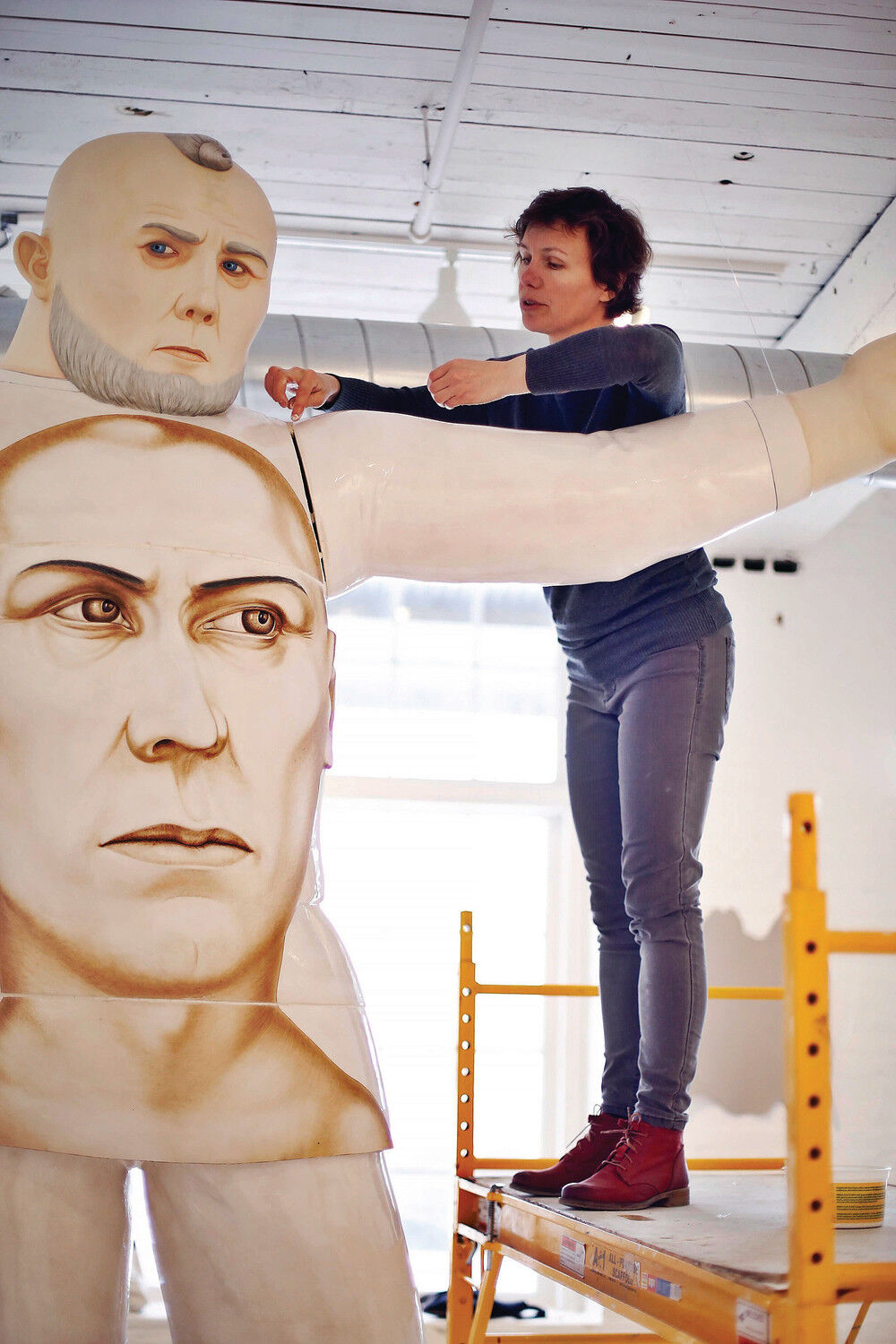 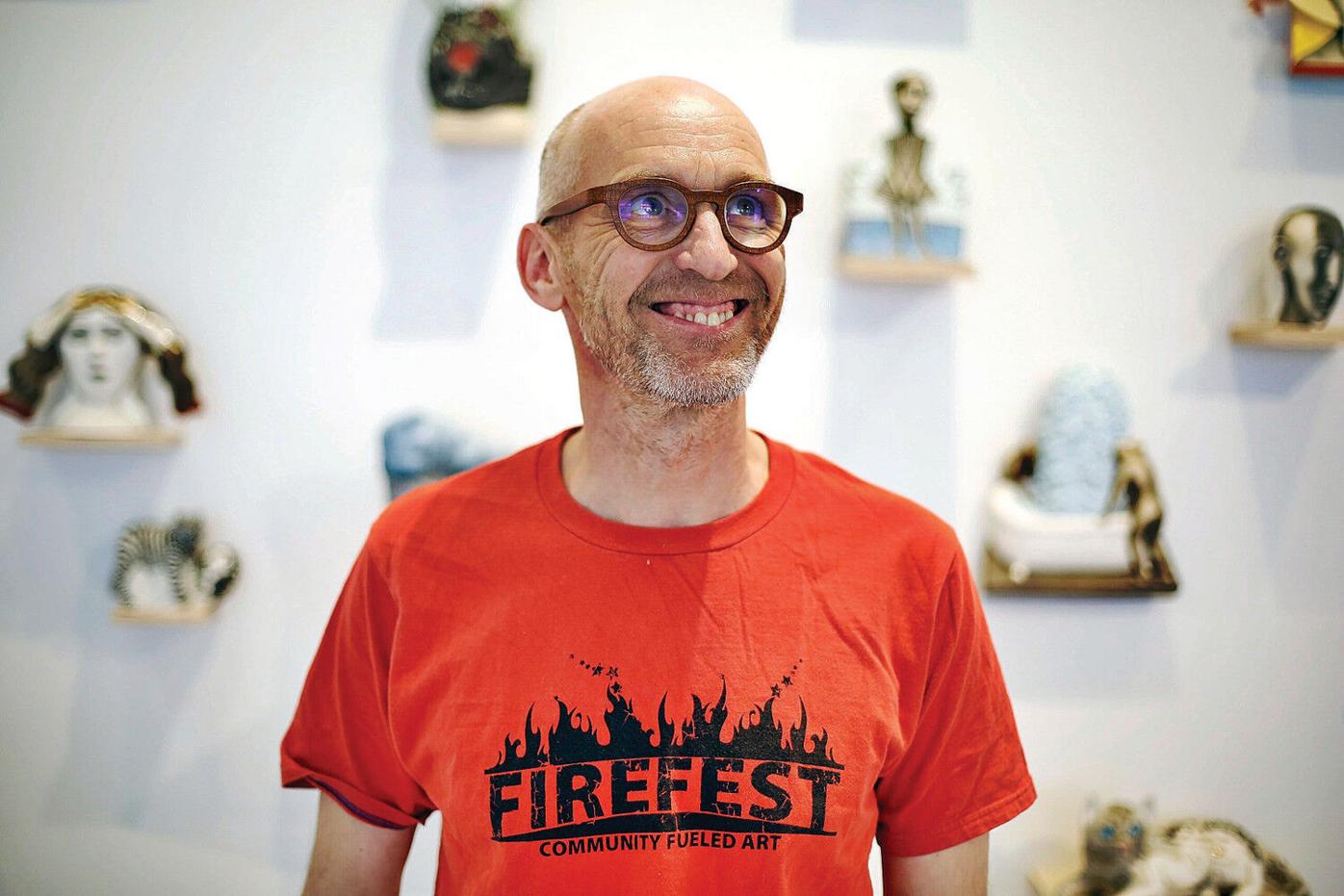 His show "Directions," which opened this weekend, features people — individuals and groups — that pull from his own story with the intent of allowing viewers to wrap their own narratives around the gathering.

Isupov approaches his porcelain figures in different scales, anywhere from 8 inches to 8 feet high, each size fashioning different levels of authority and attention.

"These are collective characters," Isupov said. "The work is really personal, I think. Each work is one of a kind."

Isupov's ceramic figures incorporate painting as an equal partner in presentation, bringing the forms he creates to their likely conclusion, but then often taking them steps further. Using this partnership, Isupov brings out further aspects of the figure's personality, sometimes conflicting ones. Other times, the painting seems to reveal a truth that would otherwise be hidden.

In his most foreboding piece, "Directions," a confident, dictator-like figure wears a shirt with a picture of his own face. "In Their Eyes" features a man riding a horse, but the horse has multiple human faces painted on it like its coat. "Growth Rings" offers a woman posing, arm outstretched across her body, while a black and white version of herself is painted onto her torso, more casual and contemplative than what the ceramic figure presents.

"Because I don't want it to be like a diary, I try to minimize the personality, so you don't think it's somebody that we know, like Trump," said Isupov. "It's mostly a collective image. I play on this idea that the person who views them recognizes in each of them somebody that he knows."

In many ways, these figures represent transition, both for the work and for Isupov himself.

"This exhibition is in the middle of a process to figure out where I'm standing as an artist and a person because it's in the middle," he said. "I'm 54, that's already not young, but I'm not old, so you have this transition. It's about some sort of transition or searching. It's a mix of many things."

Isupov was born in Ukraine, where he attended art school from the age of 11 at the insistence of his two artist parents.

"I didn't choose for myself this job," Isupov said.

The idea was to create professional artists by preparing them for art university, but after graduating, Isupov wasn't so sure he wanted to continue with painting. He was also frustrated by the corruption of Ukranian art schools, where administrators took pay-offs to accept students.

Isupov ended up in an Estonian school, which he said was less corrupt, more democratic and of a higher professional level, and it was there that he found ceramics, which he studied for six years.

"In the painting, I'd been struggling," Isupov said. "It was my parents' art, and I had been around art a lot, and all the time it was demanding on my ego. I felt insecure. Ceramics gave me more freedom because there wasn't much expectation from artists. It was a new level of expressing myself."

The Estonian government gave him citizenship after it split from the Soviet Union, but Isupov ended up getting married to an American woman and settling in the United States with her in 1993. Living in Louisville, Ky., he had to figure out how to forge an art career in a foreign system.

"I started from the beginning," said Isupov. "I didn't speak English. I learned all the capitalism and language at the same time."

Isupov began with craft shows and worked his way into galleries and museums over time, eventually moving to Cummington. Though he's settled in the United States, he still spends time in Estonia, and he sees its influence on his current work.

"My Slavic background is definitely visible," Isupov said. "I'm not using some national costumes, but a lot of images feel really readable but more invisible. It's probably a lot gotten from Estonian icon paintings, maybe because of the influence of the idea before the icons were painted. It's a narrative story for people who aren't able to read — or something that symbolizes what the story is about."

What finally appears after all the influences — his heritage, technical aspects, the process, the personal aspects — Isupov would prefer to allow viewers to decipher. He says he prefers it when people see the image and it clicks with them, rather than relying on guidance he gives. Sometimes, people ask him what a particular work is about and Isupov says he makes something up if he answers at all.

"A lot of times just the process takes me there," Isupov said. "A lot of time something small sparks, like I make one work and realize that I want it to be a little bit different. So I'll make it a little different and forget what story is behind it. This process helps really clearly and directly say something about my personal story. But a lot of times people ask me, and I lie to them. I tell them what they want to hear."

For him, the final result is part of a journey where each step away from the original intent makes it more of a mystery and makes the origin less critical.

"It's almost like walking on stairs," he said. "Each work takes you to the next one and you forget why you took the first step."

When: On view now through July 22. The gallery is open during May-June, Thursday-Saturday, 11 a.m.-5 p.m., by appointment, and extended hours during Memorial Day Weekend. July-August, open daily 11 a.m.-5 p.m.