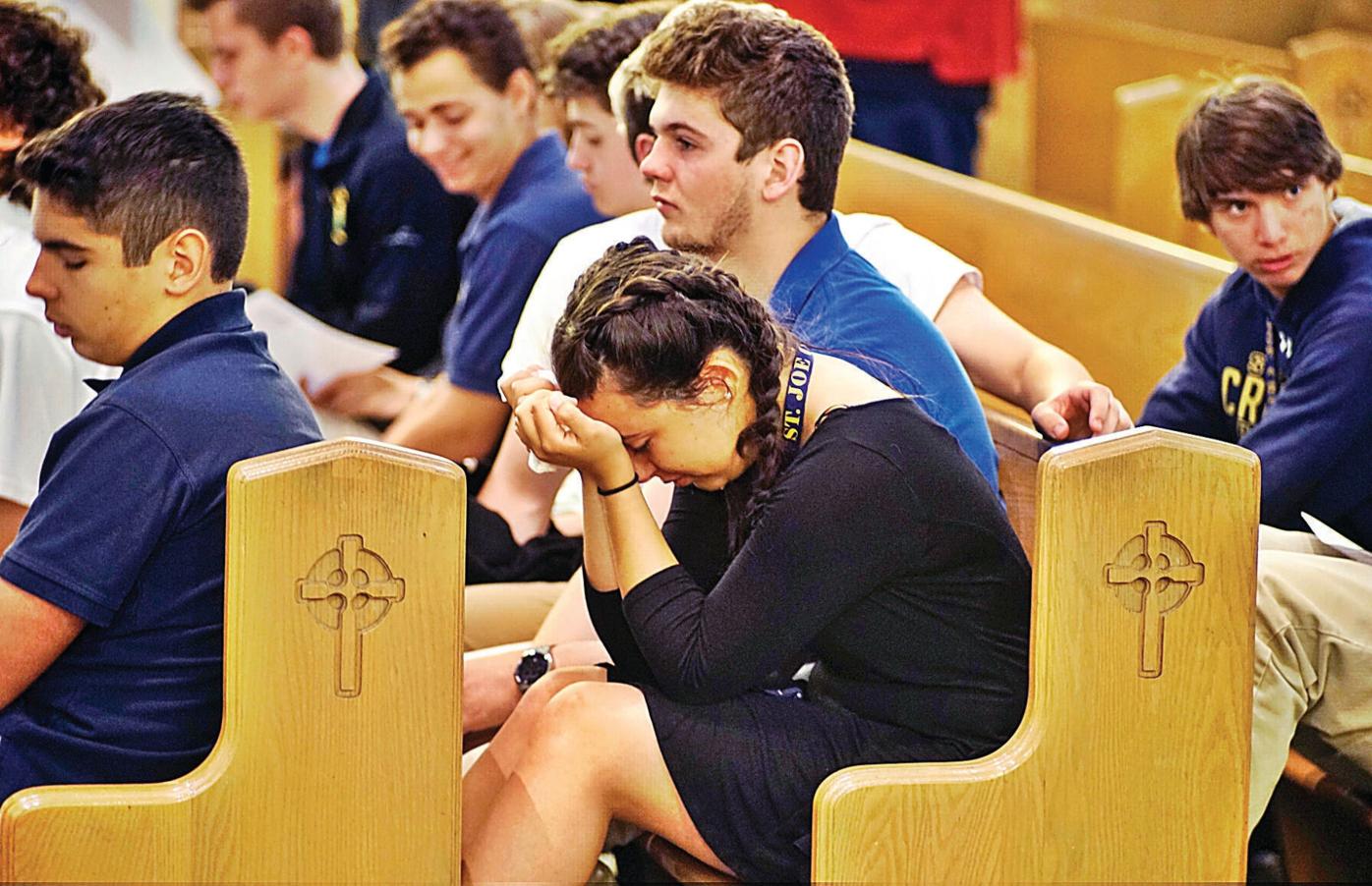 Royanne Jordao, 17, cries during a song at the last assembly and Mass for St. Joseph High School in Pittsfield as the school closes forever on Friday. 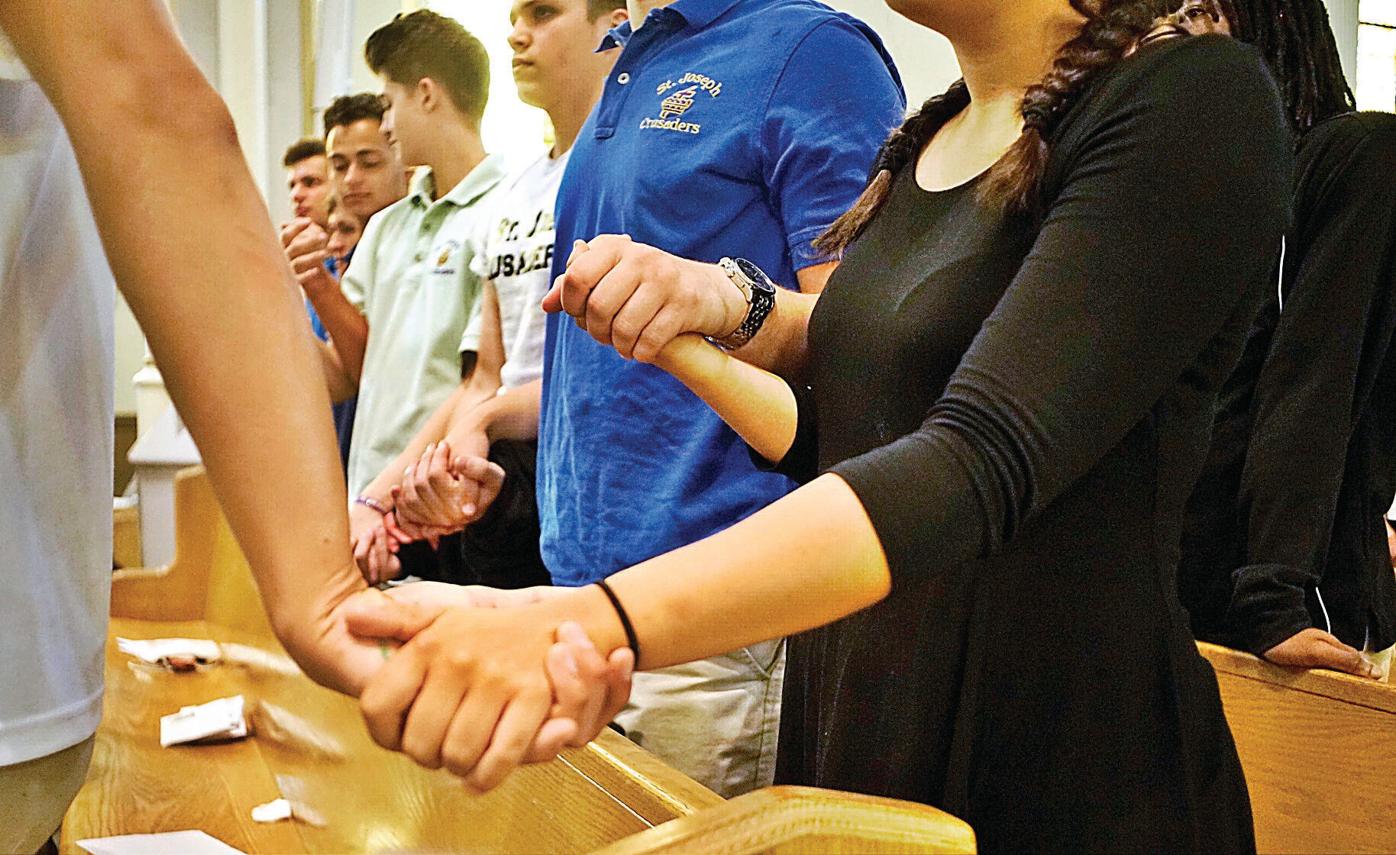 Students hold hands during the Lord's Prayer on the last day of school for St. Joseph High School in Pittsfield on Friday. 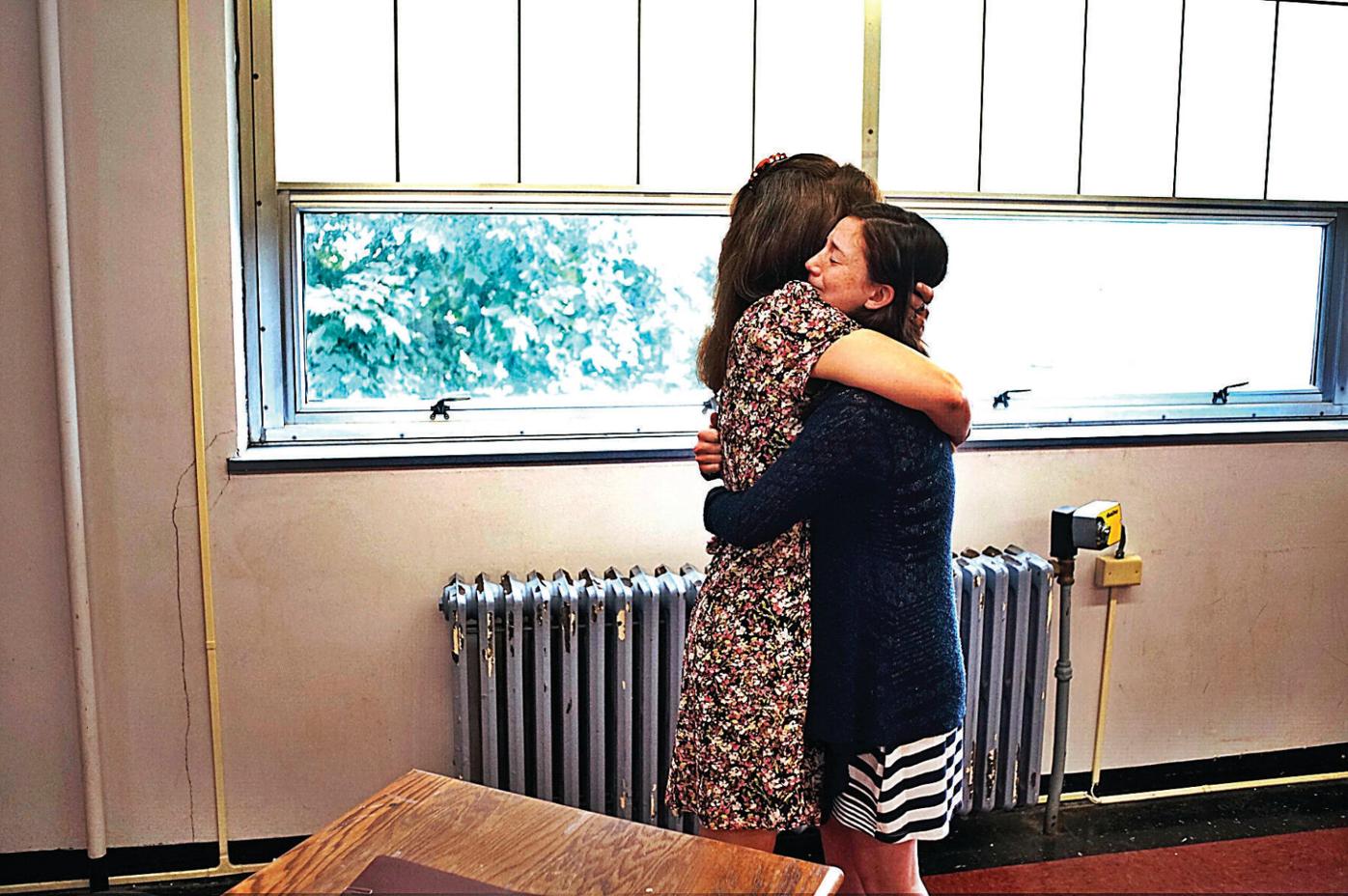 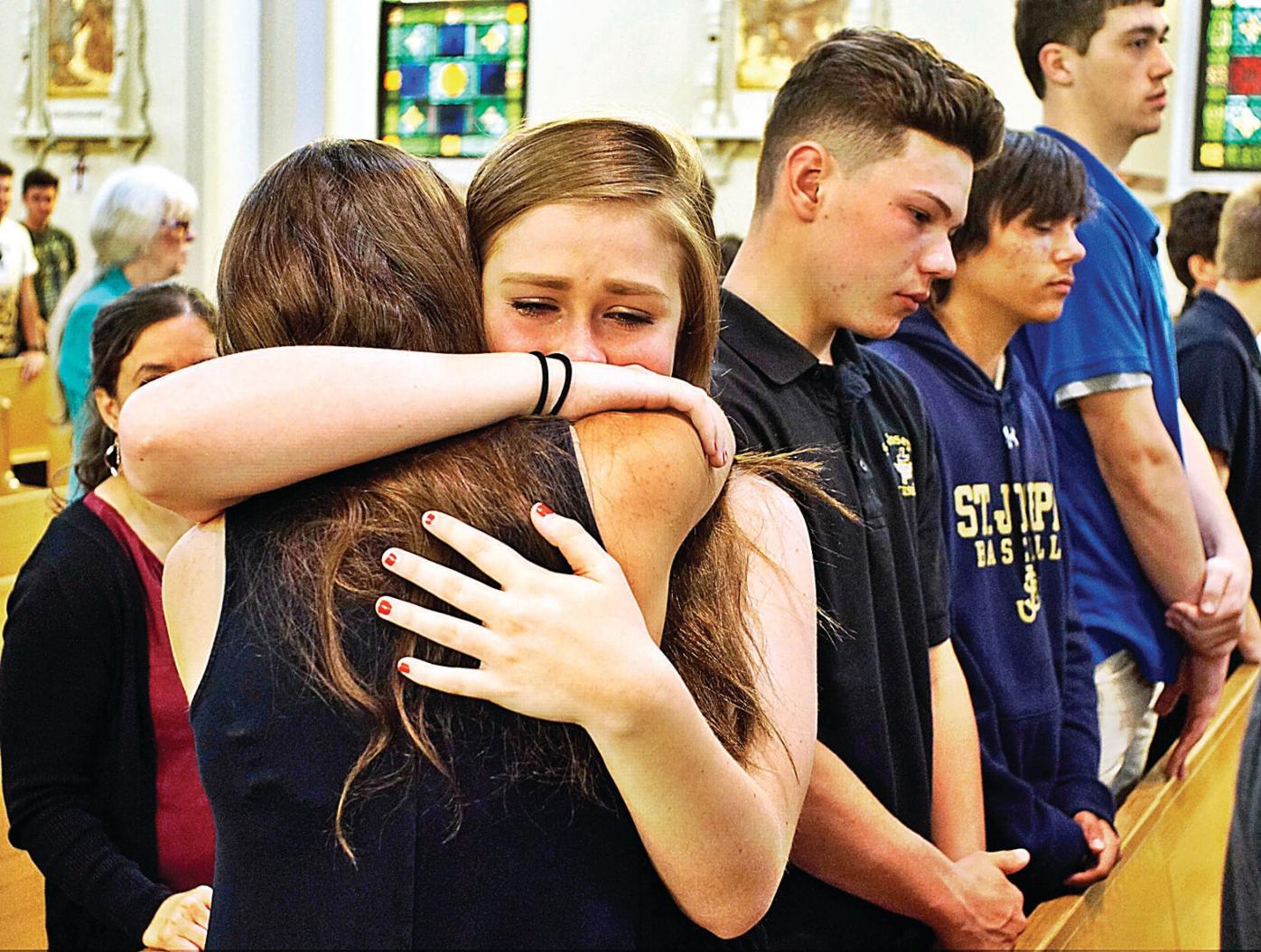 Sarah Squires, 15, hugs her friend Hannah Chrzanowski, 15, on the last day of school for St Joseph High School in Pittsfield on Friday. 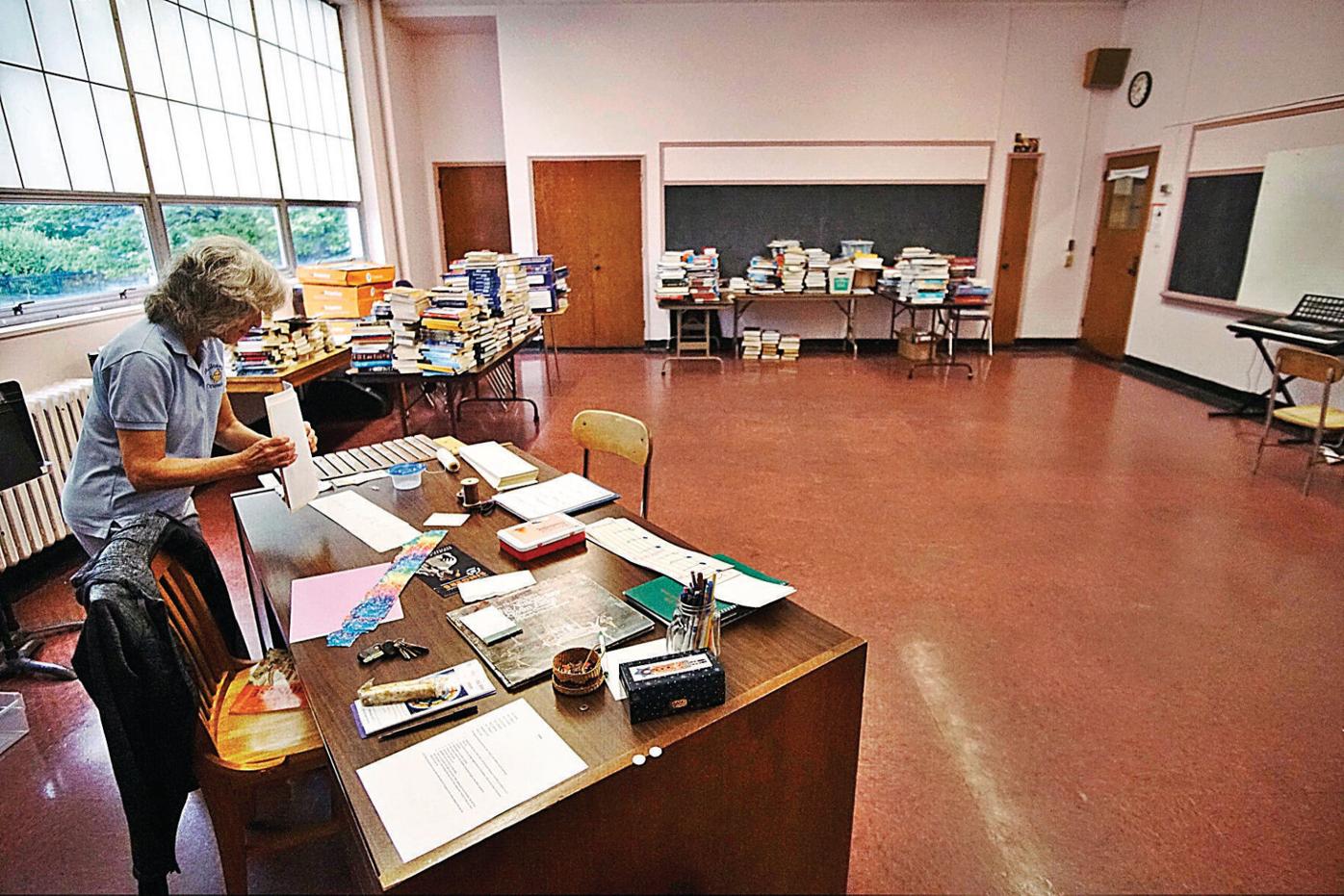 Music teacher Bonnie McCubbin cleans up her classroom at St. Joseph High School in Pittsfield as the school closes its doors after 120 years.

Royanne Jordao, 17, cries during a song at the last assembly and Mass for St. Joseph High School in Pittsfield as the school closes forever on Friday.

Students hold hands during the Lord's Prayer on the last day of school for St. Joseph High School in Pittsfield on Friday.

Sarah Squires, 15, hugs her friend Hannah Chrzanowski, 15, on the last day of school for St Joseph High School in Pittsfield on Friday.

Music teacher Bonnie McCubbin cleans up her classroom at St. Joseph High School in Pittsfield as the school closes its doors after 120 years.

PITTSFIELD — "What does goodbye mean? It means, God be with you."

He read from the Bible's Ecclesiastes Chapter 3. It begins: "There is an appointed time for everything."

For the students of St. Joe's, Friday was about goodbyes.

Last October, the diocese announced the school would close at the end of the school year amid lagging enrollment and an operating deficit of $4.5 million over the last five years.

"There is a time for everything," said Shershanovich, pastor of St. Joseph's church. "I just hope and pray that you'll always remember — you'll always have a place at St. Joe's."

For Michael Garrity, it was time to say goodbye to his hope of starting his teaching career at St. Joe's.

"What created such a family and a home is no longer open to us," said Garrity, a 2014 alum and current student at Massachusetts College of Liberal Arts. "It's very hard to accept [it's closed]."

St. Joe's, the only Catholic high school in Berkshire County, started the 2016-17 school year with 68 students; a decade ago, it enrolled nearly 300. The school graduated 19 students earlier this month in its 115th commencement.

Parents, students and alumni fought to keep the school open after the closing was announced, forming a grassroots organization, St. Joe Strong, to protest the decision by the diocese. The end of the road came after an appeal to the Most Rev. Mitchell T. Rozanski, bishop of the Roman Catholic Diocese of Springfield, and the Congregation for Catholic Education of the Vatican.

"There was no going further from that," parent Kristina Kisiel told the Eagle on Thursday. "There was just nothing further that we could do to try to save the school."

"I was kind of hoping this would be my place to retire," Sanchez said. She had only been the school's secretary for about a month when the impending closure was announced. She previously worked for Greylock Insurance, but wanted a job more connected to her faith, she said.

Sisters Emily and Leanne Hamilton consider themselves basically raised at St. Joe's. Their mother, Heidi Hamilton, taught math for 19 years at the school.

"Nothing has quite hit me yet," she said. "I tried to keep this year as normal as I could for the kids."

She fell in love with St. Joe's soon after she started.

"I really never wanted to leave," she said. "Like it means to everybody ... it's family."

Leanne Hamilton, a rising sophomore at St. Michael's College in Vermont, remembered when she got a call telling her the school was closing.

"I broke down in tears," she said. "Nobody wants it to close. It's like a second home."

"It's kind of like your childhood is being ripped from you," said Emily Hamilton. A rising junior, she'll be attending New Lebanon High School in New York in the fall.

Students are headed to various schools in Berkshire County and New York. Rising senior Jake Felix will be attending the Darrow School in New Lebanon.

Felix shared a few minutes with music teacher Bonnie McCubbin before Mass on Friday. This year, she spent study hall periods teaching music to Felix and his friend, rising senior Brandon Williams, at their request.

"I can teach anybody, anywhere," she said. McCubbin has been a teacher since 1971.

During the short period he had with McCubbin on Friday, Felix found himself at one of the classroom's keyboards, playing "Close to You" by the Carpenters.

"It's been a difficult year, but a beautiful year," McCubbin said. "I know people are resilient."

That resiliency could be found in rising sophomore Delaney Thurston.

"It was pretty depressing at first, but I feel kind of at peace about it," she said.

But in the beginning, there were tears.

Kate Wiles, a 2016 graduate of St. Joe's, learned the school was closing via email.

"I was stunned," she said. "Everyone assumed we'd be open for a few more years."

St. Joe's shaped her into a different, happier person, she said.

"It meant basically everything to me," she said. "I know who I am now."

She attended the school's final Mass and awards ceremony, as did other alumni and parents, many of whom were moved to tears.

Principal Amy Gelinas had a simple message of thanks for the students during the ceremony.

"You stayed for the whole year," she said. "You're a part of the St. Joe family. You'll have that forever."

"I am so glad that I had the pleasure and the honor to [work] with you," she said. "This is a time for celebration. This is a time to celebrate you."

Cote conferred many academic, sports, co-curricular and college-specific awards on students to loud cheers and applause.

She cried briefly when she first got up to speak, but ended the ceremony on a hopeful note.

"I am absolutely positive that no matter where you go, you are going to be successful," she said.