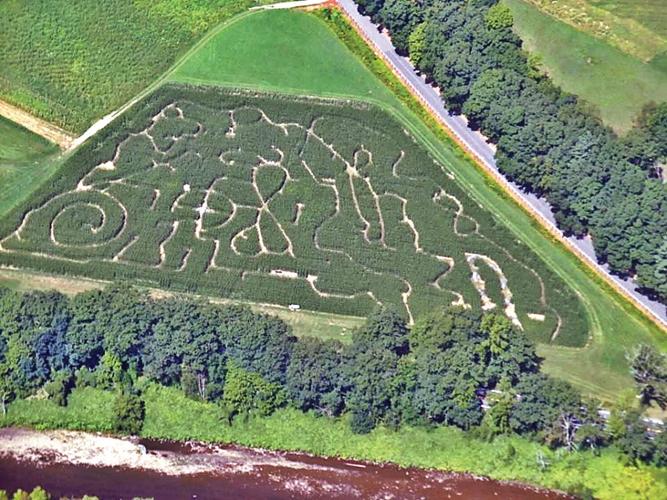 The corn maze at Hicks Family Farm in Charlemont is five acres with a scavenger hunt and a spooky nighttime maze for adults. 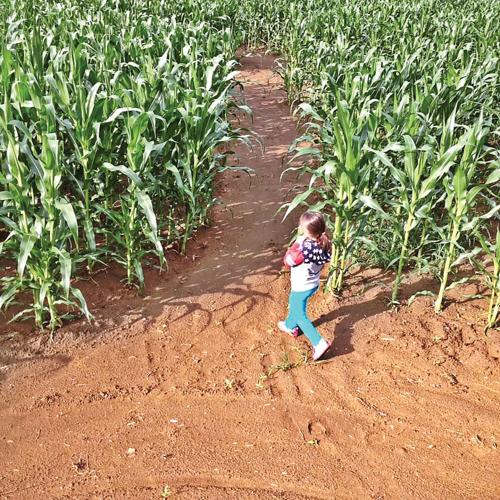 The corn maze is family friendly during the day and scary fun at night.

The corn maze at Hicks Family Farm in Charlemont is five acres with a scavenger hunt and a spooky nighttime maze for adults.

The corn maze is family friendly during the day and scary fun at night.

"Cherish wide open spaces. Make yourself herd. Ewe are what ewe are!" a sheep advises at one point.

But the Charlemont farmers who run one of the area's most popular weekend attractions aren't trying to leave you dizzy and wondering why you would willfully enter a field of confusion.

"It's not hard," Tammy Hicks said on a recent Friday afternoon of the five-acre maze that is open through the end of October, "it's fun."

This reporter, who made several wrong turns when trying to navigate to the farm, can confirm that Hicks' description is accurate. Now in its seventh year, the labyrinth has occupied a trapezoidal patch of land next to Route 2 since the beginning of summer. With rows of trees and the low roars of passing vehicles distinguishing different sides of the labyrinth, orienting yourself isn't going to cause many headaches. But getting through the maze as fast as you can would be a mistake.

For one, a scavenger hunt awaits. This year's theme is pumpkins. The Hicks are challenging maze-goers to count the different real, plastic and pictured versions of Halloween's staple item as they traverse the paths.

Additionally, five areas of the maze contain various items to be checked off. Four of these routes are named after the seasons. The fifth, with a fairy, unicorn and dragon, among other objects, is titled, "Myths, Legends & Folklore."

A sixth route is filled with dead ends, but, like the other options, it offers educational signs. The information on them is elementary in some spots — descriptions of the equinoxes and different winter holidays, for example — but adults may learn something along the way, too. For example, visitors see the Hicks' family tree early on, as well as some bits about the farm's history throughout.

The fifth-generation farm has been around since 1933, Paul Hicks said. His father, Richard Hicks, died about eight years ago and would've initially resisted the idea of having a corn maze, according to his son.

"If he was alive, first thing, this would've been very stupid [to him]," Hicks said. "But then, once he got to talk to everybody, then he would've lived here."

When one of Hicks' sons, Ryan, expressed interest in keeping the 80-acre farm after his grandfather's passing, Hicks gave it his blessing, provided they created another revenue stream to subsidize the endeavor.

"Something's got to pay for it," he recalled.

Thus, they came up with the idea for the corn maze. Each year has a different theme, with a "Wizard of Oz" focus last year. (Visitors counted yellow bricks instead of pumpkins.)

The Hicks also attempted to extend the pumpkin focus to the maze's design this year, but couldn't pull it off. Unlike Mike's Maze in Sunderland, Mass., the Hicks' maze isn't known for an elaborate display. The family doesn't spend too much time laboring over planning this aspect of the labyrinth, though it does begin plotting in early May.

"We'll just be sitting around and fooling around on a piece of paper," Hicks said.

The construction of the maze begins around the Fourth of July and is truly a family operation. About 10 days before the Fourth, Bob MacLean, (the husband of Hicks' sister, Joanne), plows the land. Then, Hicks plants the dent corn, which is eventually fed to cows. This is late for planting corn, but Hicks wants to make sure the stalks remain green for as long as possible during maze season. Joanne MacLean begins carving the path using a tractor with a drag behind it on or close to the Fourth. The plants are just two to four inches high at that time.

Joanne MacLean is also in charge of clearing the paths with a hoe and creating the different decorations that accompany the soaring stalks. Her husband, Bob MacLean, runs a food and beverage truck next to a petting zoo and mini golf area on the site.

For those who want a scarier maze experience, the farm hosts haunted nights on Friday and Saturday nights in October that involve taking a different route. Groups of 15 to 20 must navigate narrow, unkempt paths filled with spooky surprises and disorienting doors, armed only with flashlights. How long does it take?

"How fast can you run?" Tammy Hicks said while showing off the space in the comfort of daylight.