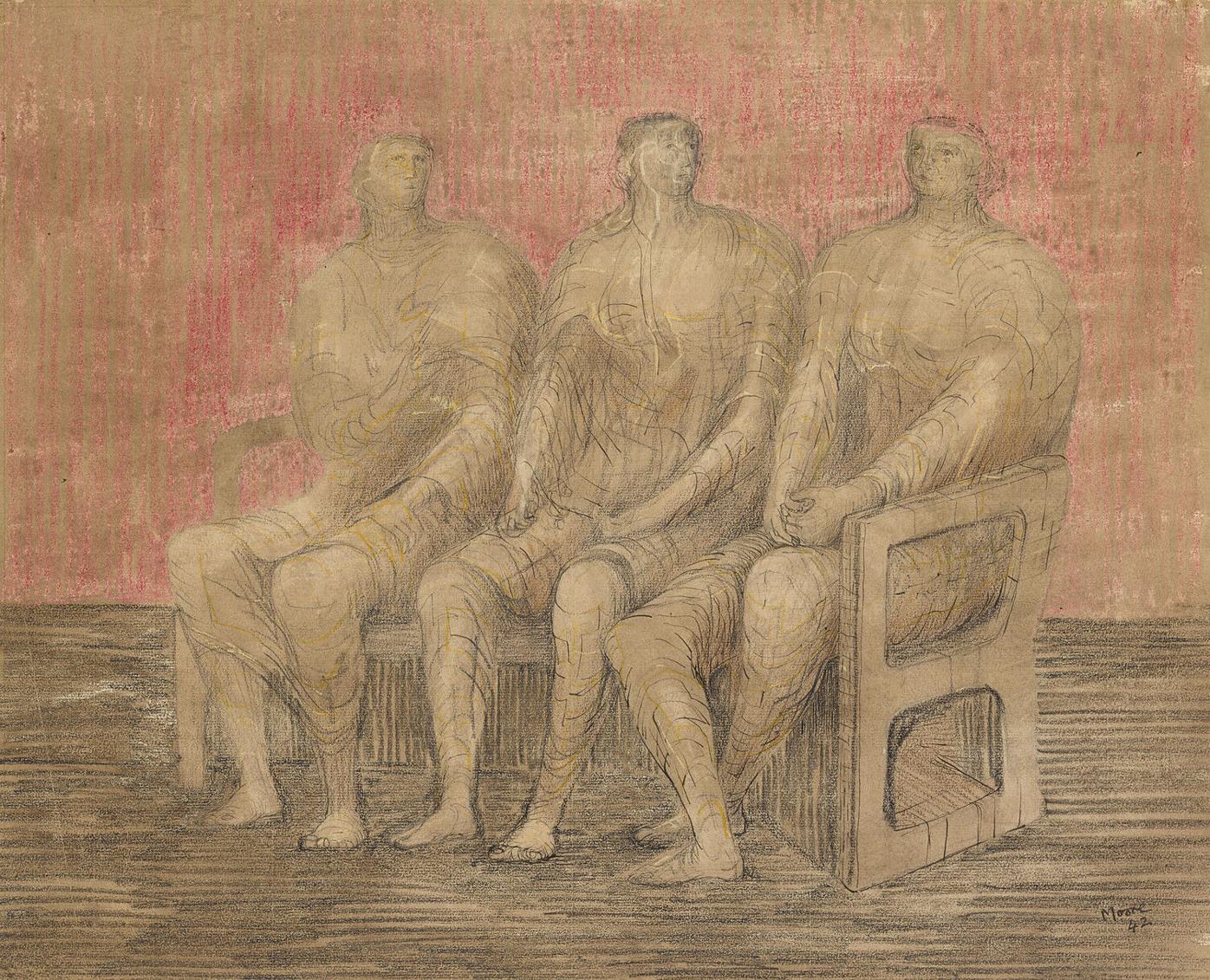 "Three Seated Women" by Henry Moore is among the two Berkshire Museum works expected to be sold at auction Monday. It is estimated to fetch between $400,000 and $600,000. 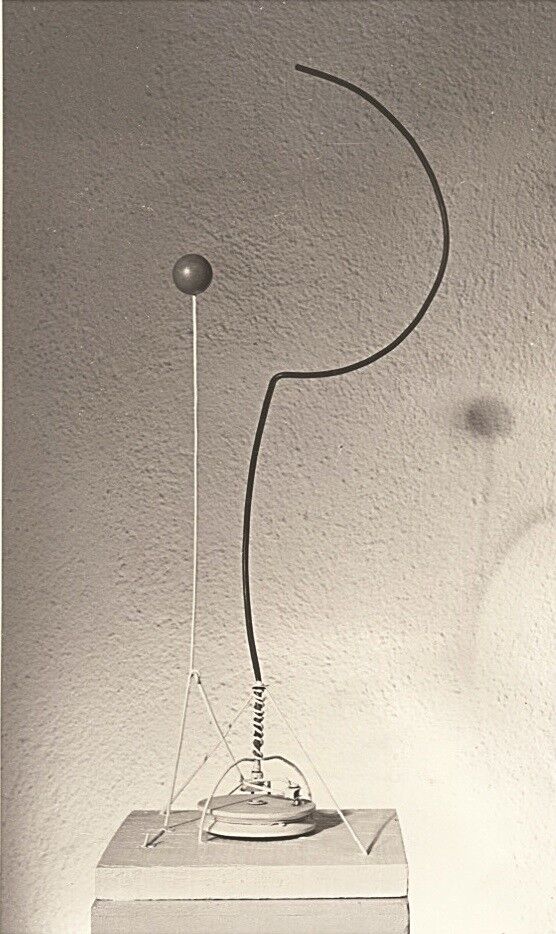 Double Arc and Sphere by Alexander Calder was one of two early works purchased by the Berkshire Museum in 1933. It could go for as much $3 million at auction on Wednesday. 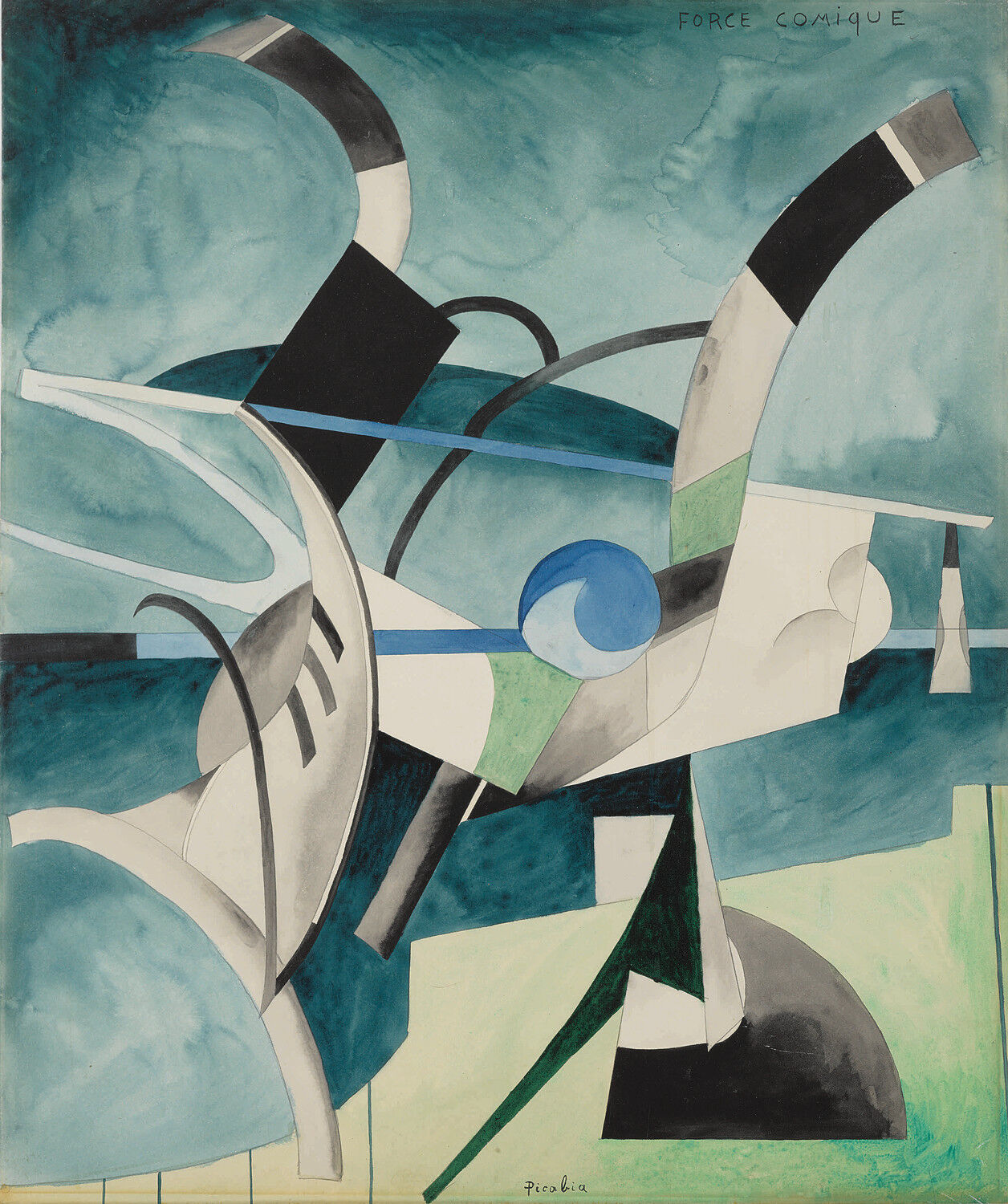 "Force Comique" by Francis Picabia, is among the two Berkshire Museum works expected to be sold at auction Monday. Its estimated auction price is from $800,000 to $1.2 million.

"Three Seated Women" by Henry Moore is among the two Berkshire Museum works expected to be sold at auction Monday. It is estimated to fetch between $400,000 and $600,000.

Double Arc and Sphere by Alexander Calder was one of two early works purchased by the Berkshire Museum in 1933. It could go for as much $3 million at auction on Wednesday.

"Force Comique" by Francis Picabia, is among the two Berkshire Museum works expected to be sold at auction Monday. Its estimated auction price is from $800,000 to $1.2 million.

Editor's note: This article was updated on May 18, 2018, to correct that Josephine Boardman Crane, the widow of W. Murray Crane, purchased Henry Moore's "Three Seated Women." Information provided in the Sotheby's catalog incorrectly identified her husband, brother of museum founder Zenas Crane, as having purchased it.

Art collectors and enthusiasts around the world will turn their attention to Sotheby's Impressionist & Modern Art Evening Sale on Monday for the much-anticipated sale of Amedeo Modigliani's "Nu couche," which is expected to sell for $150 million.

But in the Berkshires, attention will be paid to this auction for a pair of other reasons.

Two works from the Berkshire Museum, Henry Moore's "Three Seated Women" and Francis Picabia's "Force Comique," are among the 42 items scheduled for the auction. The Berkshire's pieces are the first of 13 works that will be sold at four auctions over the next two weeks at Sotheby's in New York City. The sale of Alexander Calder's "Double Arc and Sphere" will follow on Wednesday.

The auctions follow months of legal wrangling over the museum's plan to sell works from its collection and use the proceeds to build an endowment to ensure financial stability and to pursue building renovations related to its "New Vision" project to emphasize multimedia and interactive exhibits focusing on science and natural history.

The state Supreme Judicial Court in April ruled in favor of an agreement between the museum and Attorney General's Office allowing the sale under agreed upon conditions.

Although the Moore and Picabia works in Monday's auction are not expected to bring anywhere near the anticipated $7 million to $10 million estimated auction price of "Blacksmith's Boy," the two are from significant points in each artist's life and were donated to the museum by members of the community.

Created by Moore in 1942, "Three Seated Women" was originally created as a sketch for a stone sculpture that never came to fruition. The figures, seated on a bench with their feet firmly on the ground (a trademark of Moore's) against a muted background, would later appear in a life-size stone sculpture of three women who are standing.

According to the description of the painting in the Sotheby's catalog, the work — wax crayon, pencil, charcoal, wash and pen and ink on paper — was created during a time of Moore's "greatest and most publicly recognized achievements."

What distinguishes the work, the catalog states, is its early provenance. Its first owner was famed New York City gallerist Curt Valentin, who would represent some of the most important modern artists, including Moore and Calder. From there, the work made its way to the Berkshires, being sold to the widow of Winthrop Murray Crane, brother of Berkshire Museum founder Zenas Crane. Known as W. Murray Crane, he served as both governor and U.S. Senator for the state. His widow, Josephine Boardman Crane, was a founder of the Museum of Modern Art

"Three Seated Women" eventually was passed to their daughter, poet Louise Crane, and donated to the museum by the Louise Crane Conservatorship in 1991. The work is estimated to sell between $400,000 and $600,000.

Picabia's "Force Comique" is one of four water colors the artist created in 1914 and was sent to an exhibition in Amsterdam in May of that year. The paintings were the first he created, according to the catalog, upon his return to France from New York. Picabia was the only French avant garde artist who could afford to travel to New York City for the now famous Armory Show of 1913.

The artist acted as a spokesman for the French artists in the show and his paintings were enthusiastically received by other exhibitions and galleries. For art collectors and historians, "Force Comique" is representative of the period in which Picabia began to shed his "purist abstract concerns" and move toward the Dadaist form for which he is known.

The work was acquired from the artist in 1914 by Guillaume Apollinaire. It was purchased by the Hotel Druout in Paris in 1926 as part of a larger lot of items and was acquired later that year by Mrs. John Nichols. She donated the watercolor to the museum in 1965. It is expected to sell for between $800,000 and $1.2 million.

Similarly, "Double Arc and Sphere" is from an important moment in the career of Calder, a part-time resident of Richmond and a third-generation sculptor.

"From a pivotal early moment in the artist's celebrated sculptural practice, 'Double Arc and Sphere' is a definitive testament, not only to Alexander Calder's technical skill, imaginative genius and talent for dynamic formal compositions, but also his ability to breathe life into that which was previously inanimate," states a description of the work in the Sotheby's catalog for the Contemporary Art Evening Auction.

According to the catalog, the work is "A historic exemplar of the artist's career-defining output of the early 1930s, the present work is one of a limited group of motorized sculptures the artist produced in these transformative years; the earliest iterations of Calder's career-long investigation of the modernist canon within three-dimensional space, it was these intricately mechanized constructions that first prompted Duchamp to describe Calder's sculptures as 'mobiles.'"

But its significance in the Berkshires is directly tied to the museum and its first director Laura Bragg, who not only oversaw the purchase of two Calder works in 1933, but also included the artist in a show of emerging artists at the museum, which included the work of a young George L.K. Morris of Lenox.

Bragg would be one of the first American museum director's to recognize the importance of Calder's works. And the two "mobiles" purchased by the museum in 1933, "Double Arc and Sphere" (also known as "The Arc and The Quadrant" ) and "Dancing Torpdedo Shape," are among the first, if not the first, works by Calder to be purchased by a museum. Executed with wood, wire, rod and paint, the piece is expected to fetch $2 million to $3 million.

Lucas Museum of Narrative Art officials announced the nonprofit had purchased "Shuffleton's" for an undisclosed sum. Auction estimates had placed the value of the painting at between $20 million and $30 million. Once combined nets sales of upcoming auctions and "Shuffleton's" reach the $55 million mark, the auctions will be curtailed and items returned to the Pittsfield museum.

The museum plans to use most of the money to bulk up its endowment and draw off earnings to counter what it says has been a recurring yearly deficit of more than $1 million. It will also tap proceeds to fund renovations to address problems with its 39 South St. building, and in pursuit of a new approach to exhibits that emphasizes multimedia and interactive presentations.

"We are hopeful that the sale of these other 13 works will allow us to hold the remaining works that had been approved for deaccession," Elizabeth McGraw, the trustees' president, said in a statement in April, which named the 13 works to be sold this month. The 26 remaining items include Albert Bierstadt's "Giant Redwood Trees of California," Calder's "Dancing Torpedo Shape" and Thomas Moran's "The Last Arrow," would be retained.

Whether or not that goal is still attainable is uncertain. Emails and calls to Carol Bosco Baumann, a spokeswoman for the museum, were not returned this week.

While the sale of "Nu couche" will draw the most attention at Monday's auction, the two paintings hailing from the Berkshires will not go quietly.

Save the Art — Save the Museum members, a local group opposed to the sale of the Berkshire Museum artworks, will be outside the 1334 York Ave. auction house from 5:45 to 7 p.m. for a permitted protest.

"Our presence outside the auction house is intended to bring attention to unethical deaccession practices and discourage other institutions from following this course of action," said Hope Davis, a spokeswoman for Save the Art, in a phone interview on Thursday. "Current law does not adequately protect these publicly held collections from a not-for-profit's temptation to monetize works held in the public trust."

The group chose to protest at the Monday night auction because it kicks off the sale of the 13 works. The group may hold another protest on May 23 because the Berkshire Museum artwork in the American Art auction is of great significance, she said.

"It's difficult to know what will happen with the Berkshire Museum works, as there will be many European buyers who are not aware of the controversy," said Davis, an art appraiser by trade.

But, she said, there is a possibility the controversy surrounding the sale and negative publicity could lower the overall sales of the items and keep some potential buyers away. She pointed to the below expectations sales figures from the April auction of works from the La Salle University Art Museum. The auction, held by Christie's Auction house in New York City, failed to sell seven works and those that did sell did so with little fanfare. The sale met similar resistance from La Salle students, faculty and alumni.

Save the Art considered the fact that its continued protest of the sales could negatively impact the funds generated by the scheduled auctions, she said. Should the auctions fail to raise the rest of the need funds to reach the museum's goal of $55 million, a second set of works could be sent to the auction block.

"That very well may happen," Davis said. "For us, this is about the larger message, about what kind of impact this kind of sale will have on future museums. ... We did think about that. We are a very thoughtful group. It's not about deflating the prices. It's about the larger issue of ethical practices."