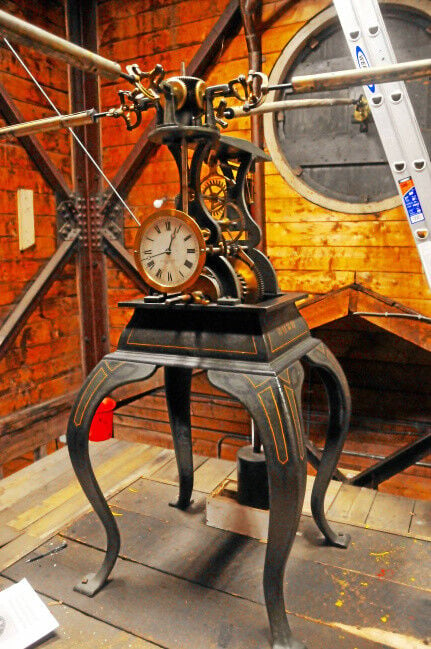 The parishioners of the First Congregational Church in Williamstown are celebrating its 250th anniversary this Sunday. This steeple clock has been running the four clocks on each side of the steeple for more than 100 years. 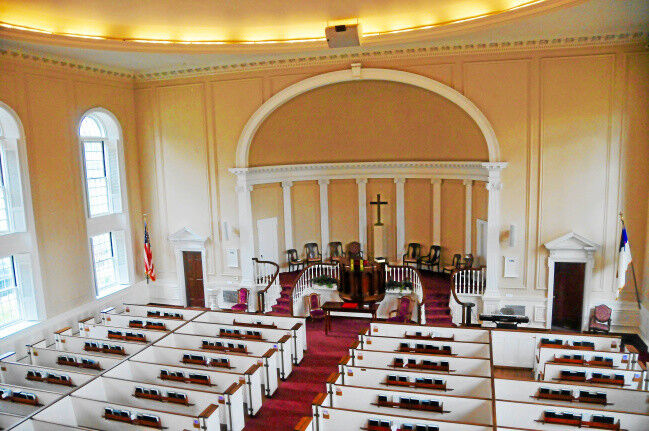 The First Congregational Church in Williamstown, which currently seats 350 people. On Sunday parishioners will fill the seats to celebrate the church's 250th anniversary. 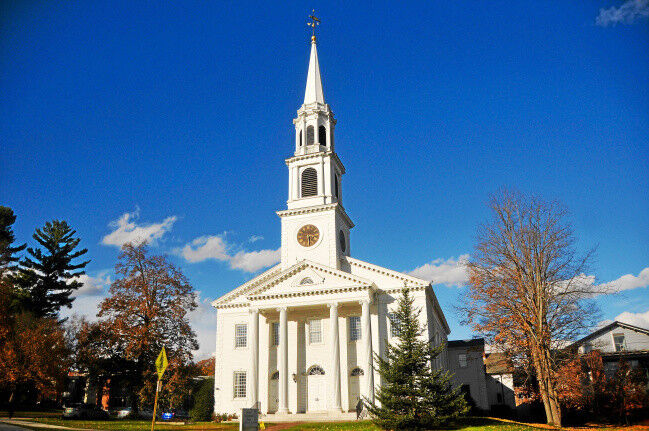 The parishioners of the First Congregational Church in Williamstown are celebrating its 250th anniversary this Sunday. It was first built in 1765 and served as the town's meeting house and space for commencement for Williams College.

The parishioners of the First Congregational Church in Williamstown are celebrating its 250th anniversary this Sunday. This steeple clock has been running the four clocks on each side of the steeple for more than 100 years.

The First Congregational Church in Williamstown, which currently seats 350 people. On Sunday parishioners will fill the seats to celebrate the church's 250th anniversary.

The parishioners of the First Congregational Church in Williamstown are celebrating its 250th anniversary this Sunday. It was first built in 1765 and served as the town's meeting house and space for commencement for Williams College.

WILLIAMSTOWN — After 250 years, the First Congregational Church may be the most iconic of the architecturally rich Main Street corridor through the Williams College campus.

That wasn't always the case. When first built in 1765, the church was a simple, small wooden affair located on town land in Field Park. In addition to church activities, it also served as the young town's meeting house and hosted commencement ceremonies for Williams College at the time.

On Sunday, the congregation is celebrating its 250th anniversary with a special service, followed by a luncheon.

According to Moira Jones, church moderator, before the town could be incorporated, there had to be a full-time pastor.

After seeking a pastor for some time, the community was able to bring in the Rev. Whitman Welch of Yale in 1765, allowing the town to be officially named according to the will of Ephraim Williams Jr., who was killed in 1755 near Lake George during the French and Indian War. His will set forth the establishment of Williams College and the name of the town as Williamstown.

In 1798, the original church was moved aside and used as a schoolhouse while the second church was built on the original spot. But in 1866, shortly after a centennial celebration, the church burned down when a stove pipe overheated. The insurance had lapsed the day before.

According to an article from the North Adams Transcript at the time, "The Congregational meeting house in [Williamstown], built in 1798, and thoroughly refitted in 1861, in which the college commencements have been held for almost 70 years, was totally destroyed by fire Sunday afternoon. Loss $20,000. The fire caught from an overheated stove pipe. A policy for $2,000 has just expired, and was to have been renewed the next day. This is a severe loss, but the people are not cast down."

The townsfolk quickly raised the $5,000 needed for a new brick church building. And since Williams College still needed the space for commencement, the school donated $7,000 to help the church build a structure large enough to seat 900.

By then, the church was no longer part of the town operations, and the congregation was asked to relocate off of town property. So in 1867 the parishioners bought the land on which it now sits, which required the relocation of a store to a spot on Spring Street. A new church was built of brick in 1869, with two towering steeples.

In 1914, wanting to remain consistent with the Georgian architecture of much of the college's nearby buildings, First Congregational had the two steeples removed, wooden siding applied over the brick and a new, soaring steeple erected over the center of the church. It was painted white and then appeared largely the same as it does today.

Since the college had recently moved its commencement ceremony into a college-owned building, they didn't need quite so much seating in the sanctuary, so the interior space was reconfigured.

The iconic steeple was erected and designed to house a clock on each of its four sides, with a modern 1914 mechanical clock installed inside the steeple to move the hands of the four exterior clocks.

The clock workings are still there, Jones said, and still keep accurate time, with the help of a church member who weekly climbs two flights of stairs and two ladders to get into the steeple and wind the clock.

The celebration Sunday includes a 10 a.m. worship service to which former pastors and clergy from other area churches have been invited, Jones said.

The Rev. Mark Longhurst, pastor at First Congregational for two years, will preach on the theme of past and future and Minister of Music Edwin Lawrence will provide special music.

Longhurst said some churches lean too much on their history, which can become a hindrance in moving into changing times. So this celebration is also about embracing the church's future, he said.

"I think history can be either be an impediment to vision or something to build upon while embracing the changes that need to be made in this period of transition," Longhurst said. "The past can also serve as an inspiration for the future."

Along with a slide show, former pastors and community partners will be recognized at a luncheon, which will honor the past with a traditional turkey and foods from lands where the church's missionaries have worked.

For local history buffs, at 11 a.m. on Saturday, Nov. 14, Jones will speak on the church's 250 years at the Williamstown Historical Museum.

On its website, First Congregational Church is described as progressive Christian community that focuses on social and environmental issues while seeking spiritual experience through small group participation. The mission of the congregation is to "try, with the help of God, to lead a life of Christian love and service to God, humanity, and all creation."