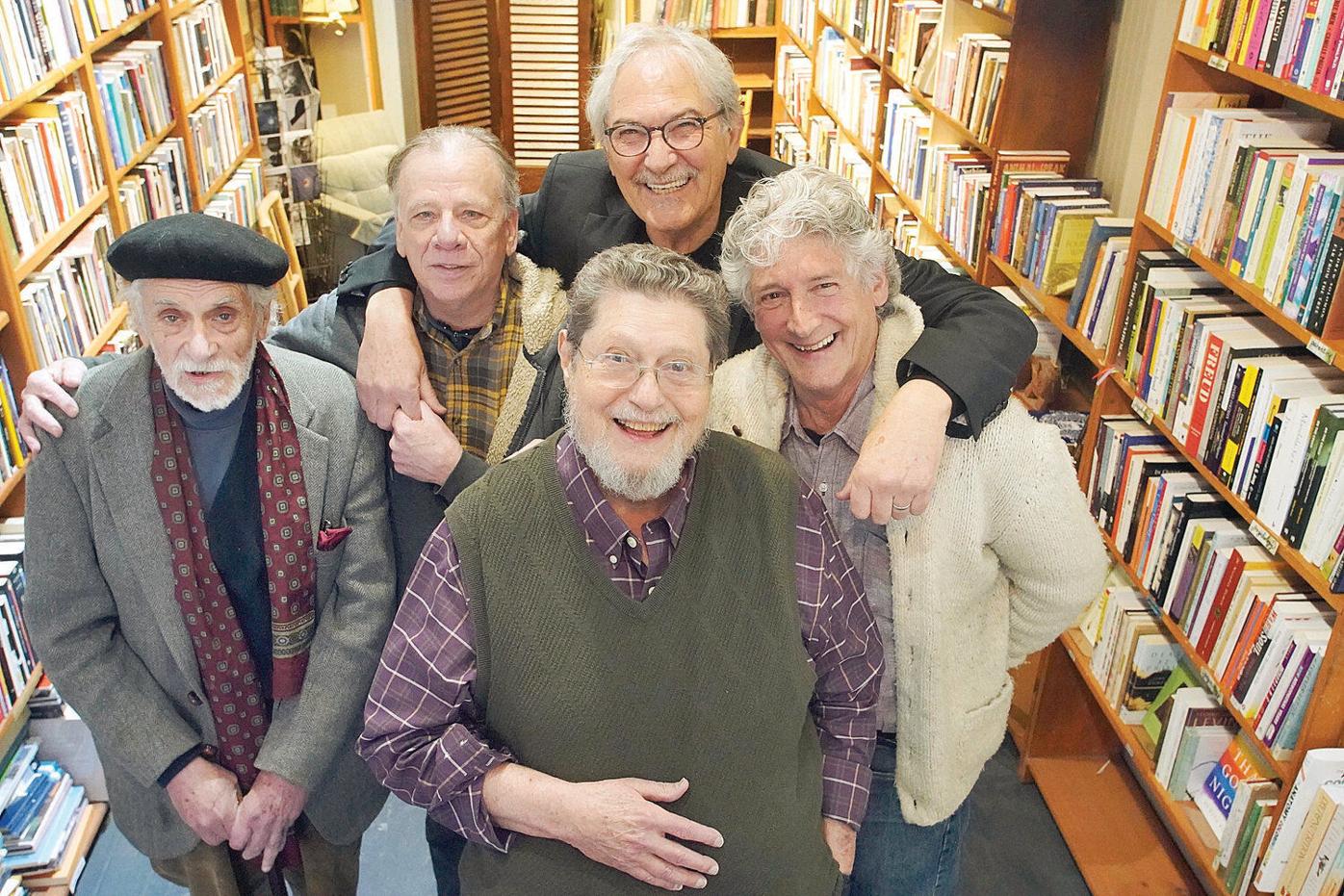 Daniel Klein, Jeff Kent, Bob Lohbauer (front), Sam Bittman and Matthew Tannenbaum make up The Third Act Project, which "encourages older men everywhere to be the spirited protagonist in their own stories until the final curtain." The project produces a comedy show called "Five Wise Guys." 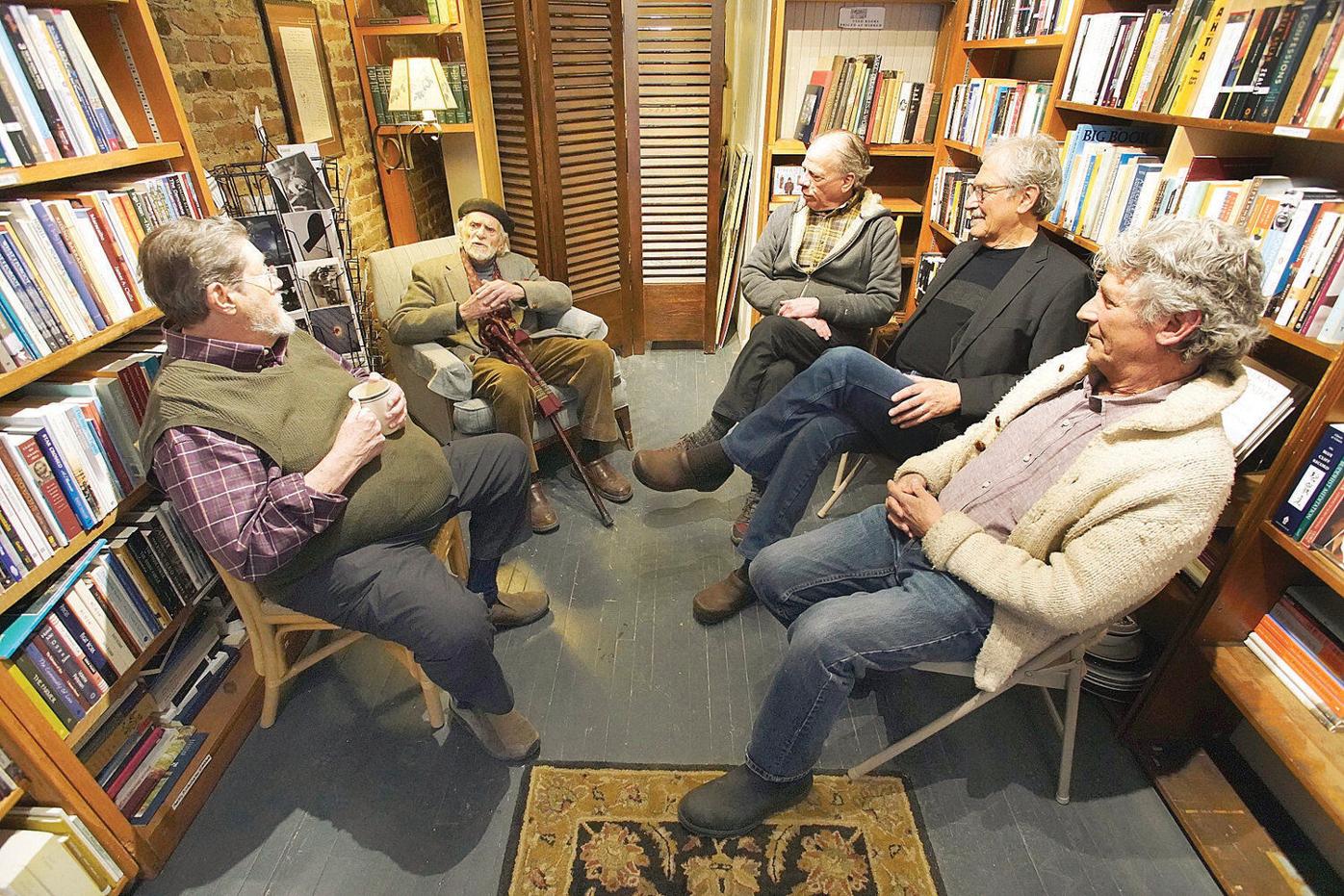 Sam Bittman helped launch Third Act Project's website in 2016, asking the other men to join him as the project developed.

Daniel Klein, Jeff Kent, Bob Lohbauer (front), Sam Bittman and Matthew Tannenbaum make up The Third Act Project, which "encourages older men everywhere to be the spirited protagonist in their own stories until the final curtain." The project produces a comedy show called "Five Wise Guys."

Sam Bittman helped launch Third Act Project's website in 2016, asking the other men to join him as the project developed.

Two men are sitting across from each other, making their way through a crossword puzzle, when one of them reveals this troubling news. He has alluded to his condition earlier, mentioning a CAT scan, but his friend ignored him then, asking about an eight-letter word starting with an "f" instead. Now, his companion can't deny his confession any longer.

"So, they cut it out, right?" the friend responds.

No, it's too late, he explains. "They'd have to take out half my brain."

"So, they take out half your brain, big deal," the friend says, barely missing a beat. "I've gone through my life with half a brain. I've managed."

The ensuing laughter is common to "Five Wise Guys," a Berkshire-based video series that takes a simultaneously light and poignant approach to the heavy realities of later life. Airing on Community Television for the Southern Berkshires, the Third Act Project-produced show's second season started in October with Daniel Klein's filmed short play, "A Five-Letter Word Beginning with a 'W,'" which features Jeff Kent of Richmond and Bob Lohbauer of Lee playing the aforementioned friends coming to terms with a difficult diagnosis. While Klein's scripts have guided the series' sophomore season, conversations among Third Act Project co-founder Sam Bittman, Kent, Lohbauer, Klein and The Bookstore in Lenox's Matthew Tannenbaum were at the core of the series' first season, which is available on thirdactproject.com with the newer shows. Like the characters in Klein's works, the men crack jokes but don't avoid articulating their feelings about their health, sexuality and imminent mortality, among other typically taboo topics.

"We get into areas where most men find humor to deflect, or to keep away, or to hide their feelings. We get into those areas, and we're liable to open up more," Lohbauer said on Monday at The Bookstore.

The Five Wise Guys had gathered at the Lenox institution for an interview and a celebration of Lohbauer's 85th birthday. Hugs were aplenty. Klein brought a cake.

"My goal is to get older men to form discussion groups like this," Bittman said.

The Cheshire resident helped launch Third Act Project's website in 2016. The site hosts content by and about men of an advanced age, including a music podcast, Words & Music, a poetry podcast, Poems for the Third Act, and a variety of stories that exemplify the community's motto, "Don't Die Till You're Dead."

"The third act of a play, and of life, features the climax and resolution of a story and [its] subplots, leaving the protagonist and other characters with a new sense of who they are," the site explains. "Third Act Project encourages older men everywhere to be the spirited protagonist in their own stories until the final curtain."

In his early 60s, the now 76-year-old Bittman started meeting with a group of men to talk about tough subjects related to male aging. The experience was so rewarding that Bittman, whose father's preoccupation with death instilled the same obsession in his son from an early age, sought to bring this community to the digital sphere. He felt like he was filling a gap.

"There [was] something about my experience with talking with older guys who just don't feel like it's a kosher thing to do," Bittman said.

The Third Act Project was thus formed. Five Wise Guys joined the site in April 2017. Bittman, Kent and Tannenbaum had been taking an acting class and getting dinner together, during which time they would discuss many of the matters now explored on the show. When Bittman asked his friends how much they would be willing to share on camera, they each said about 90%, according to Bittman. Pleased, he then inquired about adding two other talkative types to join them. Klein and Lohbauer soon agreed.

"We're the senior members," the 79-year-old Klein said while sitting in a semicircle with the rest of the group.

It had been a struggle to get all five storytellers in the same room. One of them is always in the bathroom, they quipped. Later on, the pee jokes got a bit more graphic.

"I've got nothing to hide anymore," Klein said at one point, speaking broadly about his openness on the show.

"What, I'm going to get a bad reputation?" Klein continued. "I'm not running for president."

Still, they must overcome a stigma against oversharing.

Klein feels that this liberation is more common in other cultures. The Great Barrington author has published, among other titles, a handful of novels and "Travels with Epicurus," a book about his time on the Greek island, Hydra. He saw older men coming together to speak openly about their experiences in Greece.

"It's often in like a taverna or a cafe, and they sit around for hours," Klein said.

In the U.S., such meetings aren't unheard of, the group agreed, but they perhaps aren't as frequent.

"I think in our culture, men tend to be much more withdrawn and isolated. I think that the guys we idolize, our screen idols, were tough guys — John Wayne or John Garfield," Bittman said.

"I thought you were going to say the guys we admire are the writers like Carl Reiner and Mel Brooks. They're the ones who poke fun at all of that, and in those ways, that's what we do," the 72-year-old said. "We make a lot of fun, and we get intimate in that way."

For instance, the group's latest episode, "Melancholy Baby," mocks their ability to win the affection of a beautiful woman. Libido comes up a lot, actually, but there are limits to their candor; they won't embarrass others in their lives.

The 69-year-old moved a lot during his youth because his father was in retail. To build a community in each place, he turned to theater.

"Every year, almost, I had to make new friends," he said. "I wasn't allowed to be shy."

While the characters in Nelson's plays are fictional, he bases them on his comrades.

"That's why I get very few lines," Kent quipped, describing Klein as a "wonderful" playwright.

In addition to Klein's writing, a certain spontaneity from the group's on-camera discussions has helped propel the series forward.

"From the beginning, it was always very improvisational," Bittman said of the group's early episodes. "We might begin a show by saying, 'I'd like to talk about such and such,' but that was as scripted as we got. There's something about the rules of improv, [which] require that you be present and all in, and saying 'yes and,' and taking everybody's premise and moving forward."

"We're sounding boards for each other," Kent said. "If we have questions or worries or whatever, there's no problem spilling that out."

The group is currently raising money for the show. With Michael Sinopoli's production help, two more episodes have already been filmed, and two more will finish the season. Visits and presentations at community and assisted living centers are also on the horizon. All in all, "Five Wise Guys" has been a welcome addition to what Bittman calls their "third act."

"How do we use the last part of our life, when we are forced to look at certain realities, and write a script for ourselves?" Bittman said of the theatrical reference.

After the remark, Kent wanted some reassurance.

"And the script doesn't have to be locked in, right?" he said.

No," Bittman replied. "In fact, the script is all about uncertainty. But it's about doing s---, nonetheless."