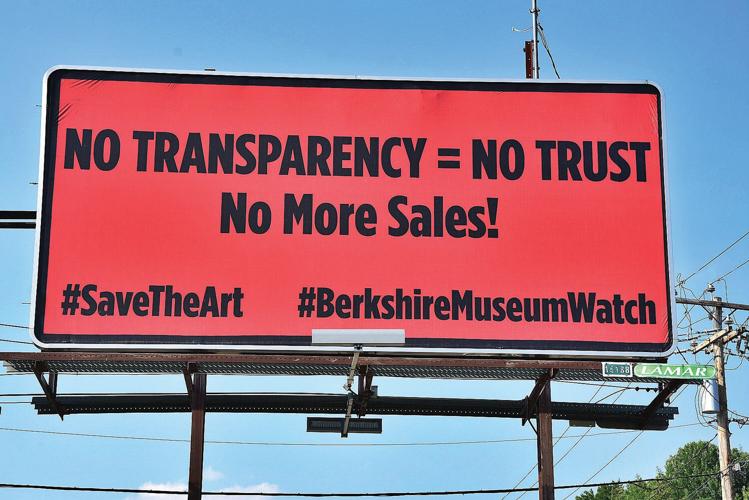 This billboard along South Street in Pittsfield is visible near Guido's as motorists drive north. 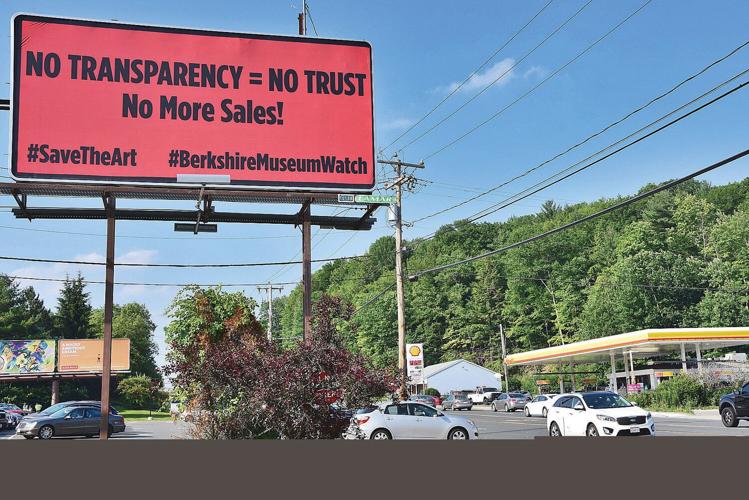 This billboard along South Street in Pittsfield is visible near Guido's as motorists drive north. Monday, July 2, 2018.

This billboard along South Street in Pittsfield is visible near Guido's as motorists drive north.

This billboard along South Street in Pittsfield is visible near Guido's as motorists drive north. Monday, July 2, 2018.

PITTSFIELD — Roadside billboards normally encourage sales. Not the one that went up Monday on Route 7 in Pittsfield, a stone's throw from the Lenox line.

"No More Sales!" reads black text on a red sign, under this full-width statement: "NO TRANSPARENCY = NO TRUST."

Puzzled travelers have to read down to two Twitter hashtags at the bottom to get the full picture: #savetheart and #BerkshireMuseumWatch.

The sign is the work of Save the Art-Save the Museum, a citizens group that formed after museum trustees announced last July they would sell up to 40 works of art and use proceeds both to bolster the institution's endowment and to make repairs and renovations to their 39 South St. building in Pittsfield.

The museum sold more than a dozen works in private sales and auctions in April and May, including two paintings by Norman Rockwell, netting $47 million in proceeds.

On June 25, the museum said it will solicit buyers for another nine works from its collection, as it seeks an additional $8 million in proceeds. If successful, it would take in the full $55 million the Supreme Judicial Court for Suffolk County says it can raise, after the museum went hand-in-hand with Attorney General Maura Healey seeking permission from the Boston court in February.

Hope Davis, a member of Save the Art, said the group has been pressing for answers about the sales and urging the museum to preserve its collection. She said members decided to invest roughly $2,000 to keep the billboard up through July.

"We have no more transparency despite the promise of it," she said of the group's contact with museum leaders. "That extra $8 million? What is that going to do? I think the community deserves answers."

A spokeswoman for the museum defended the institution and cited steps its leaders have taken to build trust.

"The museum leadership and board have consulted hundreds of people in our community and continue reaching out as we move forward," Carol Bosco Baumann said in a statement, in response to questions about the billboard.

"We've continued to share information through months of legal action and beyond," she said.

The billboard is visible to north-bound travelers on the west side of Route 7.

It joins messages in two groups of billboards that typically advertise the region's top museums.

The Clark Art Institute uses space on an adjoining billboard to promote a current exhibition called "The Age of Iron." On the other side of the Guido's Fresh Marketplace parking lot, another billboard refers to Mass MoCA as "A wildly ambitious dream."

The past year has more resembled a nightmare, as far as the Berkshire Museum and its critics are concerned. Trustees and staff of the museum fought off two lawsuits and a monthslong investigation by Healey's office. That probe ended in early February with an accord approved April 5 by the SJC.

Members of Save the Art called unsuccessfully in months of street protests, rallies, private meetings, op-eds and letters to the editor for the museum to alter its course.

Today, that appeal is to drop plans for further sales.

Of the nine works listed last week, seven will be sold in private transactions, the museum said, in an attempt to place them with owners willing to keep them in the public realm. Two other pieces will be offered for sale at an Asia Week auction in September at Sotheby's in New York City.

All are from the original list of works the museum's collections committee agreed on July 11, 2017, to remove, in the process known as deaccession.

While not uncommon in museum practice, this deaccession became international news because trustees planned to apply proceeds to operational costs, a use viewed as unethical in the profession.

Sale opponents, including the leader of the Massachusetts Cultural Council, called it a dangerous precedent that could lead to widespread art sales from public collections. Nonetheless, the museum won its effort to break that ethical logjam, adopting a position articulated by Pittsfield attorney Mark S. Gold and by Van Shields, who served as the museum's executive director from September 2011 until his retirement last week.

The billboard's references to "transparency" and "trust" borrow words museum trustees used in a May 31 open letter.

In that 1,200-word message, posted on the museum's website, trustees conceded that community trust had been strained by what they termed "a bitter debate" over art sales — and called for a fresh start.

"We are committed to doing so, transparently, cooperatively, and thoughtfully, to regain public trust and confidence where it has been lost," the open letter said.

On Monday, Bosco Baumann added that leaders believe people who care about the museum need to "move forward together."

"We believe it is time to move beyond what has been a contentious and sometimes bitter debate to truly take up the critical work of securing the future of the Berkshire Museum," she said.

Members of Save the Art have said they hoped that after promised new outreach into the community, trustees might relent from further sales.

"In light of the Museum's recent call for healing and promises of transparency, it is distressing that they have chosen to sell the most important of the remaining art," the group said June 25.

"This reflects the Board's disregard of a substantial segment of the community who respect the integrity of the Museum's original mission — the study of art, natural sciences and the culture of mankind. This is clearly a violation of the public trust."

Davis said Monday the billboard space became available unexpectedly. She said it is a coincidence the message, designed by the group itself, is grouped near those of other area museums.

"Our hope is to make an impact on the wider community," she said, reaching visitors as well as those who have followed the story over the past year. "Certainly at the height of the tourism season. We're looking for maximal impact."