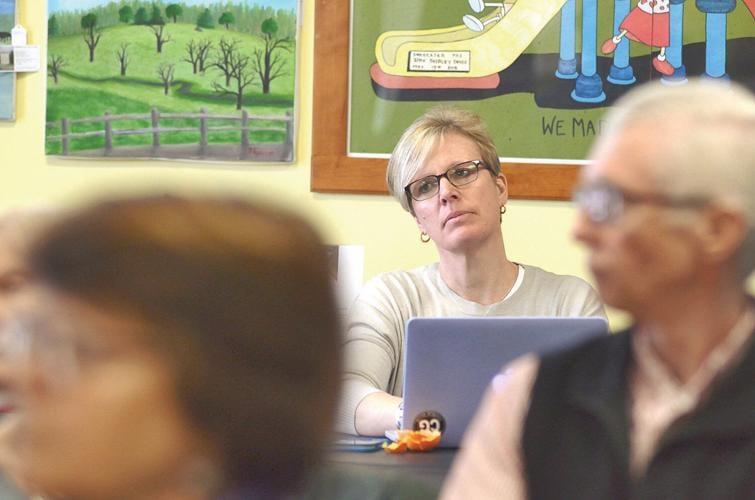 Organizer Jessica Dils takes notes Sunday as she listens to District Attorney Andrea Harrington speak during a Greylock Together meeting. 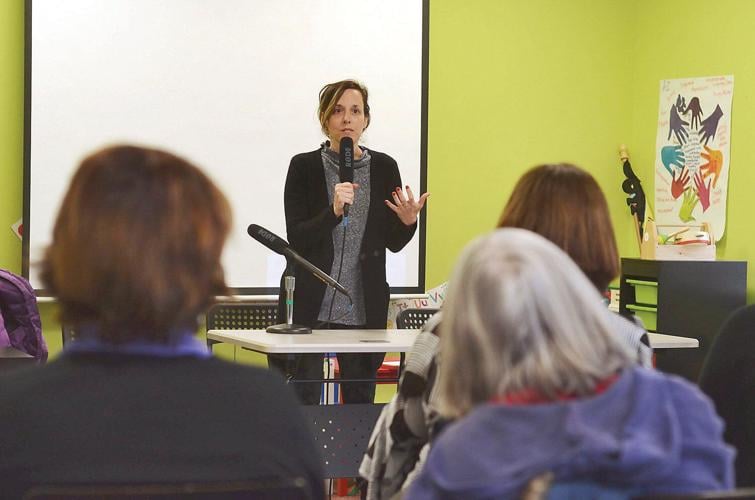 Berkshire County District Attorney Andrea Harrington shares her thoughts Sunday with members of Greylock Together during a meeting. 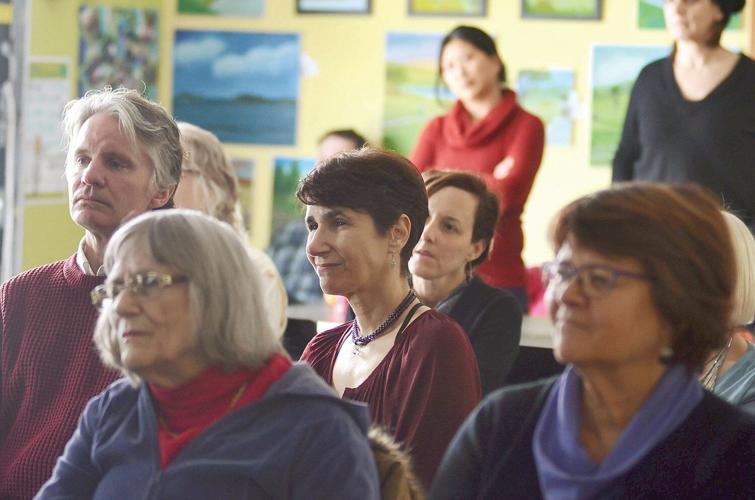 Members of Greylock Together, including Wendy Penner, center, listen Sunday to District Attorney Andrea Harrington speak during a meeting.

Organizer Jessica Dils takes notes Sunday as she listens to District Attorney Andrea Harrington speak during a Greylock Together meeting.

Berkshire County District Attorney Andrea Harrington shares her thoughts Sunday with members of Greylock Together during a meeting.

Members of Greylock Together, including Wendy Penner, center, listen Sunday to District Attorney Andrea Harrington speak during a meeting.

WILLIAMSTOWN — After the 2016 election that sent Donald Trump to the White House, Jessica Dils was shaken and took to social media seeking comfort in other shell-shocked voters.

Dils, of Williamstown, posted that she'd be getting coffee at a nearby cafe, and if anyone wanted to share in her commiserations, they'd be welcome.

She expected a handful of friends. Instead, what she got was a group of 75 people who were also disconsolate, seeking out progressive fellowship and a path forward.

"We were so horrified after the election," Dils recalls. "Clearly we had to do something."

After several weeks, more people joined the growing local movement, and many of them attended the Women's March in Washington, the day after Trump's inauguration. Soon, the core group was meeting every two weeks, setting up action plans and listing the issues on which to focus their efforts.

This diverse crowd of individual voters coalesced quickly into Greylock Together, a group that is now a savvy crowd of battle-hardened resistance veterans digging in to find new and better ways to shift the course of public policy to a more progressive direction.

On Sunday, Greylock Together hosted a group of speakers at the UNO neighborhood center in North Adams that included high school students from Mount Greylock Regional School who are leading a climate justice movement. They were followed by Berkshire District Attorney Andrea Harrington, who stopped by to talk about bail reform and systemic discrimination in the judicial system.

This was just one meeting of many that have been happening twice monthly since early 2017 to help keep the focus and energy on issues members of Greylock Together agree must be addressed.

"After Trump was elected, I was desperate for community and connection — some sort of light in the days of darkness that followed the election," said Wendy Penner, director of prevention and wellness at Northern Berkshire Community Coalition and resident of Williamstown. "I was fortunate to find this hopeful, positive group of community members who are energized and forward-looking."

She was not only relieved to find a group of like-minded individuals, but excited to see that this was a group that insisted on active resistance which included protests, outreach, trainings in activism and sessions with lawmakers — things that can help to steer public policy toward the progressive agenda.

"Anything that can keep people empowered," Penner said. "I think it's become a catalyst. We continually keep coming together to identify new ways to keep our elected officials accountable. It's not just a bunch of snowflakes trying to make each other feel better."

Today, Greylock Together boasts more than 600 members and is able to mobilize more than 100 activists within 24 hours if need be.

One of the longer-term members, Shira Lynn, has been engaging in activism for some time, but much of it had been of a limited, more individual basis, she said. She found Greylock Together in the weeks following the 2016 election after moving to the area.

"It's really nice to be in a community that is competent, well-informed and highly functioning," she said.

Lynn is fond of activism that gets right to the heart of the matter — caucusing door-to-door, testifying to legislative panels, forums with legislators, or as she puts it, "Working to actually change behaviors."

And her efforts at Greylock Together fit that bill.

"Within the realm of what's possible, [Greylock Together] is doing a pretty good job," Lynn said. "And the legislators hear us and know that we're here as partners, and we're here watching them and making sure they are being true to their constituency."

During last November's midterms, Greylock Together was moving on a wide variety of fronts. Many enlisted for door-to-door caucusing and phone banking for Harrington, Massachusetts' 1st Congressional District candidate Tahirah Amatul-Wadud, and U.S. Rep. Antonio Delgado, D-N.Y., who was then campaigning against incumbent John Faso.

On Election Day last November, an Eagle reporter stopped by an impromptu Spring Street phone bank in Williamstown hosted by Greylock Together, where volunteers were primarily calling residents to remind them to vote.

But they were also trying to bolster voter turnout in Florida, where voter suppression efforts had been attempting to do the opposite, according to volunteer Alexander Davis, a member of the Greylock Together steering committee and a high school teacher at Mount Greylock Regional School.

He said roughly 50 volunteers were manning the phone banks all day — each for three hour shifts. There was also a roster of drivers standing by to give folks rides to their polling station.

"On election day, the main goal is pretty much to get out the vote," Davis said at the time. "We're trying to do whatever we can in local efforts and give others a boost elsewhere if we can. The Republicans have built a sea wall of oppression and repression, but I think progressive enthusiasm will be enough to carry the day."

Later, in February, Davis said that is an example of the group's on-the-ground work that frequently takes place.

"We're trying to focus on practical things we can do," he said. "And by doing these things, as hard as the news is every day, you don't feel quite so hopeless."

Greylock Together also took part in standouts in Williamstown and Pittsfield after violence in Charlottesville, Va., the mass shooting in Las Vegas and for causes like Black Lives Matter, March for our Lives and the Green New Deal.

Other issues Greylock Together targets include preventing the Trump border wall, expanding civil rights for LGBTQ people and ending gerrymandering.

"We're sort of curators of horrors — which horror do we need to try to set straight today," said Dils, who is one of the organizers of Greylock Together and a member of the steering committee.

One tactic they employ regularly is to meet in an open dialogue with local lawmakers, like state Rep. John Barrett III, D-North Adams, and state Sen. Adams Hinds, D-Pittsfield. Members of the steering committee say their interactions with Barrett and Hinds have been educational and productive, and they appreciate the responsiveness of both.

"They are very interesting and thoughtful in their approach," Barrett told The Eagle. "I try to help them understand how to achieve their goals, how to navigate the mechanics of the political process. They are a group of people who want to act on their beliefs and make a difference. They've picked my brain, and I've picked theirs. I do enjoy our discussions."

Greylock Together is one of more than 6,000 progressive groups registered as an Indivisible Group nationwide. Aside from working the phones and standing out in protest, members of Greylock Together also share speaking engagements, such as the recent February event at Williamstown Youth Center in which scientist William Moomaw spoke about the race against time to save the planet from the effects of climate change.

There are rallies, social gatherings, marches, fundraisers and a variety of outreach programs. "We keep on discovering new ways to make a difference," said steering committee member Tracy Baker-White.

Greylock Together also supports other organizations, such as the Berkshire Immigrant Center, Elizabeth Freeman Center, Multicultural Bridge and the Massachusetts Bail Fund.

And it hasn't escaped anyone's attention that much of their work is supported by a majority of Americans.

"Americans, by and large, support universal background checks for purchasing guns, affordable health care for all and oppose the wall," Dils said, referring to a Trump's proposed wall on the southern border. "They support equality and justice."

And when they get down to discussing the issues, there is a healthy bit of debate and disagreement, but they eventually come to a consensus on what's best for the region and nation.

"There is so much yet to do," Davis said. "We never have a lack of tasks."