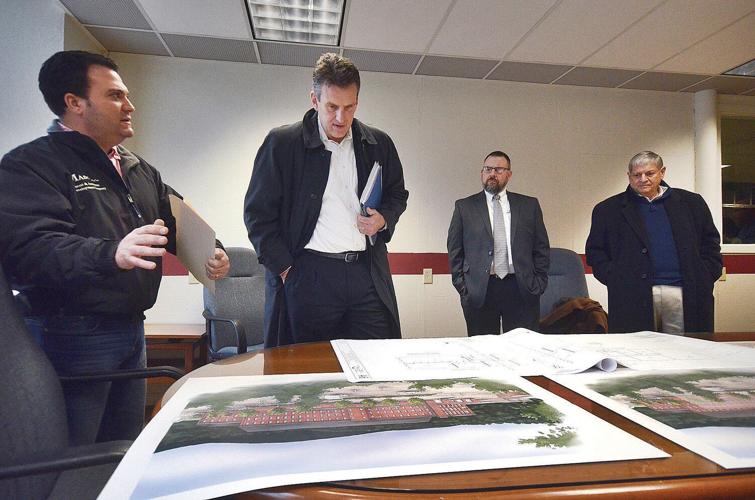 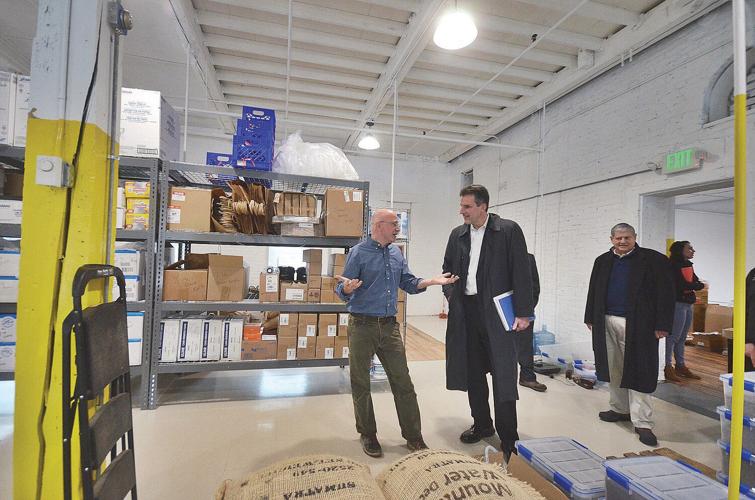 Massachusetts Secretary of Housing and Economic Development Jay Ash, right, talks with Paul Lovegreen, owner of Tunnel City Coffee, who rents space on the second floor of the NORAD Mill in North Adams.

Massachusetts Secretary of Housing and Economic Development Jay Ash, right, talks with Paul Lovegreen, owner of Tunnel City Coffee, who rents space on the second floor of the NORAD Mill in North Adams.

NORTH ADAMS — When David Moresi purchased the Excelsior Mill in 2017, he set out with a five-year redevelopment plan.

So much for that.

In less than a year, Moresi and Associates has signed 22 leases with businesses that have committed to 80 percent of the 100,000-square-foot historic 19th-century facility, which he has rebranded as the NORAD mill.

The tour concluded with the announcement of yet another new business.

Freia Yarns will be relocating to North Adams from California, bringing approximately 12 jobs when it is up and running.

"This is exiting, they're coming cross-country," Moresi said.

The company, which specializes in hand-dyed yarns, has international distribution and first connected with Moresi in 2017 and has signed a lease for a 4,000-square-foot space in the NORAD mill.

"She saw the potential here, she was ready for a life change, and she has a solid business," Moresi said of owner Tina Whitmore.

Freia is one of a slew of businesses — ranging from startups to well-established companies, some local, and some new to the area — to find a home in the NORAD mill since Moresi purchased it in May 2017.

Moresi Commercial Investments LLC purchased the mill from Crane Currency in Dalton for $47,500.

"They gave us a good deal on this because we are holding true to what we told them right from the start. We said our intent with this project was to bring businesses and jobs to the city," Moresi said.

Since the purchase, Moresi's company has focused on renovating the massive mill, one tenant space at a time, he said.

Cordmaster Engineering has been headquartered in the Hardman Industrial Park for decades, but a recent spike in business necessitated more space.

A day after Moresi closed on the purchase of the mill, Cordmaster signed the first lease.

The company uses the space to produce a linked system that keeps the center rail of an electrical railway heated and ice-free in the winter. One of several customers for such a product is the Massachusetts Bay Transportation Authority.

"When we moved over here, David came in and in 30 days — not even, 15 days — turned this entire space over for us and allowed us to say yes to a customer that we couldn't fit in our existing facility," explained Cordmaster owner Hugh Daley.

Upstairs, Tunnel City Coffee Roasters is using the mill for its coffee-roasting operations, as the business has grown from one cafe on Spring Street in Williamstown to three with the opening of its cafes in the Williams Bookstore and the Massachusetts Museum of Contemporary Art campus.

Moresi was quick to point out to Ash that the project has been entirely financed with private dollars.

Ash said the reuse of mills like the NORAD mill are important to Gov. Charlie Baker's administration, which wants to see them used to create new jobs.

Ash lauded Moresi's approach to developing the NORAD mill, noting, among other things, the flexibility it provides to businesses to grow.

"I'm particularly impressed with the partnership with the businesses. You're more than just a landlord, you're a trusted adviser, which is important," Ash said.

Moresi began his business in 2000, during the "dot-com bubble" that sparked growth in North Adams, but faced hardship when an economic downturn struck.

But the city is gaining momentum once again, Moresi said.

From its humble beginnings, Moresi and Associates now has 28 employees in its core real estate development business.