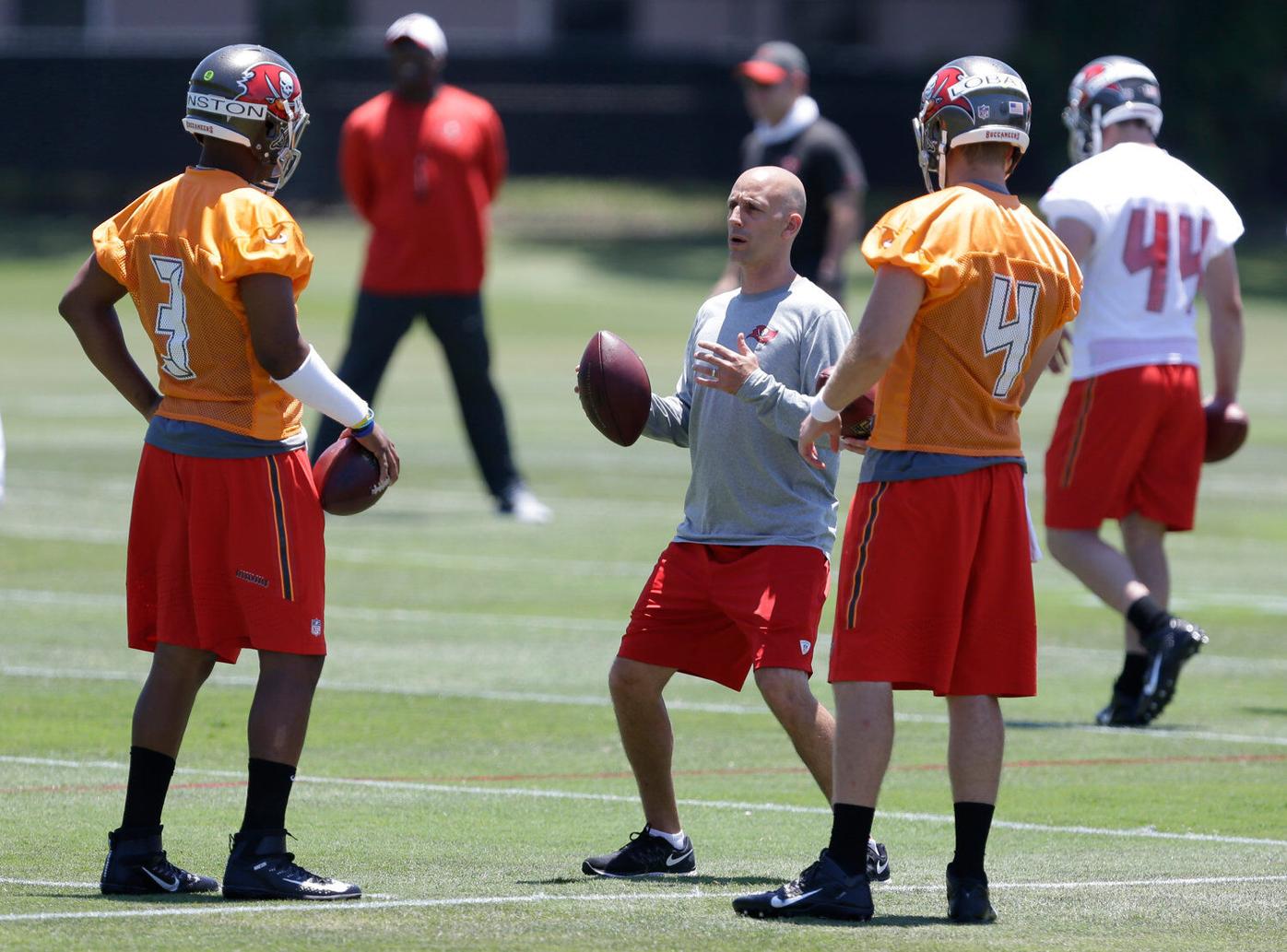 Boston College offensive coordinator Mike Bajakian came to The Heights from Tampa, where he was the quarterbacks coach for the NFL's Buccaneers. In this file photo, Bajakian talks with quarterbacks Jameis Winston, left, and Seth Lobato. 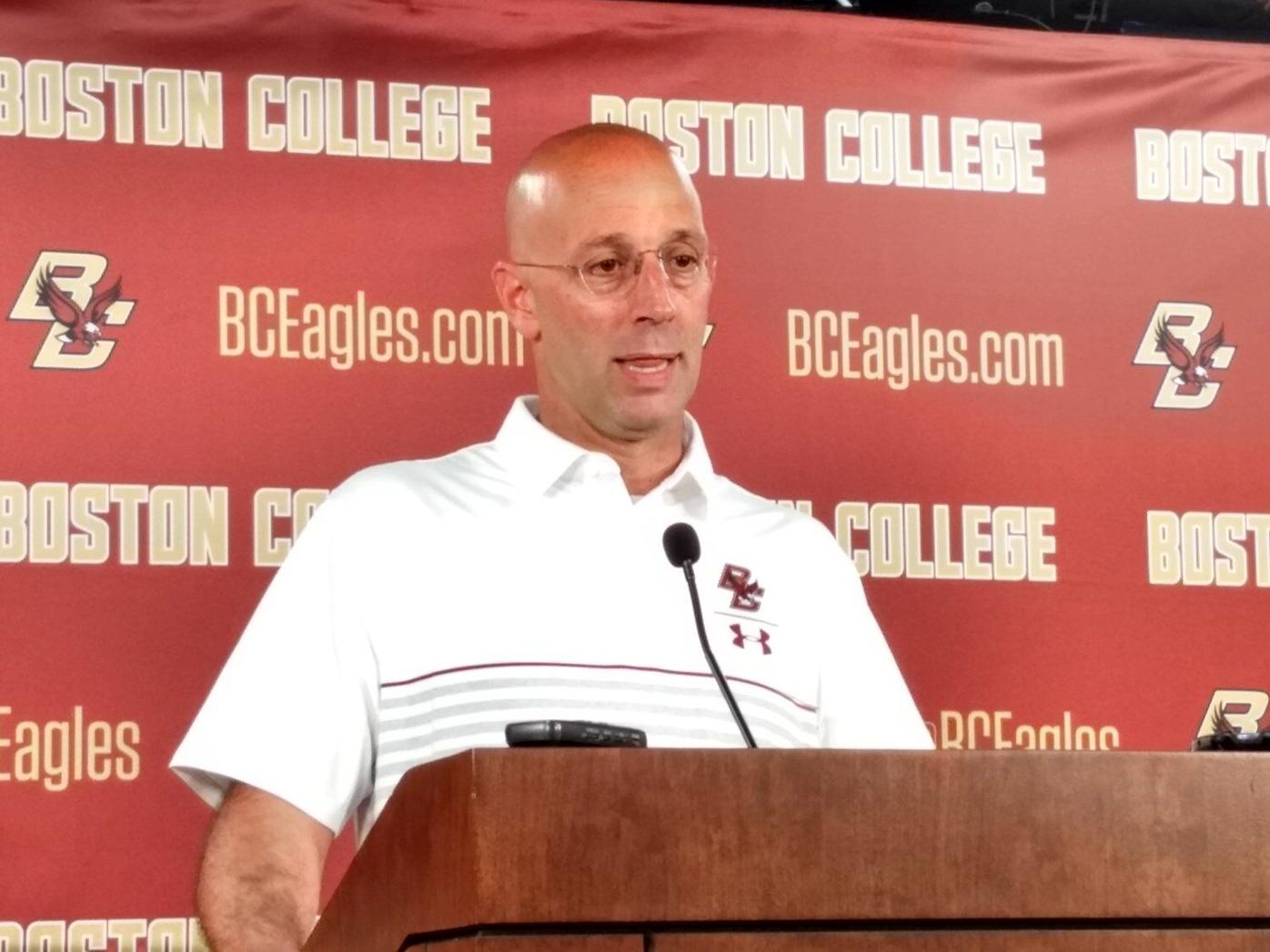 Boston College offensive coordinator Mike Bajakian came to The Heights from Tampa, where he was the quarterbacks coach for the NFL's Buccaneers. In this file photo, Bajakian talks with quarterbacks Jameis Winston, left, and Seth Lobato.

CHESTNUT HILL — Mike Bajakian smiled at the question. The new offensive coordinator at Boston College has worked at five different colleges, a prep school and for two NFL teams. But the former Williams College quarterback said one voice he hears in his head every day is College Football Hall of Fame coach Dick Farley.

"All the time," Bajakian said.

Bajakian, who played quarterback at Williams from 1992-95, came on board at Boston College this year after being the quarterbacks coach with the Tampa Bay Buccaneers from 2015-2018. He was not retained when the Bucs hired Bruce Arians as their new head coach.

Bajakian is replacing Scot Loeffler, who became the head coach at Bowling Green.

"We're a product of the guys we played and coached with," said Bajakian. "Coach Farley, my head coach at Williams College, a Hall of Fame NCAA coach, has been a very big influence in my life."

In his junior season, Bajakian was 92 for 141 for 1,382 yards and a then school-record 17 touchdowns. He was intercepted only once. Bajakian was also a running quarterback, and averaged 3.5 yards per carry and scored five touchdowns.

Boston College is preparing for its home opener on Saturday, Aug. 31, against ACC foe Virginia Tech. Three of the Eagles' first four games are at home. They will host Richmond and Kansas before going to Rutgers on Sept. 21.

Speaking to reporters, Bajakian said he had kicked the tires on several jobs. But BC, with its ACC football and being close to where he grew up in New Jersey, made it easy to accept head coach Steve Addazio's offer.

"I was excited about the opportunity. The caliber of the student-athlete that Boston College is recruiting, student and athlete being two operative words in that phrase," he said. "When this opportunity arose and it started to materialize, it was a no-brainer for me."

Addazio, who led BC to a 7-5 record and a berth in the Servpro First Responder Bowl — which never got played because of inclement weather in Dallas — said it was also a no-brainer to bring Bajakian on board.

"I love the fact that he had started at the bottom levels of coaching and worked his way up, all through the college ranks to the elite college level, and then through into the NFL," said Addazio, who has been at Boston College since 2013. "We had a great quarterback teacher in Scot Loeffler, and I wanted to make sure we maintained a high level of quarterback instruction. I wanted to find somebody who believed in, kind of, what we believe in philosophically from an X's and O's standpoint. A lot of our game is pro based. Mike had come from a background, a little bit like me, when he was involved in spread offenses. He also had a pro component.

"His heavy point of emphasis is the quarterbacks and the throw game."

"It is very easy to learn from him. Right now, we're being put in the best position possible for us to move forward and take that next step," Brown said.

The quarterback smiled when he was reminded that this time last year, Bajakian was in Florida coaching Jameis Winston and Ryan Fitzpatrick with the Bucs.

"I would have never thought this would have been where I am right now," said the quarterback from Cliffwood, N.J. "I am very grateful. We're blessed to have him, and we can't wait."

Brown said that with Bajakian on board, BC did not scrap its offense. Brown said the new coordinator has been tweaking what the Eagles have been doing.

"Anthony obviously has a lot of experience under his belt," Bajakian said of his quarterback. "Experience is the best developer of talent. That alone is going to help him make the jump. He's a hard worker who pays attention to detail. The thing we've emphasized this spring and this summer in training camp is becoming a more accurate passer. We emphasize explosives in our offense. They did a good job here last season. We'll continue to emphasize that moving forward.

"I think more precise ball location can only help in the area of explosives. The phrase we use is turn those receivers into ball carriers."

Bajakian, defensive coordinator Bill Sheridan, assistant head coach and tight ends coach Frank Leonard and Addazio all share a coaching trait. They all coached in high school, either to start their careers or early on.

Bajakian taught math and coached quarterbacks at Delbarton School in New Jersey. He said that experience has him ready to work at Boston College.

"One of the most valuable experiences in my coaching career has been those two years at Delbarton," he said. "If you can figure out how to command a room of young high school kids in the subject of math, and coaching football with kids who have a passion for the game is really not that difficult.

"It did help prepare me to be a teacher, and let's face it, that's what coaching is. It's teaching."