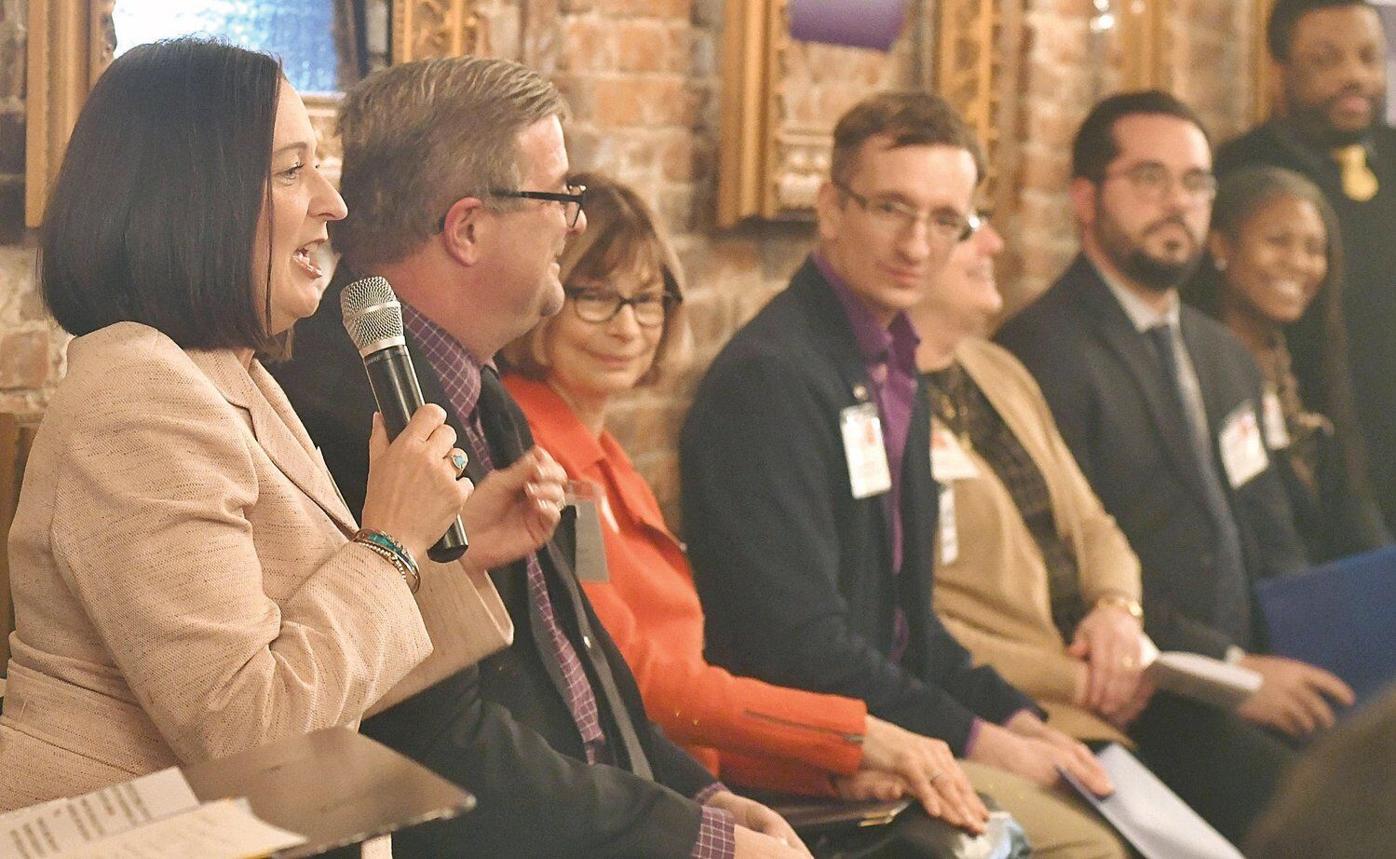 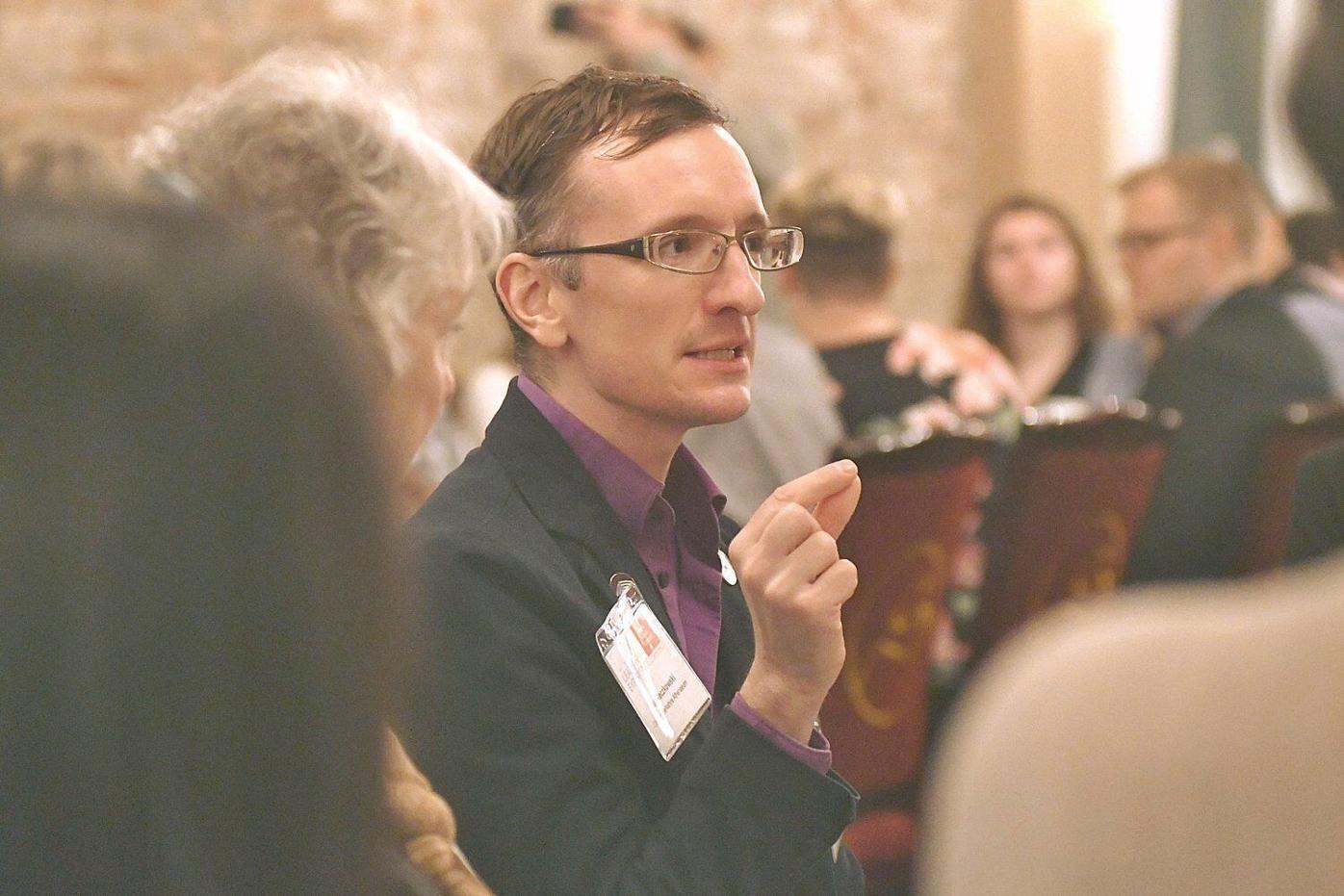 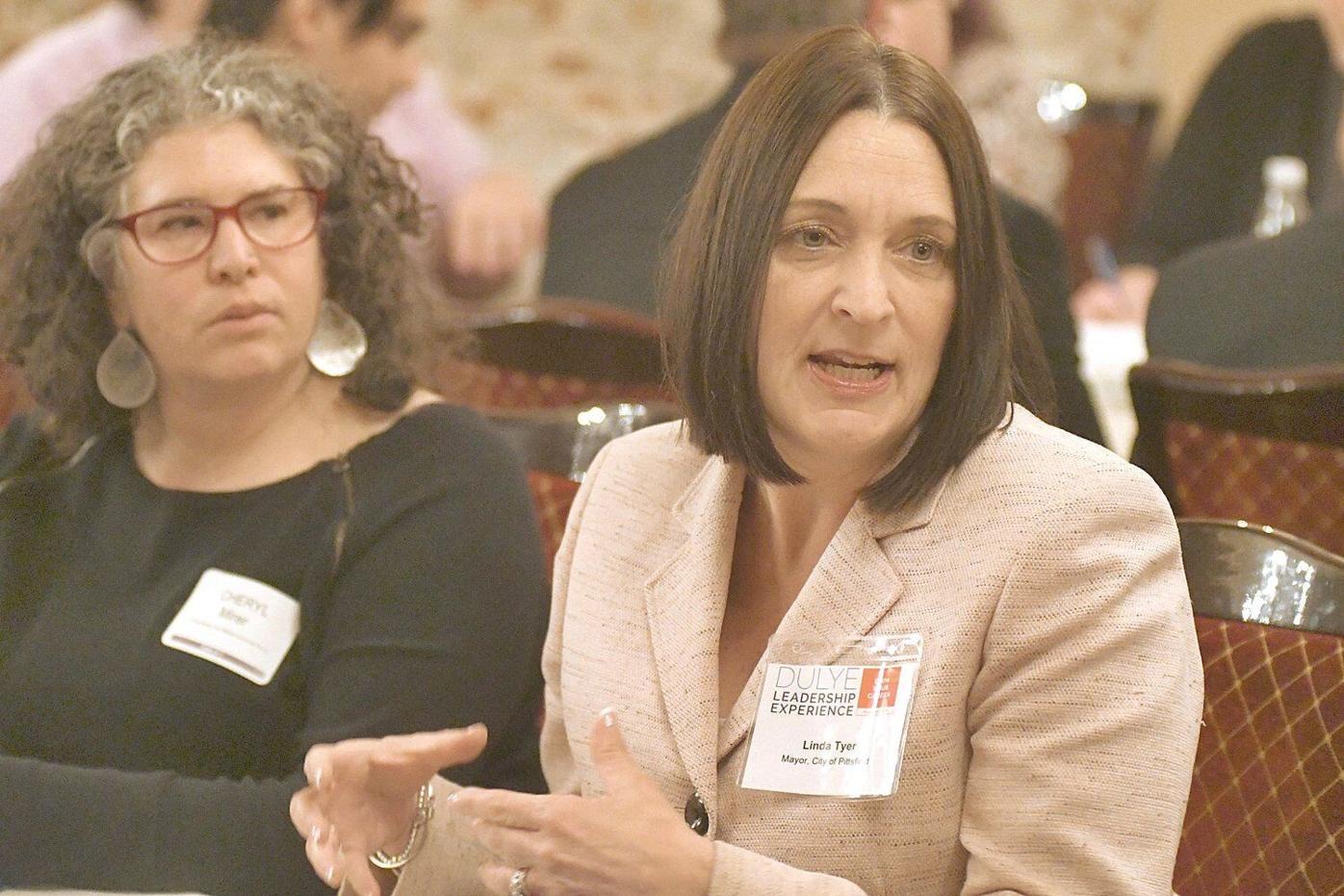 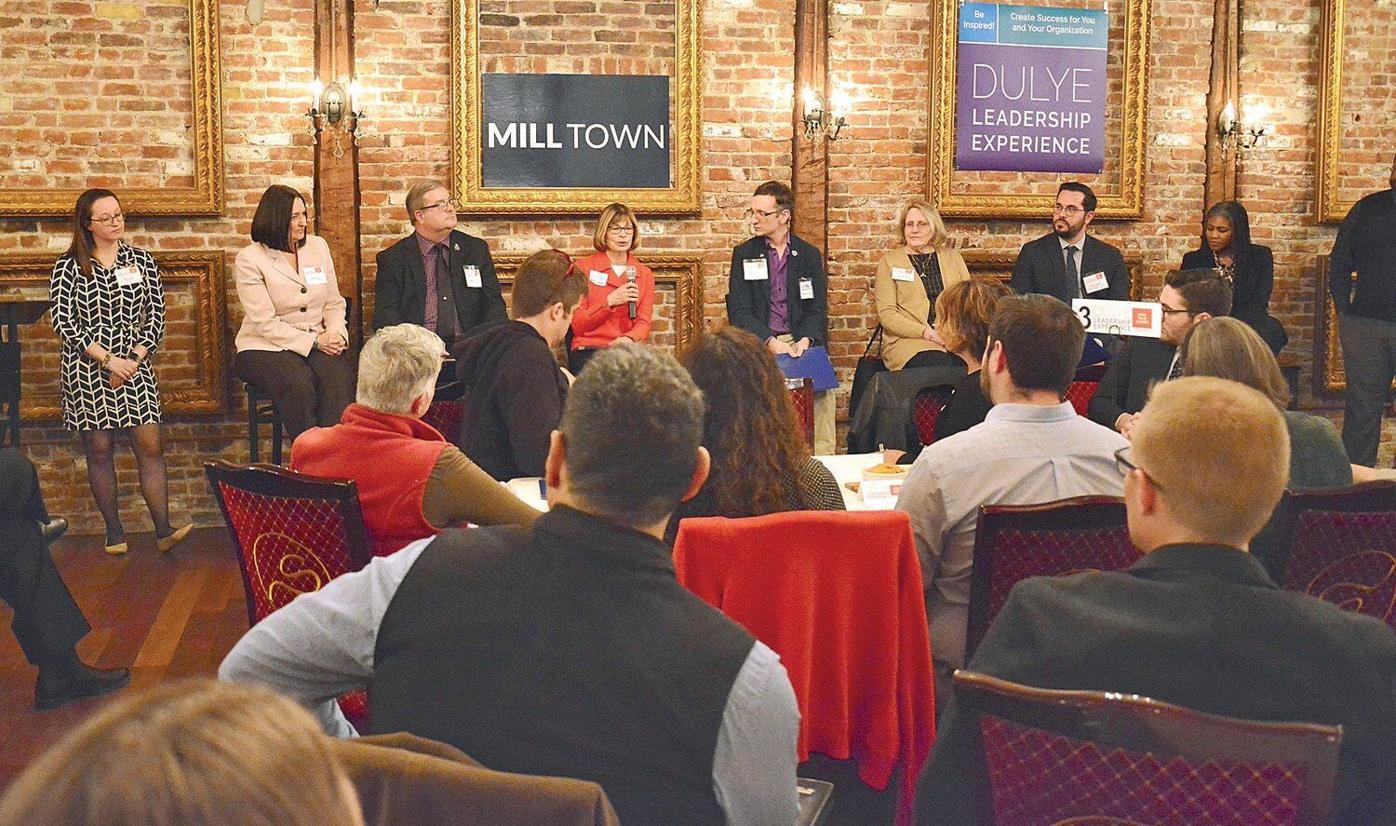 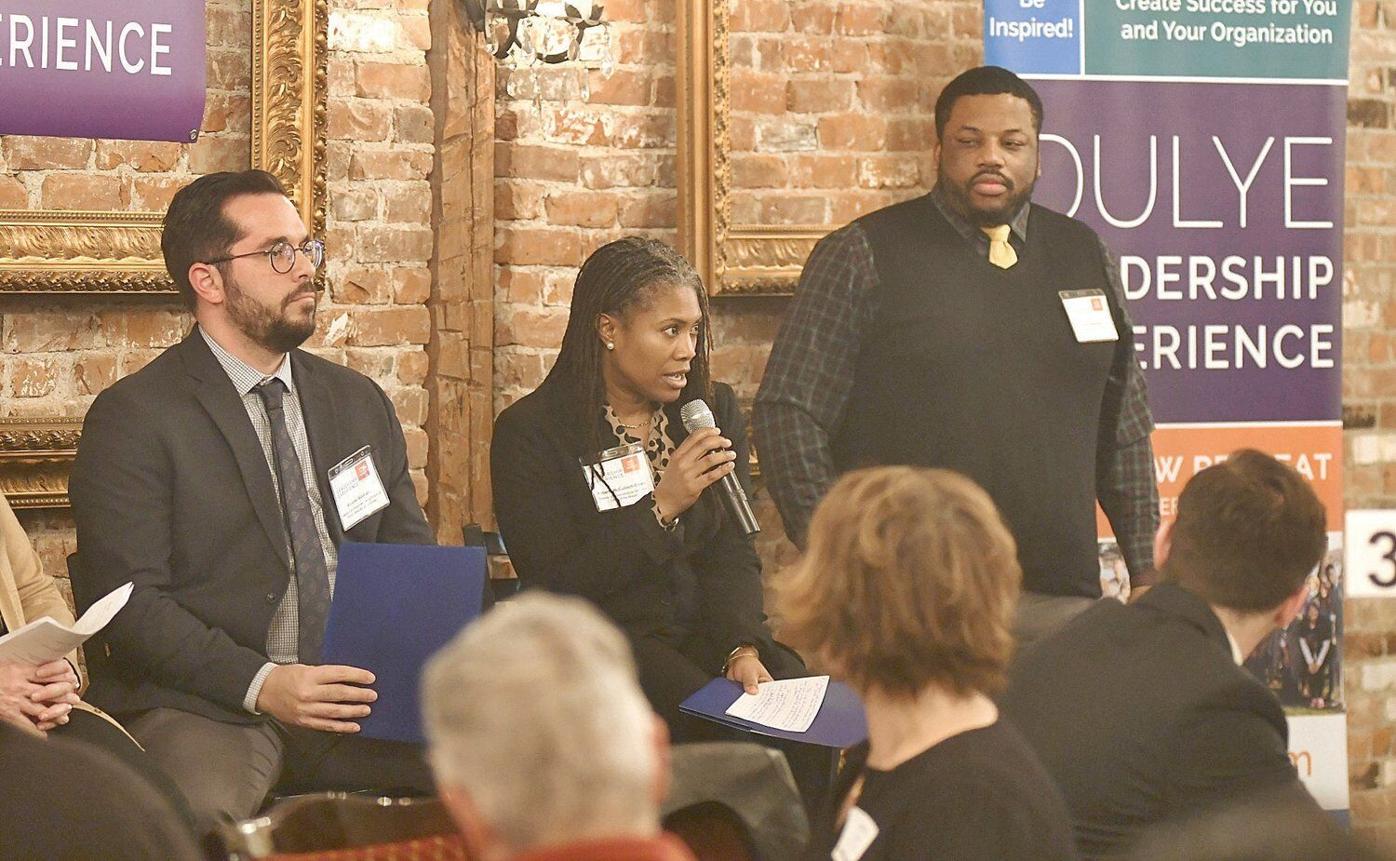 Roberta McCulloch-Dews, center, of the Pittsfield mayor's office, speaks Monday during a leadership conference with Pittsfield city leaders at Hotel on North.

Roberta McCulloch-Dews, center, of the Pittsfield mayor's office, speaks Monday during a leadership conference with Pittsfield city leaders at Hotel on North.

PITTSFIELD — A trip to the grocery store can turn into a series of impromptu meetings, city leaders said during a forum this week.

"You can't make it in and out of the store within 45 minutes," Council President Peter Marchetti told government forum guests gathered at Hotel on North.

It's wise to hit the freezer section last, he added.

An air of recruitment surrounded the event, and several alumni of Dulye's leadership programs signaled intent to run for office at some point in the future.

Caroline Holland, Mill Town's managing director, said the idea for the event stemmed from the realization that the firm has collectively learned a lot about city government that might not be obvious to the average resident. She said Mill Town wanted to share some of that knowledge.

"And hopefully inspire some more ideas and more people get involved," she said.

For Dulye Leadership's part, Executive Director Linda Dulye said the whole concept behind her program is learning and networking, and this event fit that bill.

And that picture is no better at the state level, said AJ Enchill, an aide for state Sen. Adam Hinds, D-Pittsfield.

"Forty percent of the state budget is health insurance," he said.

Marchetti also dropped some insider information about what it's like on the receiving end of a political movement.

"You always know when a campaign is going on around a certain issue, because the phone starts ringing," he said. "And they all have the same speech."

Guests had questions for leaders about hot topics like trash and potholes. Leaders also took time to talk a bit about themselves and their roles.

"It's my job to be the face of the city of Pittsfield," Mayor Linda Tyer told the room.

It's a lot of work, and "I don't do any of it by myself," she said while gesturing to departmental leaders surrounding her. Coordinating the efforts of everyone in City Hall is a constant effort, she said.

As an example, she recounted a mindfulness workshop she took over the weekend while at the Massachusetts Municipal Association conference. She recalled getting texts during the workshop about signatures she needed to gather in order for the Berkshire District Attorney's Office to accept a grant.

"Needless to say, I wasn't paying attention in the mindfulness session," she said, to laughs from the crowd.

In response to one question about what the city is doing to promote business in the city, Community Development Director Deanna Ruffer said, "a lot."

She pointed to the business development manager's position, noting it "took hundreds of hours to convince Wayfair that they wanted to be here."

Asked about major projects under her supervision, Ruffer also pointed to the $4 million dam removal project underway on Mill Street, as well as a bike facilities master plan in process and housing rehabilitation efforts.

Guests also learned that "if you need something, the library has it."

How can people stay in touch with city government? Roberta McCulloch-Dews, the mayor's director of administrative services, said they can subscribe to press releases, follow the city on social media and sign up for CodeRED.

For those seeking more connection with city government, Ruffer said, there are a slew of volunteer boards and commissions that could use a hand.

Getting involved in city politics is about finding your passion, McCulloch-Dews said.

"Whatever your passion is, start from that place," she said.