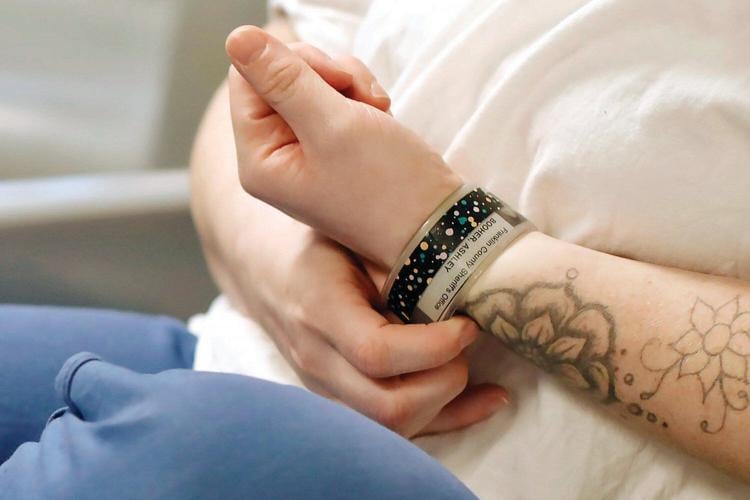 Ashley Booher fidgets with her wristband while at the Franklin County Jail in Greenfield. "When I got here, I couldn't even believe this was a jail," said Booher, 30, of Westfield, who is struggling with a heroin addiction that caused her to steal. 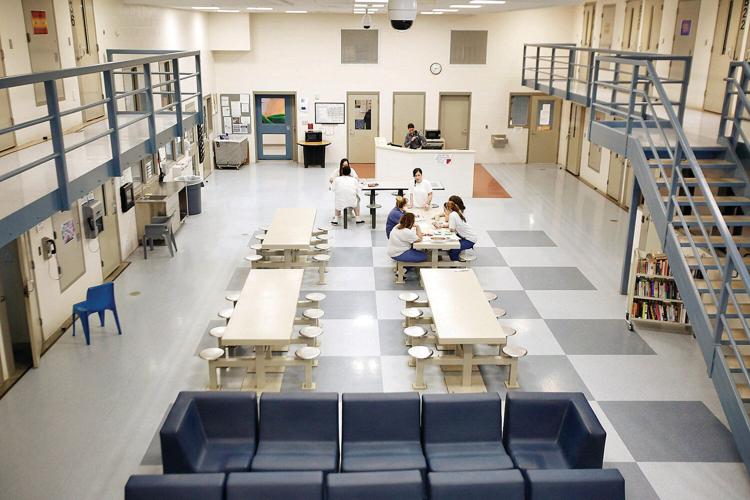 Women are housed in Pod B at the Franklin County Jail in Greenfield. After years of sending women awaiting trial to the Western Massachusetts Regional Women's Correctional Center in Chicopee, Franklin County Sheriff Christopher Donelan consolidated men's quarters at the jail and opened a 71-bed area for women last February.

Ashley Booher fidgets with her wristband while at the Franklin County Jail in Greenfield. "When I got here, I couldn't even believe this was a jail," said Booher, 30, of Westfield, who is struggling with a heroin addiction that caused her to steal.

Women are housed in Pod B at the Franklin County Jail in Greenfield. After years of sending women awaiting trial to the Western Massachusetts Regional Women's Correctional Center in Chicopee, Franklin County Sheriff Christopher Donelan consolidated men's quarters at the jail and opened a 71-bed area for women last February.

GREENFIELD — Bring the women home. That's the message a sheriff heard around Franklin County after he built a drug treatment program for incarcerated men.

It prompted a big change.

The women's pod not only allowed women to be jailed in their home county, it offered women from surrounding areas access to what is considered the most current and effective method of treating addiction.

And by opening what he calls a "locked treatment ward," Donelan's approach addresses problems created by the distance of an out-of-county regional jail.

In a January series, "Sent Away," The Eagle explored inequities of a system in Western Massachusetts in which women, not men, are jailed in a different county.

Attorneys and prosecutors say the regional system compromises women's access to ideal legal representation while awaiting trial. Because of the distance that families must travel, the system further isolates women from their families, who can struggle logistically and financially to keep in contact and to visit the jail.

State legislators, and local officials, including Berkshire County Sheriff Thomas Bowler, say they agree that the distance is not ideal for women. But they point to millions of dollars in taxpayer money that built the Chicopee regional jail and say the current system might be expensive to change.

Until last year, going to jail in one's home county was only possible for Hampden County women. All women in the Berkshires, as well as those from the other three counties in Western Massachusetts, had been funneling into the Chicopee jail, which is run by the Hampden County Sheriff's Department. The Chicopee jail, completed in 2007, began admitting Berkshire County women in 2014.

The jail solved logistics and financial problems for the county sheriffs, who had to keep men and women separate and who struggled to provide women with the same number of programs as for men.

Women from Berkshire and Worcester counties are still sent to Chicopee, as are some women from Hampshire County. But with the opening of the women's pod at the Greenfield jail, other Hampshire County women are sent there if it is closer to their hometowns, since Hampshire County sits between Hampden and Franklin counties, Donelan said.

Female defendants from any county in the state can be admitted to the Franklin County Jail if a judge approves an attorney's request that a client come here for treatment, say jail officials.

Several of the 32 women now at the Greenfield jail have been in and out of substance abuse treatment and jail. They said being forced into what they term a compassionate and effective program gives them hope for a different life.

"They treat us like humans," said Krista O'Brien, 25, of Northampton, who counterfeited money to pay for her heroin habit.

"When I got here, I couldn't even believe this was a jail," said Ashley Booher, 30, of Westfield, who also is struggling with a heroin addiction that caused her to steal.

Donelan said he was able to create these programs at the jail and bring women here because he was in a "unique" position to get funding, unlike the other county sheriffs.

After his election in 2011, Donelan, who serves towns that sit along the Interstate 91 drug corridor, saw an opportunity. He shaped a plan for a substance abuse treatment center and in 2013 secured a two-year federal grant worth $600,000.

He later consolidated some of the men's pods so he could open a section for women last year.

Donelan said that starting "with nothing" helped in his quest for the federal backing.

"I became sheriff in 2011 and realized there was nothing going on here," he said. "This was literally a warehouse for men who were just sleeping all day. So, it allowed me the opportunity to create something complete new."

That was "Evidence Based Cognitive Behavioral Therapy." Rather than speak of "the evils of drugs and alcohol," the program drills down to what Donelan termed underlying mental health or trauma issues.

All women who come to the Greenfield jail automatically enter into treatment. There is a small section within the female pod for women who decline treatment. Those women do not mix with the larger population in treatment at the jail.

Donelan says he was under "a lot of pressure" from constituents to make this happen.

"Why don't the women get this?" he said he was asked repeatedly. "They have treatment at Chicopee, but it's just not this type of an immersion. Sheriffs are elected. And so we respond to our constituents."

Donelan said it has cost his department $400,000 to $500,000 to maintain programming that includes the medically assisted treatment with drugs like Suboxone, and that this is not funded by the Legislature. He said a supplemental appropriation would help close this shortfall.

Donelan cautions that not all Western Massachusetts sheriffs can do what he did, and he emphasized the expense of programs.

"We're all pressured financially because the Legislature is stingy with us," he said. "I don't fault the other sheriffs, because I know how expensive it would be for them to try to either make a move or to transform what they're doing into something else."

In Pittsfield, Sheriff Bowler still is waiting for the release of $2.5 million approved for a pre-release center for men and women that, he says, will ease their transition back into the community.

Bowler suggested that it's hard enough to keep within the budget.

"We can't even get funding for just what you need here," he said, adding that he would "absolutely" be open to making space for women at the Berkshire County Jail and House of Correction "if legislators want to come to the table and have that discussion."

The Berkshire jail's superintendent, John Quinn, said big-money questions are answered "a lot higher than us, at the legislative level."

"Now [that] we've built this, we got to send them," Quinn said of the Chicopee facility. "If everybody leaves Chicopee, what do you do with Chicopee?"

Donelan explained that with addiction increasingly viewed as a disease, lawmakers might be shy about spending money on jails or building new ones.

"The opioid epidemic has changed the conversation," he said, noting that he does not "necessarily agree" that people with substance abuse problems should be jailed.

"But until they fund 10,000 treatment beds in the community, we're the only option," he said.

"We need treatment before they even go to jail. It can't be, 'Until you break the law, you're not going to be treated,' " he said.

Pignatelli said the discussion about whether to consolidate men's pods to make room for women at the Berkshire jail is worth having, especially since the jail is under capacity and there are more women going to jail as well as more substance abuse.

But Pignatelli cautioned that it was the expense of staffing and programming at county jails in the region that led to the construction of the Chicopee jail.

State Sen. Adam Hinds, D-Pittsfield, could not be reached for comment, but he previously said he would support an effort to move women back to Berkshire County, while also pointing to the expense.

Donelan said it was outside money, from the federal government, that allowed him to respond to constituent requests.

"The advantage that I had was, I started with nothing and I got a federal grant to build something. And they haven't had that opportunity," he said of other sheriffs.