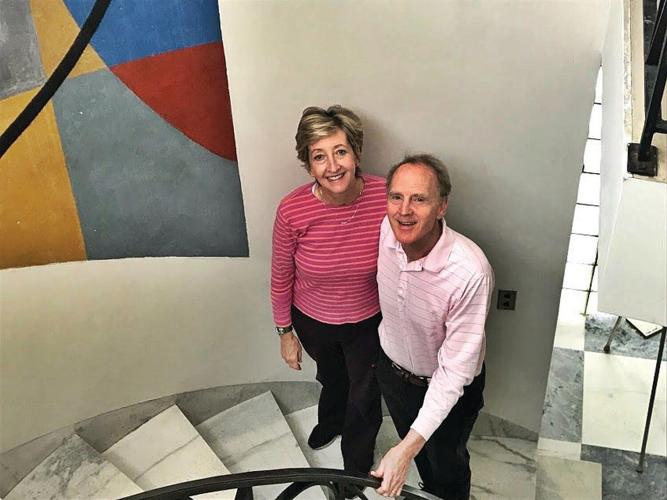 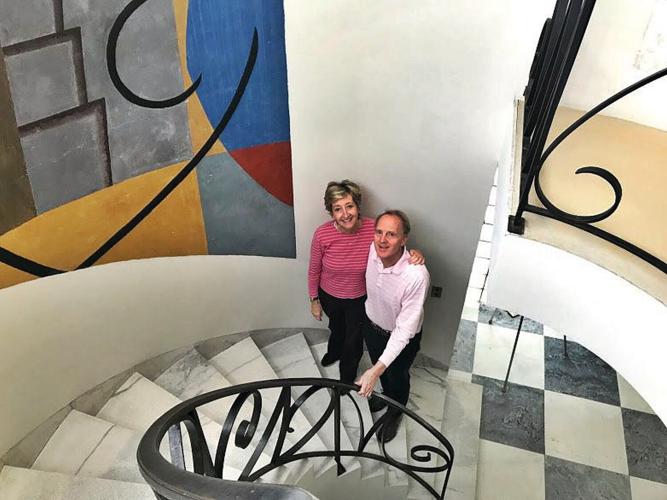 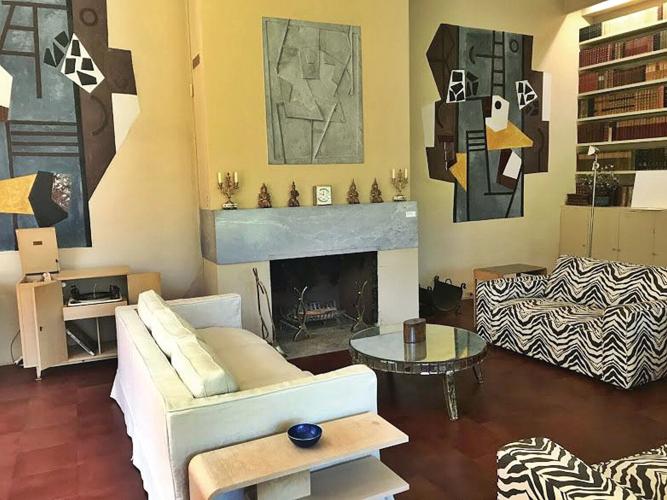 The living room at the Frelinghuysen Morris House and Studio, with its newly replaced leather floor. 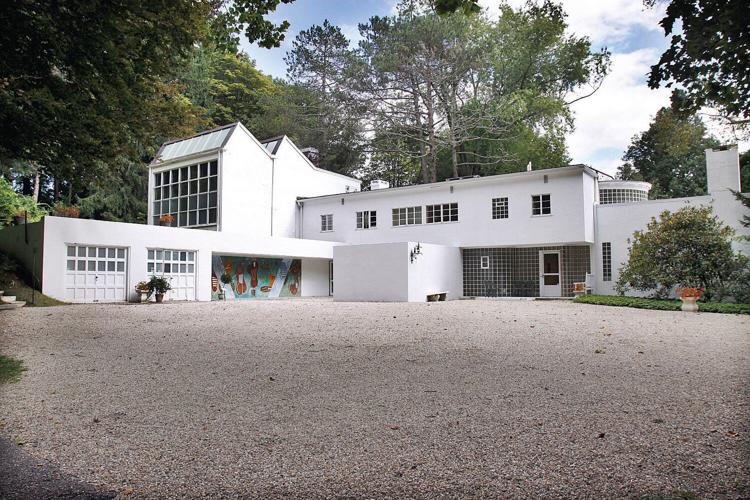 The Frelinghuysen Morris House and Studio opened its doors to visitors in 1998. 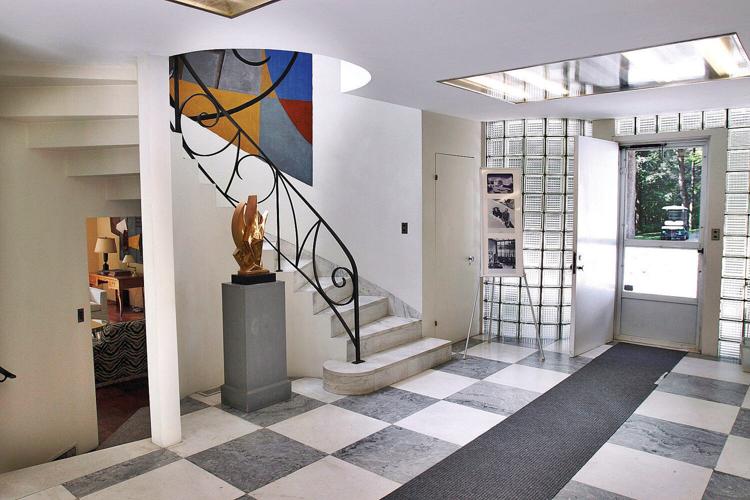 The foyer of the Frelinghuysen Morris House and Studio in Lenox. 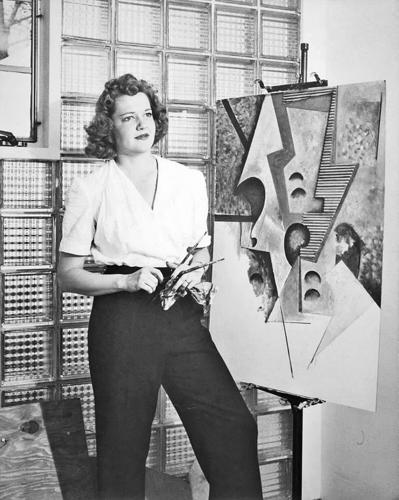 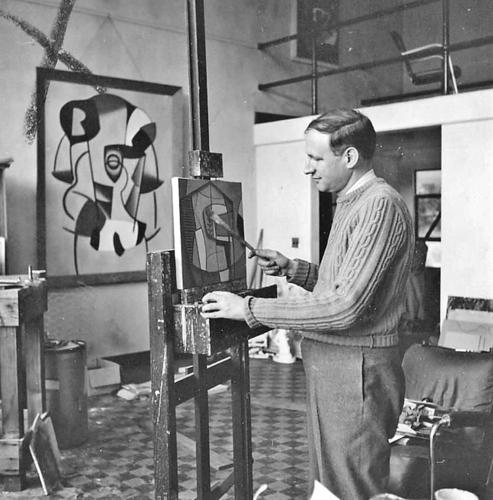 The living room at the Frelinghuysen Morris House and Studio, with its newly replaced leather floor.

The Frelinghuysen Morris House and Studio opened its doors to visitors in 1998.

The foyer of the Frelinghuysen Morris House and Studio in Lenox.

LENOX — When the Frelinghuysen Morris House and Studio opened its doors to the public in July 1998, the crowds of people lining up to view the home of abstract artists George L. K. Morris and Estelle "Suzy" Frelinghuysen was greater than imagined.

"The New York Times had done a piece just days before. People in line were clutching the article in their hands," Linda Frelinghuysen, FMHS communications director, said of that first day, nearly 20 years ago. "We were prepared to take 12 people at a time on the tour. We had 16-year-olds in the parking lot selling tickets, with a lock box, and only accepting cash."

"We were wondering if anyone would come out," director Kinney Frelinghuysen reminisced during a recent interview at the Hawthorne Street property. "We weren't sure."

And come, they did.

The couple had spent a decade realizing the dream of Kinney Frelinghuysen's aunt, Suzy, who had established the Morris Foundation before her death in 1988. It was her wish to keep the Hawthorne Avenue house and studio, as well as the majority of her and her late husband's assets, in tact.

Morris and Frelinghuysen divided their time between Lenox, New York and Paris. During the 1930s and 1940s, they were busy introducing America to modern art. Besides being artists themselves, both George and Suzy, a trained opera singer, were founders of the American Abstract Artists. Morris wrote criticism for the Partisan Review and Frelinghuysen sang for the New York City Opera. They collected abstract art, often buying direct from the artists, whom they were friends with.

During the decade following Suzy's death, the Frelinghuysens brought together that art collection, spread among the three properties, along with letters, sketchbooks and works belonging to George and Suzy.

"They were everywhere," Kinney said of the art collection. "They were in closets in New York and here. There was furniture stored in a barn."

And much time was spent on securing permits, from both Lenox and Stockbridge, as the property's 46 acres stretches into both towns.

"It was exciting," Linda said. "Our children were little then. On the first day, one of our sons acted as the doorman. But we figured it out. We figured out how to get people through the house and what to say. Our guides learned how to tailor to who they have in their group. Sometimes, it's architects. Sometimes, it's art lovers."

And at the same time, the couple says, they've learned from the visitors they've brought through the house.

"I'll never forget the day we got a call from one of the guides over the Walkie-talkie that a guest was turning furniture upside down," she said. "I knew what he was doing. He was an expert looking for the provenance on the underside of the chair."

The expert, Mark McDonald, of Hudson, N.Y., had recognized numerous pieces of mid-century modern furniture in the home, set up as it was in the 1940s, crafted by Gilbert Rhode, Donald Deskey and Alvar Aalto. His visit led to the Frelinghuysens being able to identify and restore several pieces of furniture.

Other experts have helped archive the FMHS collection, which is now digitally archived.

"It's allowed us to begin to study the sketchbooks and letters," Kinney said.

There's also been a focus on maintaining and restoring the house over the last two decades.

"My goal is to solve the problems, not just temporarily fix them," he said.

The most recent restoration project, the home's marble back patio and steps, took four years to fix.

"It took a long time to figure out how to do it," Kinney said. "You need to have the right person to do it."

The solution was Verne Tower of Richmond, who found marble to match the original, which was quarried in Lee, and repaired the cracked patio.

There have been problems with the climate control, which when installed, was never tweaked for the stucco house.

"It was too humid in the winter and working too hard in the summer," Linda said. "We found a person who could fix it, but it had become problematic."

This season, the Frelinghuysen had the blistered stucco walls repaired and painted, and addressed a structural failure in an upstairs bedroom.

"The glass in the dining room's antique sliding doors cracked. We just didn't fix the window, we knew it was part of a greater mystery," Kinney said. "We knew it was indicative of a greater structural problem. Water had gotten under part of the house and caused beams in the wall to fail. It takes time to show up."

A $19,185 matching grant from the Lenox Community Preservation Fund has allowed the structural issues to be addressed.

In a house where original frescoes are on almost every wall, correcting the source of the problem is of major importance.

"This is an iconic house. It will be easier for future generations to preserve it if we address these issues now," he said. "We have 20 years of documented repairs and archival photos."

It's his hope that a family member, perhaps their sons, John and Thomas, will one day take their place at the helm.

"We've been very conservative with the endowment," Kinney said. "We've invested conservatively and tried not to spend to much of it. The New York apartment and the Paris townhouse were sold to help create the endowment. We're trying to keep this going after we're gone."

In the meantime, the Frelinghuysens are busy running the day-to-day affairs and planning for the future.

"My dream is to secure National Historic Landmark status, instead of just having it on the National Register of Historic Places," Kinney said.

But the real question is, would his aunt be pleased with what they've accomplished in the last 20 years?

"I always worry about that. I sometimes dream that she comes to the house and sees her bedroom and studio fixed up and on display," he said. "I think she and her husband would be pleased. They were under appreciated in their time."