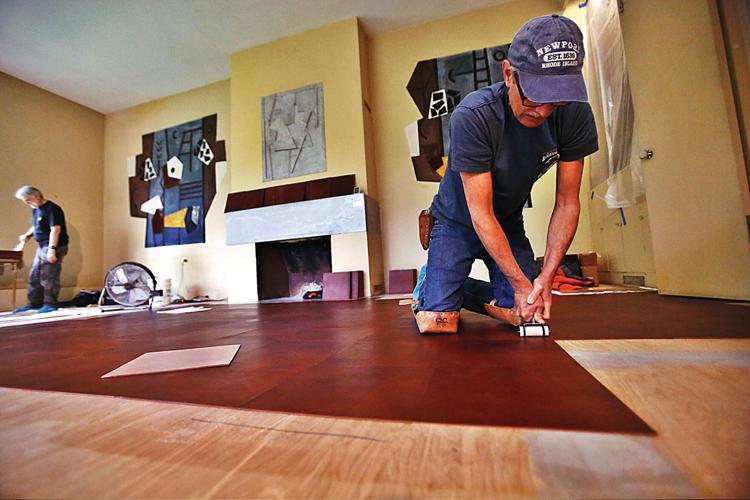 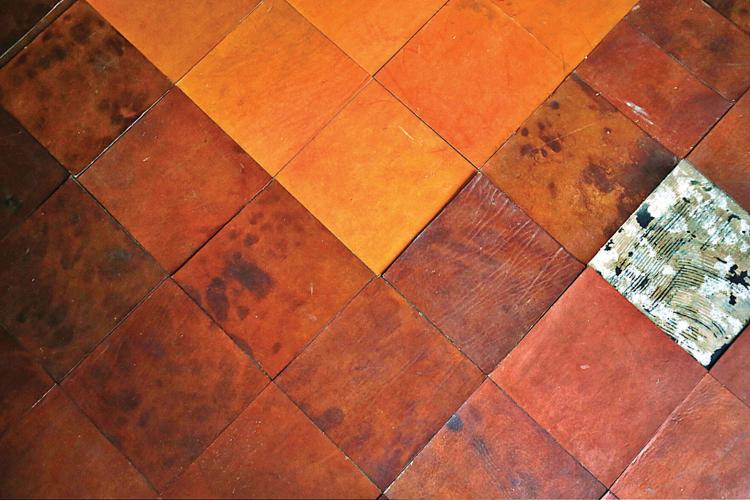 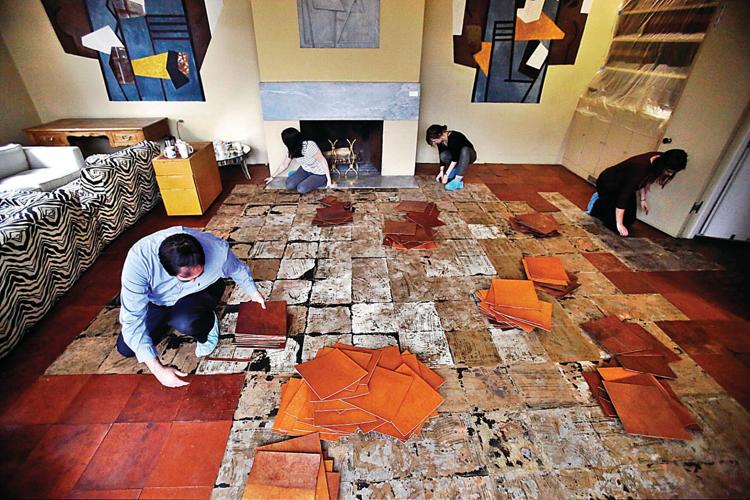 Employees easily tear up the 76-year-old leather floor in the living room of the Frelinghuysen Morris House in Lenox. 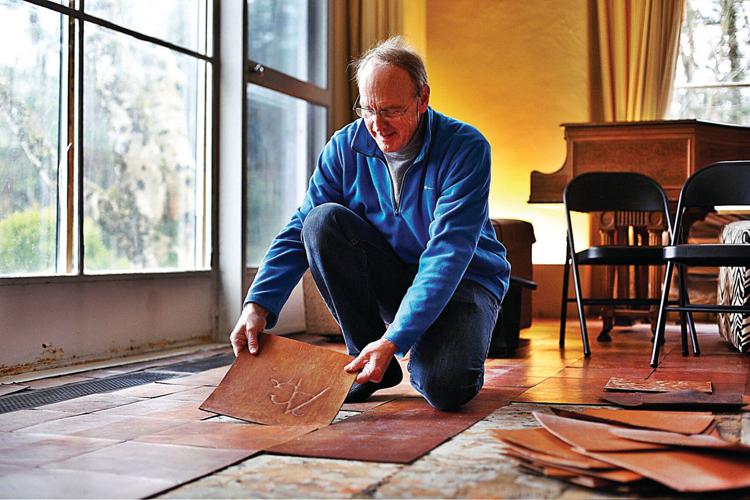 Museum Director Kinney Frelinghuysen lifts a panel of 76-year-old leather tile from the floor of the living room of the Frelinghuysen Morris House in Lenox.

Employees easily tear up the 76-year-old leather floor in the living room of the Frelinghuysen Morris House in Lenox.

Museum Director Kinney Frelinghuysen lifts a panel of 76-year-old leather tile from the floor of the living room of the Frelinghuysen Morris House in Lenox.

It was just one of the challenges faced by T. Kinney Frelinghuysen, director of the Frelinghuysen Morris House and Studio, when the museum's trustees decided it was time to replace the 76-year-old leather tile living room floor.

"Tiles were coming up. We were tripping over them," Frelinghuysen said. "Instead of being a feature, it was becoming a problem. The other trustees noticed it too. Every year there is a decision made about which items we are going to repair, replace or restore. The floor has been on the list for a while and the decision this year was to push it to the front of the list."

The leather floor tiles were first installed in 1941, the year the two-story white stucco and glass Modernist house was built by abstract artists George L. K. Morris and Suzy Frelinghuysen and integrated into the existing studio.

At first the idea was to replace only the tiles that were loose, worn or had suffered water damage, Kinney Frelinghuysen, the artists' nephew said.

"I was really attached to the old look. But now, I'd rather have it look as it did when they built the house," he said.

The change of heart was partially motivated by a section of tiles his aunt had replaced in 1959.

"There had been some sort of damage to the floor and a large white rug covered the floor until the tiles could be replaced," Linda Frelinghuysen, the museum's communications director and Kinney's wife, said. "One of our staff members found letters Suzy wrote to George about how she and a friend helped the installer."

In her letter, Suzy wrote about the floor: "The man arrived early this a.m. and we worked along him — laying pieces all of different sizes, fitting them all together like a puzzle. The leather Rummler supplied is much lighter than the old, but he assures me it will not be long in darkening like the rest. As is stands now, it is a rectangle about toward the middle of the room in leather, which is the color of pig skin."

The white carpet, which the couple had hoped to remove from the room following the replacement of the tiles, was eventually put back in place to hide the out-of-place tiles.

"Replacing a leather floor isn't easy," Linda Frelinghuysen said. "We had to do a lot of research. It turns out there are really only three companies left that make the type and quality of leather we needed."

They ordered samples from Edelmen Leather in Connecticut, Spinneyback Leathers in Chicago and Blackstock Leather Inc. in Ontario. They eventually settled on tiles in the color "clove" from Blackstock.

"You can't have just anyone install it," Linda said, as the couple and four staff members gently pried the aged leather tiles from the living room floor in April. "You have to have the right people install it or it will just start coming up again."

And it's worth waiting for the right team to do the job — each leather tile costs $45, while price to install the flooring is over $10,000.

During the two-month interval between the removal of the old tiles and the installation of the new, a subfloor was installed in the living room to provide a flatter, smoother surface.

The number of expert leather tile installers is similar to that of leather floor tile companies and the demand for their services is even greater, she said.

Having already measured and marked the plywood subfloor during a prior visit, the trio of master installers from Floor Tile Specialists Inc., out of Levittown, N.Y., went straight to work upon arriving at the house on June 6.

"We've been doing this for 20 years," Karl H. Szadok said. "We started laying regular vinyl floors in 1979. In the beginning, we started doing leather floors because we were asked to do it. Nobody was doing it 20 years ago. We started doing it and kept on doing it because there was enough need to keep it going. We started doing floors and walls in Manhattan and then branched out to the tri-state area. From there, our clients were on the national level and then international."

Over the last two decades, the team has put down leather tile flooring in 22 states and five countries.

"We've been to Turkey, Ireland, Canada, the Dominican Republic and Cabos San Lucas, Mexico," Steven Weber said. "We've worked for some of the richest people in the world."

So what makes them one of the most sought after leather tile installers?

"It's knowing how much pressure to apply," Szadok said. "And it takes two coats of the glue on the tile. Most of the other guys will use one coat of glue. After six months of leather expanding and contracting, those tiles start to come up if they only have one coat of glue."

To begin, the crew began applying the contact adhesive to the 12-inch by 12-inch leather tiles, which were then stacked and set aside. An additional coat of glue is applied to the floor prior to placing the tile.

"The adhesive becomes tacky, like fly paper," Szadok said. "It's OK until you're ready to use it. Once you apply it to the floor, you're not getting it back up."

Like any tile flooring job, Szadok said it's best to start in the center of the room, working out to the edges where it's easier to trim the tiles to fit.

"What's important is the amount of pressure that's applied to them, especially at the seams," Weber said. "I've seen guys use really big rollers to get the job done. I use just a regular carpet seam roller."

The small roller, he said, takes more time but is more efficient in the long run.

"You need to apply 25 pounds of pressure per square inch to get the adhesive to set right," he said. "This way, I know the tiles, especially the seams, are set correctly."

So how long does it take to install a leather floor?

"We do this all the time. We should be done in a week," Szadok said.

And they were. On Monday, June 12, the Frelinghuysen Morris House and Studio's Facebook page posted pictures of Weber buffing the completed leather floor with the caption: "The leather floor is officially installed and it looks beautiful! Come by FMHS this summer to see for yourself!"