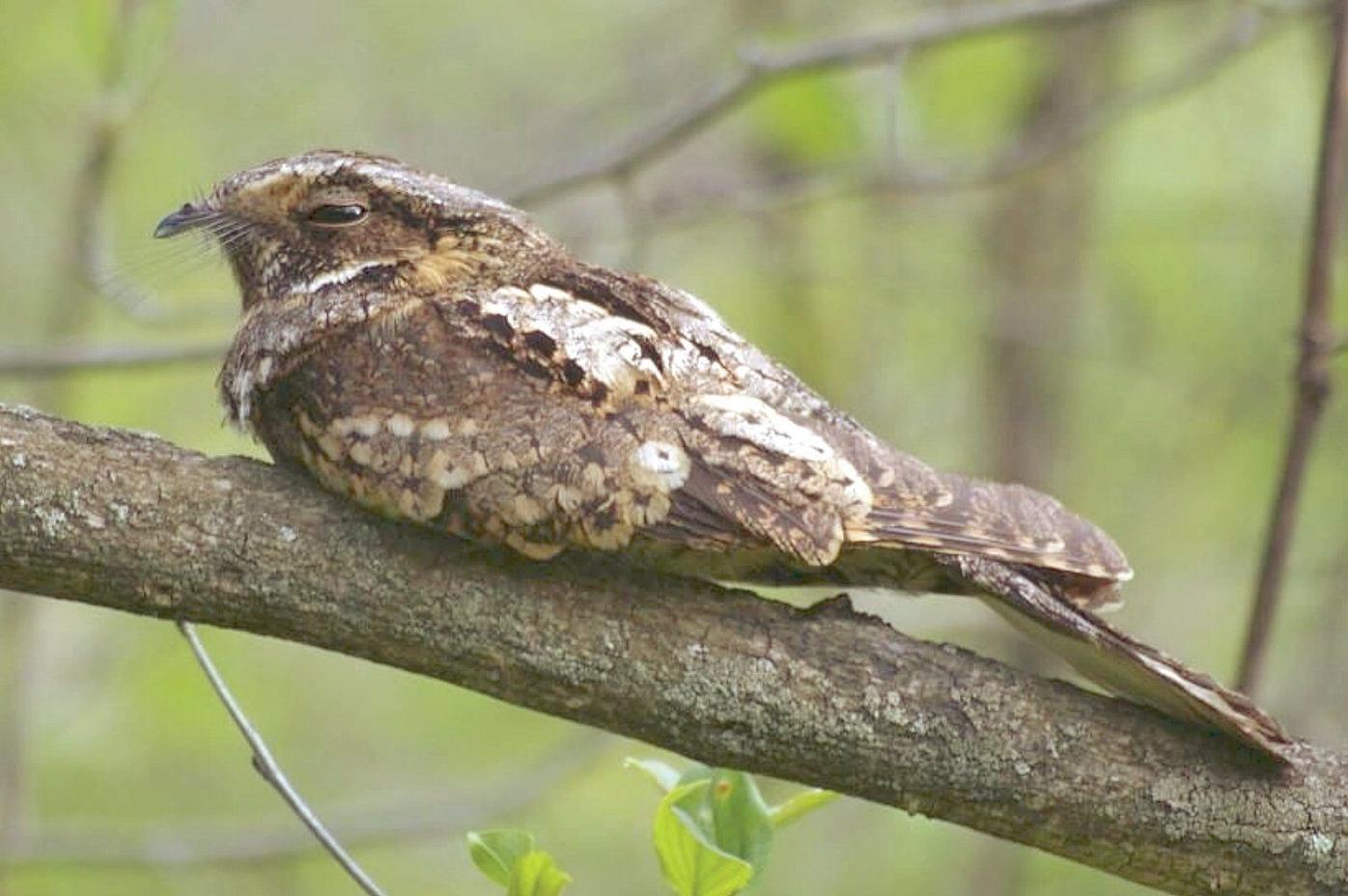 MassWildlife is putting a special spotlight on whip-poor-wills this month. 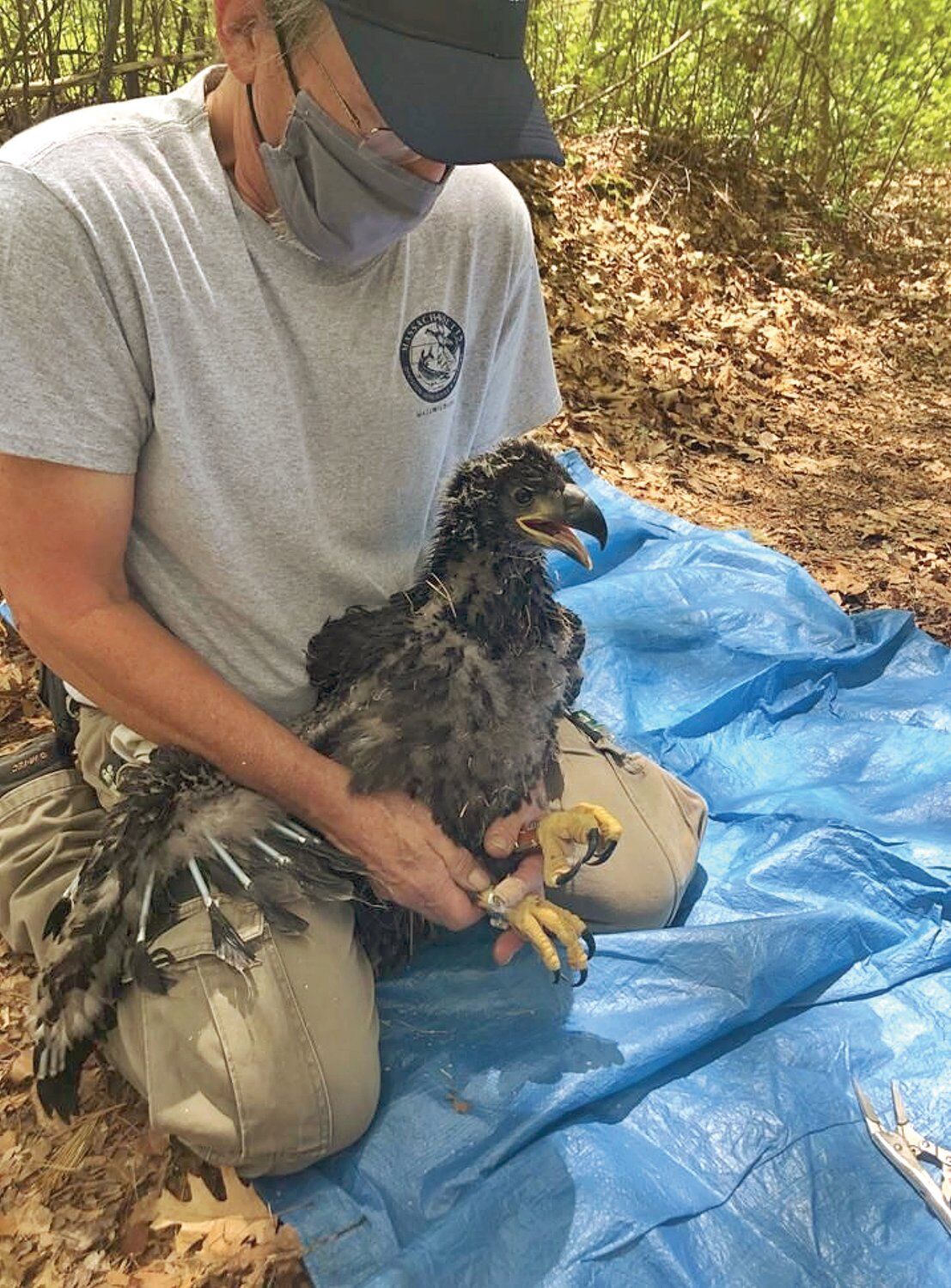 A MassWildlife biologist puts a tag on a young bald eagle. The population of bald eagles in the state is continuing to grow, and a new nest found on Cape Cod is drawing particular excitement.

MassWildlife is putting a special spotlight on whip-poor-wills this month.

A MassWildlife biologist puts a tag on a young bald eagle. The population of bald eagles in the state is continuing to grow, and a new nest found on Cape Cod is drawing particular excitement.

If you have been reading MassWildlife's monthly newsletter and other material lately, you probably noticed the emphasis on birds. What people are probably most excited about is the existence of a nesting pair of bald eagles in the town of Barnstable on Cape Cod. This is the first time in 115 years they have nested on the Cape.

The numbers of bald eagles in the United States crashed during the first half of the 20th century. It got so bad that bald eagles were listed as federally endangered species in 1967. In Massachusetts, they were absent from 1905 until 1982, when several eagles were discovered wintering in the Quabbin Reservoir area.

MassWildlife and its partners brought young bald eagles from Canada and Michigan to live in the reservoir area during the 1980s, hoping to restore their population in the state. Well, it worked. According to Marion Larson, MassWldlife Chief of Information & Education, the number of bald eagle nests in Massachusetts continues to grow and now there are up to 70 nests and growing. MassWildlife reports that more than 845 chicks are known to have fledged in Massachusetts since their restoration.

Here in the Berkshires, it is quite common to see the bald eagle soaring high above, but it is a big thing on the Cape.

MassWildlife also recorded the first known nest on Martha's Vineyard this spring, but the eggs were destroyed before they could hatch. A bald eagle pair took over an Osprey nest on the island and laid eggs there, MassWildlife said. But when the Ospreys returned from their wintering grounds, they harassed the eagles and caused them to accidentally claw open the eggs while trying to defend the nest with their talons.

Bald eagle chicks in two other nests in Massachusetts were also killed during attacks by intruding birds this spring. While sad, MassWildlife said these events are a sign of a thriving eagle population in the region. Sounds like we need a bird mediator here!

Interestingly, a bald eagle that hatched at the Quabbin Reservoir in 1997 migrated to New Hampshire and nested there between 2007 and 2014. The bird recently became the oldest bald eagle ever recorded in that state, according to New Hampshire wildlife officials. The previous New Hampshire record holder was a 19-year-old bird that had also hatched in Massachusetts. Thanks to the MassWildlife eagle reintroduction program that was conducted in the 1980s, other states in New England have also greatly benefited.

Incidentally, that New Hampshire bird is about four years older than the female bald eagle that photographer Mark Thorne of Pittsfield has been monitoring on Onota Lake in Pittsfield.

Thanks to conservation efforts, bald eagles were removed from the federal list of threatened and endangered species in August 2007. Their status was also recently upgraded from "Threatened" to "Special Concern" on the Massachusetts Endangered Species Act (MESA) list.

Coincidentally, the year 2020 marks the 30th anniversary of the MESA. To celebrate, MassWildlife will be highlighting one rare species each month as a "Species Spotlight." Through the implementation of MESA, MassWildlife's Natural Heritage and Endangered Species Program (NHESP) conserves and protects the most vulnerable animals and plants of Massachusetts and the habitats upon which they depend.

This month they are spotlighting the eastern whip-poor-will, which is classified as a species of "Special Concern" in Massachusetts.

They can be 19-inches long with an 18-inch wingspan. Whip-poor-wills are nocturnal, in that they migrate, call, court, and feed almost exclusively at night. Their primary foods are moths and other night-flying insects.

The whip-poor-will's life history is tied very closely to the moon cycle. Their signature call is most intense around the full moons of May and June. They lay their eggs so that the chicks hatch ten days before a full moon; that way, the adults will have the maximum amount of moonlight to forage as they feed their chicks.

Whip-poor-wills were once found in nearly every town in Massachusetts. Their former ubiquitous presence, coupled with their mournful whistled call associated with moonlight, made them legendary features of folklore, superstitions, and omens.

You can go online to learn more about the omens and superstitions. Also, if you google the whip-poor-will you can hear their call.

Habitat loss is the primary threat to whip-poor-wills in Massachusetts. Habitat loss can be the result of land conversion through development, or lack of natural disturbance, such as the exclusion of fire from the landscape.

Whip-poor-wills rely upon habitats that experience regular disturbance events, such as fire. MassWildlife partners with conservationists to mimic these disturbance events using canopy thinning and prescribed fire in areas that historically saw regular fire. MassWildlife recently worked with the New England Forestry Foundation on a restoration project at Muddy Brook Wildlife Management Area in Hardwick and successfully saw the return of whip-poor-wills to the site after a documented 30-year absence.

As ground nesting birds, whip-poor-wills can be very vulnerable to the presence of dogs and cats, as well as unnaturally high populations of small predators, such as raccoons and skunks, often associated with residential development near their habitat. Declines in nocturnal insects may also be a contributing factor to overall decline.

How you can help?

— Report sightings of whip-poor-wills (especially calling whip-poor-wills) to MassWildlife's NHESP. These recorded observations help their staff to better understand the distribution and status of Whip-poor-wills in Massachusetts, can inform habitat management decisions, and may offer protection under MESA (Click onto www.mass.gov/how-to/report-rare-species-vernal-pool-observations for instructions to submit rare species observations).

— Keep your cats indoors and dogs on a leash. This is not only a good practice to help vulnerable wildlife, but it's also safer and healthier for your pets.

— Support restoration efforts by state agencies and non-profit organizations to conserve and restore the fire-influenced habitats that support Whip-poor-wills.

State and federal environmental agencies will use $8.3 million from the Buzzards Bay oil spill natural-resource settlement to restore common loons and other birds throughout New England that were impacted by the 2003 spill.

They hope to return and increase loons to more water bodies in Massachusetts through the release of 45 to 60 common loon chicks from Maine and New York to historic Bay State breeding sites at Assawompset Pond Complex in Lakeville and October Mountain Reservoir in Washington.

In Massachusetts, common loons disappeared as a nesting bird for decades until 1975, and have since primarily returned to breed in the Quabbin and Wachusett reservoirs and a few other central Massachusetts waters. Some $2,684,500 in funds will be allocated to this project.

Agencies hope to increase survival of nesting loons at many breeding sites across New England and New York. Several types of projects will be selected through a competitive grant process, such as deploying nesting rafts to withstand fluctuating water levels and reduce disturbance from predators and people, installing educational signs and hiring seasonal wardens to watch over nests to reduce disturbance, and preserving land to protect loon breeding habitat. Funds allocated: $3,685,500.

It is hoped that funds will also be allocated to include projects benefiting common eiders and other coastal birds.

So, things are "looking up" for our feathered friends here in the Commonwealth.

A couple of weeks ago, Mass DFW completed stocking the Quabbin Reservoir with its annual allotment of 10,000 landlocked salmon raised at its Palmer Fish Hatchery. It will take about three years for these fish to reach the 15-inch minimum size for harvest.

If you are driving out and about the Berkshires after dark, may I suggest that you slow down and be careful. There have been some moose sightings in rather unusual locations — the back yards of some Lenox residents.