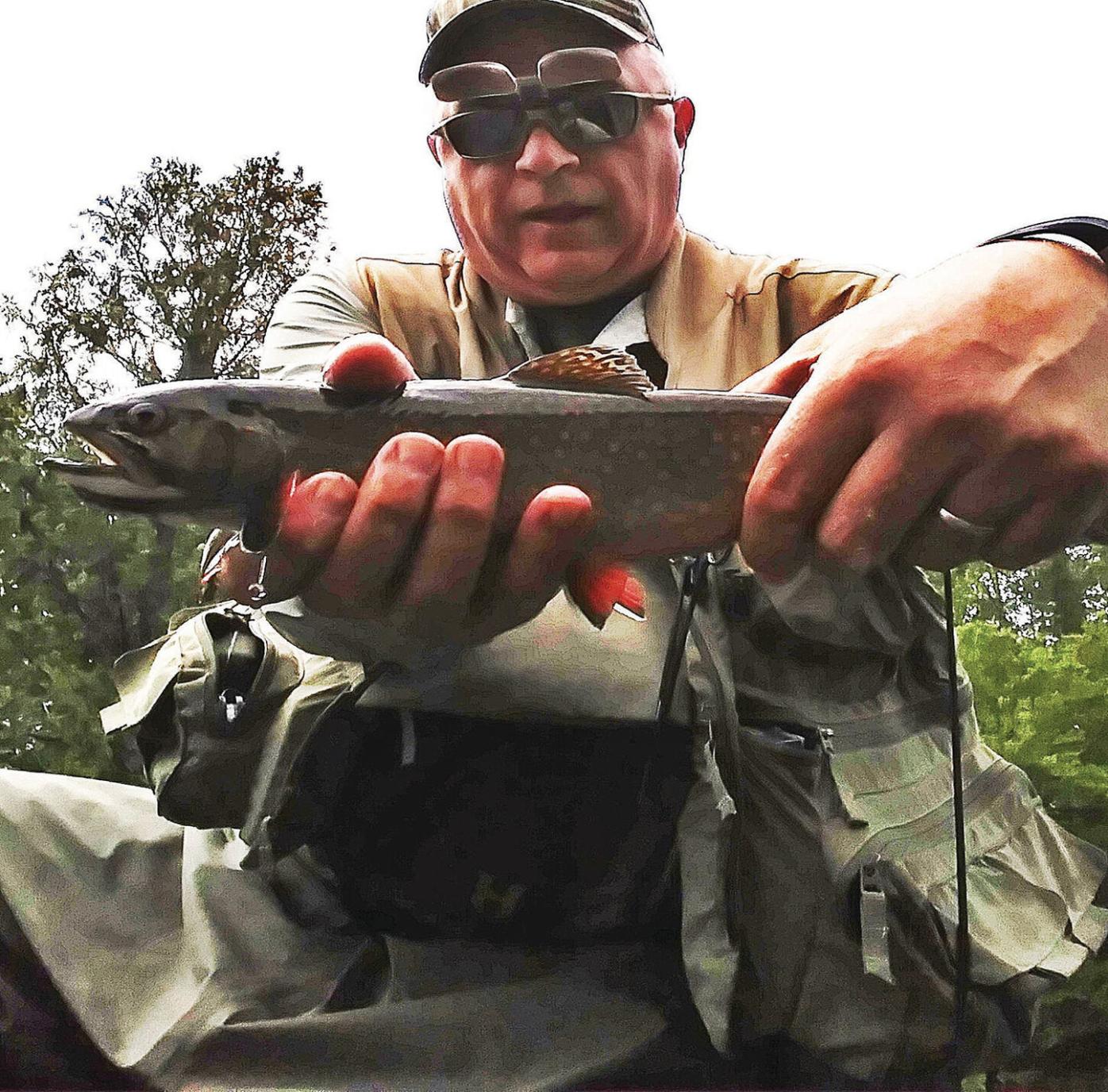 Ron Wojcik holds up a brook trout he caught on a fishing trip to Maine recently. 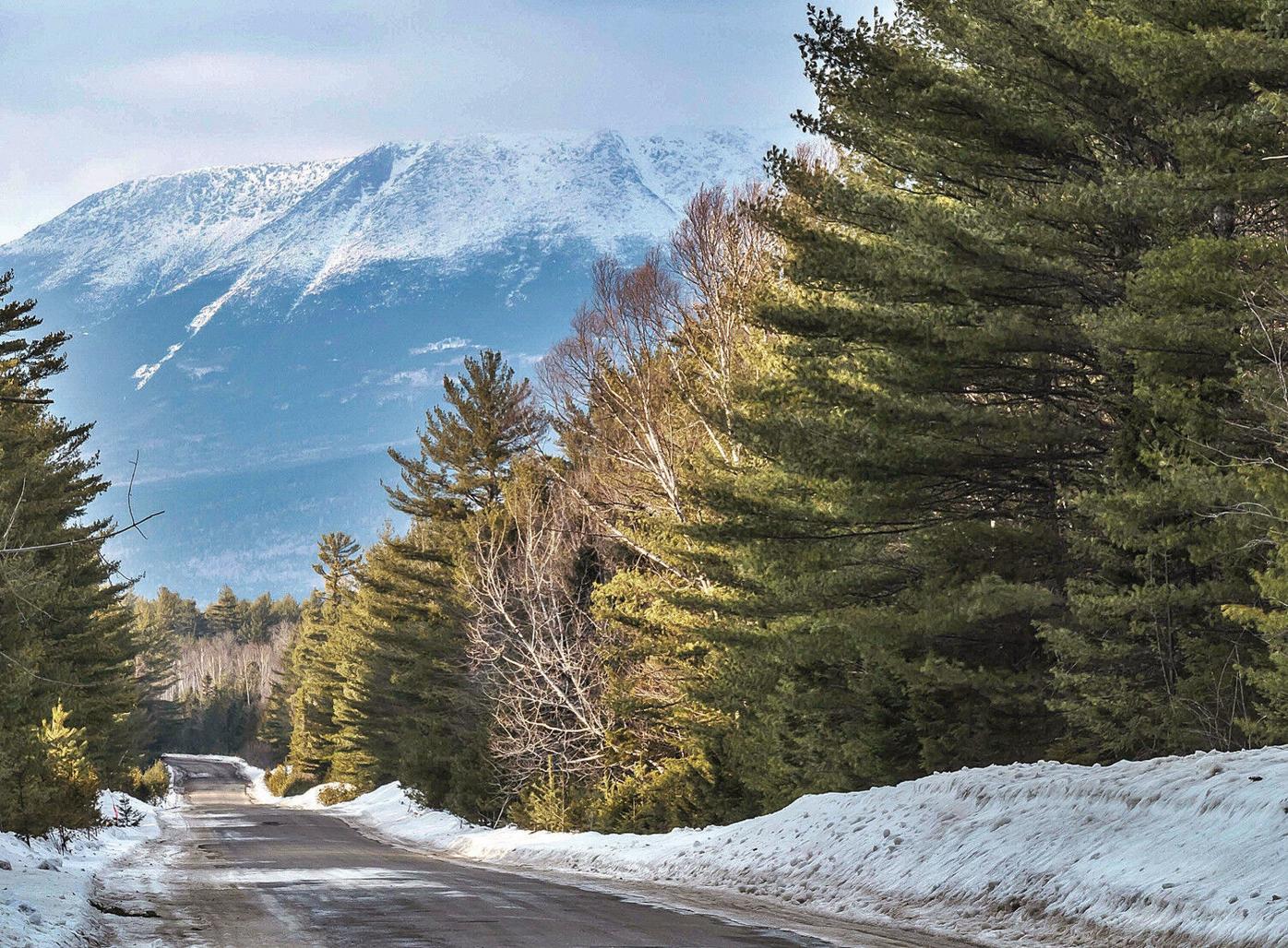 To access fishing spots along the Penobscot River, anglers have to travel down the Golden Road, which has a stunning view of Mount Katahdin. 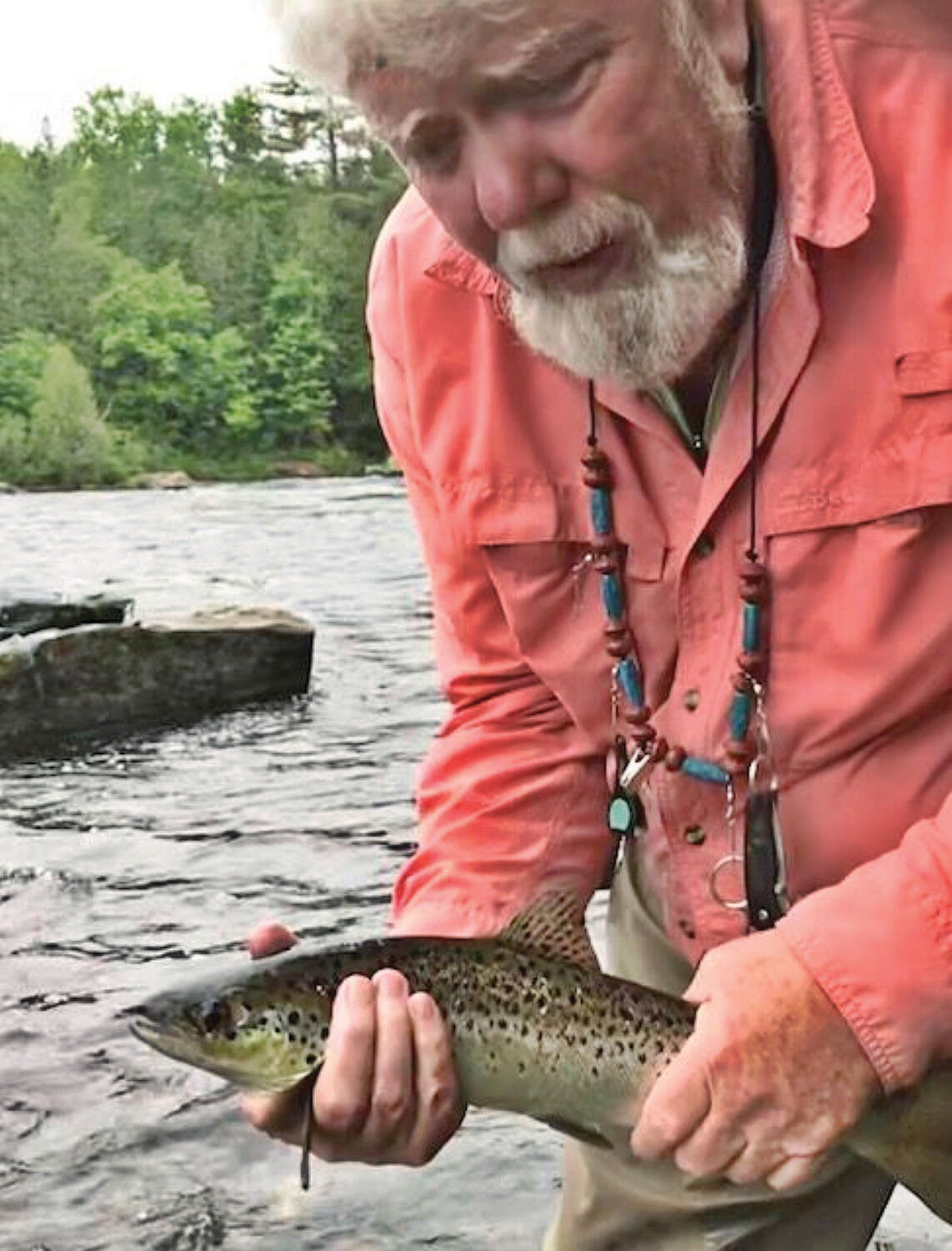 Mike Shepard holds up a landlocked salmon he caught on a recent fishing trip to Maine.

Ron Wojcik holds up a brook trout he caught on a fishing trip to Maine recently.

To access fishing spots along the Penobscot River, anglers have to travel down the Golden Road, which has a stunning view of Mount Katahdin.

Mike Shepard holds up a landlocked salmon he caught on a recent fishing trip to Maine.

Recently, a couple of fishing buddies and I traveled to East Millinocket, Maine to do some fly fishing in the west branch of the Penobscot River. This is a large wild river in upper Maine that is noted for its large wild brook trout and landlocked salmon. In addition to myself, Ron Wojcik, of Windsor, Paul Knauth, of Hinsdale, and Michael Shepard, of Dalton, came on the trip. It is an eight-hour drive from the Berkshires, so we stopped at Cabela's in Scarborough, Maine, approximately half way through the drive to rest and pick up a few fishing supplies.

We rented a cabin at Twin Pines at the New England Outdoor Center on Millinocket Lake in East Millinocket. Each day we drove approximately 30 minutes along the Golden Road, the primary road access to the river, to get to an area below Ripogenus Falls where we knew some nice fish were awaiting us.

Ripogenus Falls once controlled discharge from Ripogenus Lake until Ripogenus Dam (92 feet high and 704 feet wide) was completed at the upstream end of the Ripogenus Gorge in 1916. The dam forms a hydroelectric reservoir, raising the level of Ripogenus Lake to include the upstream Chesuncook Lake, Caribou Lake, and Moose Pond. Hydroelectricity is generated by diverting water at 2,400 cubic feet per second through a mile-long penstock around the former falls.

The west branch once had river log drives transporting pulpwood to a lumber mill in Millinocket. They began in 1917 and the last one was in 1928. Environmental concerns ended river transport of pulpwood in 1971 when the Great Northern Paper Company opened the above mentioned Golden Road. Since then the lumber industry has been greatly diminished and the Millinocket mill is being torn down.

We left home around 5 a.m. and arrived at our cabin around 2 p.m., ate a sandwich and, although a little tired, we were off to the river by 4 or so. We were concerned about the forecast of rain for the next two days, so at least we could get some decent weather to fish on the day of arrival. Once at the river, we realized that in our tired condition and haste, Paul left his rod at the cabin, Ron left his reel there and I forgot my flip down spectacles. Nice start, hey? No problem, we usually take two rods and reels so a little bit of lending and everyone went to the stream fully equipped, except for my spectacles.

They releasing of water made the river level just about perfect for fishermen as well as the commercial rafters and kayakers.

The fishing was outstanding, with many brookies and landlocks caught and released. We left the river early because even though we brought food to cook up in the cabin, we were too tired to cook and decided to eat at a restaurant in the complex where we were staying. The only problem was that it closed at 9, and we had a half-hour ride to get back. We did make it in time.

The weather forecast of rain for the next day was wrong and we had a pleasant and fruitful day, catching lots of cooperative fish. But instead of rushing to eat, this time we stopped fishing around 3 and drove back to the restaurant when it opened at 4. Then it was back to the river and we fished until total darkness, sometime after 9. That was when Ron landed the largest brook trout of the trip, one estimated to be around 18 inches. He caught it on a gray caddisfly in some pretty heavy current.

The next morning, the rain continued to hold off and it was another beautiful day. That was when Mike connected with the largest fish of the trip, a landlocked salmon estimated to be 20 inches. He caught it on a Stimulator (a fly which imitates an adult stonefly).

Once again, we knocked off around 2, went back to the cabin and this time had an early dinner of spaghetti and chicken/sausage prepared by Mike. After gorging ourselves, three of us went out fishing again. Paul's back was giving him some trouble so he stayed at the cabin, cleaning it up so that we could get an early start for home the following morning.

The fishing was slower that evening, although Ron caught several nice landlocks and brookies. Just as we left the river in darkness, it started to rain and rained all night.

It was a beautiful trip shared by good friends. We all caught and released lots of nice fish. Of course, the biggest fish didn't wait to be released, but decided to release themselves, usually taking our flies with them. Those are smart and scrappy fish up there. Once hooked, the landlocks frequently jump three feet out of the water and they no sooner come down and they are airborne again. They are masters at tangling around submerged rocks and cutting your leaders. If you use a heavy leader, the fish won't touch your fly, and if you use a thinner leader, they will take your fly, but usually break you off. It's a Catch-22 situation, but very enjoyable.

It is a tough river to wade. Three of the four of us took spills; I went down twice but Mike had the most spectacular. Ron nearly injured his shoulder with his fall, but none of us got seriously banged up.

One day, we came across Tom Fuller and his wife Pat on the stream. Tom is a fellow member of the New England Outdoor Writer's Association who wrote several excellent fly fishing books including: "Getting Started in Fly Fishing," "The Complete Guide to Eastern Hatches," "Trout Streams of Southern New England" and "Underwater Flies for Trout." We had a nice chat on the riverbank.

At night, we sat around the table having a drink and munching on baked goodies that our spouses baked and sent along with us. Our conversations covered everything from the day's fishing, to troubles with kids today, to the Donald, etc.

The most successful flies were adult and emerging caddisflies, size #16, such as Henryville Specials, Elk Hair Caddis, other caddisfly emergers, Blue Winged Olive mayflies and the Stimulator stone fly. Paul tied up and shared an emerger fly of which the fish couldn't get enough. I'll bet he could have charged $20 apiece for it.

But a fishing trip to Maine isn't all about catching fish. We enjoyed the company of two bald eagles that perched on trees directly across the river from us. At one time, a gull flew by with a fish in its bill. That prompted the eagles to try to take it away, swooping at the gull until it dropped the fish. For the next several minutes, both eagles and the gull flew around us looking for that fish in the waters but they weren't successful.

While on the Golden Road, we frequently observed a mother moose with her young. In the early mornings, we would hear and observe loons paddling along on the quiet lake where we were staying, as we enjoyed views of Mount Katahdin.

Aah, fly fishing with good friends on the Penobscot. It doesn't get much better.

The Checkup for May 7: More than half of Massachusetts adults fully vaccinated