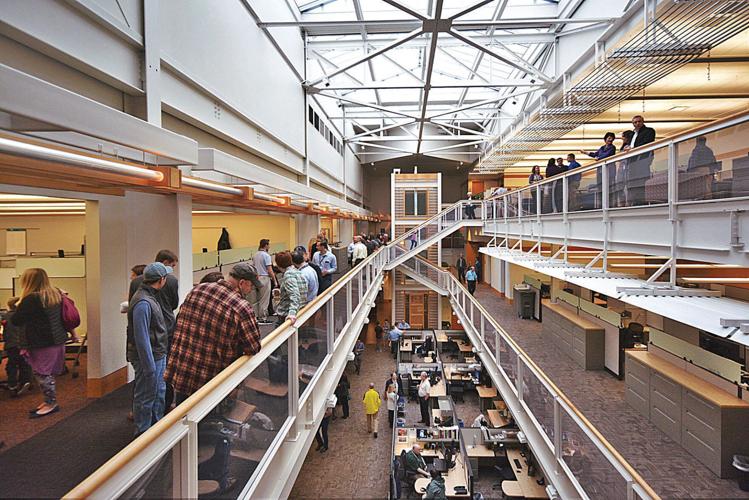 People get a tour of the offices of General Dynamics following a ribbon cutting celebration program on their new location at 1 Plastics Avenue in Pittsfield at the former Sabic Administration Building. Thursday, May 25, 2017. 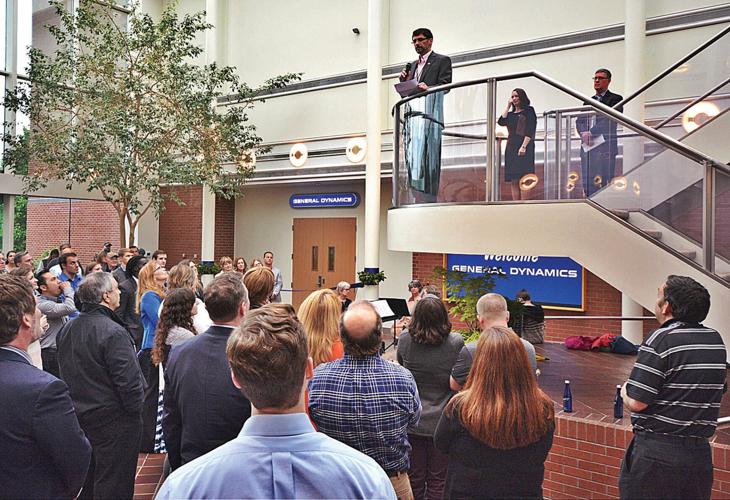 Maritime and Strategic Systems at General Dynamics Vice-President and General Manager Carlo Zaffanella speaks during a ribbon cutting celebration program on their new location at 1 Plastics Avenue in Pittsfield at the former Sabic Administration Building. Thursday, May 25, 2017.

People get a tour of the offices of General Dynamics following a ribbon cutting celebration program on their new location at 1 Plastics Avenue in Pittsfield at the former Sabic Administration Building. Thursday, May 25, 2017.

Maritime and Strategic Systems at General Dynamics Vice-President and General Manager Carlo Zaffanella speaks during a ribbon cutting celebration program on their new location at 1 Plastics Avenue in Pittsfield at the former Sabic Administration Building. Thursday, May 25, 2017.

PITTSFIELD — It may be time to rename Plastics Avenue to something more befitting of the present.

That remark from Mayor Linda M. Tyer drew cheers of support Thursday night, as one of the largest employers in the city celebrated an expanded footprint.

About 170 General Dynamics employees, working on two major surface navy contracts it has for littoral combat and expeditionary fast transport ships, relocated to about 40,000 square feet of newly leased space within 1 Plastics Ave.

They began work there Monday.

"You are a leader of the economy here and in the Berkshires," Tyer said. "We are so proud that you call Pittsfield your home."

They, along with General Dynamics employees, family members and community leaders mingled during a private event.

"There is no business without you. Continue to give the best because that is how we will drive this," Patterson said to the employees gathered. "We hope to be a billion-dollar business. We look forward to outgrowing this building under [Zaffanella's] leadership."

The company has gone from 500 Pittsfield-based employees in 1997 to about 1,400 today. It also has about 60 paid interns on staff this summer.

Zaffanella said its business has grown 14 of the past 15 years. And that steady growth into surface ship contracts for the Navy and, more recently, work for the Air Force has meant more employees who need room to work.

The company also has nearly 100 job openings at its Pittsfield operation, according to company spokeswoman Brenda L. Burdick.

Zaffanella said the company is optimistic it will land two large contracts with the Air Force this summer.

"But even without those we will grow this year," he said.

In an interview prior to the event, Zaffanella said the company considered other locations but ultimately determined the space was an ideal spot. It was most recently occupied by the plastics company Sabic, and formerly part of GE Plastics.

"A short walk across the street into a high-tech space, you can't get better than that," he said. "This gives us more of a campus feel."

The expansion to 1 Plastics Ave. brings the company's total number of sites in Pittsfield to four.

General Dynamics employees are also located in former GE buildings No. 1 and No. 2, on 100 Plastics Ave., and building No. 3 on Merrill Road.

General Dynamics had reorganized and modified its other nearby spaces several times. And company leadership needed to decide it if would modify, again, or take on another site, he said.

Zaffanella explained the move was also designed to improve efficiency for its employees, with people on certain projects now grouped together. The spaces vacated by those employees moved to 1 Plastics Ave. will be used to co-locate other company employees.

Beyond location, Zaffanella said the building was the right fit because it offered information technology and security measures that are required for the company's work.

Zaffanella declined to elaborate on the length of the lease with GE. But he did say the agreement, signed in March, includes a right of first refusal on additional space within the sizable building. While General Dynamics does not have current plans to use more than the 40,000 square feet leased, he said the company isn't ruling that out.

"We are continuing to hire," he said. "We have a very robust backlog of work right now and have several sizable opportunities that we are pursuing. And we could move even more people over there in the future."

He said the expansion has positive implications beyond the company.

"It is a really positive step for not just [General Dynamics] but for the community frankly," he said. "Breathing life into a building that had been vacated, is just a good sign for the Berkshires."

The building has been empty for about five months.

Sabic, which purchased GE's Plastics Division for $11.6 billion in 2007, had leased its administration building at 1 Plastics Ave. Sabic relocated most of its administrative employees from Pittsfield to Houston as of Dec. 31, 2016.