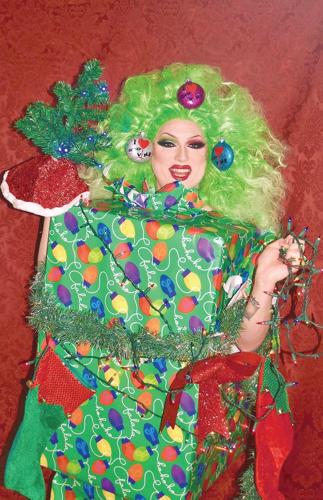 Boxxa Vine's "Dragged Through the Holidays," will be staged Friday Dec. 13 and 27 at The Foundry. 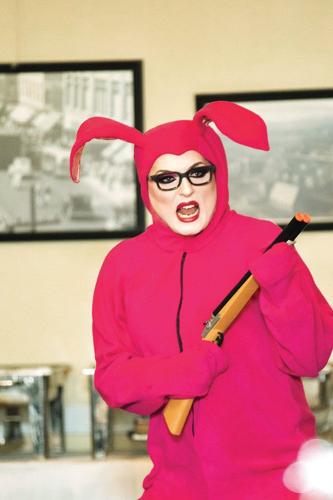 The show will include more than 20 costumes and elaborate wigs. 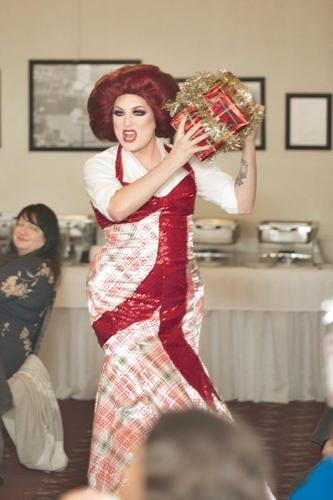 Boxxa Vine (nee Aaron Johnson) lives in Monterey and bills himself as "Monterey's premier, and only, drag queen."

Boxxa Vine's "Dragged Through the Holidays," will be staged Friday Dec. 13 and 27 at The Foundry.

The show will include more than 20 costumes and elaborate wigs.

Boxxa Vine (nee Aaron Johnson) lives in Monterey and bills himself as "Monterey's premier, and only, drag queen."

"This is a 90-minute sit-down, cabaret-style comedy show," said Boxxa (nee Aaron Johnson) of the upcoming show, which will be held at The Foundry in West Stockbridge. "I build a lot of camp stupidity into what I'm doing; you never know what holiday we're actually going to do."

The show will spoof iconic movies, including "A Christmas Story" and parodies hits like Frozen's "Let It Go." It's rated PG-13 for some language and suggestive humor.

Boxxa has long wanted to do a show on this scale. Self-billed as "Monterey's premier, and only, drag queen," Boxxa established a Berkshire drag presence through pageants, picnics and bingo.

He caught the acting bug as a youngster in Colrain, and attended theater arts school. Spending four years with Disney in Florida honed a unique set of performance skills.

Boxxa became immersed in the local scene when he joined his family in Monterey in 2011.

Boxxa — as Aaron likes to be called — is relaxed about preferred pronouns, typically "she" in drag, "he" out of drag.

Boxxa's personae first surfaced six years ago. "I started experimenting [locally], then went to Florida and New York City. I bounced around a lot."

His first Berkshire appearance was at a Great Barrington diner in 2014, followed by a sold-out 2015 Monterey show, plus regular gigs at Otto's and Fuel.

But presenting area drag events is not always easy. A municipality delayed issuing permits, according to Boxxa, and some venues balked at promotion. Still, annual events such as Berkshire Pride and Colonial Theatre's Miss Berkshire pageant remain popular.

"Part of The Foundry's mission is to have diverse programming and offer a platform for emerging artists who don't have venues to perform in," Brentano said. "And I love drag."

Concerned drag artists were not being supported, Brentano invited Boxxa to stage a holiday show. When promotional photos arrived, "we were screaming," Brentano recalled. With faster advance ticket sales than any other Foundry show, Brentano has added a second performance on Friday, Dec. 27.

"Boxxa does her own costuming and is really talented," said Brentano, who hopes to host drag makeup workshops one day.

"I have so many holiday costumes," Boxxa said, "and I'm making quite a few more for this show."

With self-taught sewing skills, Boxxa realized early on he could never find or afford to custom-order all his "crazy ideas." Ever resourceful, he empties Springfield wig clearance racks, and builds costumes from quality Country Curtains fabric.

He recently spent two months working in a New York designer's costume studio — "[once] all I did was hem ruffles for eight hours" — but still found time to create baby Wolfman and Thanksgiving Turkey costumes for niece Mahala.

"I think he's very talented, he's making the thoughts in his head come to life," Michael Johnson said. "We encouraged both our children to follow their dreams."

The family's attitude was, "we might as well see if this is going anywhere," Boxxa recalled.

As it can be hard to find out what's going on locally, Boxxa would like a more visible outlet for Berkshire Pride scene activities, instead of relying on word of mouth.

"We're putting on real theatrical shows, not just [what's] in clubs," he said. When it comes to culture, with so many city people, "the Berkshires isn't normal."

Going forward, the show "sets a standard to expect," Boxxa added. "I'm already keeping my mind on where this could go next."