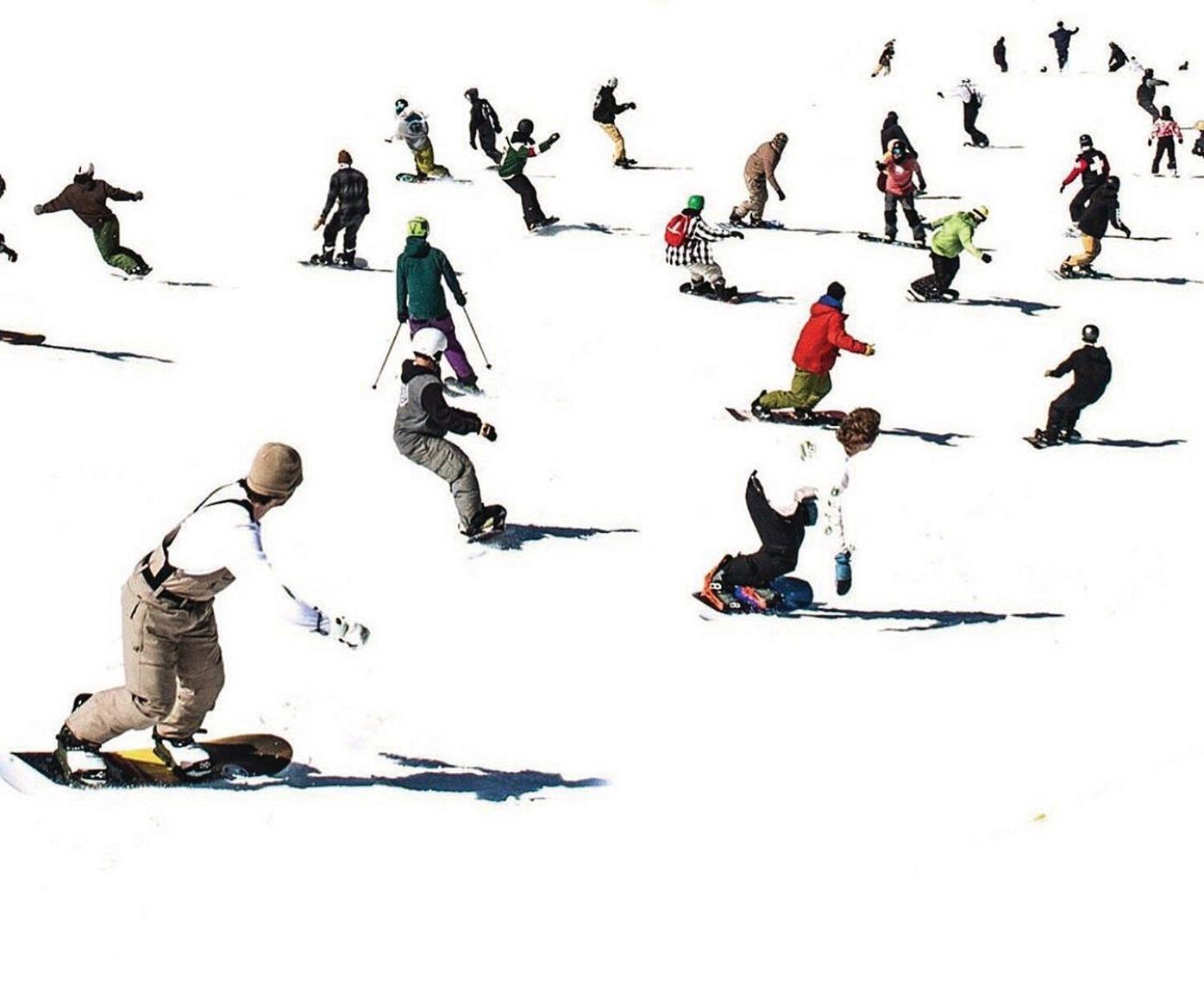 A large group of snowboarders take a group ride in honor of the late Jake Burton Carpenter on March 13's Day for Jake celebration at Boreal Mountain in Tahoe, Calif. 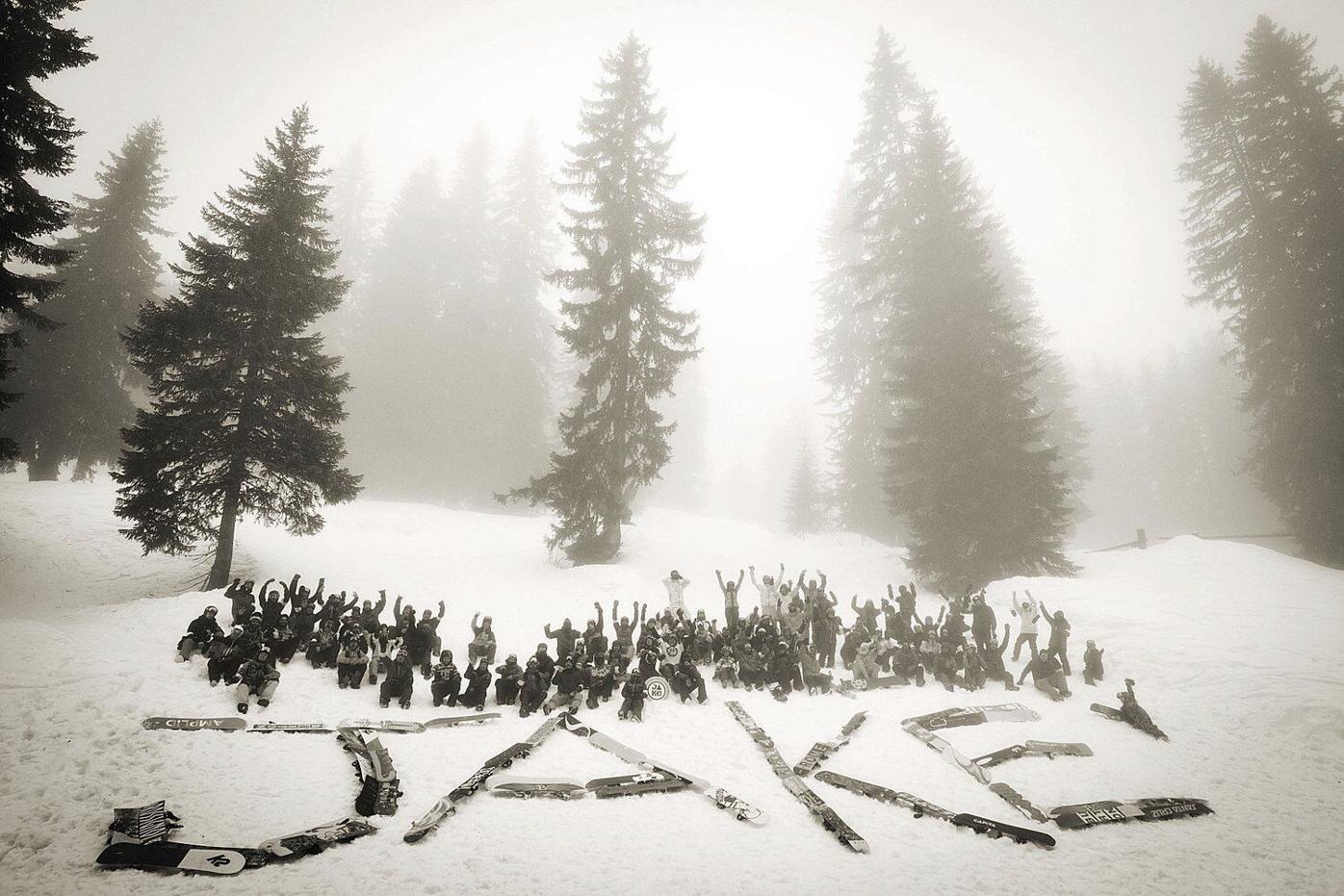 The name Jake is spelled out in snowboards in honor of Jake Burton Carpenter on March 13 at the Avoriaz ski resort in the French Alps.

A large group of snowboarders take a group ride in honor of the late Jake Burton Carpenter on March 13's Day for Jake celebration at Boreal Mountain in Tahoe, Calif.

The name Jake is spelled out in snowboards in honor of Jake Burton Carpenter on March 13 at the Avoriaz ski resort in the French Alps.

He didn't take no for an answer when the skiing world balked at the idea of standing sideways on one plank and carving down a mountain.

Likewise, following his passing in late November, the company and sport he created refused to hit canvas, despite taking body blows from the coronavirus, economic fallout and weather conditions.

On March 13, all around the globe, snowboarders — many wearing branded apparel or riding Burton boards — strapped in atop mountains and made a ceremonial ride down for Jake.

"After he passed, a lot of really good ideas were coming across from Burton employees, from the snowboarding community, just on how we could honor him and not only celebrate his legacy, but keep paying his spirit forward," said Jeff Boliba, a 20-year veteran of Burton and the vice president of global resorts. "That's how the 'Day for Jake' was born."

Six years ago, some high school buddies and I piled into a car and took off northwest from Hampton Beach on a Heady Topper pilgrimage to upstate Vermont. We didn't have much planned beyond acquiring the elusive Alchemist suds and camping out near Waterbury. The issue was, this was late October in New England, and Coleman tents don't supply much insulation from 35-degree nights.

Of course, packing warm didn't occur to a group of dudes in their early-20s.

Luckily, while killing time between our farm tour cheese tasting and copious beer samples, we stumbled upon the Burton Flagship Store in Burlington. Growing up I fancied myself somewhat of a rebel, and Burton stuff was always too popular for me. I rode a second-hand Original Sin in Liquid boots and idolized Danny Kass. So that night I purchased my first ever Burton gear; a "You Shreddy?" beanie and base layer pants.

Jake may have very well saved my life that night, so a few weeks ago, I was glad to be able to help honor his.

Boliba, who spent more than a decade working closely with Jake, along with Zach Nigro, Kim Smith and Dana Basch formed the brain trust which came up with the global ride day. The goal was to create a snowboarding holiday.

"It took a while, there were some really rad ideas," said Boliba, who opted to focus on about 13 key spots under the time crunch of six weeks to get it done.

The bigger obstacle, though, was convincing a bunch of resorts to part with free lift tickets on a Friday during what was likely spring break.

The first owner to step up was Steve Kircher of Boyne Resorts — Big Sky in Montana and Boyne Mountain in Michigan.

"He thought about it for a second and said it was 'a big ask, but you know, Jake has done so much for the sport, so much for our business and so much for the industry. And you guys have always been great collaborators, we will support it,'" Boliba told me. "And so, bang, that was the first one. I just needed someone to latch on to."

In the U.S., Bear Mountain in California, Big Snow American Dream in New Jersey, Boreal Mountain in Tahoe, Copper Mountain in Colorado and Snoqualmie in Washington joined Big Sky and Boyne, but there was one mountain that Boliba circled at the outset of all this.

"I told everyone that the single most important resort out of this entire group is Stratton," he said. "That was my No. 1 target. I am so thankful, because that was the place that let Jake take the lifts, build a snowboard school, rent boards. Really build a sport and build a brand. If you take Stratton out of this equation, I mean, I don't even know if we would be where we're at."

An Alterra resort, Stratton came on board with the riding mecca of Bear Mountain. The relationship between the southern Vermont peak and Burton goes back to the early 1980s, when Jake convinced Stratton to let snowboarders share the slopes. There is now a dedicated sign declaring the site of his creation with the hashtag #RideOnJake.

After he passed away at the outset of this new season, on the first day lifts ran at Stratton, a Burton board was placed on the first chair and it made the journey up by itself, a tribute to the Godfather.

"It was all an internal thing at Burton, they reached out two or three months beforehand," said Andrew Kimiecik, marketing communications specialist at Stratton. "This was the first place that allowed snowboarding. He tested his boards here, the first prototype on Suntanner, he had to convince the ski patrol and everybody. He inspired it all and this was the home of the US Open for a while."

Burton went about setting up the website, locking down tickets and commitments and designing logos for stickers and armbands.

"For me, it was really therapeutic," said Boliba, who credited the entire Burton staff with working extra to put it all together. "Jake battled testicular cancer, came back. He battled the autoimmune disease, which was gnarly, and then came back. When he let us know, in October or early November, he said 'Hey, unfortunately the cancer is back, but I'm gearing up for another fight,' and then literally a couple weeks later he had passed away.

"That was hard. This whole process of planning the event and wanting to make it really amazing, and remembering all these memories, was very therapeutic. It was really inspirational."

But the difficulties were just beginning. Days after settling with the full slate of mountains, the novel coronavirus struck.

"Seriously within three days, the resort we had in China, the outbreak happened, so we had to shift it," said Boliba. "Then two weeks later it was in Japan, shift that. Then it happened in Italy, and then Austria and a couple days beforehand we had to pull the plug at Snoqualmie, because of COVID-19 in Seattle. Then we lost Cypress the night before."

The dominoes kept falling and hurdles kept coming, but the snowboarding community, which is built on the shoulders of Jake Carpenter and Burton, has never been a stranger to obstacles.

"Numbers-wise, the turnout wasn't quite what we expected," said Kimiecik, who noted Stratton sent out 2,000 passes. "It was down-pouring and foggy, and the first day of the Vermont Open had to be canceled for the virus on top of that, but it lent this really cool vibe.

"The hard-cores still persisted, and that put a big smile on my face."

According to Boliba, Stratton was no doubt where the die-hards were headed.

"Stratton sold out, by far, the fastest in the world. It was a matter of hours, and then Copper was second. It was amazing. We went live and literally I checked in with our web crew and they're like 'dude, Stratton is almost sold out.' It was really neat to see," he said. "We were still able to pull it off, and I am so thankful, because the turnout was great. In some cases there was an Apres component that we had to cancel because no indoor gatherings, but everyone still got to take a run for Jake."

While the snowboarding community flocked to specific hills, there was another more intimate ceremony taking place up at Jake's home mountain of Stowe.

Stowe is one of the biggest mountains in the northeast, but there was one trail in particular that held a special place in Carpenter's heart.

"He didn't talk about it very much, it was a green run, but he loved it," said Boliba of 'Lullaby Lane,' which was dedicated as 'Jake's Run' that day.

"Dude, it was 100-mile-per-hour winds at the top, pouring rain, they could only run the triple, so thank goodness it was accessible from there. We pulled it off. But between COVID-19, the weather, all these challenges, it was difficult, but at the same time some of the most rewarding work a lot of us have ever done, because it was for Jake. to celebrate his legacy.

"And we feel like this event is going to become one of the staple events in the future for Burton."

As for the company's current state amid the global pandemic that brought an abrupt and premature end to the winter season worldwide, Boliba sounded confident.

"It's tough, when you have to close stores, and resorts just aren't operating," he said, noting Burton is in a much more stable position than during the 2008 recession. "We have a solid leadership team, really good plans. My resort team is the best I've ever had. We're working to be as frugal as we can, because we don't know what the future holds.

"I mean, I do know this. I do know that the world will recover, and we will beat the shit out of the coronavirus. But what's not known is how long is that going to take?"

On the bright side, a ray of hope.

"I will say this, after many weeks of just taking low blows left and right — we've been dealing with this since January — China is starting to rebound. We have what we consider a Burton hub; a flagship retail store, office and showroom, in Beijing that we had to close down. We just reopened it last week. That's a good sign."

In the meantime, Burton has dedicated itself to the Burton Blog online, where Boliba is pouring his team's time into indoor physical education through a snowboarding program kids can do safely at home.

Getting kids active and into snowboarding was always high on Jake's list, and it's not hard to think about how he'd be utilizing this inside and backyard time.

"The love and the out-pouring that we've received since Jake passed, has just been incredible. From all over the world. That's the thing that still gets me, his impact around the world is phenomenal. It's not just a snowboarding thing. He's brought so many people together, built a culture and community that is going to live on forever," Boliba finished. "It's really powerful to think about."

Mike Walsh is an urchin snowboarder, who can be found at mwalsh@berkshireeagle.com or in the local lift line.