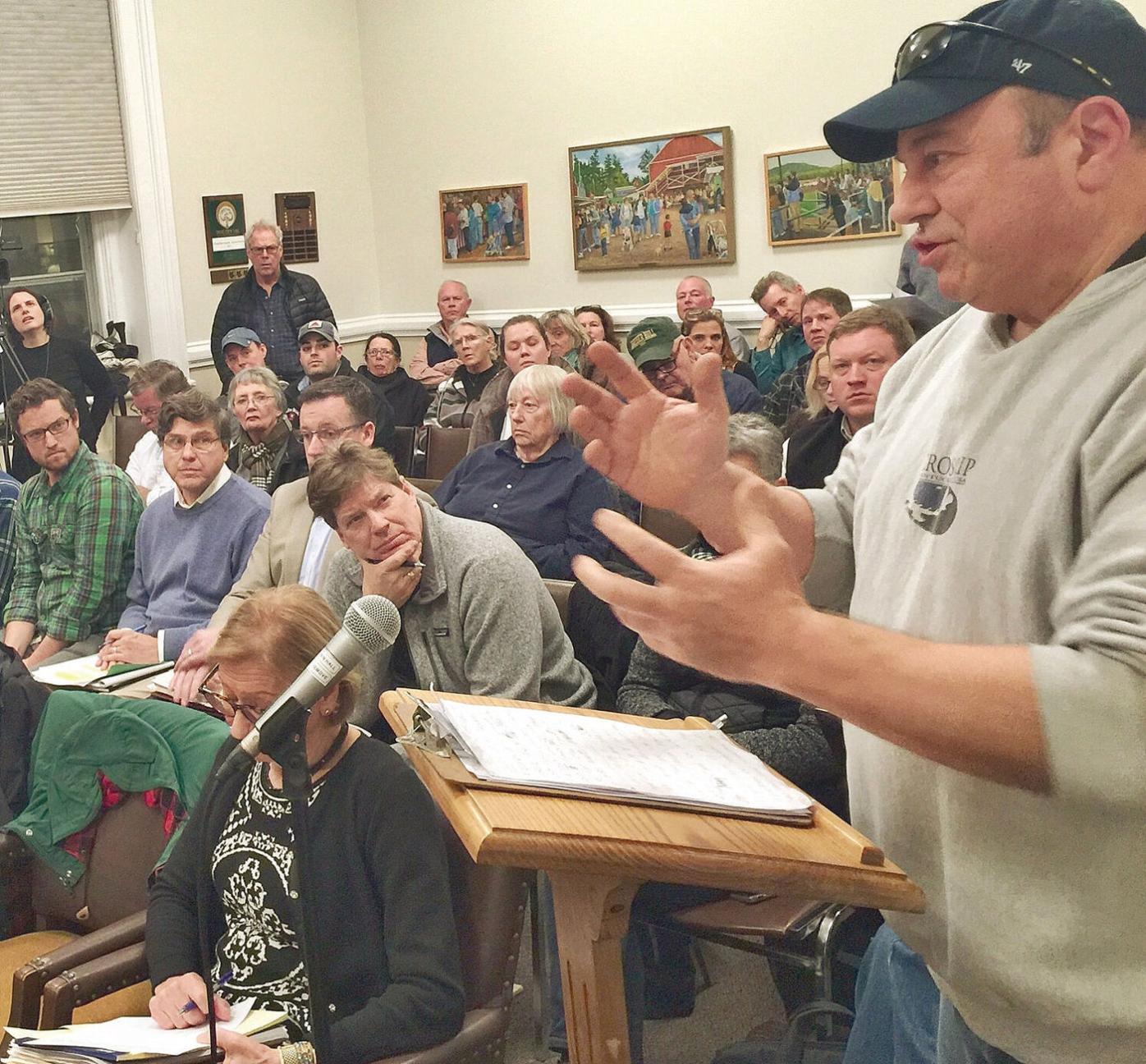 Ed Domaney, owner of Domaney's Liquors and Fine Wines in Great Barrington, urges the Select Board on Monday to vote against giving out the remaining four beer and wine licenses. 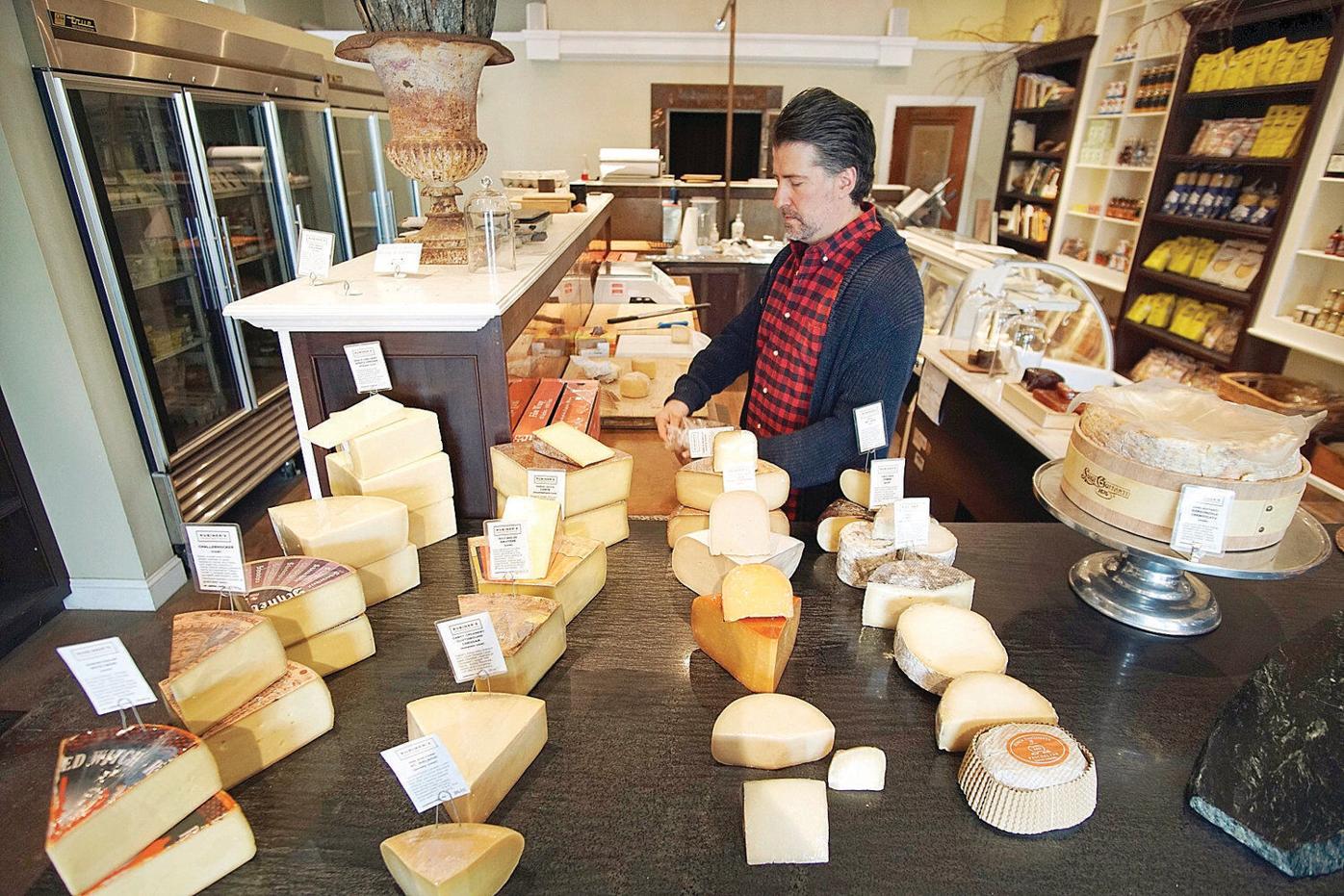 Matt Rubiner will now be able to sell wines and spirits at his shop, Rubiner's Cheesemongers in Great Barrington. 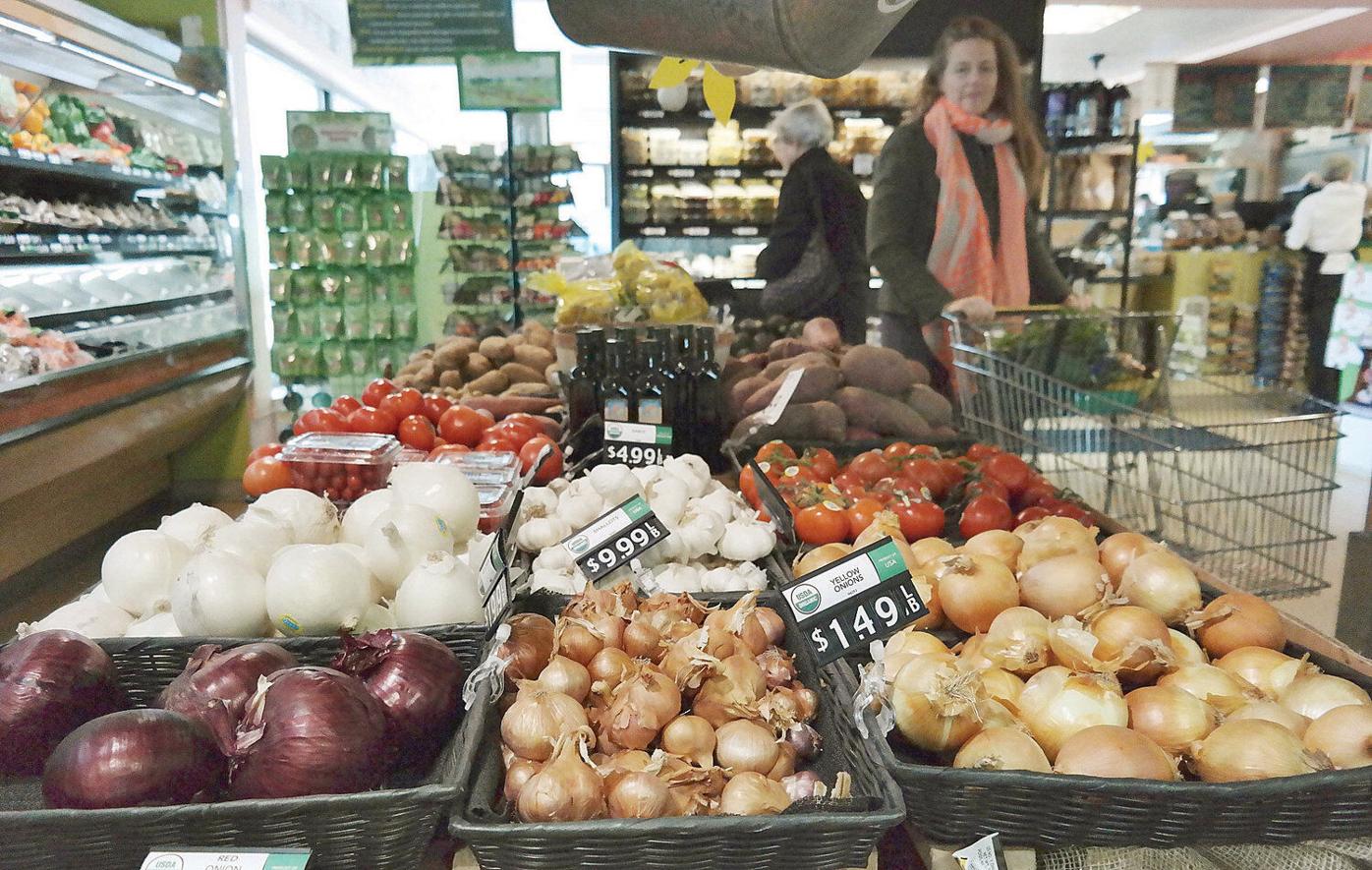 The Berkshire Co-Op Market, shown in 2015, will have a full liquor license when it opens at its new, expanded Great Barrington location in the spring. 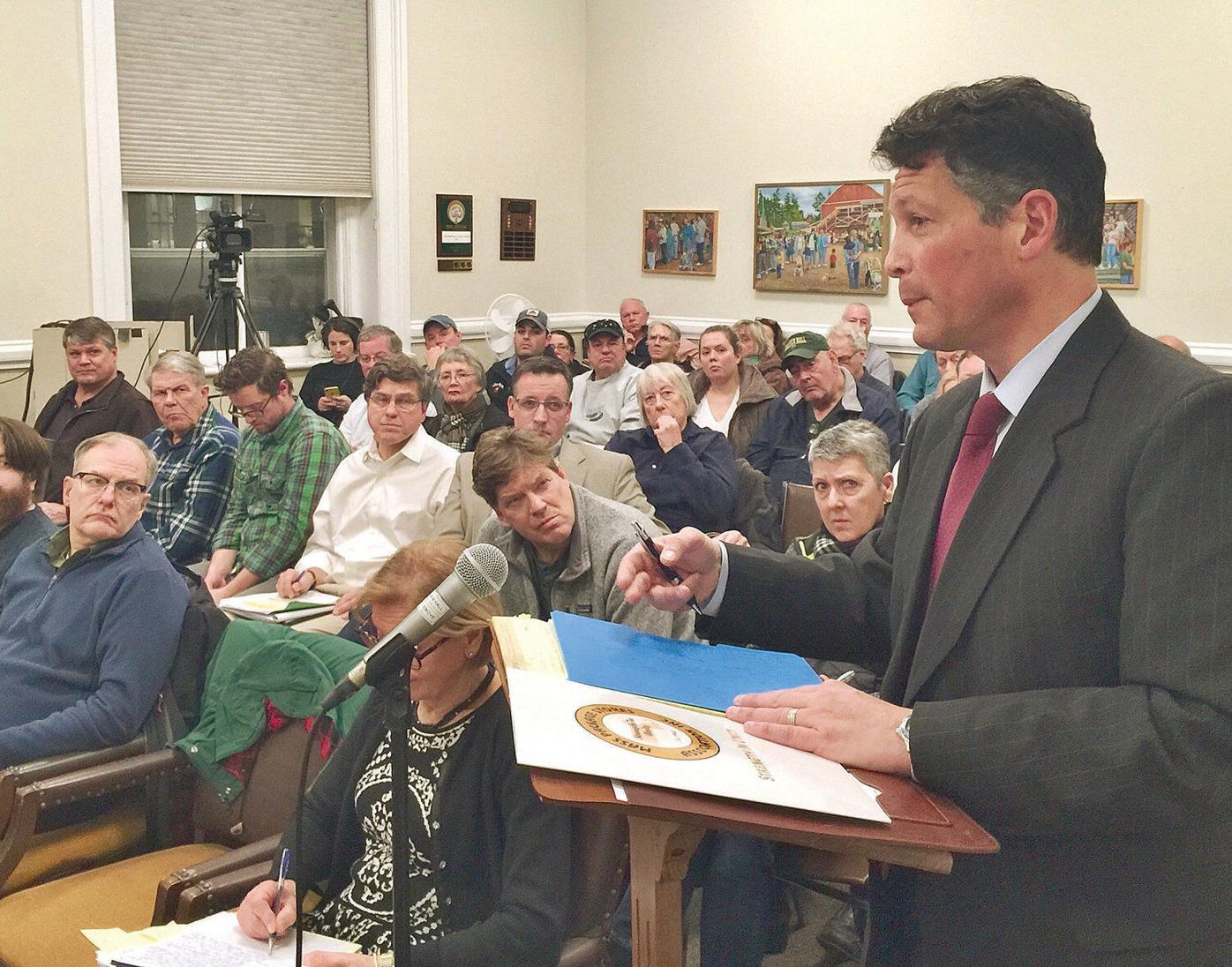 Robert Mellion, executive director and general counsel for the Massachusetts Package Stores Association, tells the Great Barrington Select Board on Monday they should not release the remaining beer and wine licenses.

Ed Domaney, owner of Domaney's Liquors and Fine Wines in Great Barrington, urges the Select Board on Monday to vote against giving out the remaining four beer and wine licenses.

Matt Rubiner will now be able to sell wines and spirits at his shop, Rubiner's Cheesemongers in Great Barrington.

The Berkshire Co-Op Market, shown in 2015, will have a full liquor license when it opens at its new, expanded Great Barrington location in the spring.

Robert Mellion, executive director and general counsel for the Massachusetts Package Stores Association, tells the Great Barrington Select Board on Monday they should not release the remaining beer and wine licenses.

GREAT BARRINGTON — It took 15 years, but Matthew Rubiner finally got his wine and malt license — a decision met with applause by some at Town Hall.

But package store owners, fearing that the move will cut into their profits, were silent.

The Select Board on Monday issued wine and beer licenses to Rubiner's Cheesemongers and Grocers and the Berkshire Food Co-op, expanding the number of licenses in the community for the first time since Rubiner's initial request in 2003 prompted the town to enact a policy to hold back further approvals.

It was a unanimous Select Board decision in 2003 that ruled against releasing four wine and malt licenses, though those are approved by the state. On Monday, the board also voted to rescind that policy, fearing that it runs afoul of state law — and the will of town voters at two subsequent town meetings.

Rubiner and Co-op representatives say they are trying to run robust businesses in a difficult economic atmosphere.

Rubiner's wants to sell roughly a table's worth of rarefied biodynamic wines to pair with cheese and charcuterie. And the Co-op, anticipating an early spring opening of its expanded operations, plans to add 8 feet of shelving for wine and 4 feet for beer, both organic and small-production.

But long-established package store owners are worried about any dent that even such limited sales could make in their sales.

"Putting more [licenses] out there makes everything worse," said Joe Aberdale, owner of Aberdale's in Housatonic.

With an overflow crowd at Town Hall, and plenty of lawyers, it was an evening of politics that revealed the hardships of the small-business owner, who, in a rural economy, relies on the seasonal swell of tourists.

And this is why the town's alcohol license policy got mangled over the years. It's likely the reason that in 1983, voters at annual town meeting agreed to convert seasonal licenses to year-round, all-alcoholic licenses, resulting in the current seven all-alcohol licenses instead of what the state says should be two, given the town's population.

And it's also the reason why, 20 years later, the board clamped down on the four wine and malt licenses that technically remained, since the state Alcoholic Beverages Control Commission says the town can have five of these.

That was 2003, about the time that Rubiner had applied for one of them and was denied on the vague grounds, he has said, that the town had enough package stores.

In 2004, voters at town meeting and a special town meeting said they wanted the four beer and wine licenses released.

So, this continued clampdown has thrown up a legal question.

"Our policy is considered an arbitrary roadblock that would not stand up [legally]," said Select Board Chairman Stephen Bannon, who voted against both license applications.

He said that if the policy had been changed at this meeting, he would have supported the applicants, both "fine establishments." But that without a sound policy, he would reject these two applicants and those after that, no matter who wanted one.

"We had a gatekeeper, and that was our policy," he said. "It may not have been legal, but no one has challenged us on it in 14 years ... I'm going to be consistent here, so that the stories that come into town that we really don't want — not these two — I will still continue to vote no."

Board Vice Chairman Ed Abrahams, who with board members William Cooke and Kate Burke voted in favor of granting the two licenses, said the current policy discriminates.

"The policy that we had keeps people out who can't lawyer up and go to Boston and challenge us, whereas, it doesn't keep out somebody with a lot of money," he said.

Casting aside the unfair competition argument wielded at previous hearings, package store owners hit hard instead with the notion that they alone are skilled at keeping crafty teenagers from scoring alcohol with fake IDs. But Co-op attorney Dennis Egan brushed off this logic, which assumes that no one else can be trained to do this.

"The industry is stressed ... this year's revenue was flat," he said, adding that the decline is linked to young people choosing cannabis over drinks, and the proliferation of breweries.

"Cannabis is taking 6 to 15 percent of their sales," he added.

Potential conflicts of interest were revealed at the start. Earlier Monday, Abrahams and Cooke had, rather than recuse themselves, withdrawn their Co-op memberships to clean up ties to the natural foods grocer, in a move cleared by the town's attorney.

Burke disclosed that, in the past, she had worked for one of the establishments.

But board member Daniel Bailly mocked Abrahams and Cooke over it, saying they could turn right around and reinstate their Co-op memberships "tomorrow."

"I ask that you look at this objectively," he said. "Forget that these people are your friends, or what your social circle might say if you voted it down."

"It is not our job to protect ... one class or one group, or one individual store over another; that is not what we do in capitalism to limit clothing stores or anything else because we favor somebody who we've known and grown up with versus somebody who is new in town."

Rubiner had previously said that he simply wanted to be able to sell wine to complement his cheese sales, just as the town's package store owners sell cheese to complement alcohol sales.

Co-op board of directors member Daniel Seitz said the Co-op isn't trying to compete to the detriment of package store owners, and wants to sell beer and wine at the request of its members, as a one-stop-shopping service. But he acknowledged that there might be a little competition.

"We will be a very minor irritant, if an irritant at all," he said.