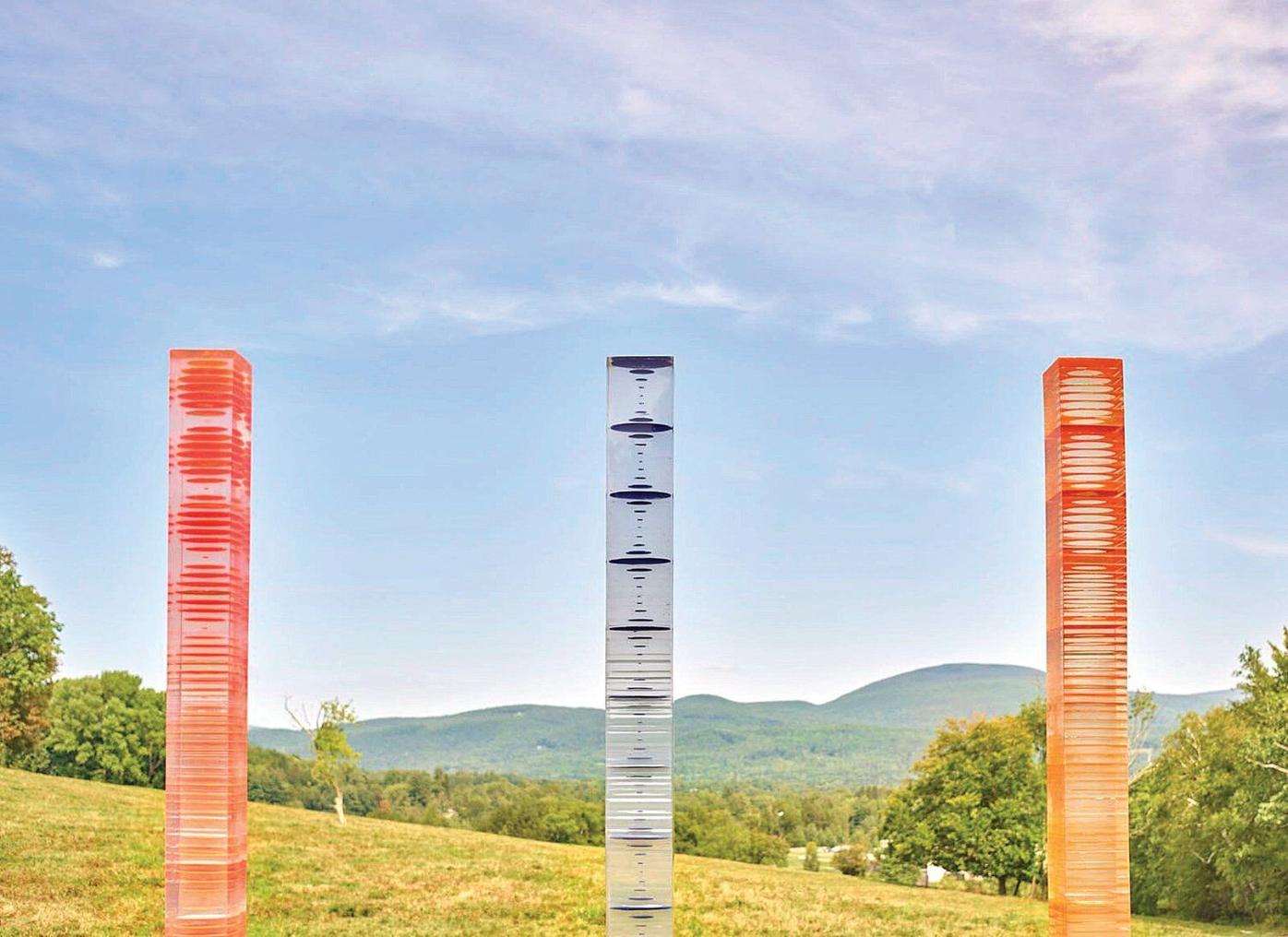 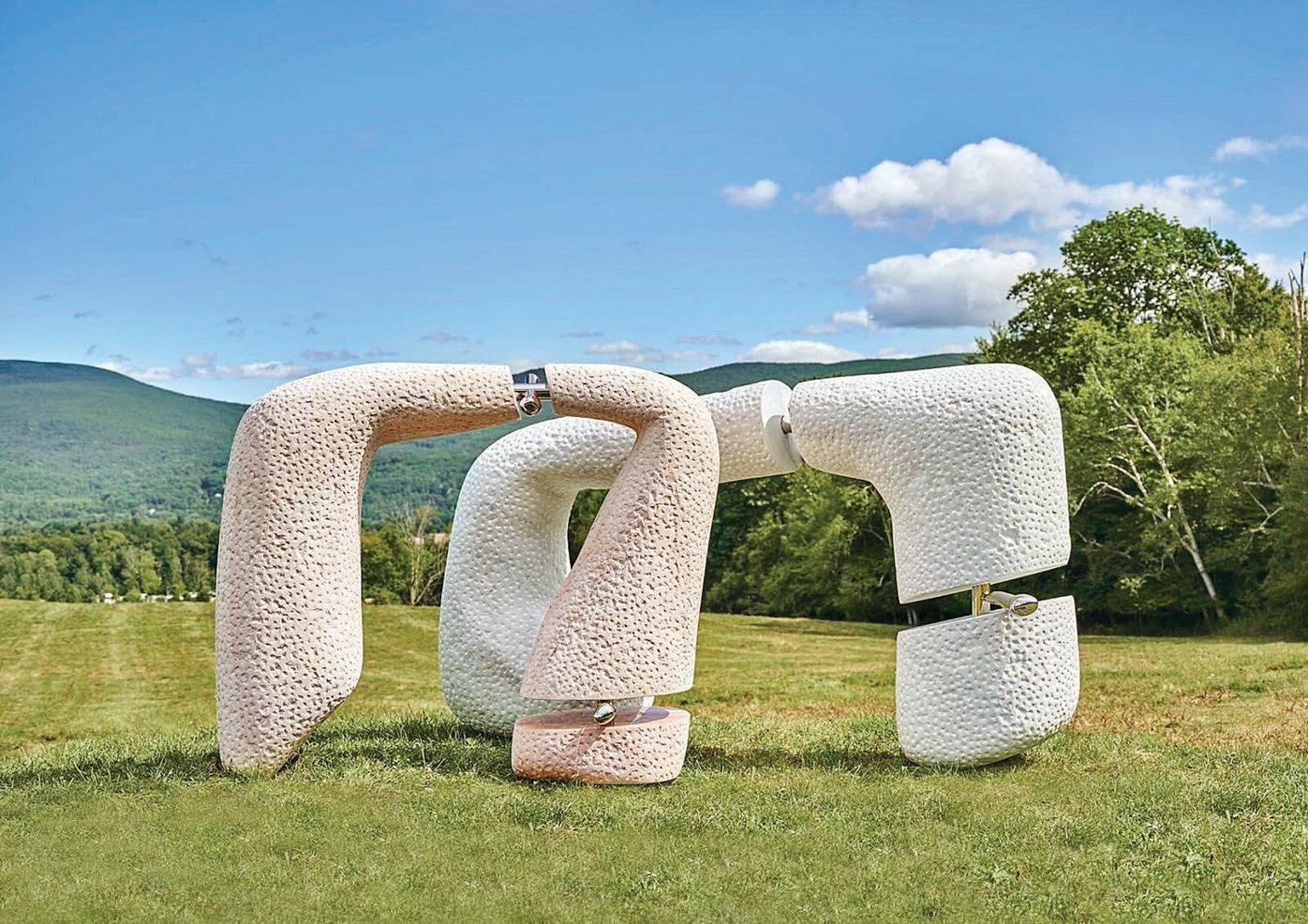 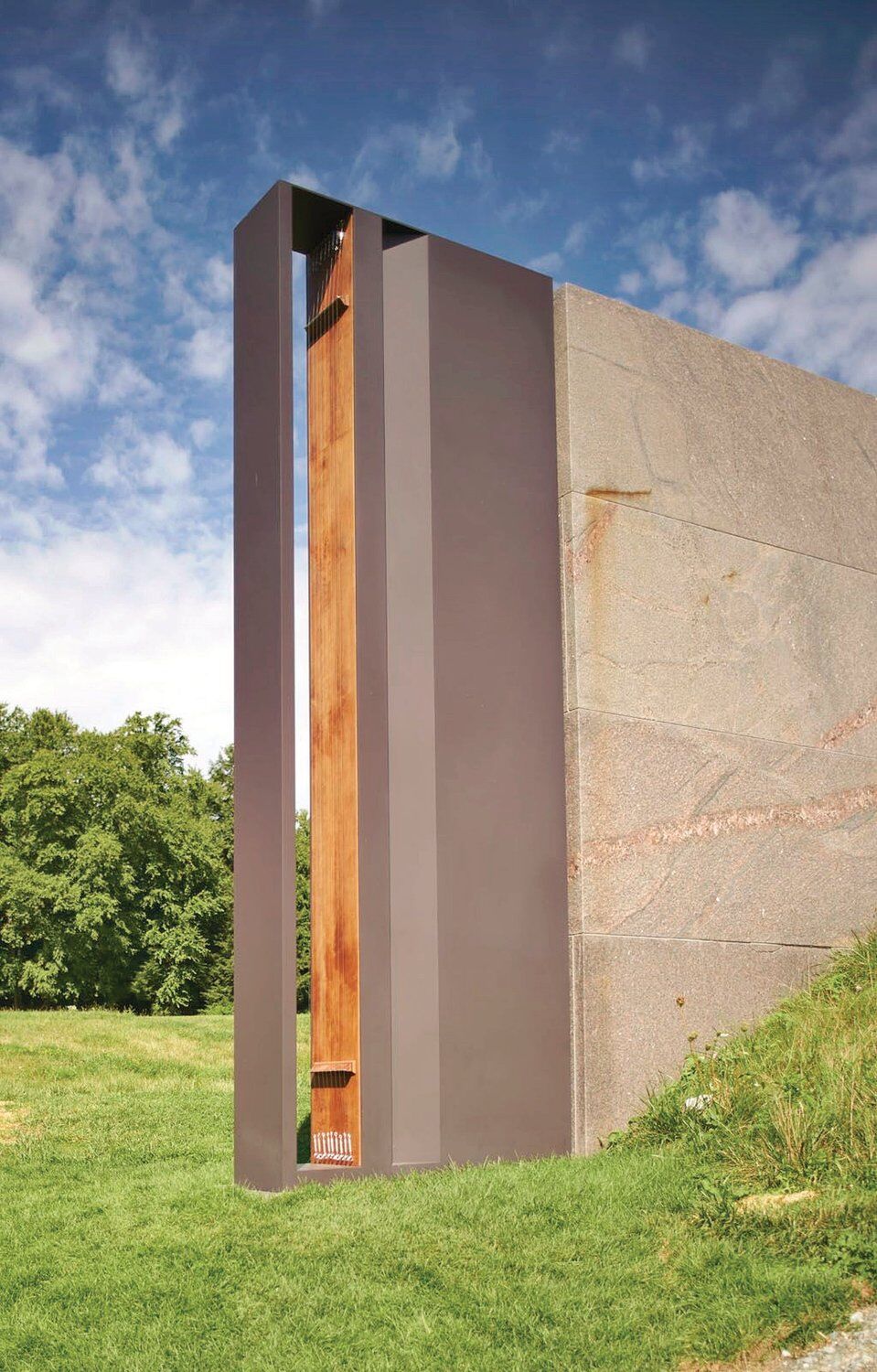 Artist Jennie C. Jones, who lives and works in Hudson, N.Y., created the sculpture, "These (Mournful) Shores" for the exhibition, "Ground/work." 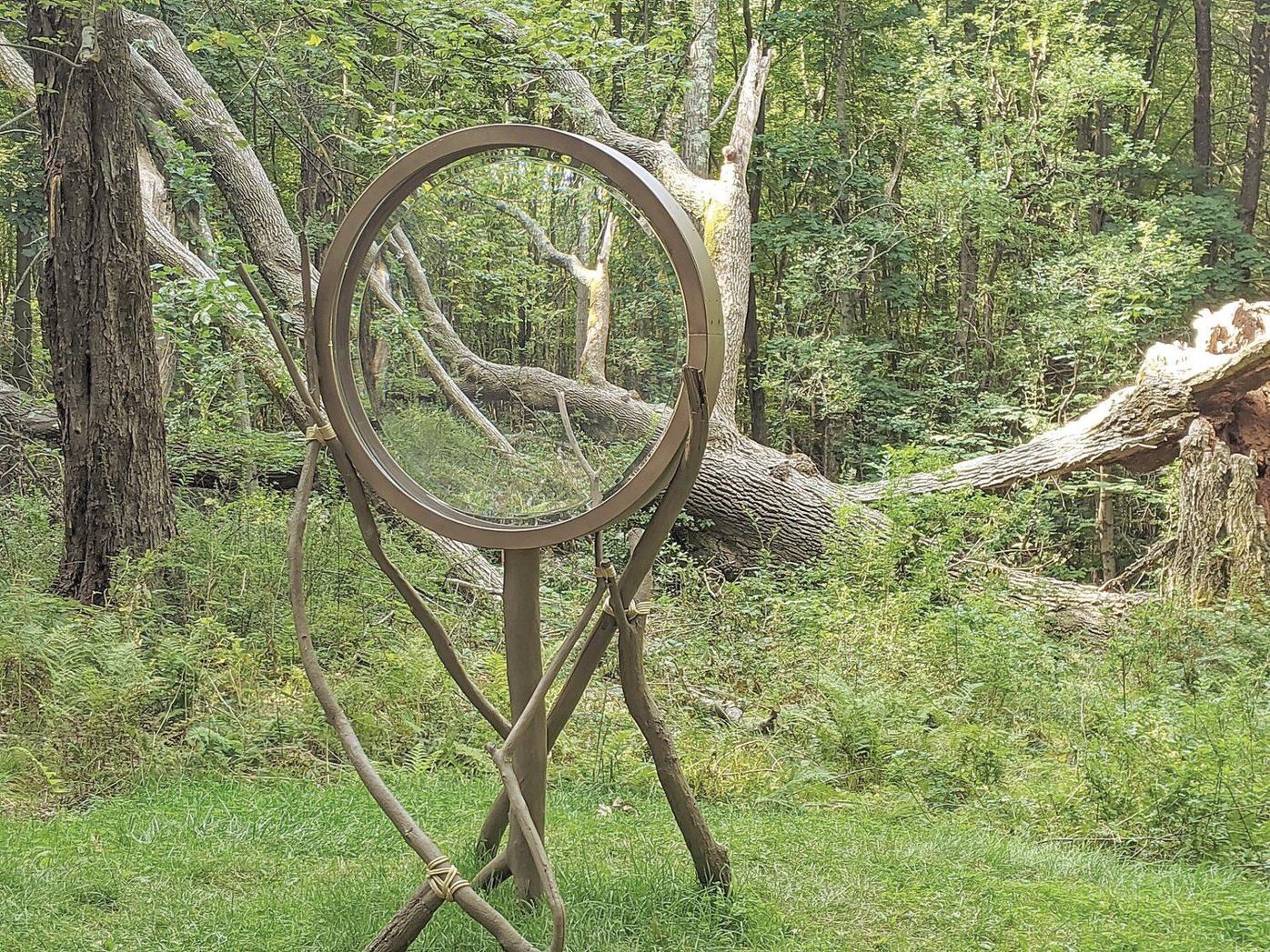 Kelly Akashi 's "A Device to See the World Twice" is located on the Stone Hill bench trail at The Clark. 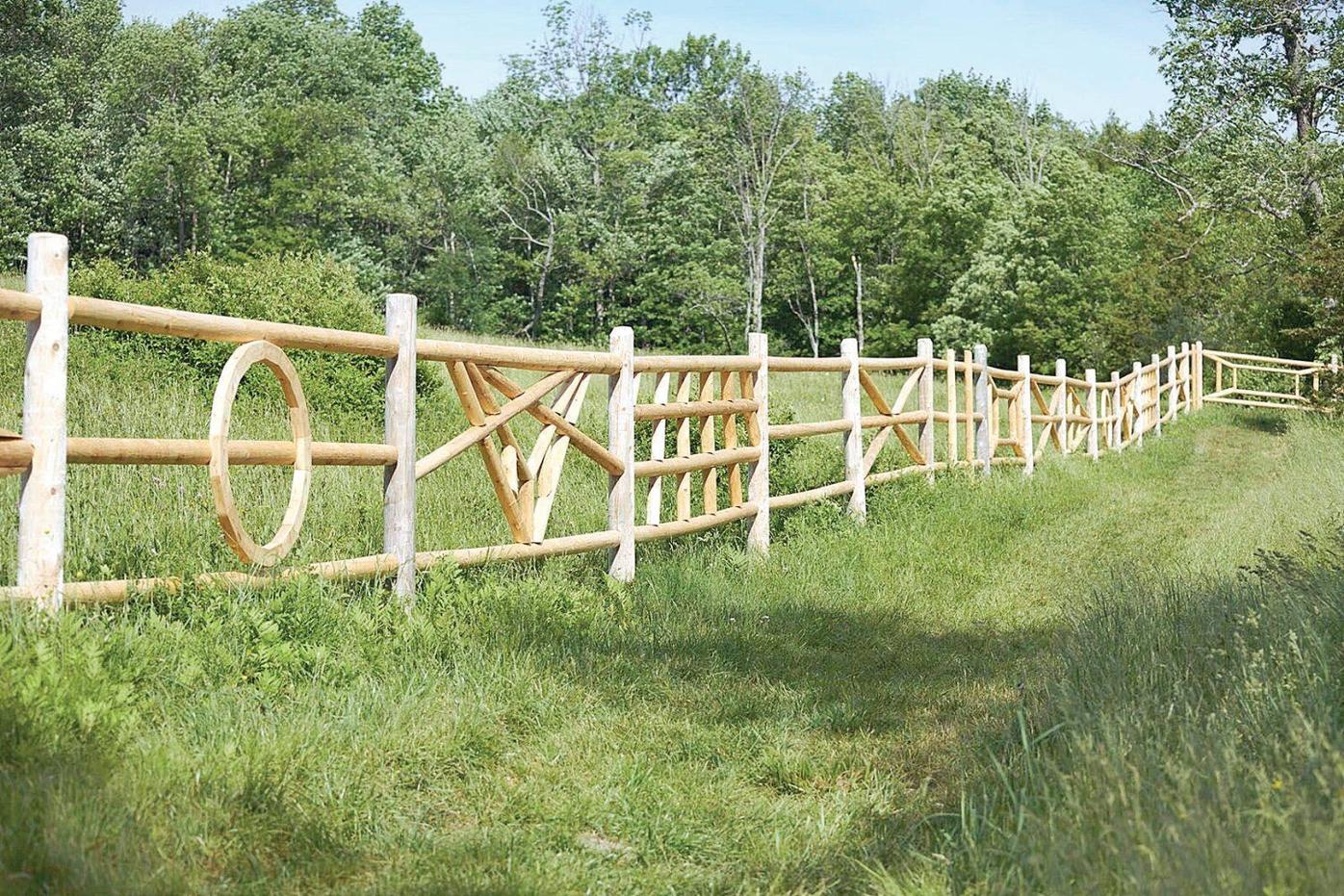 Los Angeles-based artist Analia Saban's cedar fence, "Teaching a Cow How to Draw," was the sculpture of "Ground/work" to be installed.

Artist Jennie C. Jones, who lives and works in Hudson, N.Y., created the sculpture, "These (Mournful) Shores" for the exhibition, "Ground/work."

Kelly Akashi 's "A Device to See the World Twice" is located on the Stone Hill bench trail at The Clark.

Los Angeles-based artist Analia Saban's cedar fence, "Teaching a Cow How to Draw," was the sculpture of "Ground/work" to be installed.

WILLIAMSTOWN — Artist Eva LeWitt spent part of Wednesday, her birthday, in a pasture overlooking the Clark Art Institute where crews were installing her outdoor sculptures, "Resin Towers A, B, and C," as part of the museum's first outdoor exhibition, "Ground/work."

"I wouldn't want to spend it any other way. It's all very exciting," she said. Her work, one of six site-responsive sculptures commissioned for "Ground/work," was the fifth and latest to be placed as part of a rolling installation process forced upon the exhibition by logistical challenges created by COVID-19.

Originally slated to open in June, "Ground/work," will officially open Oct. 6 and run through October 2021. The exhibition, which has been viewable throughout its installation process, began three years ago with an invitation to artists, from guest curators Molly Epstein and Abigail Ross Goodman, to create work that responds to The Clark's unique setting while expressing ideas core to the artist's individual work.

The uniqueness of The Clark's 140-acre campus combined with the open accessibility of the grounds, night and day and at no cost, were part of the impetus for the exhibition, Epstein said. Overall, the exhibition aims to highlight the balance between the fragility and resilience that both nature and the passage of time reveal, while offering fresh experiences with every visit.

Each work began with a visit to the museum to select a site and to explore and respond to the ever-changing environment, Ross Goodman said. Each artist is also pushing herself beyond her own boundaries in some way, whether it be working outdoors for the first time or with a new material.

"What I like about this site is that when you come onto the path, when you look down you can see some really hard lines from the modern [museum] building, but there's also the horizon; there's the trees. There's a little bit of everything in equal amounts — the sky, the sun and the landscape," she said. "I wanted to put these pretty and rigid man-made materials out in this landscape and see how the atmosphere would interact with them: In what light would you see the [Tadao] Ando building more? In what season would you see the trees more? I feel there's going to be a different mix of everything in every different season, even every time of day."

LeWitt, who is based in New York, N.Y., is known for creating works that leverage color, gravity, suspension and volume with a sensitivity to the space her work is created in.

"I've always really responded to the architecture of the spaces that I'm working in. This is like working with an architecture of the mountains and the sky. I wanted them to feel really tall, like they were reaching towards the sky," she said. "I really wanted light to be the third material in this. If these were inside, they would be artificially lit and missing this really dynamic element, which is light and the way that it moves and it changes over the seasons and the day."

Further up the hill, near the back of the Stone Hill pasture, "Knee and Elbow," by Baghramian, an Iranian-born artist living in Berlin, sits in peaceful repose. The pink and white marble blocks, held together with stainless steel joints, are pitted and lined with veins, suggesting the fragility and vulnerability of the human form.

"She was talking about how in both the figurative sculptural tradition, in art history, and in figurative painting, this idea that every human body is putting tension and pressure on our primary joints, our knees and elbows, which no one pays much mind too when they're looking at Degas' iconic dancer," Epstein said. "[She's exploring] this idea that throughout art history, throughout time, what has allowed bodies to stand erect or assume poses are these joints, and what would happen if you excised them from their typical formation and gave them a break; gave them a beautiful vista to survey, gave them a chance to rest."

To express the fragility and vulnerability of the human body, Baghramian chose to work with a new material — marble — in an unconventional way. Instead of presenting the marble smooth and polished, she chose to scar and pit the surface, turning the joints inside out.

Akashi's "A Device to See the World Twice," found on the Stone Bench Trail, is a giant double concave lens supported by several cast bronze branches that make up its base. Reminiscent of a giant magnifying glass, the piece beckons the viewer to observe the immediate surroundings in the clearing, both in its natural state and in a new frame. Originally the work framed a mature ash tree, but a few months prior to the sculpture's installation it fell and broke apart during a storm.

Akashi, of Los Angeles, was unfazed by, what she called, "the uncontrolled chaos of the environment."

"She said this chance event exemplified precisely her interest, which is how do you use a form, like a lens in the glasses she wears that help her navigate the world, to think about how a lens in the landscape would help people better understand the environment around them," Ross Goodman said.

Jones, of Hudson, N.Y., also working out-of-doors for the first time, works in a modernist and minimalist vernacular that includes both visual and audial works, and reframes art history and music to include Black voices.

For her work, "These (Mournful) Shores," she drew inspiration from two Winslow Homer's seascapes, part of The Clark's permanent collection, "Eastern Point" and "Prout's Neck," which she interpreted as portraits of the Middle Passage, the journey of enslaved people across the Atlantic Ocean from West Africa to the "New World."

Her work, a contemporary version of the Aeolian harp, created from powder-coated aluminum, cherry wood and harp strings, is attached to and extends the granite wall parallel to the museum's reflecting pool. The colors of the sculpture reference the color palette of the Homer paintings, while the wood is a direct reference to the American furniture in the museum's decorative art collection.

Nearby, Saban's modified cedar-wood fence, "Teaching a Cow How to Draw," draws visitors from the museum proper to the entrance of the Stone Hill pasture. The fence, the first piece to be installed, incorporates six segments that demonstrate six different historical theories of perspective and artistic composition, including the rule of thirds, the golden ratio, and two-point perspective.

With the fence, Saban, an Argentine artist living and working in Los Angeles, challenges the viewer's definition of what is and what is not a work of art, while seeking to include the cows, which graze within the pasture, as part of the museum's collection.

Yang, an artist who lives and works in Seoul and Berlin, has created a three-part piece, "Migratory DMZ Birds on Asymmetric Lens," that places three 3D-printed resin birds native to the Demilitarized Zone, atop stone pedestals milled by a robotic arm. The birdsong of these birds were the only audible sounds, besides the clicks of cameras, recorded during a private conversation held between the leaders of North Korea and South Korea in the Demilitarized Zone in April 2015.

Yang's work will be installed at the end of September.

After a summer of art openings, picnics on the Tanglewood lawn, nights at the theater and dining al fresco, a stroll through one of the many outdoor sculpture shows on view in the Berkshires may be the right activity to help you unwind and ease into fall. But don't wait too long to see them, as many of them will be gone by mid-October.