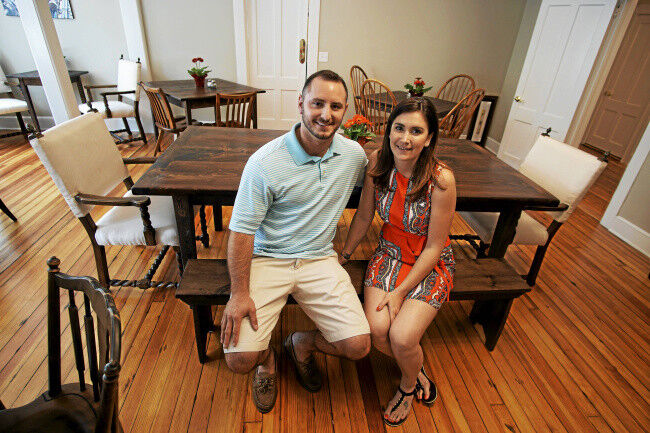 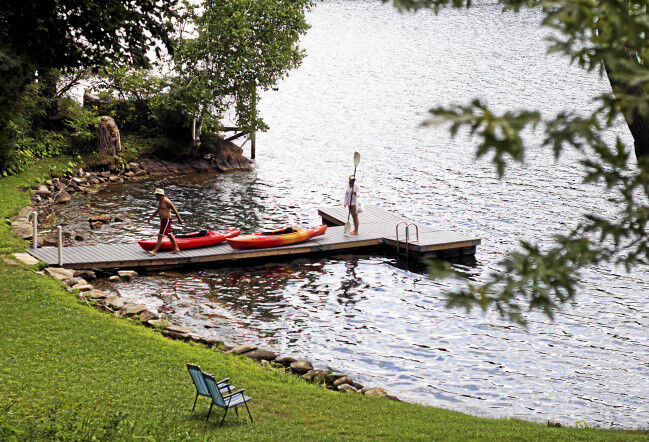 A couple prepares to go kayaking at the Lakeside Inn in Lee, Friday, August 12, 2016. Ben Garver — The Berkshire Eagle | photos.berkshireeagle.com 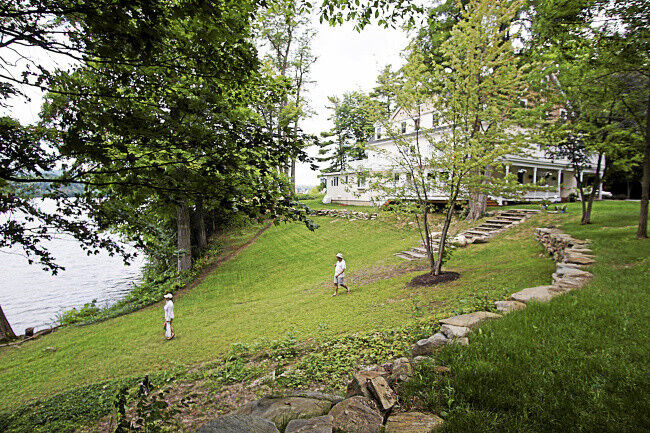 Guests at the Lakehouse Inn in Lee head to the lake to relax, Friday, August 12, 2016. Ben Garver — The Berkshire Eagle | photos.berkshireeagle.com 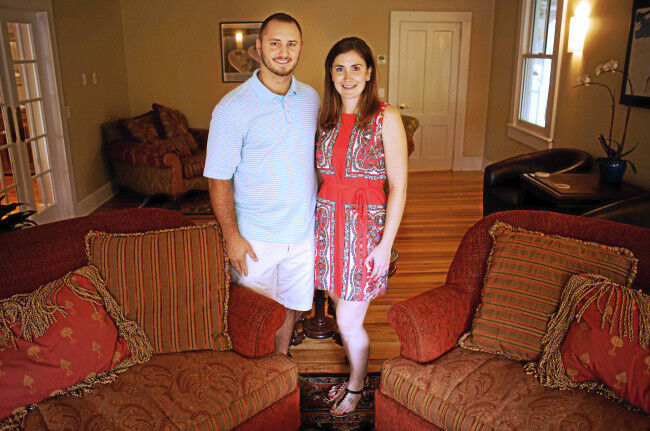 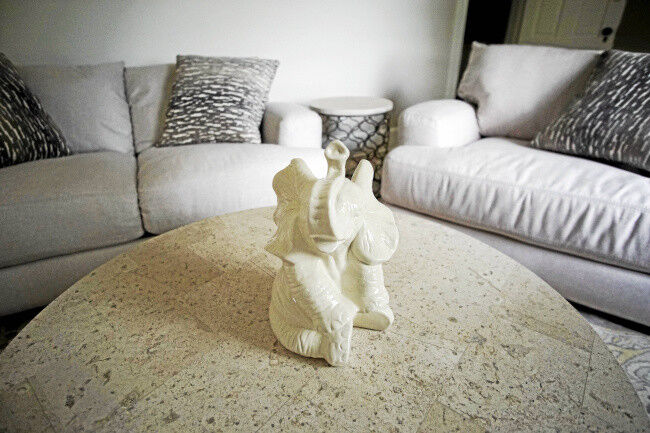 Each room at the Lakehouse Inn on Laurel lake has been remodeled by owners cody Gavin and Maggie Barry, providing a unique environment for each guest. Friday, August 12, 2016. Ben Garver — THe Berkshire Eagle | photos.berkshireeagle.com 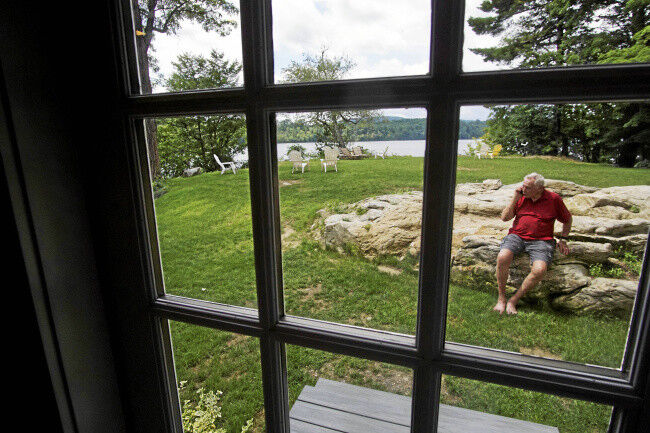 Jack Weisel, a guest at the Lakehouse Inn in Lee, sits on an outcrop outside the inn, Friday, August 12, 2016. Ben Garver — The Berkshire Eagle | photos.berkshireeagle.com

A couple prepares to go kayaking at the Lakeside Inn in Lee, Friday, August 12, 2016. Ben Garver — The Berkshire Eagle | photos.berkshireeagle.com

Guests at the Lakehouse Inn in Lee head to the lake to relax, Friday, August 12, 2016. Ben Garver — The Berkshire Eagle | photos.berkshireeagle.com

Each room at the Lakehouse Inn on Laurel lake has been remodeled by owners cody Gavin and Maggie Barry, providing a unique environment for each guest. Friday, August 12, 2016. Ben Garver — THe Berkshire Eagle | photos.berkshireeagle.com

Jack Weisel, a guest at the Lakehouse Inn in Lee, sits on an outcrop outside the inn, Friday, August 12, 2016. Ben Garver — The Berkshire Eagle | photos.berkshireeagle.com

LEE — As guests open the front door to the LakeHouse Inn, they immediately see Laurel Lake through the kitchen back door — a view created by new owners Maggie Barry and Cody Gavin.

The innkeepers moved the door out of necessity while creating a most welcoming entrance into the 116-year-old historic lodging that reopened two months ago following extensive renovations and a name change.

LakeHouse Inn harkens back to Laurel Lake House, as it was first known, with the original clapboard facade exposed and refurbished to the look of nearly a century ago. The name change and restored exterior were part of the 20-something couple's $1.2 million renovation and preservation of the tourist stop at 615 Laurel St., along Route 20 near the Lee/Lenox line. The price tag includes the $585,000 the young entrepreneurs paid for the property more than a year ago.

Barry and Gavin had hoped to be ready for reservations before Memorial Day weekend, but the mid-June opening was worth the wait.

"It wasn't a mad rush more a consistent pace to finish the work," Gavin said. "We didn't want to open incomplete."

Once they began taking online reservations, the innkeepers were off to a good start.

"We didn't think we'd be this busy right away; we've been booked solid on the weekends," Barry said.

Off-weekend business is picking up, with the inn hosting a two-day sold-out corporate retreat recently; overall, it's a 40 percent weekday occupancy rate for the 16 rooms, according to the couple. They also have their first wedding reception scheduled for mid-September.

Guests arriving on a recent weekend — several discovering the inn for the first time — were impressed by the home away from home.

"Everything done has been in good taste — it's that Scandinavian simplicity" said Patricia Gercik from Cambridge.

Wendy and Jack Wiesel of Great Neck, N.Y., had been Inn at Laurel Lake regulars, so the Long Island couple were thrilled their favorite vacation spot was back in business.

Barry and Gavin are the fifth owners of the lake front inn since it was built by the Boardman family at the turn of the 19th century.

Known as Laurel Lake House when it opened in 1900, the inn reached its heyday after World War II when the inn attracted the Tanglewood crowd, the summer home of the Boston Symphony Orchestra. TD Bank took over the inn from Thomas Fusco and Tara Viola after the financial institution failed last fall to sell it at an open auction.

George Boardman began construction on the lodging house on land his father bought in 1881 that was associated with a block ice business next door, what is now the Cork 'N Hearth Restaurant, according to local archives at the Lee Library.

Upon Boardman's death in 1930, his relatives maintained control of the inn until Arthur Davis bought in 1944, only to sell it three years later to Bernard Morris, a native of England.

Morris, with help from his wife, ran the inn for nearly 50 years, expanding the first floor, installing a clay surface tennis court and removing many original exterior features of the Queen Anne-style architecture, characteristic of several private homes that still exist along Laurel Street (Route 20).

Under Morris' management, the inn drew plenty of summer visitors, many to hear BSO concerts and enjoy the lake.

In 1996, Morris sold the inn to Fusco, who added a deck that overlooks the private beach and rescinded the "no children" policy Morris had instituted when he bought the place.

With help from local contractors, craftsmen and family members, Barry and Gavin gutted the three-story structure in order to strengthen the building's foundation, bring it up to code and creating an elegance many have come to expect from a New England inn.

The beds were custom made to fit each room — at $250-$400 per night for the summer season. A Stephentown, N.Y., woodworker made the dining area tables from old chestnut beams no longer in use at the bed and breakfast.

Several rooms have second floor balconies looking out over Laurel Lake, with a private dock for guests to access the water for kayaking or canoeing or relax on the lawn along the shore. The tennis court area was removed, regraded and turned into a green space.

Except for a weekend cleaning crew and occasional help for special events, Barry and Gavin are the full-time staff, but that could change depending on advance bookings and the season.

The former Pittsfield residents are newcomers to the lodging industry, but they have a hospitality background, albeit in local restaurants. Barry managed Mazzeo's Ristorante for five years and Gavin helped run Mazcot's Sports Bar & Grill for two years, before both left those positions to undertake the rebirth of the inn.

The couple now live and breathe their new careers 24/7 as they reside in the innkeepers quarters, which suits them just fine.

"The best part is we can live here and enjoy the property — no commute," Barry said.