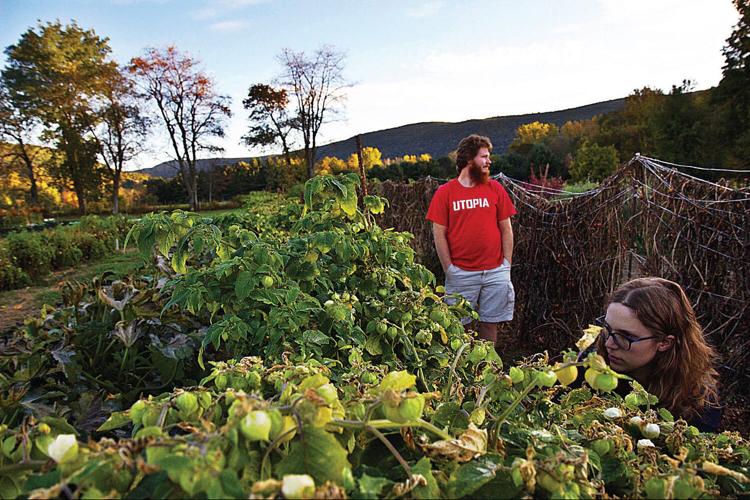 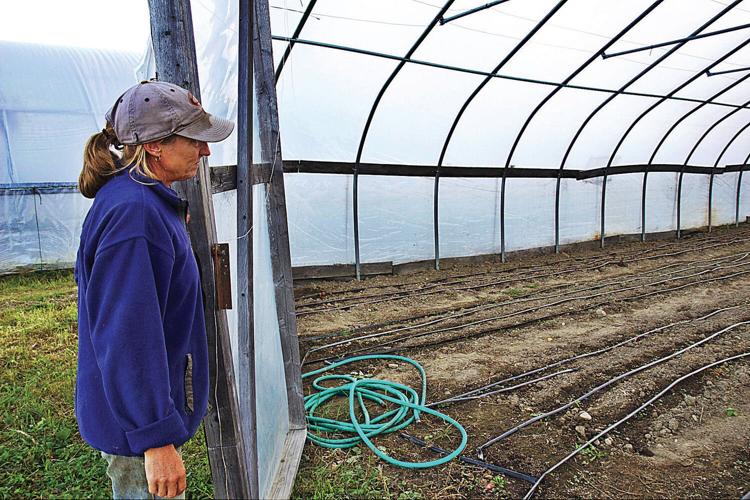 Indian Line Farm operator Elizabeth Keen closes the doors to her greenhouses on the afternoon. Keen and her husband, Alex Thorp, run a CSA on the South Egremont property where the term "Community Supported Agriculture" was first termed by the late Robyn Van En. 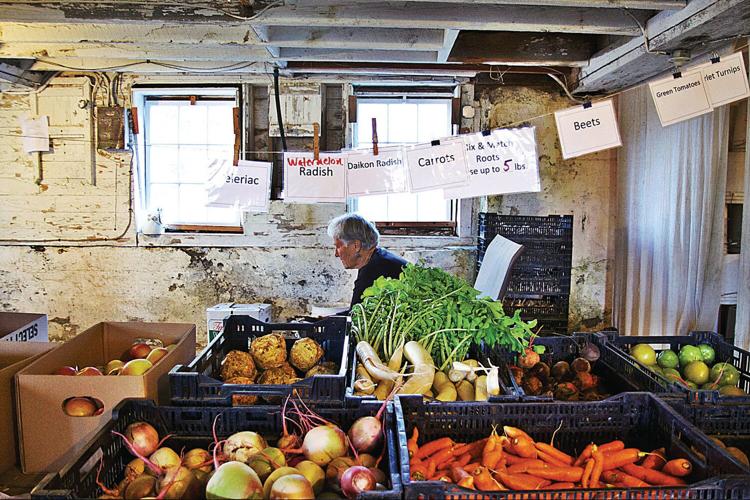 Indian Line Farm operator Elizabeth Keen closes the doors to her greenhouses on the afternoon. Keen and her husband, Alex Thorp, run a CSA on the South Egremont property where the term "Community Supported Agriculture" was first termed by the late Robyn Van En.

Editor's note: This is part three of a four-part series exploring the harvest season in the Berkshires, looking at Berkshire County farm operations that embody the past, present and future of local food production in these hills.

CSA members meandered between tables of harvested produce in the old dairy barn and then, wandering down a two-track dirt lane, entered the fields to pick husk cherries and flowers.

After she shut her greenhouses for the night, farmer Elizabeth Keen tended to the pear butter cooking in her kitchen. Her daughter Helen, 10, reverted between chomping on not-totally-ripe peppers, plucking fresh raspberries and playing on a swing hung from an enormous maple tree.

This life at Indian Line Farm — admittedly (and not even exaggeratedly) idyllic — was not necessarily the one Keen always envisioned. She arrived in the Berkshires 20 years ago after working for the nonprofit Witness for Peace in Guatemala. She expected to apprentice at Mahaiwe Harvest for a season, gain some farming skills, and then return to Central America.

That's where Keen had seen heavy pesticide use, a diet consisting mostly of beans and rice for lower-income Guatemalans, and an opportunity to better connect people with their food.

But then she fell in love. She met her husband, Alex Thorp, at Mahaiwe Harvest, and she became enamored with the physical nature of farming after her suburban upbringing in Colorado and Texas.

The romance continued when Keen, together with her new partner, stumbled on another opportunity: they had the chance to revitalize the farm where Robyn Van En first coined "community supported agriculture."

In doing so, they could meet a growing demand for direct connection between Berkshires residents and their food.

When Indian Line Farms' original dairy operation shut down and was sold to a developer, Van En bought her 17-acre subdivided parcel.

Shortly after, in 1986, Van En initiated what she called community supported agriculture at an apple orchard just up the street, where people who wanted to join a cooperative could come and pick up shares of fresh, local food. Her friend, Jan Vander Tuin, brought the idea over from Switzerland, after a model in various European countries and Japan.

What started out as 30 shares grew quickly to 150. Keen has old photos showing robust vegetable fields behind Van En's house at the height of the CSA's productivity.

The cooperative faltered due to internal politics near the end of the decade, though Van En would go on to start the nonprofit CSA of North America and to write the "Formula to Create Community Supported Agriculture."

In 1997, Van En died suddenly from an asthma attack. When Keen and Thorp arrived later that year, the property was in disrepair and little farming had been done for years. The pair were novices: Keen had just six months of farming experience, and Thorp, originally an engineer from Washington, had just two seasons.

"We started from scratch," Keen said.

Fortunately, they were entering a place eager for people to take up Van En's legacy. Dairy farms were disappearing, agricultural land was up for sale, and young farmers found a niche in Berkshire County.

"We felt like we were at sort of the beginning of ... local food hungriness," Keen said.

In their first few seasons, Keen and Thorp leased their land on Indian Line Farm and gave out just 12 shares, all of them to employees of Orion Magazine in Great Barrington. In 1998, they signed an agreement that put the land under conservation easement with the Nature Conservancy and in the ownership of the Berkshire Community Land Trust.

That's when the couple began to expand their CSA, first to 30 shares, then to 75, then to 100, and then to where it is today at 140. The marketing practice has generally grown across the Berkshires, with the national agricultural census showing a jump from 15 CSAs in the county in 2007 to 27 in 2012.

Keen said Indian Line Farm, which now has greenhouses to extend its growing season and boost its volume, is still not maximizing the land's ability for production.

"There's still a lot of potential here," she said.

Now it's just a matter of distribution.

The Berkshire Regional Planning Commission identified access to fresh, local food as a need in its 2014 "Sustainable Berkshires" report. Local demand far outpaces local supply, and a map of the county's agriculture shows two dense spots in Williamstown and then in the Egremont-Sheffield area. There's a scattering of farms, and then food deserts, in between.

Operations in the northwest and southwest hot spots, meanwhile, work increasingly harder to sell their product.

"We used to have waiting lists up to 50 people," Keen said. "I have more competition."

She and others in the Berkshires face the dilemma of how to create a system that effectively spreads out local food among local people that doesn't dispense with the direct connection between the two.

"I feel there's a lot of collaboration that can happen," she said.

Looking back at Indian Line farm