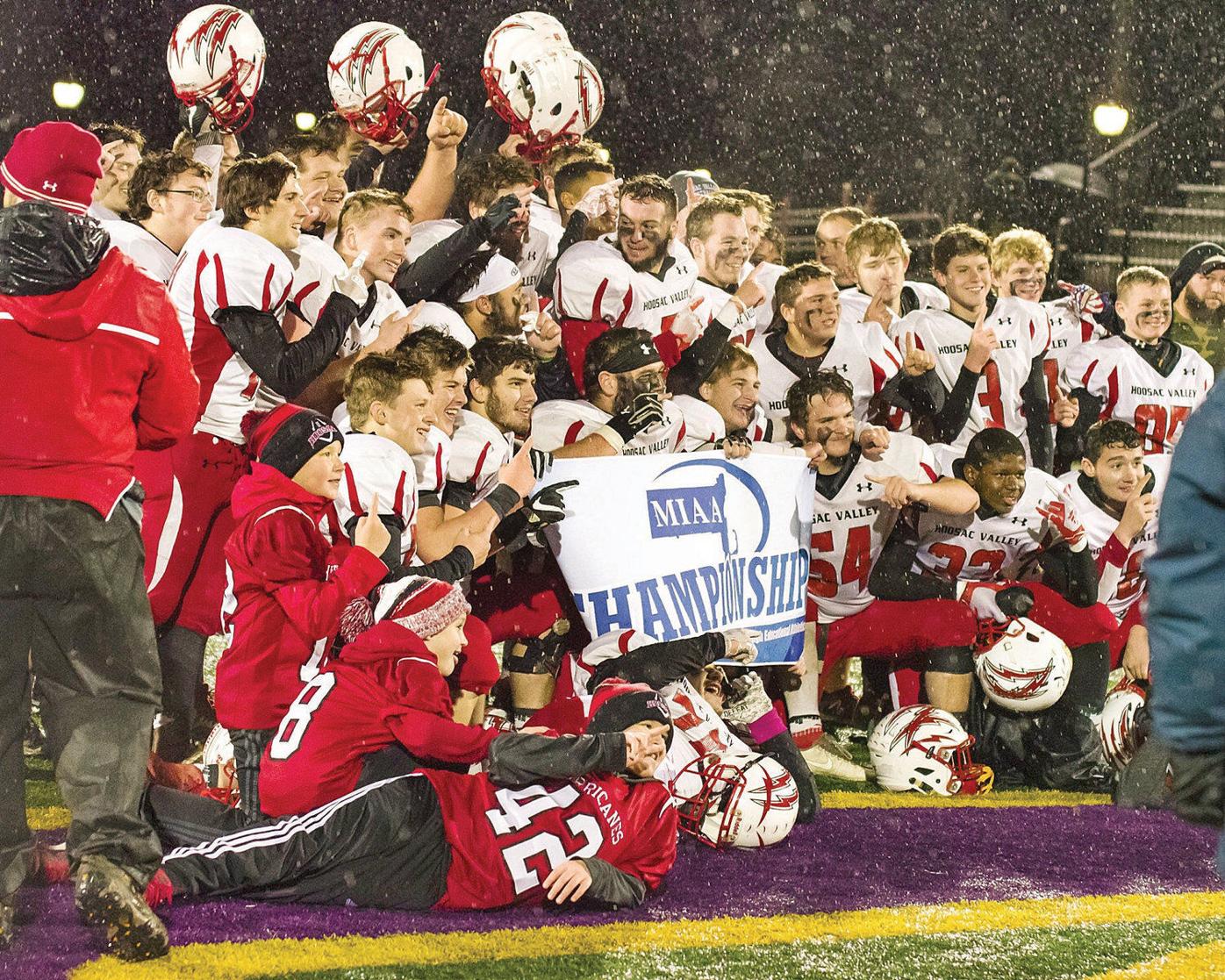 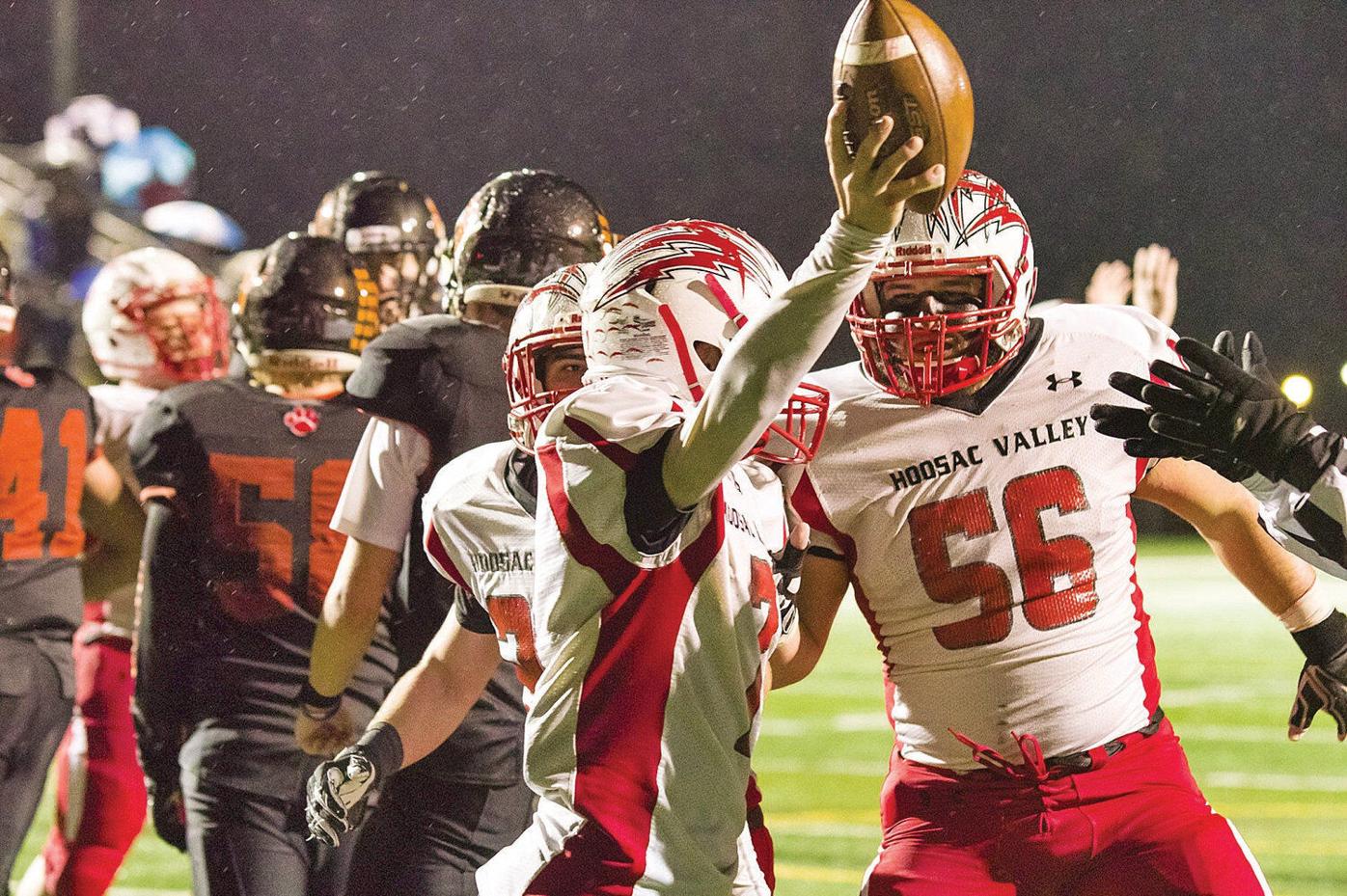 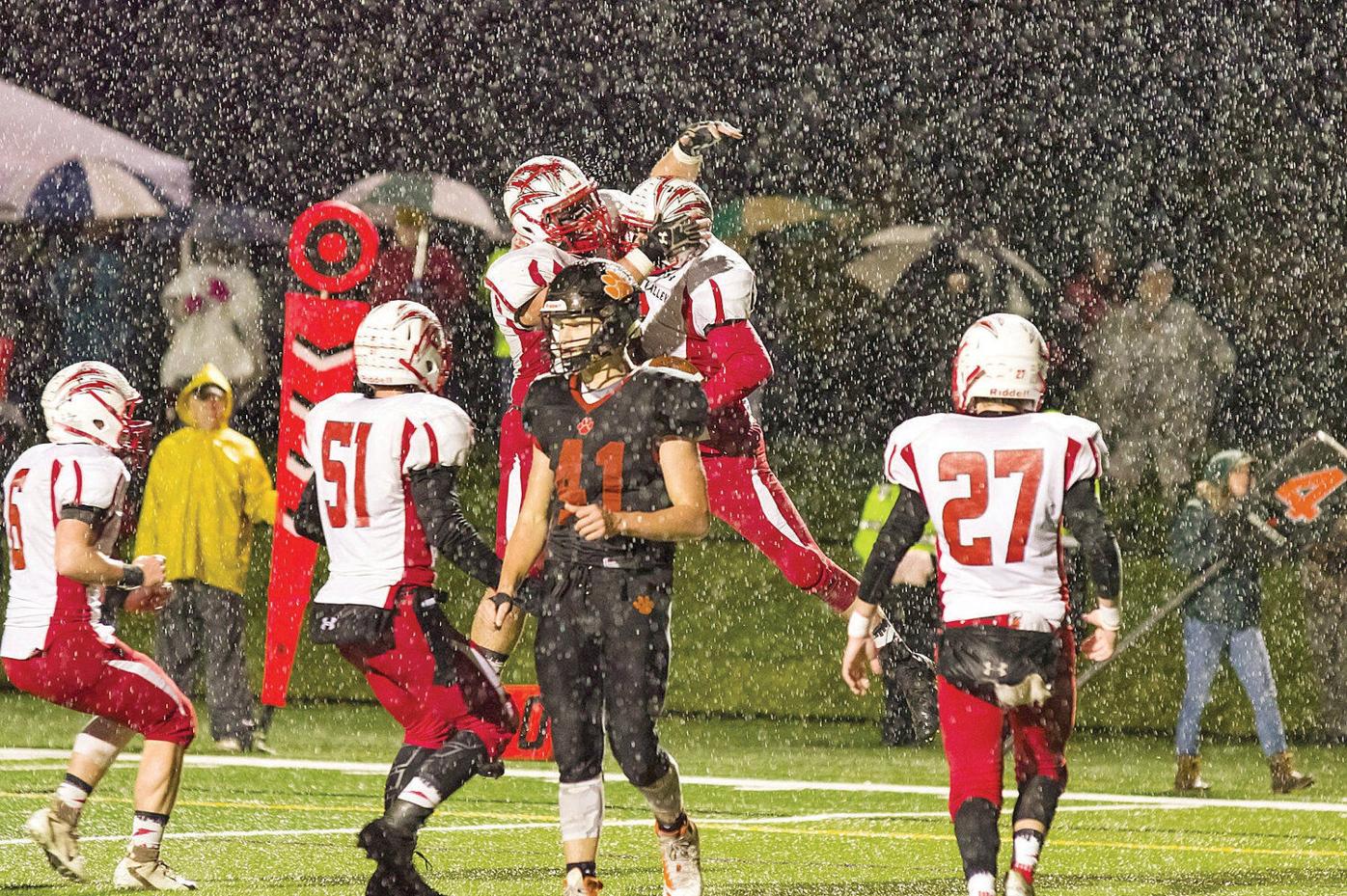 WILLIAMSTOWN — The ball skidded on the wet turf at Farley-Lamb Field, finally coming to rest about 15 yards from the goal line. That was when the Hoosac Valley players and coaches could finally celebrate.

A Lee touchdown in the final minute of the fourth quarter sent the Western Massachusetts Division VIII championship game into overtime. Both the Hurricanes and the Wildcats scored touchdowns in the overtime, but Hoosac made its two-point conversion and Lee did not, giving the Hurricanes a hard-fought 16-14 win in the rain Friday night.

"I looked at everyone and said 'This is our season right here, these two points. If we stop them, we win,'" Hoosac's Justin Meczywor said after Lee quarterback Homer Winston threw an eight-yard touchdown pass to Cole Redstone in overtime.

"The ball was rolling around on the ground, and the whole time, I thought we had it," said Meczywor. "I was screaming 'Oh my God, the ball's still down.' I don't even know what to say, I'm still shook."

It was Meczywor who put the Hurricanes in position to win the game when he scored on a five-yard run on the first series in overtime. Liam Feeley ran the conversion in, making it 16-8. That forced the top-seeded Wildcats to score a touchdown and make the conversion. They got one, not the other, and the third-seeded Hurricanes won their second Division VIII title in as many years.

"It's unbelievable," Hoosac tight end and linebacker Sam Larabee said. "All the hard work we put in the offseason and during the season. Last year, we were a powerhouse team. This year, we had to work more for our wins."

On Friday night, the Hurricanes (7-2) had to work overtime against the Wildcats (8-2), and it wasn't easy for either team.

It was a rainy night in Williamstown with temperatures in the upper 30s. The conditions made it really rough for both teams to get a consistent offense going.

In fact, between the two squads, there were eight fumbles. Lee fumbled five times and lost three of them. The conditions impacted both teams.

"Both teams played in the conditions, so that's not an excuse," Lee coach Keith Thomson said. "We had a few opportunities that we missed. We made a few too many mistakes. Hats off to Hoosac, they did a great job. Our kids stayed in the fight. I'm awfully proud of them to come back and tie it up, and had that shot in overtime.

"It stings right now, but we're real proud of our kids."

Statistically, Lee had the better of things. The Wildcats had 248 yards in total offense to 130 for Hoosac, running 52 plays to 43. Lee did get the ball into the red zone four different times, but did not score until Winston's touchdown run with 57 seconds to play. The touchdown came on a 36-yard drive after a short punt gave the Wildcats the ball on the Hurricanes' 36-yard line.

The other key play of that drive was a six-yard run by JJ Jimenez to convert a big third-down play.

Hoosac did march the ball into Lee territory in those final 57 seconds, but the drive stalled and overtime beckoned.

The Hurricanes got the ball to start overtime, and ran toward the Williams College football building. Lee lined up offsides on the first play, giving Hoosac a first-and-five. In high school football overtime, teams get four downs from the 10-yard line to score.

So on what was now first-and-five, Meczywor took the snap, and with some help from his line and backs behind him, got into the end zone for the touchdown. Feeley's run for the conversion put the Hurricanes up 16-8.

"Coach [Dayne Poirot] looked at me and said 'How's the middle look?' I was like, we can QB sneak it and have my fullback push me in," Meczywor said. "There it was, wide open."

While Meczywor had some help from behind, the Hoosac offensive line got quite the push on the play, knocking the Lee defenders back enough for the quarterback to get in.

Lee got its chance on the 10. Jimenez took a pitch from Winston and gained two yards. Then Winston saw Redstone in the back of the end zone, all alone, and hit him for the eight-yard touchdown. That led to the two-point conversion pitch that never got to Jimenez, and the Hurricanes had their second championship in as many years.

"These kids are resilient. They've had things happen like this all year, and I think that's prepared us," said Hoosac coach Dayne Poirot, who was shivering in the cold. "We've been in some tough football games, and that's been huge."

The first Lee turnover led to Hoosac's first quarter touchdown. Larabee recovered the Winston fumble on the Lee 47-yard line. Eight plays later, Justin Meczywor hit Larabee on an eight-yard touchdown pass. The key play of the drive was a 24-yard swing pass to Feeley on third-and-long, to keep the drive alive.

In the second quarter, Lee had a first-and-goal at the three-yard line, but could not score. The Wildcats followed that up by recovering a Joe Degere fumble on the Wildcat 36. Winston hit Jimenez on a 44-yard pass play. Lee got to the 13, but turned the ball over on a last-second interception by Feeley. Then, in the fourth quarter, Justin Meczywor broke up a pass intended for Ben Harding in the end zone, saving six points. Lee had driven to the Hoosac nine.

That set the stage for the last-minute touchdown and overtime.

"This is the first time it's happened," said Poirot, when asked about winning back-to-back Western Mass. titles in the state championship era. "I think it's great."