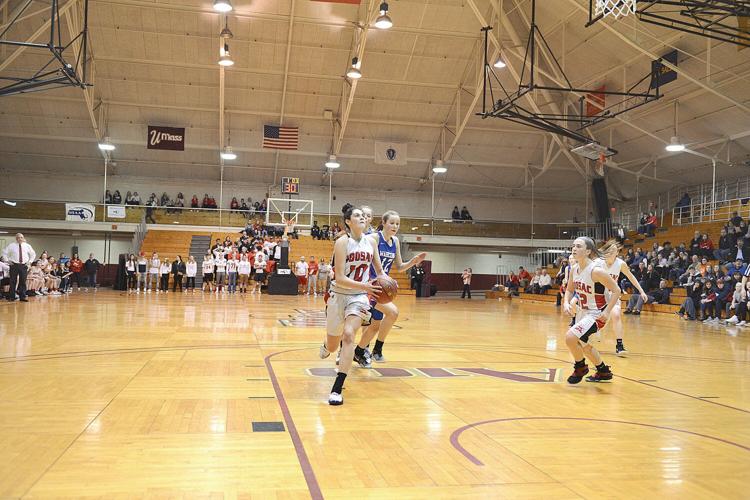 Lexi Mercier leads a fast break for Hoosac Valley at Curry Hicks Cage, where the Hurricanes beat Wahconah in a Western Mass. semifinal. 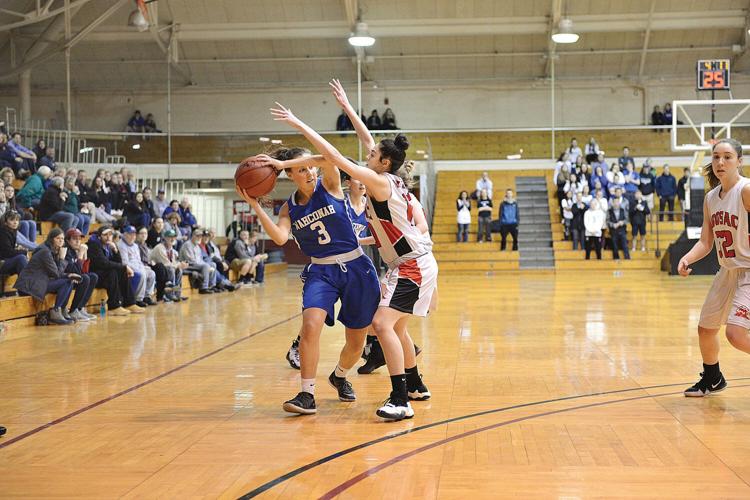 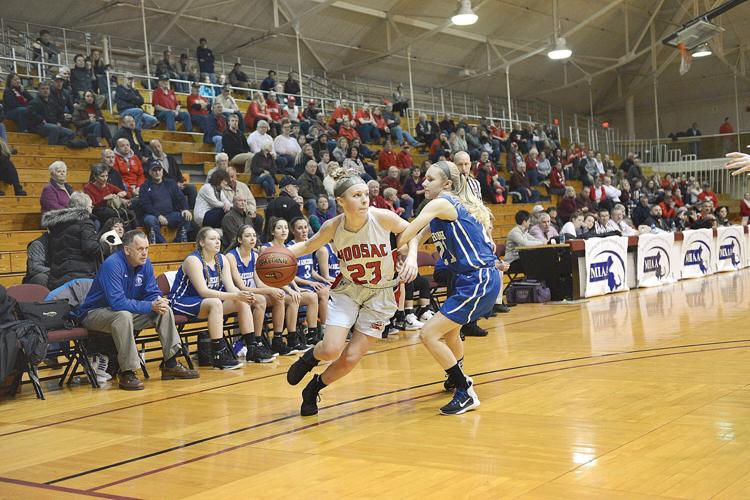 Lexi Mercier leads a fast break for Hoosac Valley at Curry Hicks Cage, where the Hurricanes beat Wahconah in a Western Mass. semifinal.

AMHERST — Revenge is a dish best served from beyond the 3-point line.

After Wahconah knocked the Hoosac Valley girls out of last year's Western Massachusetts Division III quarterfinals, the Hurricanes wasted no time on Wednesday, defeating the Warriors 56-32 and earning a trip back to the tournament championship.

Lexi Mercier, Berkshire County's leading 3-point shooter, and Alie Mendel combined for seven made 3s to lift Hoosac Valley to the win. Mendel finished the evening with a game-high 23 points, but it was Mercier, who ended the night with 21, setting the tone early.

On Wahconah's second possession of the game, Mercier poked the ball free and was fouled racing in for a layup at the other end. The executed and-one gave the Hurricanes a 3-0 lead, kick-starting a wire-to-wire win for.

"Getting a jump on them early really helped us get some momentum," Mercier said. "We knew we would have to play hard and the key of the game was shutting them down. We came out with a lot of energy."

On the following possession, Mendel broke inside and finished at the rim.

With the score 7-1, Wahconah senior Victoria Gamberoni halted the Hurricane momentum with a three-ball.

However, Hoosac Valley's Riley Robinson simply would not allow it. She snagged five, first-quarter rebounds, including three on the offensive end that opened up second-chance opportunities for the Hurricanes.

"We know with the long 3s there are going to be some long rebounds," Hoosac coach Ron Wojcik said. "We tried to send as many as we could to crash the boards. Sometimes the second shot is the one that goes down. It was a big part of the game."

With plenty of opportunities, Mercier and Mendel quickly took over the game, outscoring the Warriors 9-2 to end the first with a 16-6 lead.

The duo helped Hoosac take a quick lead, but they caught fire in the second.

Mercier started the frame by knocking down a 3-pointer, and then Mendel went off scoring the next 11 points, including nine beyond the arc. In a matter of three minutes the Hurricane lead ballooned to 30-8.

The Warriors were forced to take a timeout to figure out how to slow down Mendel's 3-point shooting, but out of the break it was Mercier's turn to light up the scoreboard.

Berkshire County's top marksman scored the half's final seven points to give the Hurricanes a 37-8 lead headed into the locker rooms.

"I feel like us walking in and knowing that this could be our last game makes us work that much harder," Mendel said.

The Warriors ended the season with 19 wins and held their opponents to less than 40 points in 17 games. Wahconah became known for its suffocating diamond-and-one defense, however the team had no answers for Mendel and Mercier at the Curry Hicks Cage.

"[Coach Wojcik] did a great job," Wahconah coach Liz Kay said. "They ran some stuff we've never seen before and had his kids ready to go. If we were off-kilter I give all the credit to them, they did a great job."

The second half began the same way as the first, with Mercier adding three more points to the scoreboard, but this time she did it from beyond the arc.

"I thought we really fought in the second half," coach Kay said. "The ball didn't necessarily go in, but it's easy to play that hard when you're up 20 and not so easy when you're down by 30. I thought we had a lot of fight in us."

While they Warriors were moving, the first-half outburst by the Hurricanes was too much to overcome. The Hurricanes rolled through the fourth quarter en-route to the 56-32 final and a shot at their sixth Western Mass. title in seven years.

"They did a great job taking [Mercier] away when we played at Wahconah," coach Wojcik said. "I told her that the best way to beat their diamond-and-one is to beat them in transition. I thought we got out and ran and it helped them get comfortable. My main concern was that [Wahconah] plays great defense and in order to beat them we had to put points up ourselves."

The Hurricanes will be back at UMass on Saturday to face the fourth-seeded Greenfield Green Wave, who are in the finals for the first time since 1990. Tip off for the championship game is scheduled for 2:15 p.m. at Curry Hicks Cage.

"We'll probably sit down with the coaches [to focus on game plan] on the road home tonight" Wojcik said. "We'll evaluate it as we go into tomorrow and go from there.

"We scouted Greenfield and they're a great team with great players."